There is no one else around, but suddenly the voice of Mike Boateng turns quiet.

‘People were saying they were paid £5,000 for sendings off, they scored own goals,’ he begins.

‘They had a result promised and it wasn’t going the right way so they’ve had to do a madness, like headbutt someone.’

You can forgive the hushed tones. After all, it’s only half a mile from here that conversations along a similar theme landed Boateng a 16-month jail sentence and a lifetime ban from football.

These days, the 28-year-old offers personal training and protection to the likes of Ryan Sessegnon and Callum Hudson-Odoi.

Back in 2013, however, he was a 21-year-old defender at non-league Whitehawk when he met two businessmen hoping to make money on the Asian betting markets. 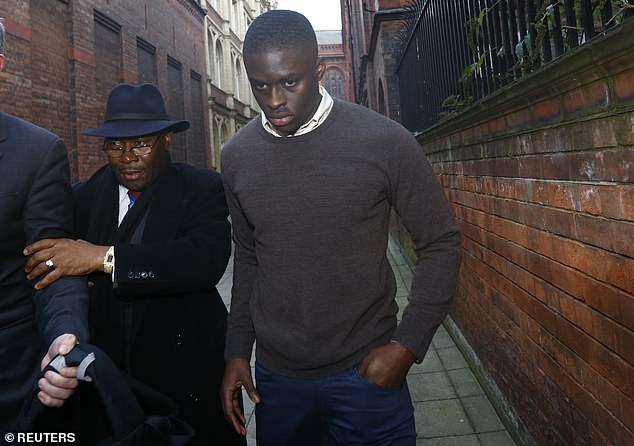 His reward for flirting with the underworld? Infamy. Boateng was the first player convicted in relation to match-fixing in the UK since the 1960s. He was sent down of conspiracy to commit bribery yet beneath the legal jargon lies a tangled web of betrayal, bad decisions and of bad luck.

Only now is normal life emerging back into view. In jail Boateng trained as a personal trainer but after his release he became involved in selling drugs and was sent down for a second time. By the time he’d left lock-up – and served his probation – the country was in lockdown.

Boateng came through at Crystal Palace with the likes of Victor Moses; Wilfried Zaha remains a friend. Now the next generation are among his clients. Sessegnon, Reece James, Ethan Ampadu and Callum Hudson-Odoi turn to him for extra training sessions or a supportive presence.

Many others offer cruel compassion. ‘Loads of people have said “F****** hell, you’re the unlucky one”.’ 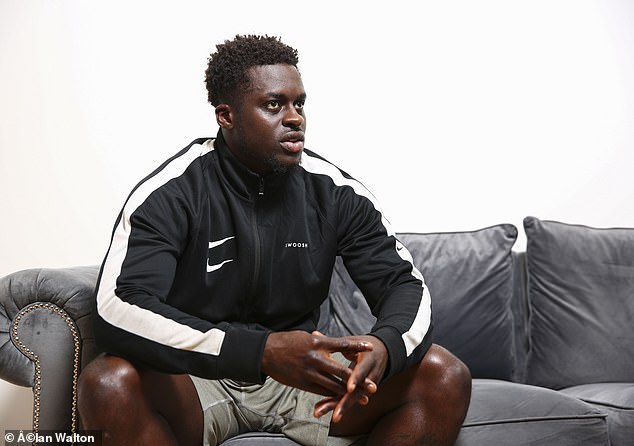 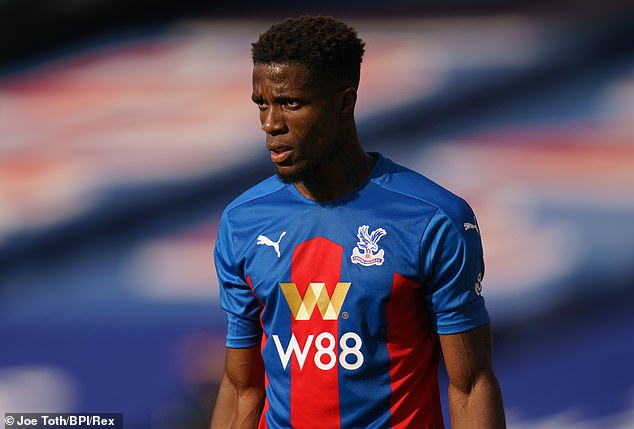 The roots of this story stretch back nearly two decades through the streets of south London.

As a youngster at Crystal Palace, Boateng brushed shoulders with two players who later flanked him in the dock.

One his ‘big brother’, who he says introduced him to the fixers. The other a childhood best friend who – Boateng maintains – betrayed him to save himself. None escaped unmarked after being caught up in a police sting.

By then, Boateng had slipped into non-league – the most money he ever took home was £850-a-week. No small change but enough to resist temptation?

‘There were a lot of people making a lot of money,’ Boateng insists.

‘It was a very apparent thing going on, especially in non-league.’

He adds: ‘You hear about it happening at the top flight. there is a lot of money in it so I wouldn’t be surprised.’

Boateng says he turned down an offer to get sent off earlier in his career. He admits he may have considered something more subtle; he never reached that bridge. 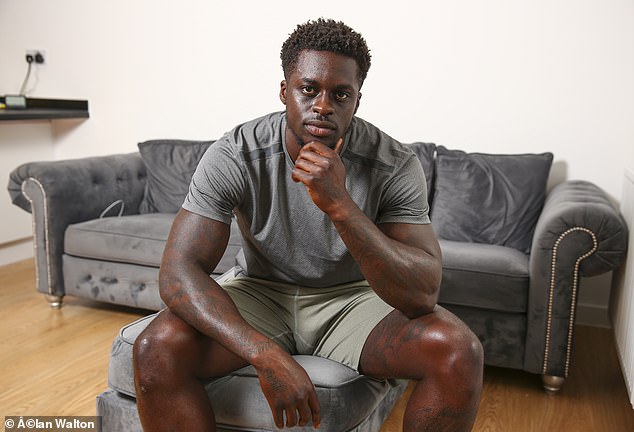 Alongside a team-mate, Boateng met the fixers at East Croydon Station – around the corner from where he now lives – and headed to a coffee shop.

‘We just thought we were meeting these geezers, having a quick chat,’ he says.

‘When we were in the cafe, the two businessmen felt a bid edgy and were looking around like: “We don’t really like it here”.

‘So we left to go somewhere else. Looking back, there were people following them. They obviously had good intuition.’

It was later claimed that an undercover officer, posing as an investor at the meeting, asked Boateng if he would take two yellow cards ‘if this guy says you have to.’

Boateng maintains nothing was agreed and denies that he was given £367 to stay ‘on side’.

‘Leaving the meeting I didn’t really feel edgy or like “What the f*** have I got myself in to,'” he says.

A couple of days later, however, Boateng was arrested. He thought the police had jumped the gun – how could he be punished for attending a meeting? 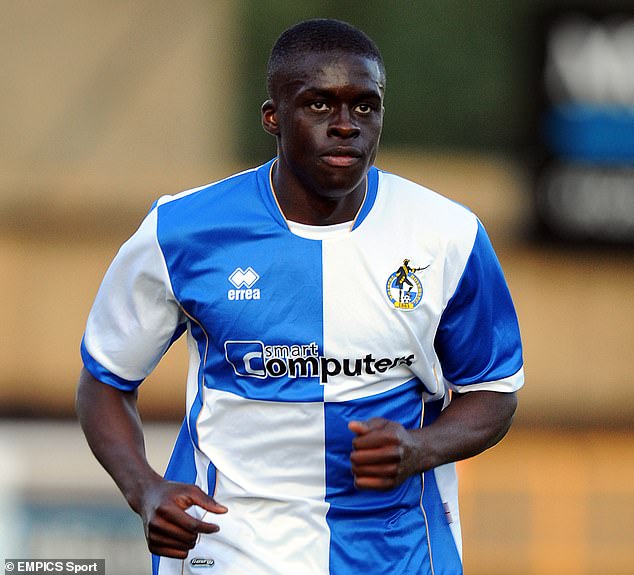 Boateng, pictured playing for Bristol Rovers, was arrested in a police sting after the meeting

‘It just shows how unaware of the law I was,’ he admits.

‘Even when I was on trial… I was saying “how can one player fix a game?”

But Boateng was sacked by Whitehawk and provisionally suspended by the FA.

‘Everyone just washed their hands of me. I was guilty until proven innocent,’ he says. ‘For the whole seven months I was on bail, I couldn’t play football, I couldn’t work basically.’ He could at least take comfort in his company. His co-defendant at Whitehawk had been his best friend since year 7.

‘We were together every day, giving each other strength and confidence,’ Boateng claims. Until the trial, that is.

‘I’ve gone to say hello, he’s put his head down, so I thought: “Something isn’t right here”.

The original accusations were thus: the players were recruited by the businessmen as part of plans to fix two matches. Though that plot failed, Boateng and Co were charged with conspiracy to defraud bookmakers. 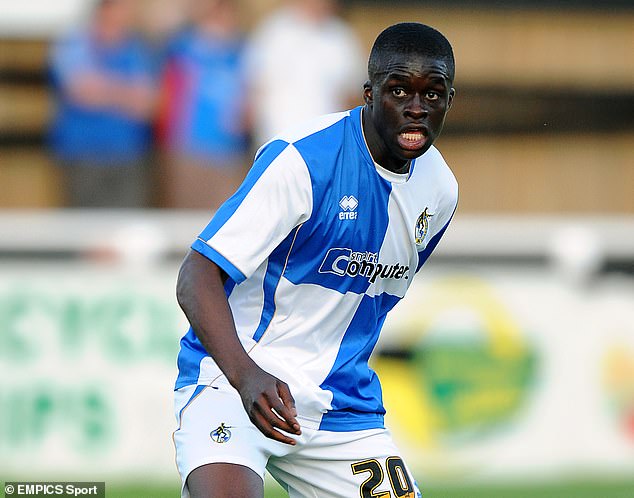 After a six-week trial, the businessmen were jailed, so was Boateng. The twist? He was ultimately convicted of conspiracy to commit bribery after it was alleged he tried to recruit his best friend, who was acquitted after claiming he knew nothing. The pair have not seen each other for around six years.

‘That was the main thing I learned… it wasn’t going to jail, it was about trust and betrayal,’ Boateng says.

‘But I’m over it. this person knows who he is, he knows I’m out here enjoying my life and I’ve heard he’s not really.’ How so?

‘I’ve heard that when people see him, he looks very scared and worried. That’s no way to live – I wouldn’t wish that on anyone. I don’t have a problem with him – people crumble under pressure.’

Prison provided plenty of time for reflection. And to change course.

Alongside playing football (‘a couple of times boys would try their best to leave one on you’), Boateng trained as a personal trainer and formed unlikely friendships. Together with fellow inmate Rob and prison lawyer Claire, he has detailed the tedium of jail on a brilliant new podcast, Banged Up. 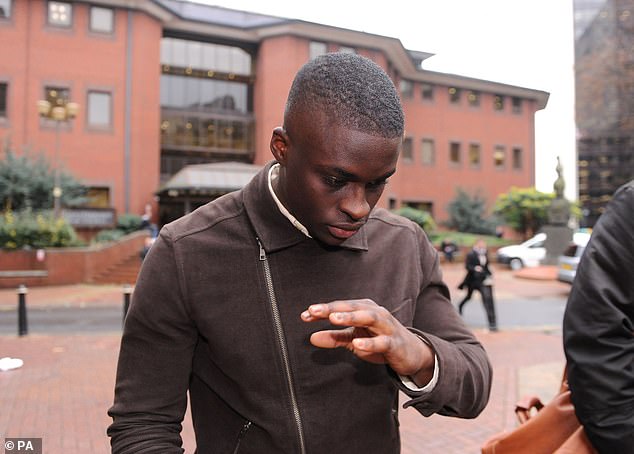 After his sentence, Boateng has been banned from all football activity in the FA’s jurisdiction

By his release, he had turned his back on football but was nevertheless charged by the FA. Keen to avoid more time in the spotlight, he accepted the charge. The next day he saw on Sky Sports News that he’d been given a lifetime ban. FIFA later extended it across the world. ‘Ridiculous,’ he says. ‘They probably wanted to set an example.’

For context, none of the three Pakistan internationals convicted of spot-fixing at Lord’s were banned for more than 10 years (five suspended) and only Salman Butt was jailed for longer than Boateng.

All three returned to cricket. Boateng recently resumed friendly kickabouts, too, but he is banned from all football activity under the FA’s jurisdiction. That can include Sunday League or even five-a-side.

‘It’s like I’ve killed someone on a football pitch,’ he says. ‘I’m not trying to act like I’ve not done anything. but for going to a meeting about match-fixing, where nothing was agreed and nothing happened and no money was made, to get a lifetime ban is a bit of a raw deal.’

He could have few complaints when the police came knocking for a second time. 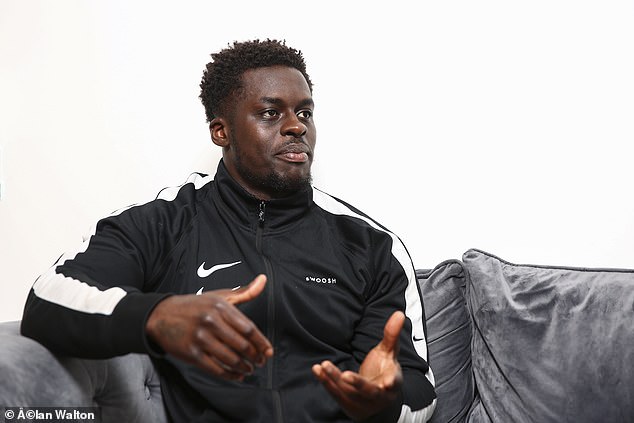 In search of a quick quid after his release, Boateng began growing weed and selling drugs.

When officers raided a grow farm, they found his fingerprints on a pot.

That earned him another spell in prison; only earlier this year did he come off licence.

Throughout it all, some within football kept in touch and now Boateng trains a swelling network of players and their families.

He mentors England internationals future and present. Alongside the strength and conditioning? Life lessons from prison.

‘As a footballer – and I learnt this is jail – you have to be comfortable on your own,’ he explains.

‘Footballers train for like an hour and a half a day, the rest of the day you’re on your own and a lot of footballers get up to no good in that time.’ 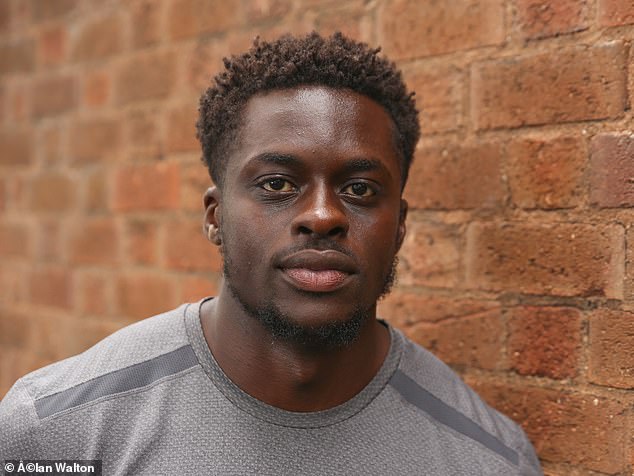 In his cell, Boateng would meditate, read books and list personal goals. Many of the starlets now follow suit.

Boateng also trained in personal protection after leaving prison. So he accompanies players on holidays and on nights out.

‘It’s not even so much to protect them, it’s more a presence around them so they feel safe, they feel comfortable,’ he explains.

The main dangers? ‘A lot of girls try to get in their rooms. A lot of footballers get robbed for their watches (and) making sure that if they’re out drinking, no one is really videoing them.’

It has its perks. ‘Normally we go to Marbella every year, we go to Ibiza, this year we were meant to go to LA.’

The young stars are ‘fascinated’ by his brush with the law. It’s a shame no one in authority seems to be. No club or FA member has been in touch to discuss using Boateng’s experience to warn. 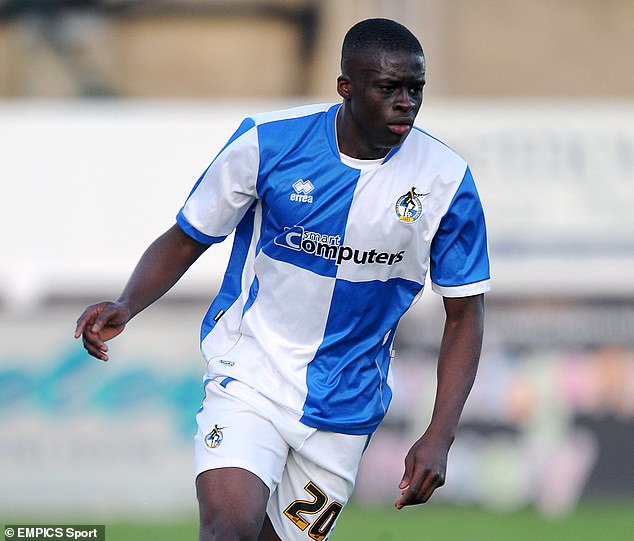 Given how coronavirus is threatening so many players’ livelihoods, surely the game is ripe for manipulation.

Even before this crisis, Boateng had been told fixing persists.

‘Sometimes when I watch football and I see weird things happening, I just think: that’s a bit fishy,’ he says.

So why didn’t those same red flags fly before that fateful meeting?

‘My (thinking) was: what’s the worst that can happen? Obviously the worst did happen.’