MICHAEL BURLEIGH: How Trump’s warmonger in chief is trying to drag the US into conflict with Iran

If anyone still doubts just how dangerous war with Iran would be, they should listen to yesterday’s warning from General David Petraeus, a former head of the American military’s Central Command and a past CIA Director.

Such a venture, he said, would be perilous – and he is right.

Iran, remember, bears little comparison with Iraq, which collapsed so readily in the face of British and American troops. Iran is four times bigger than its neighbour.

If anyone still doubts just how dangerous war with Iran would be, they should listen to yesterday’s warning from General David Petraeus, a former head of the American military’s Central Command and a past CIA Director. Above: Iranians set fire to a US flag in 2018

It is a major nation with 80 million people, 450,000 battle-hardened troops and a huge stockpile of weapons, not to mention heavily armed regional proxies such as the Hezbollah militia on the Lebanese border with Israel.

And with the oil-supply route from the Persian Gulf at obvious risk, the effects of conflict would be felt right around the world.

And now there is talk of a shooting war, with the Pentagon reliably said to be preparing for conflict.

The US recently sent four B-52 strategic bombers to the region. An American aircraft carrier heading for the Gulf has been told to speed up its voyage.

As yet, the guns have remained silent, but with tension rising by the day, America and Iran are enveloped in the sort of fog that leads to open warfare should bluffs be called or mistakes made. 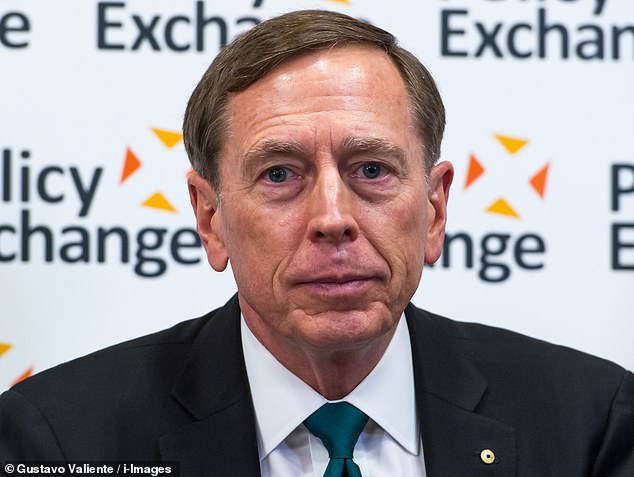 Such a venture, Petraeus (pictured) said, would be perilous – and he is right. Iran, remember, bears little comparison with Iraq, which collapsed so readily in the face of British and American troops. Iran is four times bigger than its neighbour

There is no shortage of pretexts. Just last week, four empty oil tankers – three Saudi Arabian and one Norwegian – were sabotaged off the coast of the United Arab Emirates as they loaded up.

A major Saudi oil pipeline designed to bypass the Strait of Hormuz was attacked by drones carrying explosives.

The House of Saud claims Iran was to blame, but without any evidence. It seems just as likely the attacks were conducted by forces actively seeking to engineer a showdown.

America has drawn up a colourful charge sheet against Iran, including claims that the ruling mullahs are close to developing nuclear weapons, that the regime sponsors world terrorism and that it actively threatens American troops in the region.

Just a few days ago, Israel’s Mossad intelligence agency alleged that Iran is planning strikes against US bases in neighbouring Iraq.

None of this bears scrutiny, however. Take, for example, the claims about Iran’s nuclear programme.

The international community was aghast when the White House unilaterally pulled out of the 2015 deal, a major agreement which brought an end to international sanctions in return for Iranian guarantees it would not develop nuclear weapons. Trump described the treaty as a ‘disaster’.

Yet Iran had stuck to its side of the bargain, a point confirmed 13 times by the International Atomic Energy Agency.

Then, when it comes to terrorism, America has ignored the fact that Iranian-directed Shia militias and Iran’s militant ally Hezbollah have been bulwarks against the Islamic State, fighting in parallel with coalition troops in Iraq and Syria.

Even so, Trump has designated the entire 125,000 strong Iranian Revolutionary Guard Corps – an arm of the Iranian state itself – as a terrorist organisation. 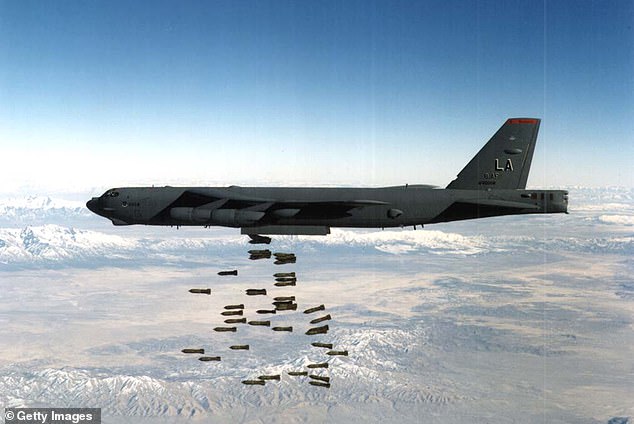 The US recently sent four B-52 strategic bombers to the region. An American aircraft carrier heading for the Gulf has been told to speed up its voyage

As for the Israeli claims that Iran is menacing American soldiers in Iraq, the US Congress has demanded to see proof.

The Iraqis themselves dispute the Mossad claim, as does the British deputy commander of coalition forces in Iraq, Major-General Christopher Ghika. What, then – or who – is behind this reckless series of threats and actions?

While the American President is certainly complicit, the real blame lies elsewhere. Trump is against going to war, and especially in the Middle East.

While it is true that he makes a great deal of noise when it comes to foreign affairs, much of it aggressive, he was elected by American voters who were sick of the blood and treasure squandered in Iraq and Afghanistan.

Instead, the driving force is an unlikely alliance of Israel, Saudi Arabia and the United Arab Emirates (UAE), with the support of John Bolton, Trump’s 70-year-old National Security Adviser.

The Saudis and Emiratis want to crush Iran, which they see as the major danger to regional stability. 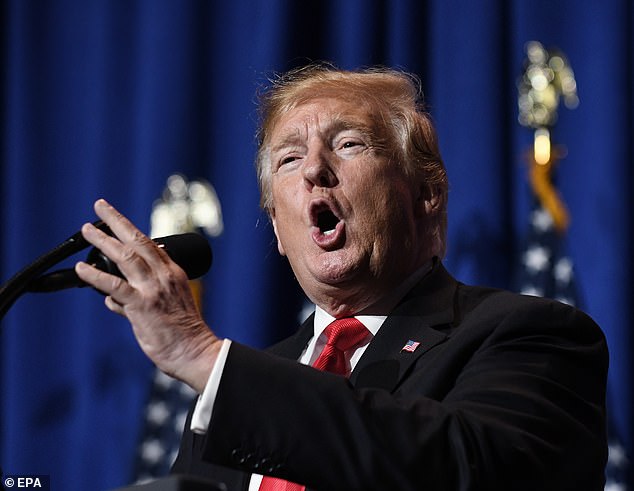 Trump has designated the entire 125,000 strong Iranian Revolutionary Guard Corps – an arm of the Iranian state itself – as a terrorist organisation

These autocratic Sunni monarchies feel menaced by a Shia Islamic republic, which not only promotes a rival brand of Islam, but whose tentacles now reach into Lebanon, Syria, Iraq and Yemen, where Iranian-backed Houthi rebels are engaged in a long-running and bloody insurgency.

Israel, too, regards Iran’s theocratic regime as a threat, and points to the hostile presence of Hamas in Gaza and Hezbollah in Lebanon.

Above all else, the Israelis have sought to prevent Iran developing nuclear weapons. Before the 2015 nuclear deal, they used cyberattacks – notably the Stuxnet virus – to cripple Iranian nuclear plants, and they assassinated key Iranian engineers and scientists.

Now Israel, Saudi Arabia and the UAE have the whole of Iran’s civilian (and entirely legitimate) nuclear infrastructure in their sights. They wish to destroy it altogether.

But for that they need the help of US air and sea power as Israel lacks the aerial refuelling tankers needed to conduct long-range raids against multiple targets.

And in American National Security Adviser John Bolton they have a true friend. Bolton, a Vietnam draft-dodger like Trump, is an ultra-hawk on most foreign policy questions.

He loathes international organisations and insultingly describes Europeans – including us – as ‘Euroids’.

Attacking Iran with sanctions is not enough for him: Bolton wishes to overthrow the regime, just as his fellow neo-conservatives were able to do in Iraq.

Will the Iranian regime fall as Saudi Arabia hopes and Bolton privately predicts? Will it come meekly to the negotiating table? Of course not.

Trump’s threats and sanctions have shown every sign of rallying ordinary Iranians to their flag. The response will be quite different.

Iran is now likely to abandon the nuclear restraint it agreed in 2015, making the world a more dangerous place as a result. It will no doubt attempt to draw Russia – an ally in the Syrian conflict – into this dangerous standoff. 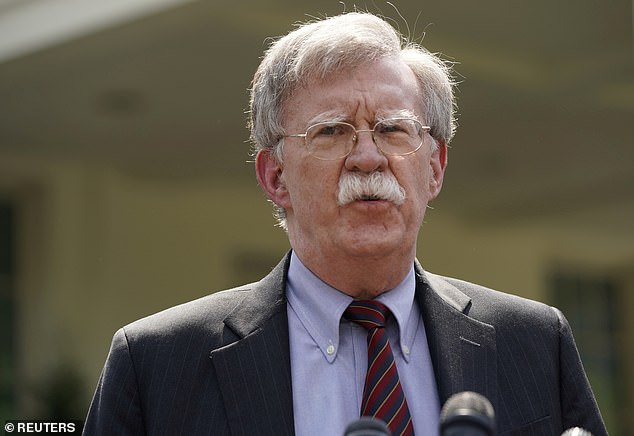 In American National Security Adviser John Bolton Israel have a true friend. Bolton, a Vietnam draft-dodger like Trump, is an ultra-hawk on most foreign policy questions

Russia’s President Putin has explained to Iran that he can’t act as a fire-fighter in every single conflict, but it is worth noting that many of Iran’s nuclear technicians are from Russia.

Will Putin install his impressive S400 missile defence system to protect Russian citizens there, not to mention his own regional influence?

The Iranians will certainly hope so. Then there is the question of Hezbollah.

Time and again, Israel has shown itself capable of containing missile attacks launched across the border from Gaza by Hamas.

But missiles fired from Lebanon by Hezbollah – a large, professional army with up to 150,000 missiles – would be a very different prospect.

In the event of war between America and Hezbollah’s Iranian paymasters, few doubt that such attacks would follow.

The stakes in this electrifying power struggle are high for all of us, not least the hard-pressed citizens of Iran. 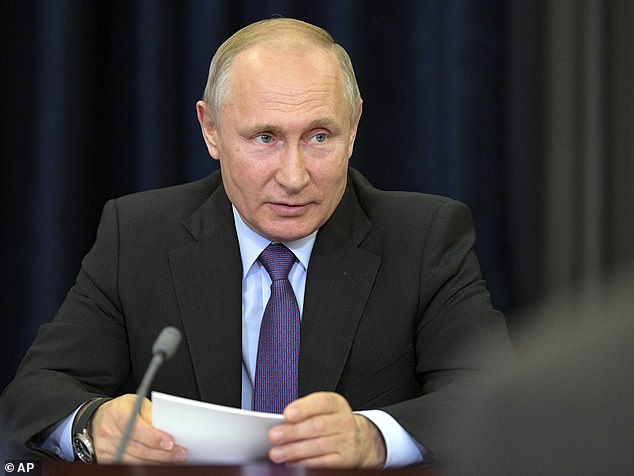 War would bring chaos to the Persian Gulf, the world’s most important shipping route for oil, and send the price of crude shooting through the roof.

It rose by more than a dollar a barrel after last week’s sabotage on the UAE coast. Global recession would soon follow.

I have rarely seen such a blatant example of foreign powers determining US policy as in these despicable attempts to push America into firing on Iran – or of aggression towards a state that has successfully dismantled a nuclear weapons programme.

Here in Britain, we should recall the wisdom of Harold Wilson who correctly defied Lyndon B Johnson and refused to get involved with the disastrous adventure in Vietnam.

It is time for Trump to call a halt, to end this slide towards potentially catastrophic conflict and give warmongering Bolton the boot.

Michael Burleigh is Engelsberg Chair of History and International Affairs at LSE IDEAS.