MICHAEL BURLEIGH: Will this air disaster be Ayatollah Ali Khamenei’s very own Chernobyl?

Will Iran’s shooting down of jetliner prove to be the Ayatollahs’ very own Chernobyl? MICHAEL BURLEIGH asks if the regime’s lies will sow the seeds of its downfall

By Michael Burleigh for the Daily Mail

A few days ago the country was united in grief and anger against Donald Trump as crowds mourned the dead General Qassem Soleimani. Now Iranians have taken to the streets to protest against their own regime, and shouts of Death to America have been replaced by Death to the Dictator – by which they mean Iran’s own Supreme Leader Ali Khamenei.

It is an extraordinary turn of events. The regime’s callous incompetence as well as its willingness to lie about events which led to the deaths of 176 innocent people when Iranian forces shot down a Ukrainian jet shortly after takeoff from Tehran have led to outrage across the country.

Having claimed that the three-year-old airliner crashed because of mechanical failure or pilot error, top officials had to admit that it had been shot down by a Revolutionary Guard surface-to-air missile. Speaking in the Iranian parliament, the head of the Revolutionary Guard said ‘I wish I was dead’.

Following the death General Qassem Soleimani, Iranians have taken to the streets to protest against their own regime (pictured on January 12)

But the admission came three days too late – following official denials and an attempted cover-up. Even as Tehran was using bulldozers at the crash site, Ukrainian investigators found the nose of the missile, the roof of the cockpit with a hole through it, as well as tiny shrapnel punctures in the passport of a Canadian victim.

Social media did the rest, first revealing the truth then, increasingly, anger. Not even the Great Firewall of Persia, as Iran’s electronic censorship is called, could block every website or revelatory post.

The anger is not just focused on whichever uniformed incompetent fired the missile at what he imagined was a US cruise missile, but also at the Revolutionary Guard, and at President Rouhani and Supreme Leader Khamenei who say they did not know what was happening. Hardly impressive, given that Khamenei is Iran’s commander-in-chief. 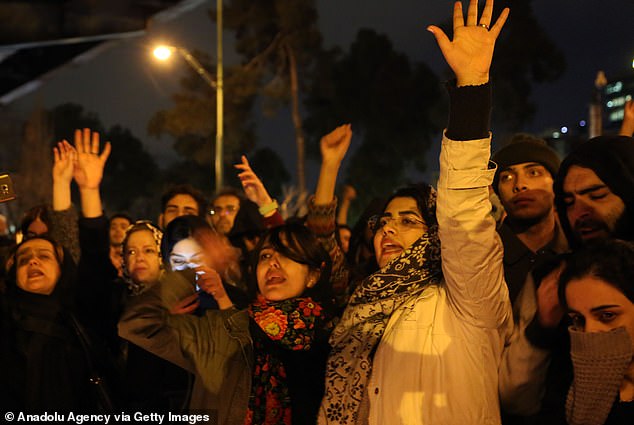 The local residents replaced shouts (pictured on January 11) of Death to America with Death to the Dictator – Iran’s own Supreme Leader Ali Khamenei, in the latest anti-government protest outside Amirkabir University in Tehran

The reason for the regime’s newfound contrition is not difficult to find. There has long been simmering anger against it, with protests across small-town Iran for the past year about food and fuel price rises.

Rulers have not been able to deliver the supposed benefits of the 2015 international deal – now abandoned by President Trump – in which Barack Obama agreed to lift economic sanctions in return for Iran agreeing to limit its nuclear activities.

The food and fuel protests could be repressed – about 1,500 people have been shot dead in 2019-20 alone, with their bodies secretly carted off so as to avoid the funerals becoming pretexts for more demonstrations. 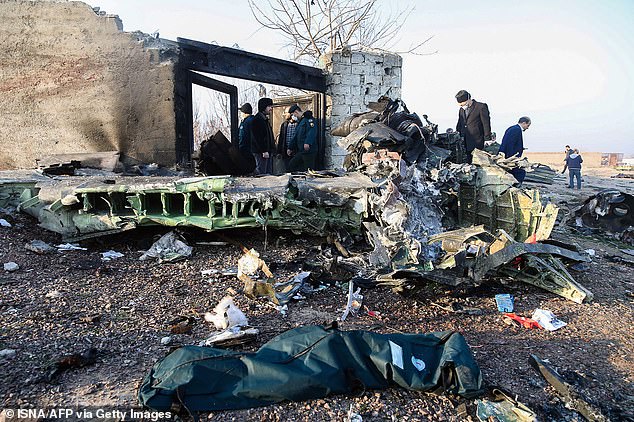 Outrage has broken out across the country after its callous incompetence and willingness to lie about events led to the deaths of 176 innocent people. Pictured are people standing near the wreckage after a Ukrainian plane carrying 176 passengers crashed near Imam Khomeini airport in Tehran, sparking fresh alarm in the Middle East

But the new protests will be more difficult to control. The lies about the air disaster have comprehensively undermined what is left of the clerics’ moral authority, and this just before elections next month. The regime is always keen to advertise electoral turnout. But this time many may refuse to vote for people who have forfeited any claim to trust.

Trying to lie your way out of a disaster is never a very good strategy for any government.

The meltdown at the Chernobyl nuclear reactor in 1986 saw the Soviets trying to suppress any evidence that this catastrophe was due to a fundamental design flaw. This official deceit contributed to the implosion of the Soviet Union four years later. 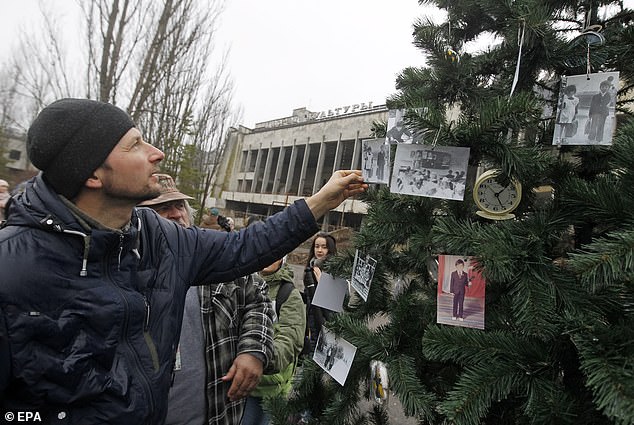 People share tributes to family and friends who died during when the Unit 4 reactor at the Chernobyl power station blew apart in 1986. The Soviets tried to suppress any evidence that the catastrophe was a design flaw and this deceit contributed to the implosion of the Soviet Union four years later

The downing of the Ukrainian airliner and subsequent cover-up may not have such dramatic repercussions. But there is no doubt they present a stern challenge.

Each time one of the victims of Flight 752 is buried will present an opportunity for mass protest. Even conservatives in Iran are furious, with one woman MP vowing to write thousands of anti-war slogans on every coffin.

Khamenei will want to ensure the protests do not create a tipping point for the regime itself. Whether the elderly Supreme Leader can manage it is another matter.

Michael Burleigh is Engelsberg Chair of History and Global Affairs at LSE Ideas.