Michael Clarke took his four-year-old daughter Kelsey-Lee to pre-school this morning after announcing his separation from his wife Kyly.

The former Australia cricket captain, 39, and his wife of seven years reportedly broke up in September but kept their $40million split secret until announcing it last night.

This morning Clarke left his $12million marital home in the exclusive Sydney suburb of Vaucluse and drove their only child Kelsey-Lee to pre-school as he usually does.

Wearing gym clothes, a cap and no wedding ring, he was seen arriving at the daycare centre and helping Kelsey-Lee out of his four-wheel drive BMW. He carried her pink school bag and held her hand as he dropped her off.

There was no sign of Mrs Clarke, 38, who last night shared the first snaps of herself without her wedding ring as she worked out in the gym.

Clarke, who married the former model in 2012 after splitting with his fiance Laura Bingle in 2010, told fans in his 2016 autobiography that he always feared getting divorced. 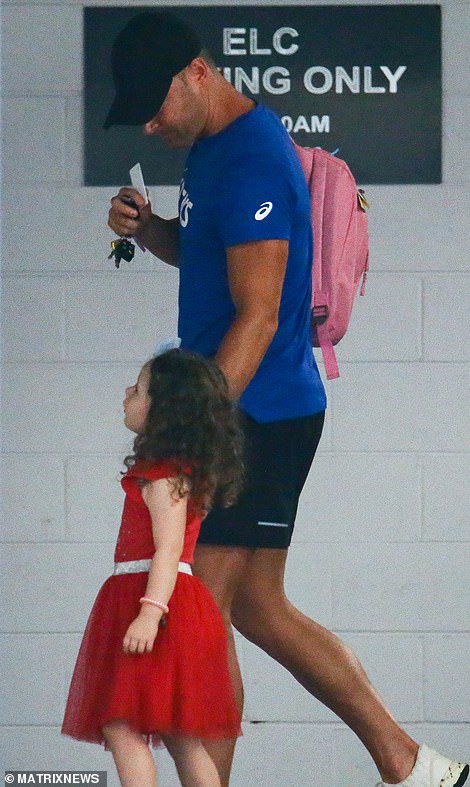 Life goes on: Michael Clarke took his four-year-old daughter Kelsey to pre-school on Thursday morning after announcing his separation from his wife Kyly. Pictured: Clarke arrives at pre-school with Kelsey 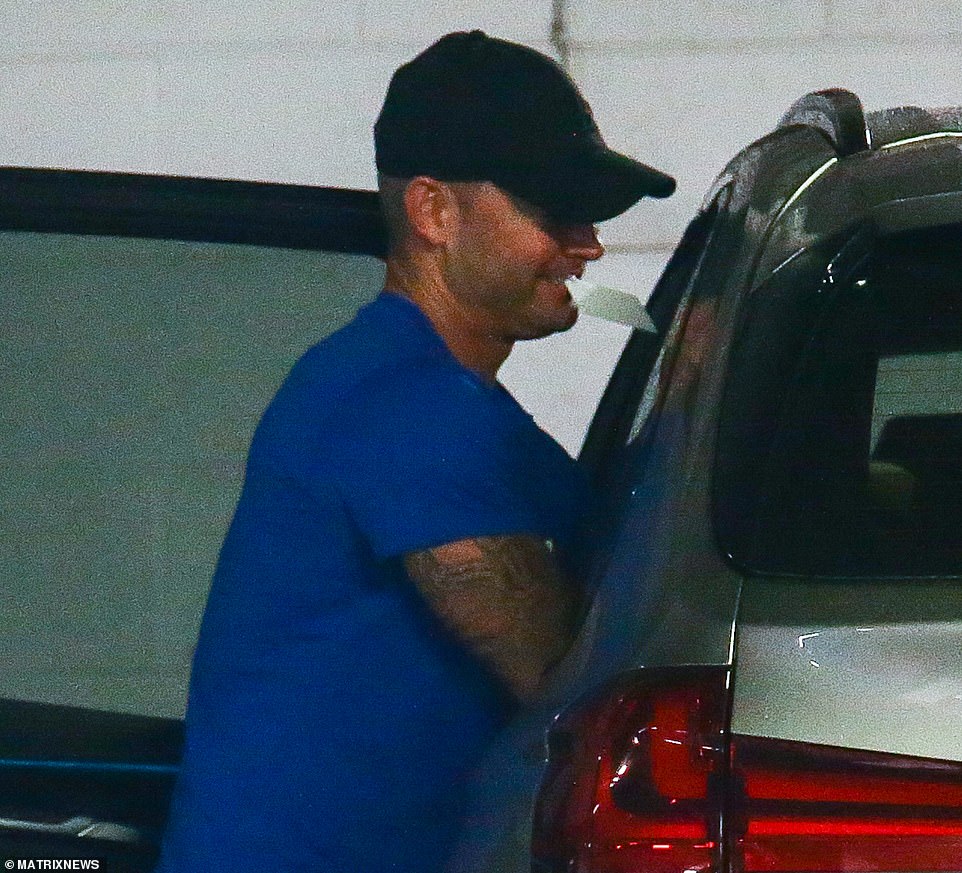 Daddy duties: On Thursday morning Clarke left his $12million marital home in the exclusive Sydney suburb of Vaucluse and drove Kelsey to pre-school as he usually does. Pictured: Clarke arrives at pre-school with Kelsey-Lee 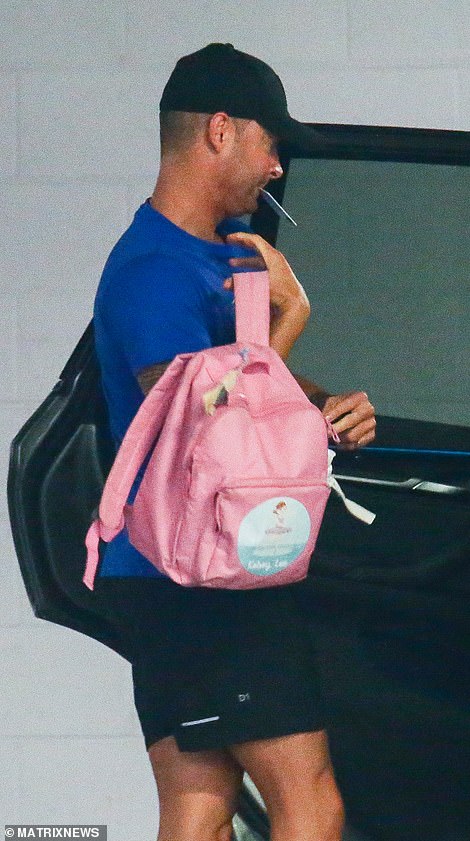 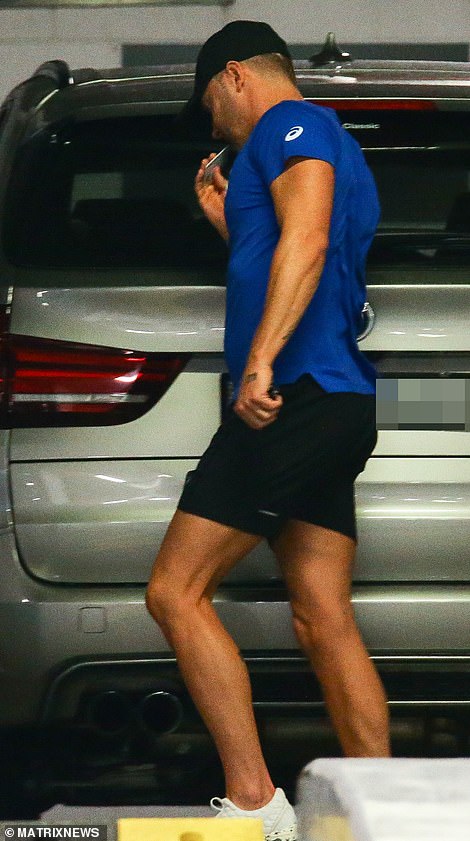 Loving father: Wearing gym clothes, a cap and no wedding ring, Clarke was seen arriving at the daycare centre and helping Kelsey out of his four-wheel drive BMW. He carried her pink school bag and held her hand as he dropped her off 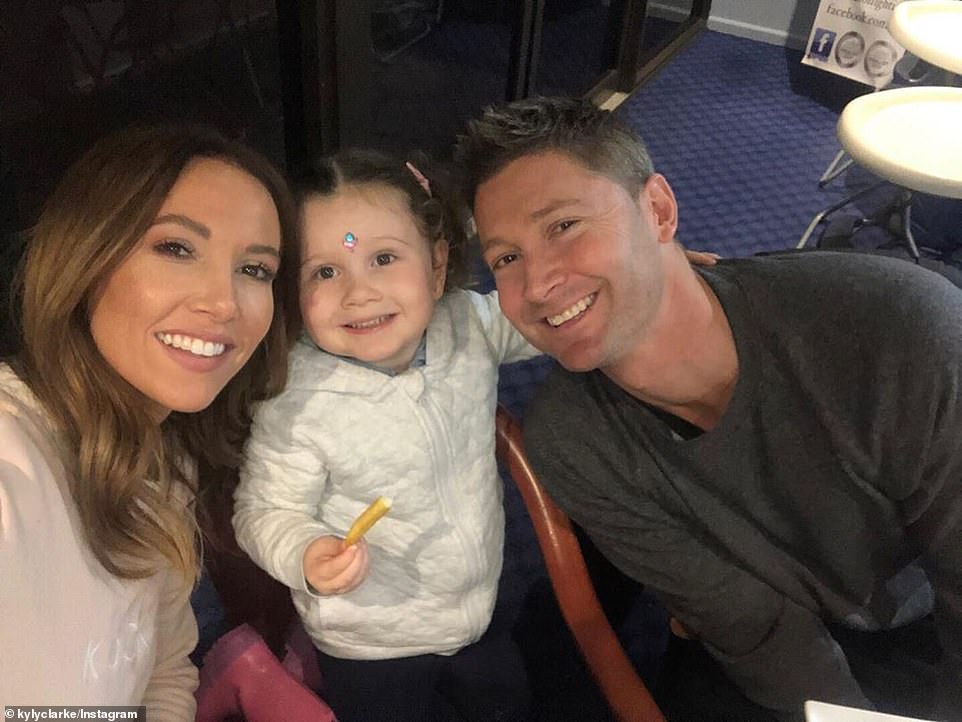 The former Australian cricket captain, 39, and his wife of seven years reportedly broke up in September but kept their $40million split secret. The couple are pictured with daughter Kelsey- Lee in happier times 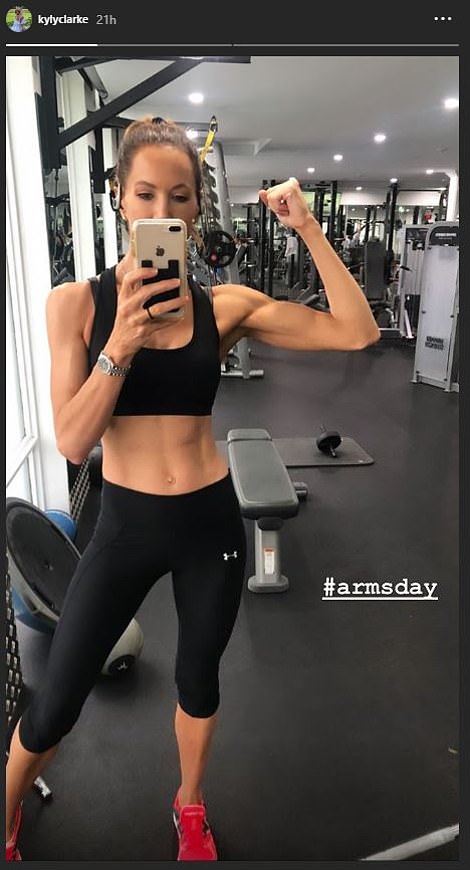 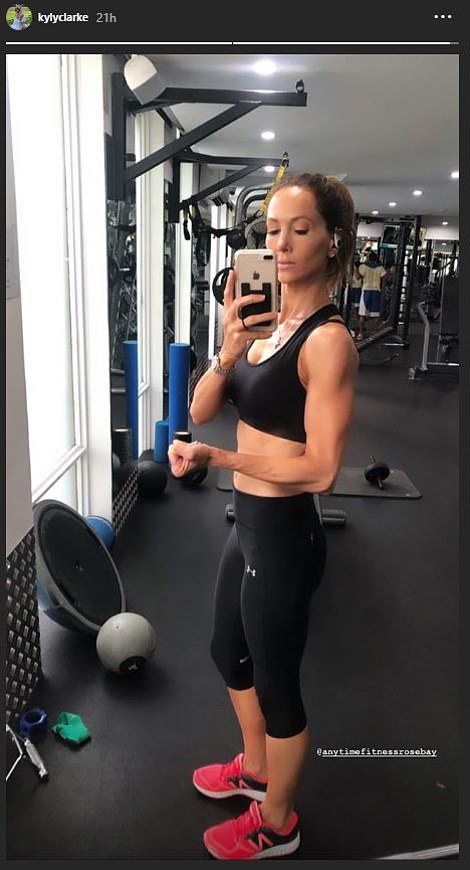 Kyly Clarke, 38, last night shared the first snaps (above) of herself without her wedding ring as she worked out in the gym 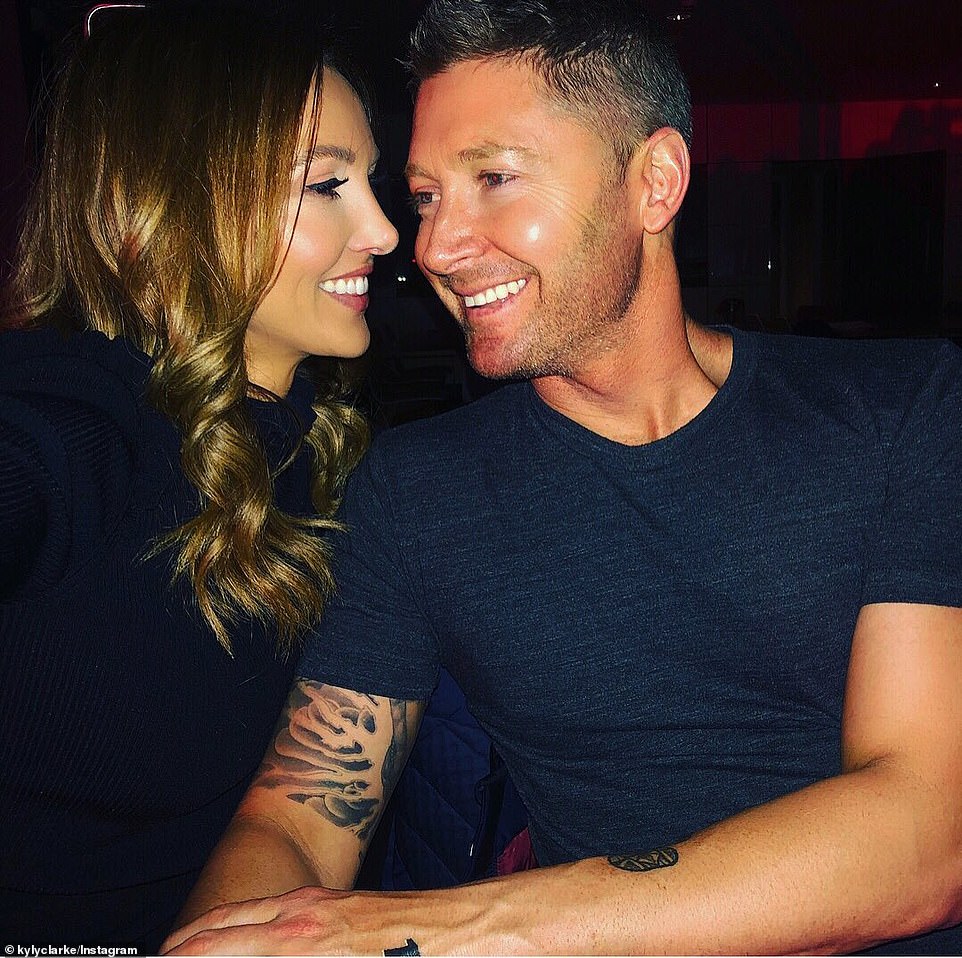 He told how his parents Les and Debbie broke up after 25 years and this made him doubt whether he could ever hold down a relationship.

‘Their break-up affected me to the core,’ Clarke wrote. ‘When I split up with my then fiancee Lara Bingle in 2010, part of the undercurrent in my thinking is that if a couple like Mum and Dad can’t make it, what hope have I got?

‘I don’t even want to start a serious relationship if it’s going to end in a separation. Mum and Dad are my heroes, and their marriage has always been a kind of gold standard for [my sister] Leanne and me.

‘I can’t imagine myself measuring up to my parents’ partnership. How can I do it, if they can’t? It takes me a long time to get over that fear.’

Clarke and Kyly went to high school together but were not friends until they connected on Twitter after his split with Miss Bingle. He said he spoke to Kyly about his fear of divorce during the early stages of their romance.

The couple announced their split, estimated to be worth $40million, in a statement to The Australian newspaper on Wednesday.

The high-school sweethearts said the ‘amicable’ decision was ‘the best course’ for their daughter.

The news has shocked the nation after Kyly told the Daily Mail in January 2019: ‘We’re not, never were and never will be splitting.’

According to the Australian, the couple separated five months ago. However, until last night, Mrs Clarke, 38, has continued to wear her wedding ring and pose for happy family photos in an effort to keep up appearances. 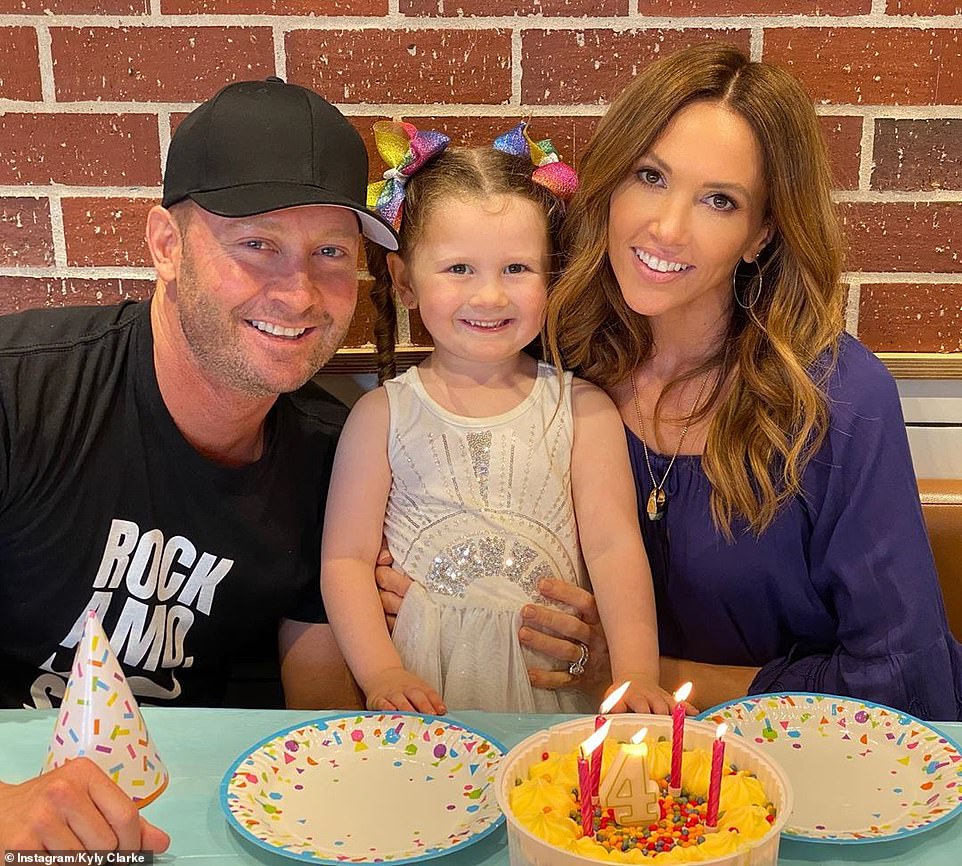 The pair are pictured at their daughter Kelsey Lee’s fourth birthday party in November. Kyly was still wearing her wedding ring 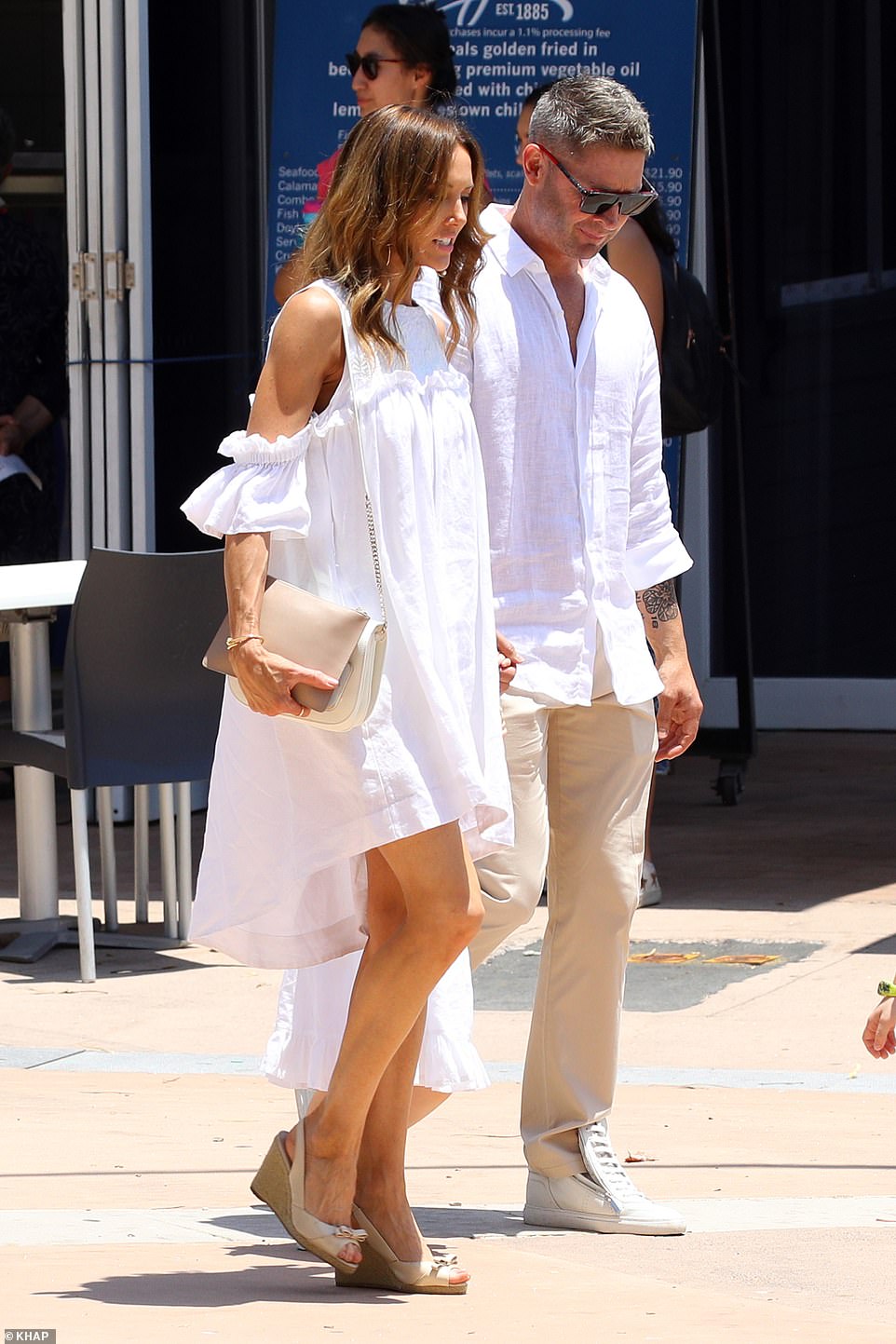 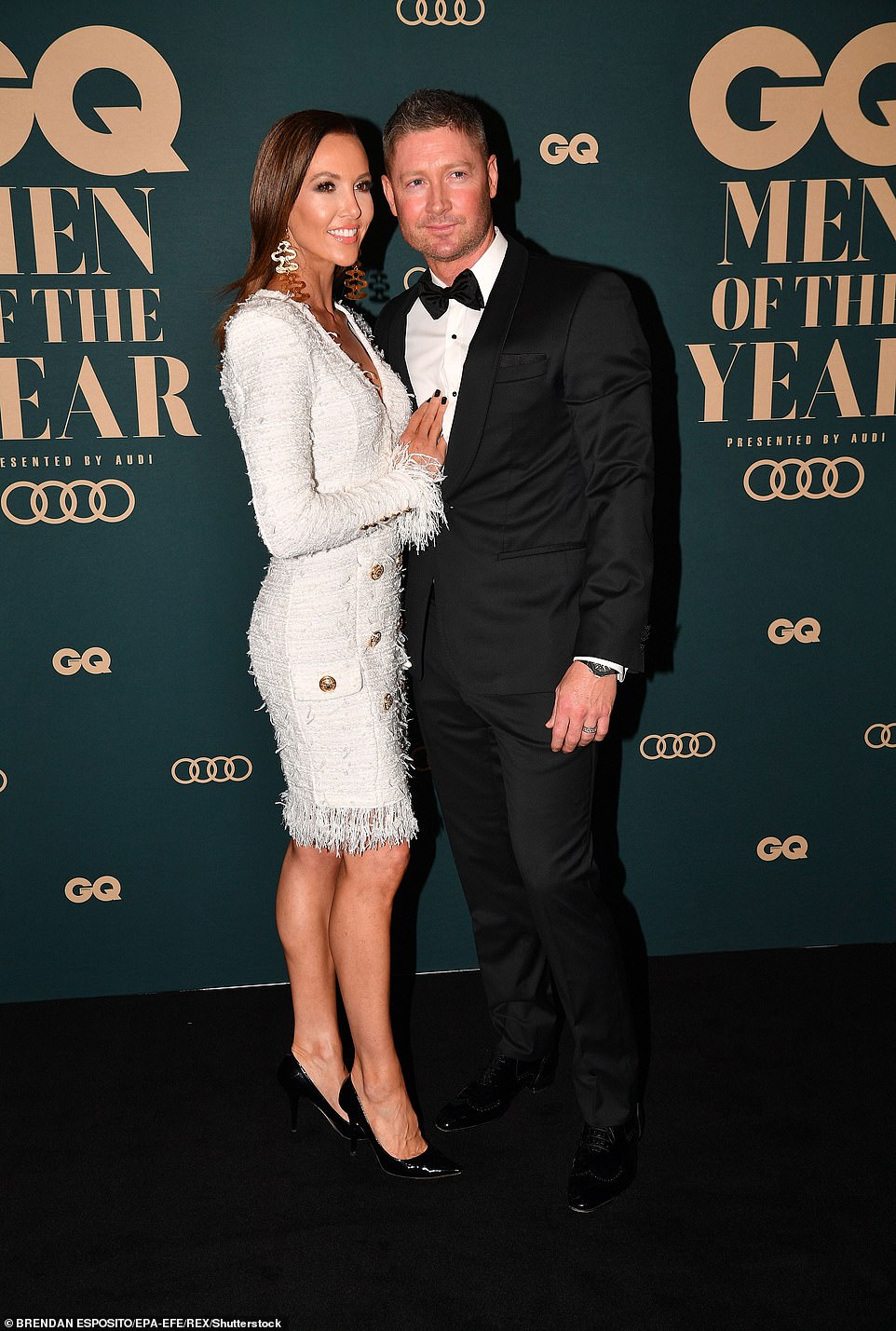 In November, the couple united for Kelsey Lee’s birthday at McDonalds – with Kyly sharing photos of the party she threw as her daughter turned four.

Her still decorated ring finger was visible in one of the shots as she posed with Kelsey Lee and her husband.

The following month, the Clarkes once again appeared the perfect couple as they celebrated Kyly’s parents’ 50th wedding anniversary in Sydney. 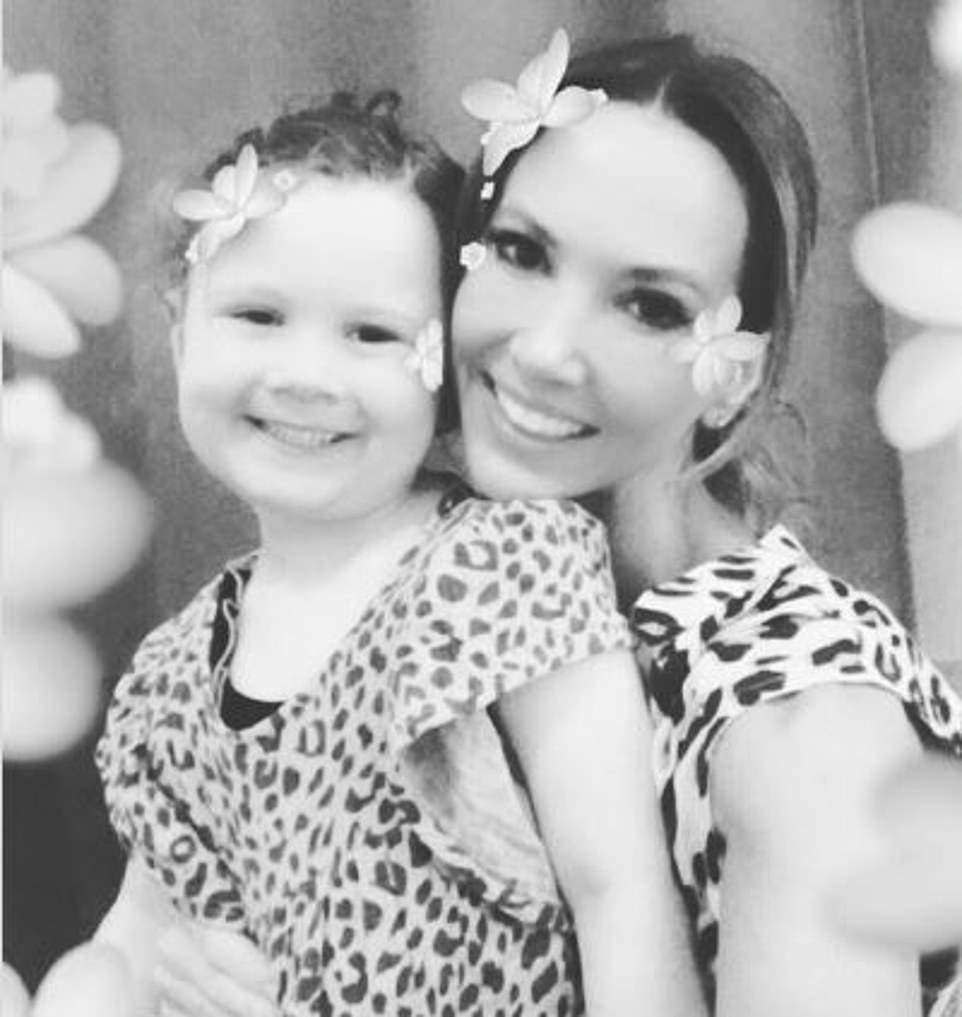 Kyly posted this photo of her with her daughter this week, hours before the couple’s split was announced. She captioned the photo ‘it’s Wednesday. Twinning.’ 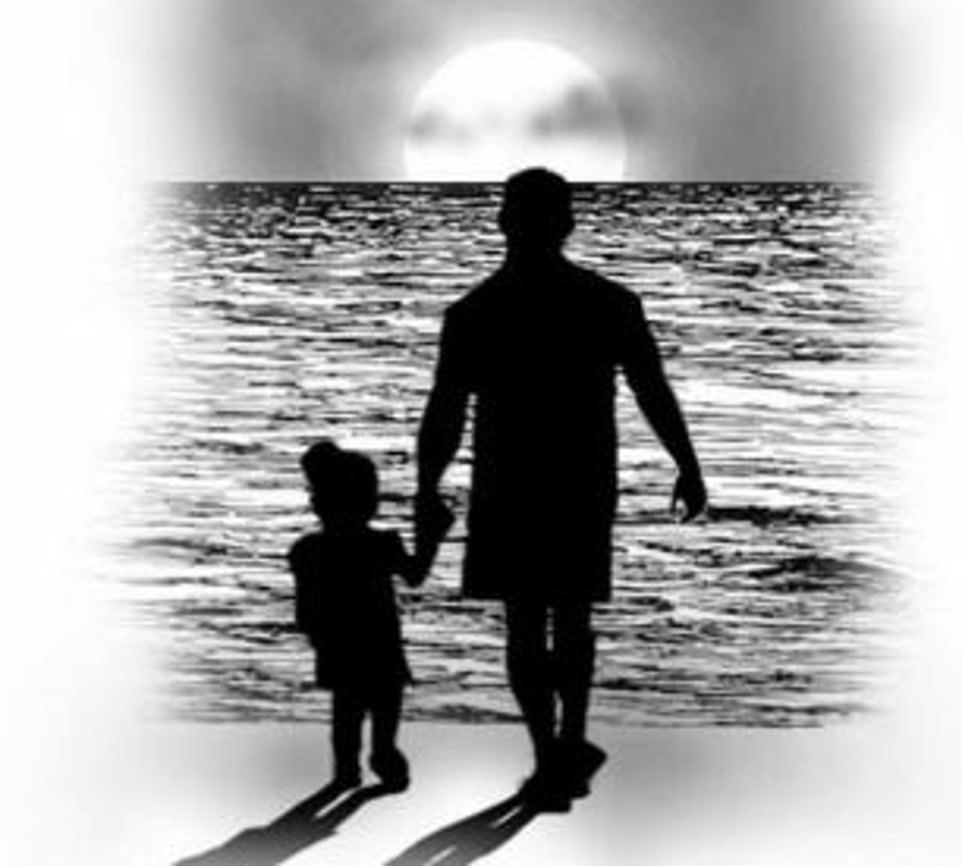 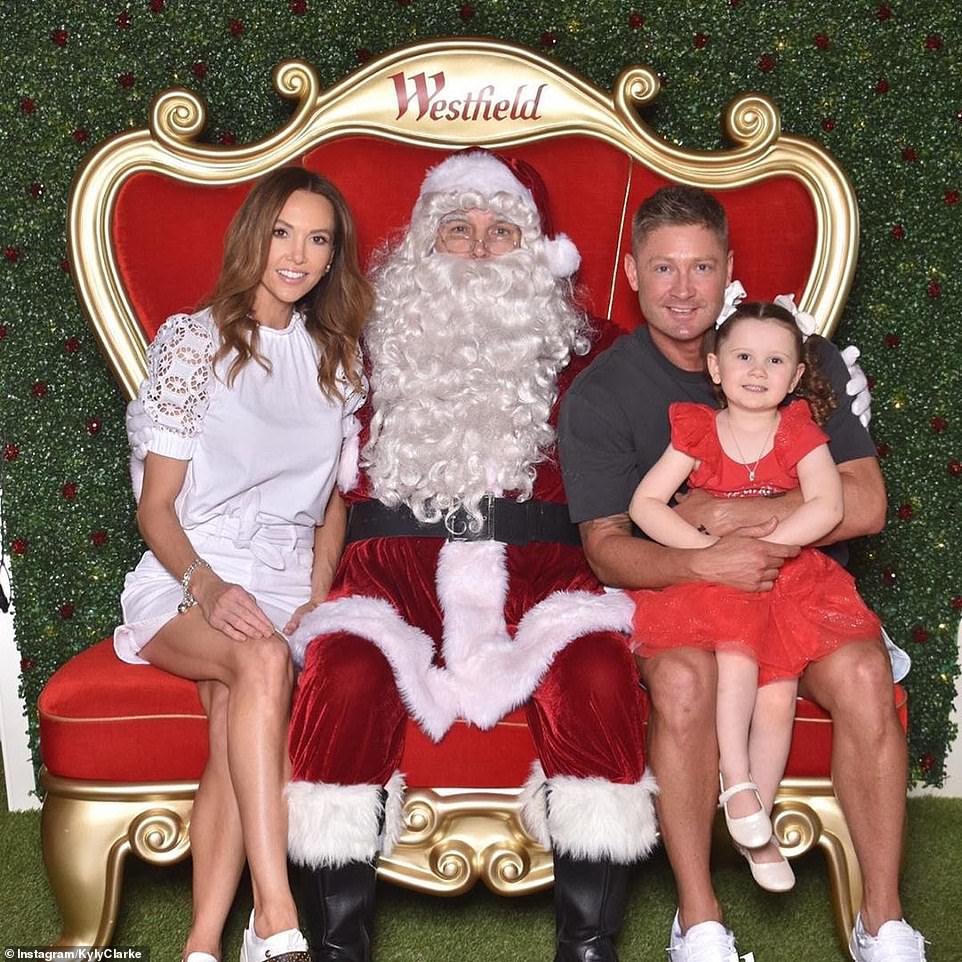 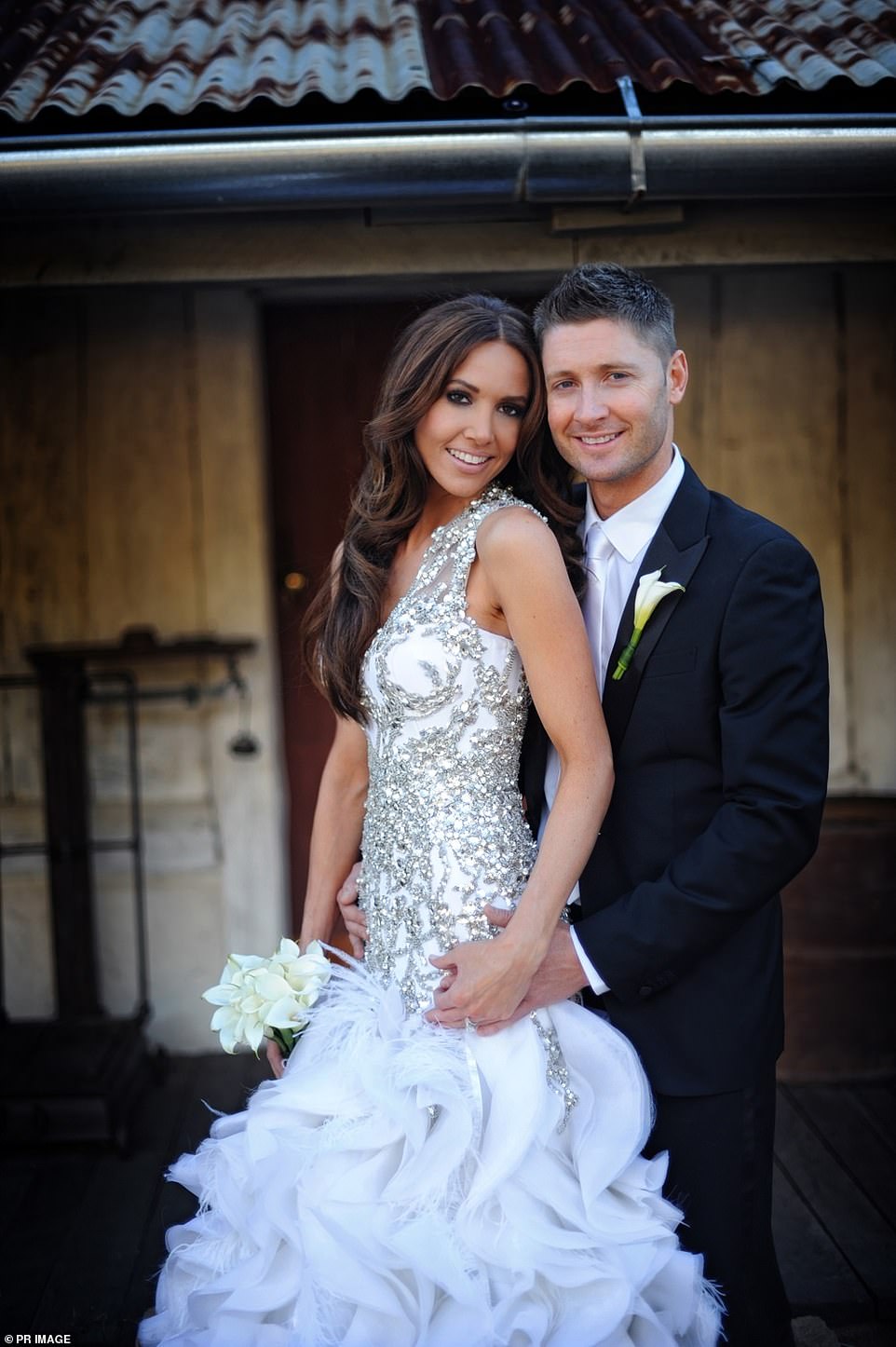 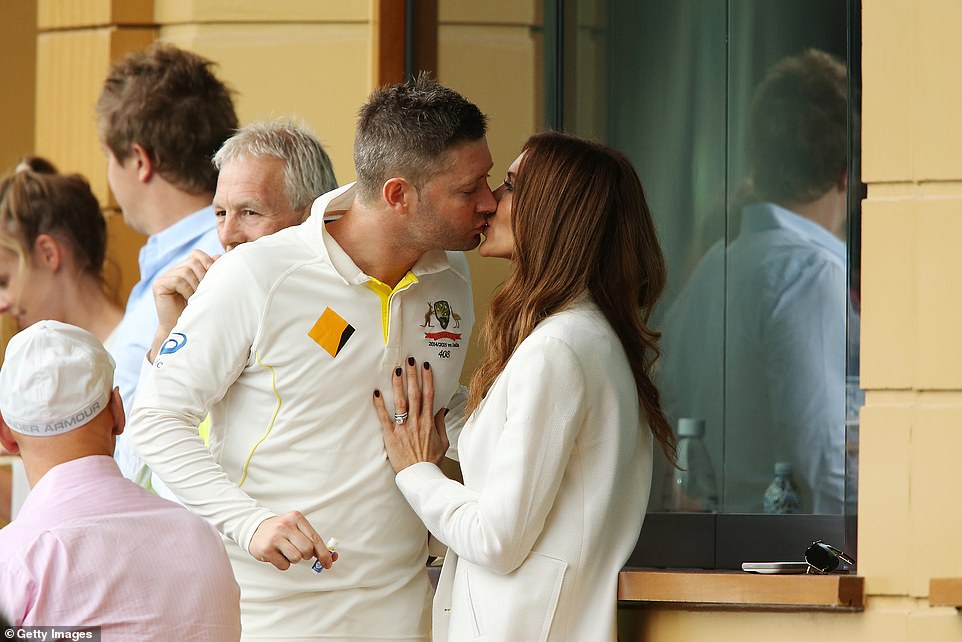 Michael Clarke of Australia kisses his wife Kyly Clarke during a rain delay during day two of the First Test match between Australia and India at Adelaide Oval on December 10, 2014

The Clarkes have already agreed terms on their divorce – as well as arrangements to co-parent their daughter. 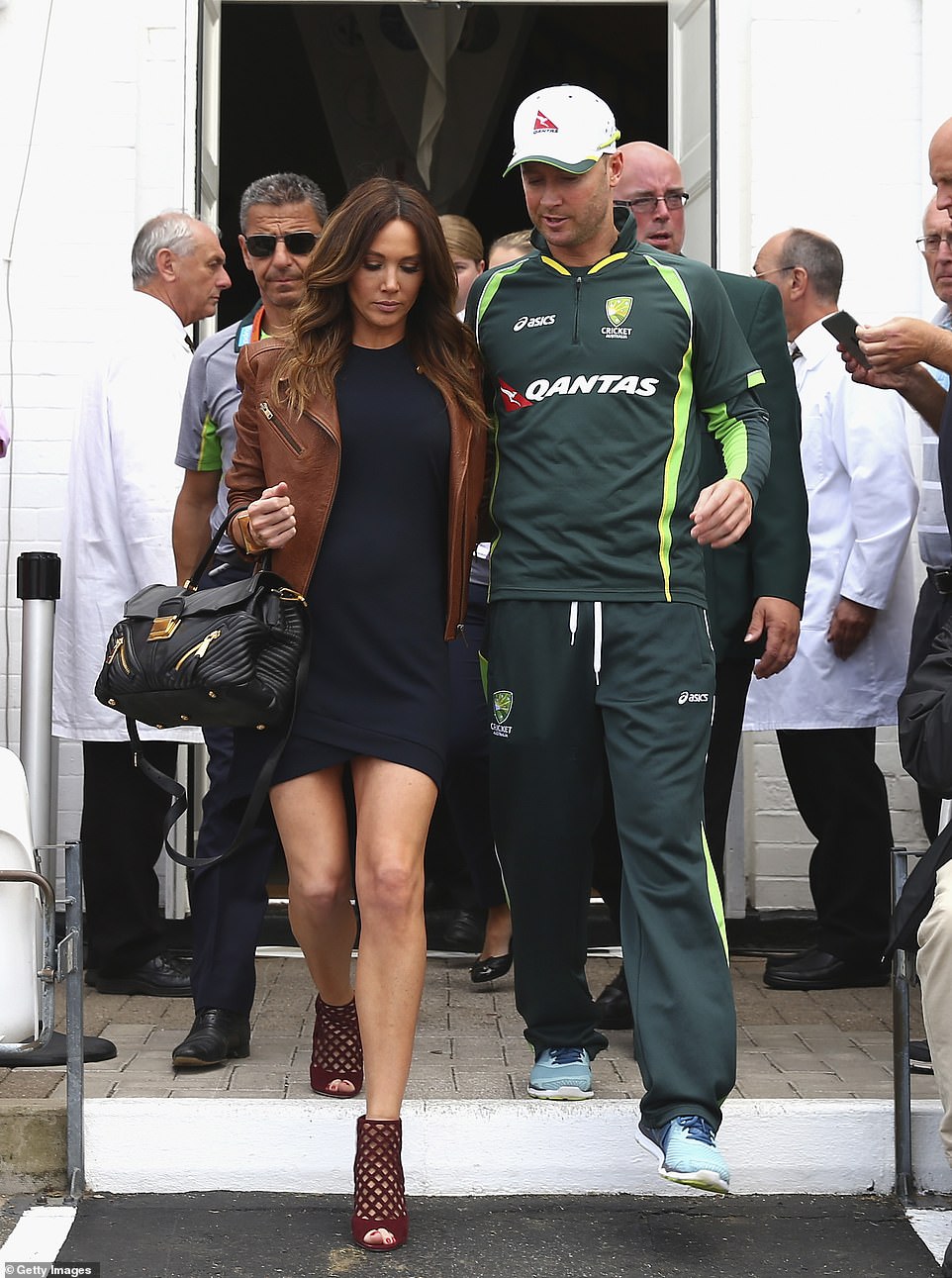 Michael and Kyly walk onto the field after Clarke announced his retirement during an Ashes Test in 2015. They said on Wednesday they have made ‘the difficult decision to ­separate as a couple amicably’ 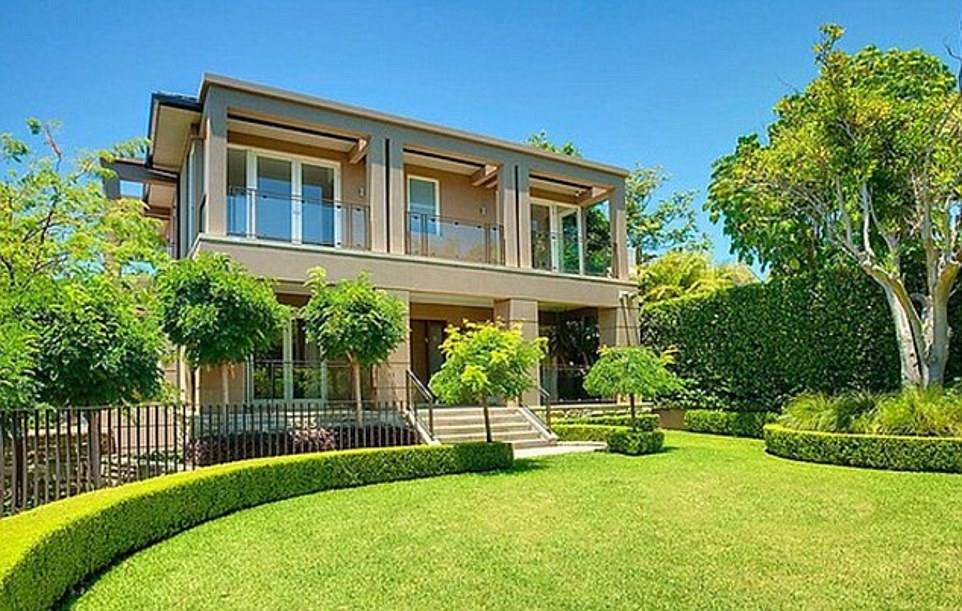 Clarke is understood to have moved out of the home he and Kyly shared in the ritzy eastern Sydney suburb of Vaucluse (pictured), estimated to be worth at least $12million, when they separated five months ago 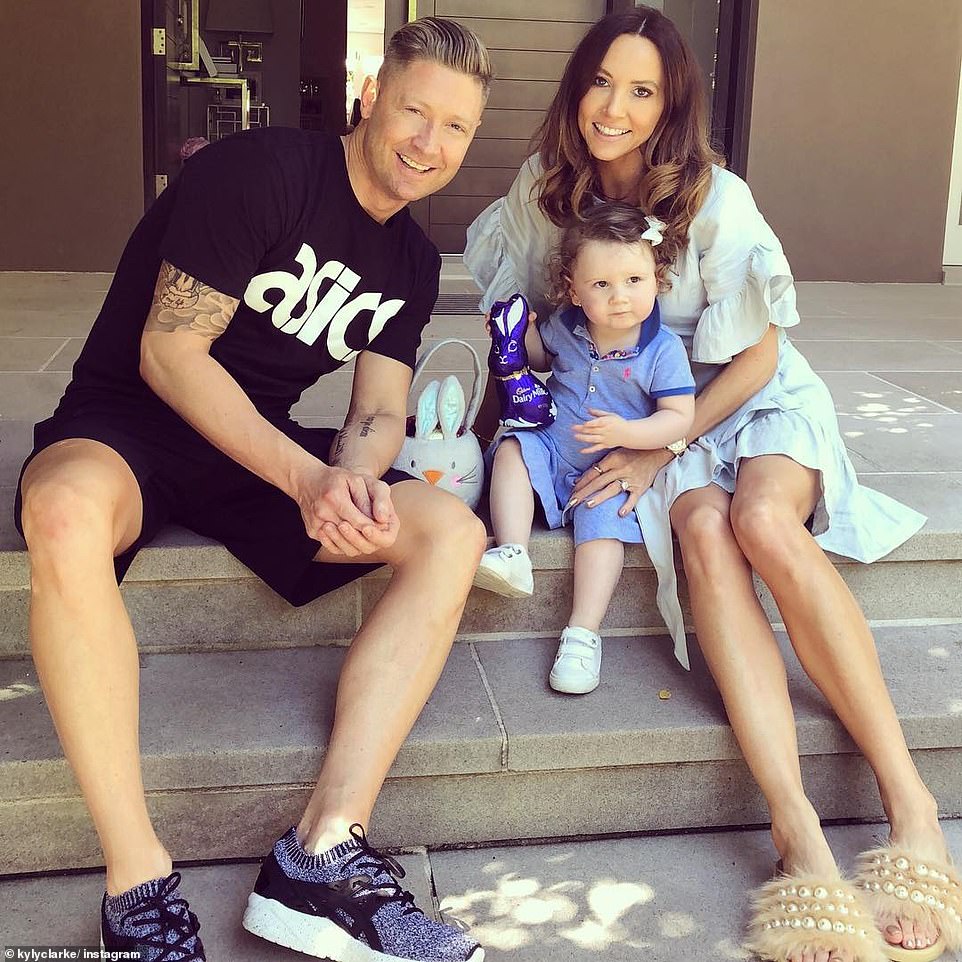 His other assets include a $4million property in Bondi he owns jointly with his sister Leanne who lives there with her family.

Clarke has other savings and investments valued at roughly $18million. He is the co-owner of private equity firm BCXXIII alongside his friend, accountant Anthony Bell.

The company was named in honour of Clarke’s jersey number 23 he wore during his one-day international career.

Kyly has 70,000 Instagram followers and sells her own homeware products through her company Lyfestyled by Kyly Clarke.

She was announced as a judge on channel 7 show show House Rules in October.

According to the Australian, the couple – who met in the 1990s at Westfields Sports High School in Fairfield – have negotiated the terms of their split without going through the courts.

Kyly will continue to live with Kelsey in Vaucluse, the publication reports.

The newspaper reported that neither has a new partner. 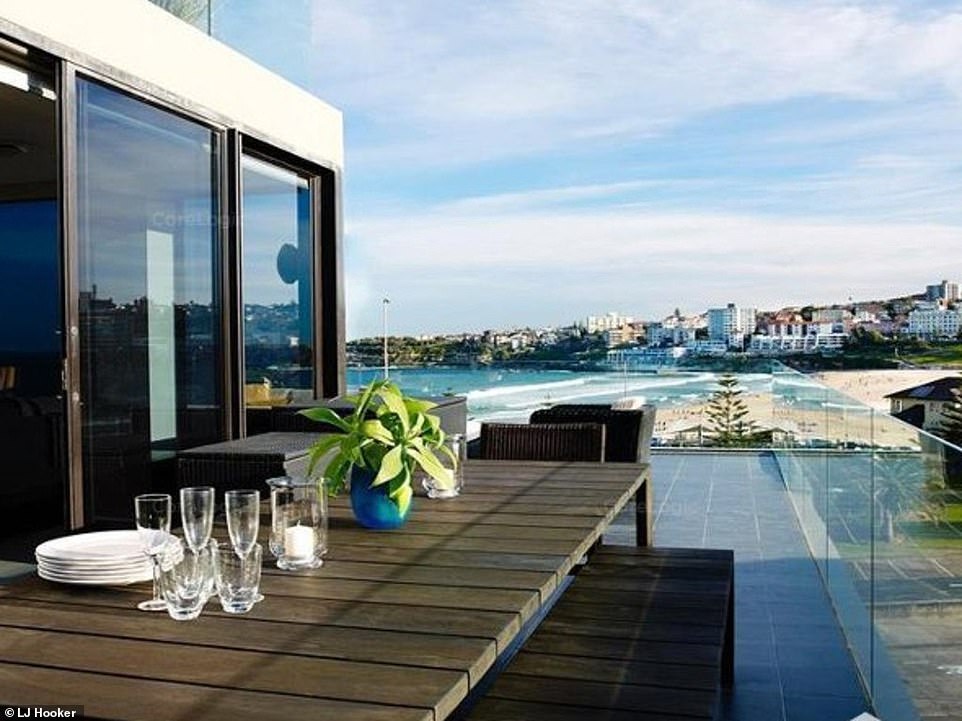 Clarke has reportedly moved into their $8million home on Bondi’s beachfront (pictured) since the split, which he put on the market last year 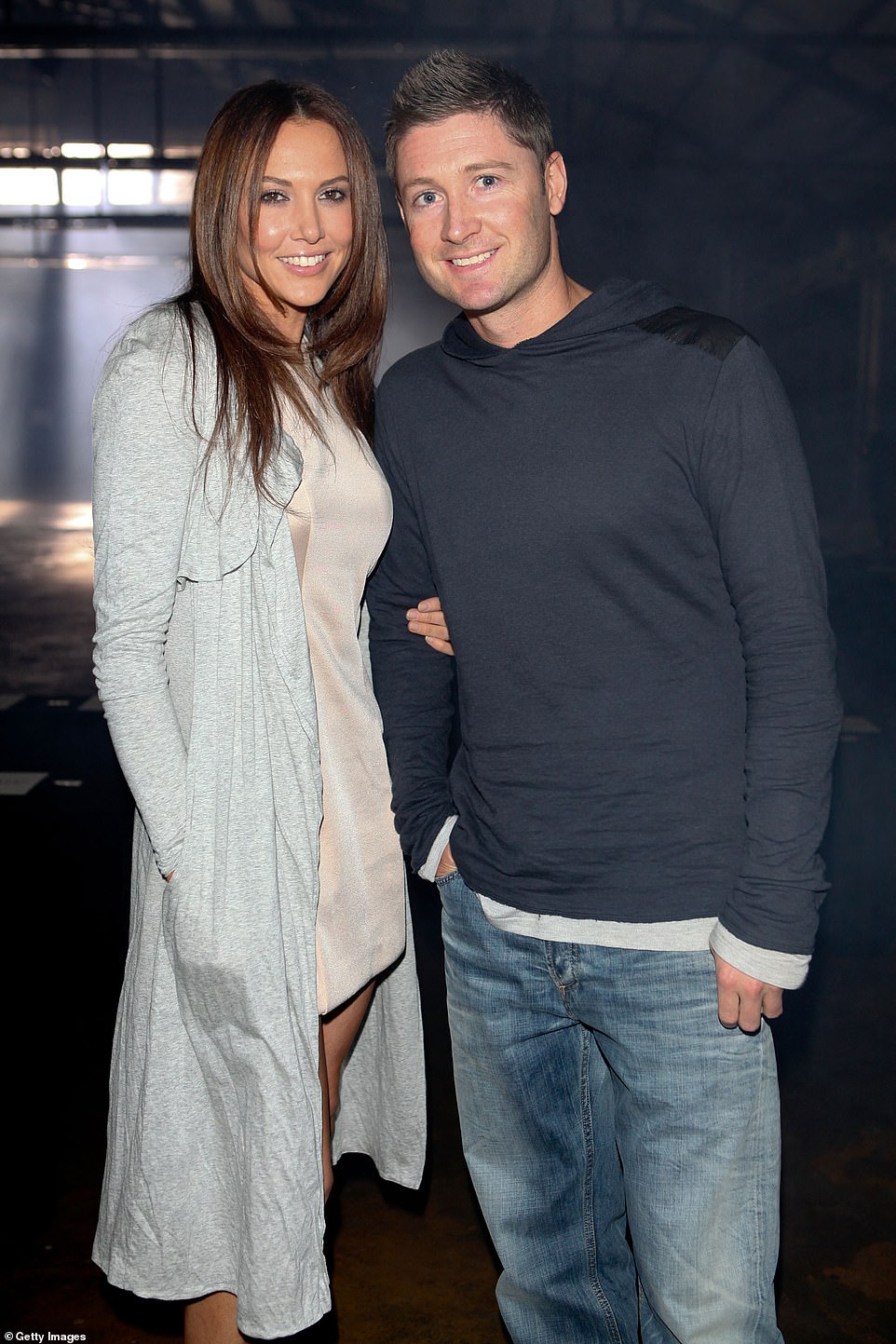 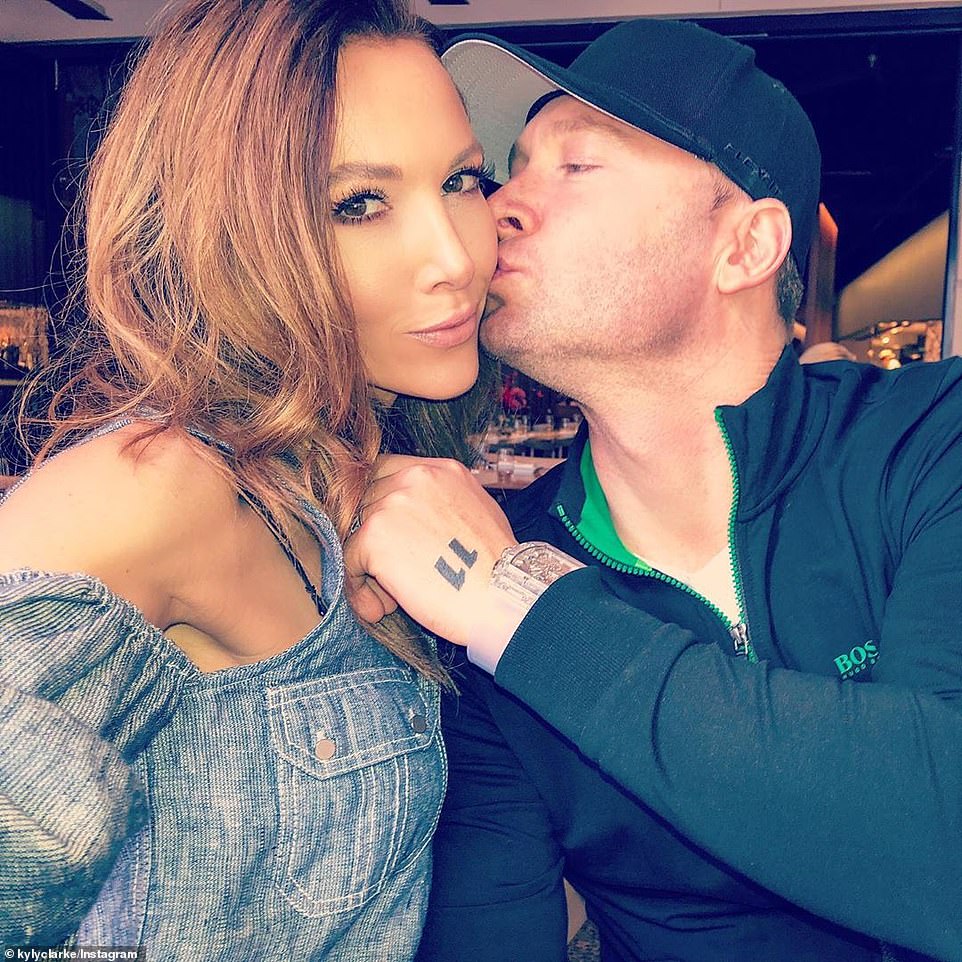 ‘With the greatest of respect for each other, we’ve come to the ­mutual conclusion that this is the best course for us to take while committed to the co-parenting of our daughter,’ their joint statement said 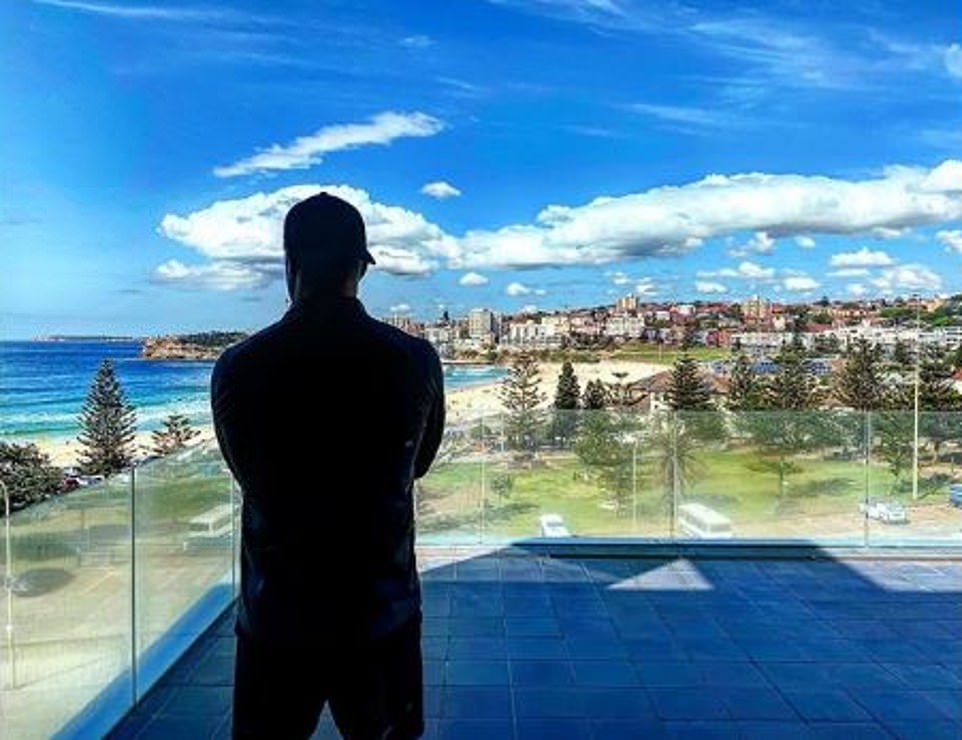 Last week, Clarke posted this picture from his house in Bondi with the caption ‘love this place’

In November 2018, Clarke made headlines when he and his bikini-clad assistant, Sasha Armstrong, were spotted on Sydney Harbour aboard a super-yacht.

The pair enjoyed a swim in the ocean and engaged in a long conversation as they relaxed in the sun. 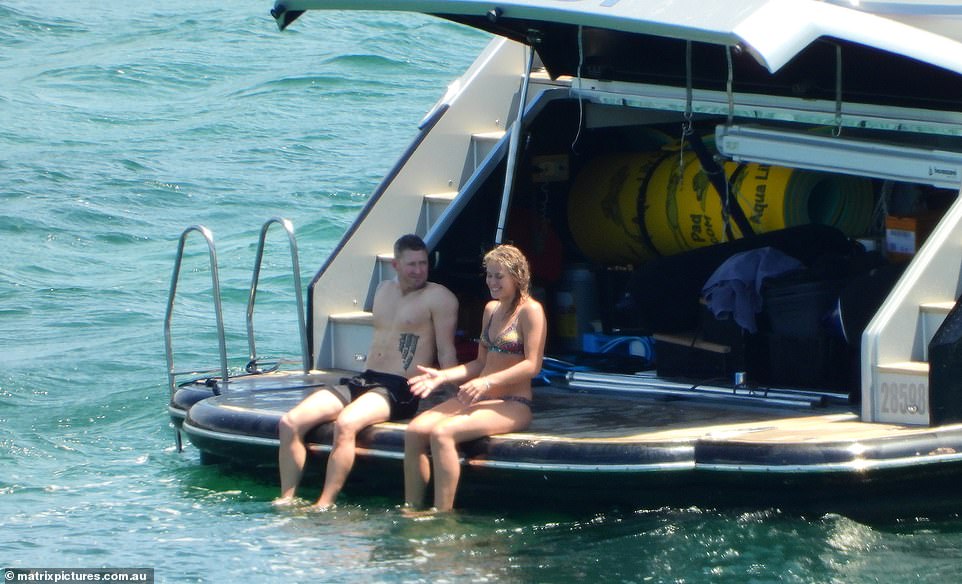 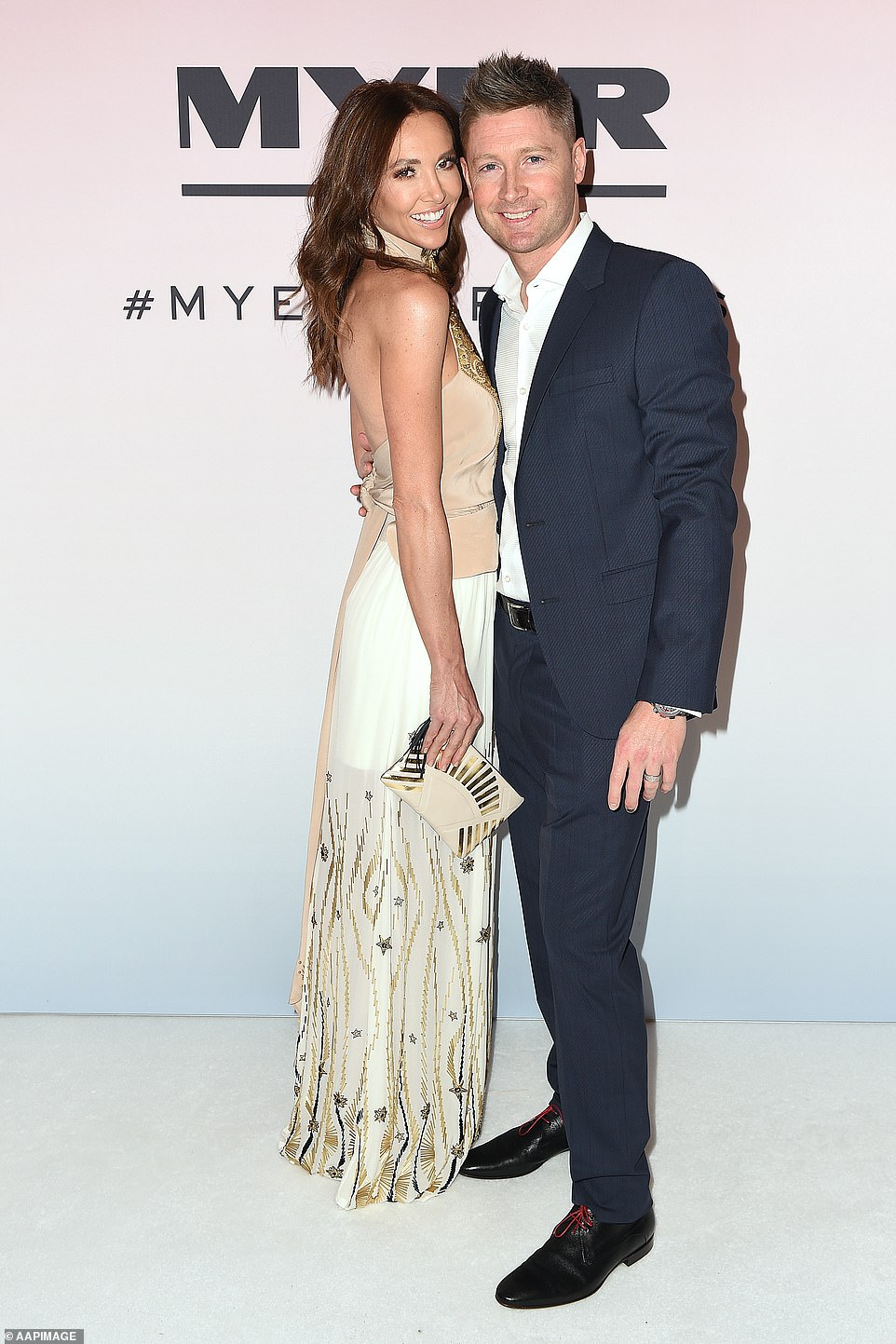 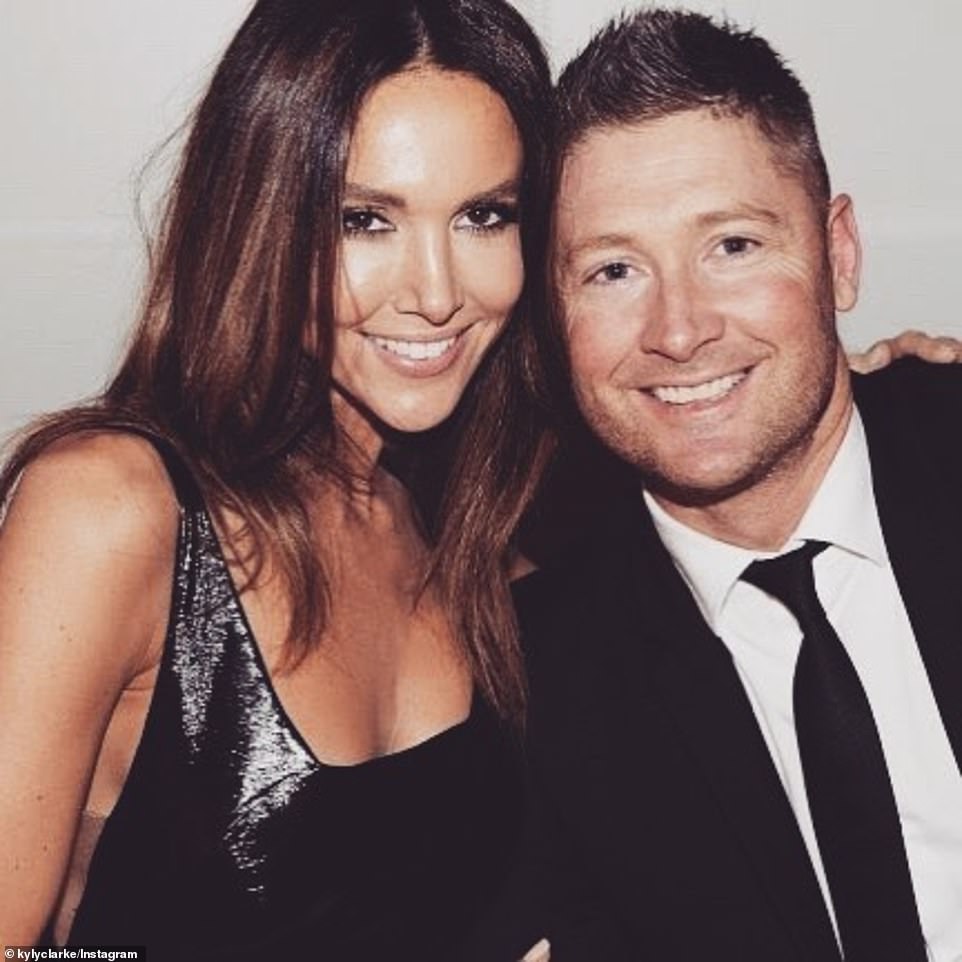 The mother-of-one added the key to a happy marriage is to keep up regular date nights.

‘Have those date nights so you’re always keeping everything nice and fresh.’

The split is the second of Clarke’s high-profile relationship breakdowns.

In 2010 he revealed he had split with fiancee Lara Bingle, who was the face of Scott Morrison’s 2006 Tourism Australia ‘where the bloody hell are ya?’ marketing campaign.

It was widely reported Bingle flushed her engagement ring down the toilet of his Bondi apartment – a claim Clarke denied. 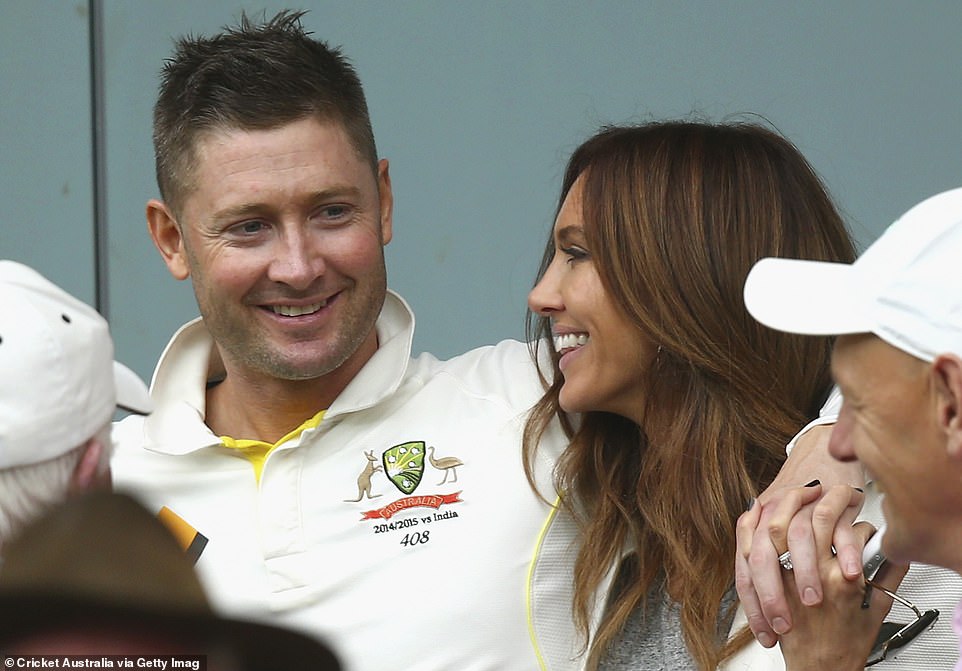 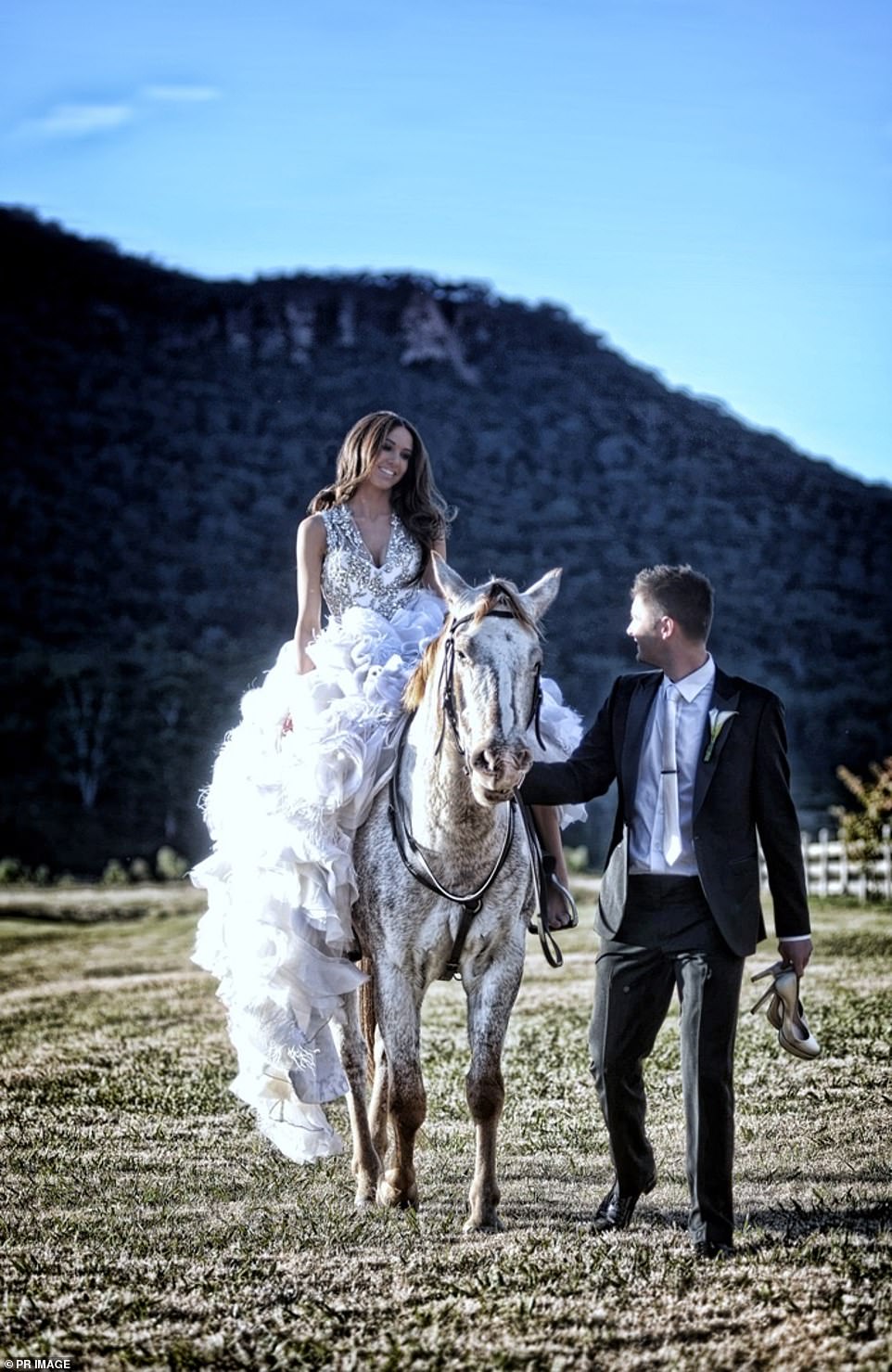 The Clarkes are pictured on their wedding day. Prior to marrying Kyly, Clarke was engaged to model Lara Bingle 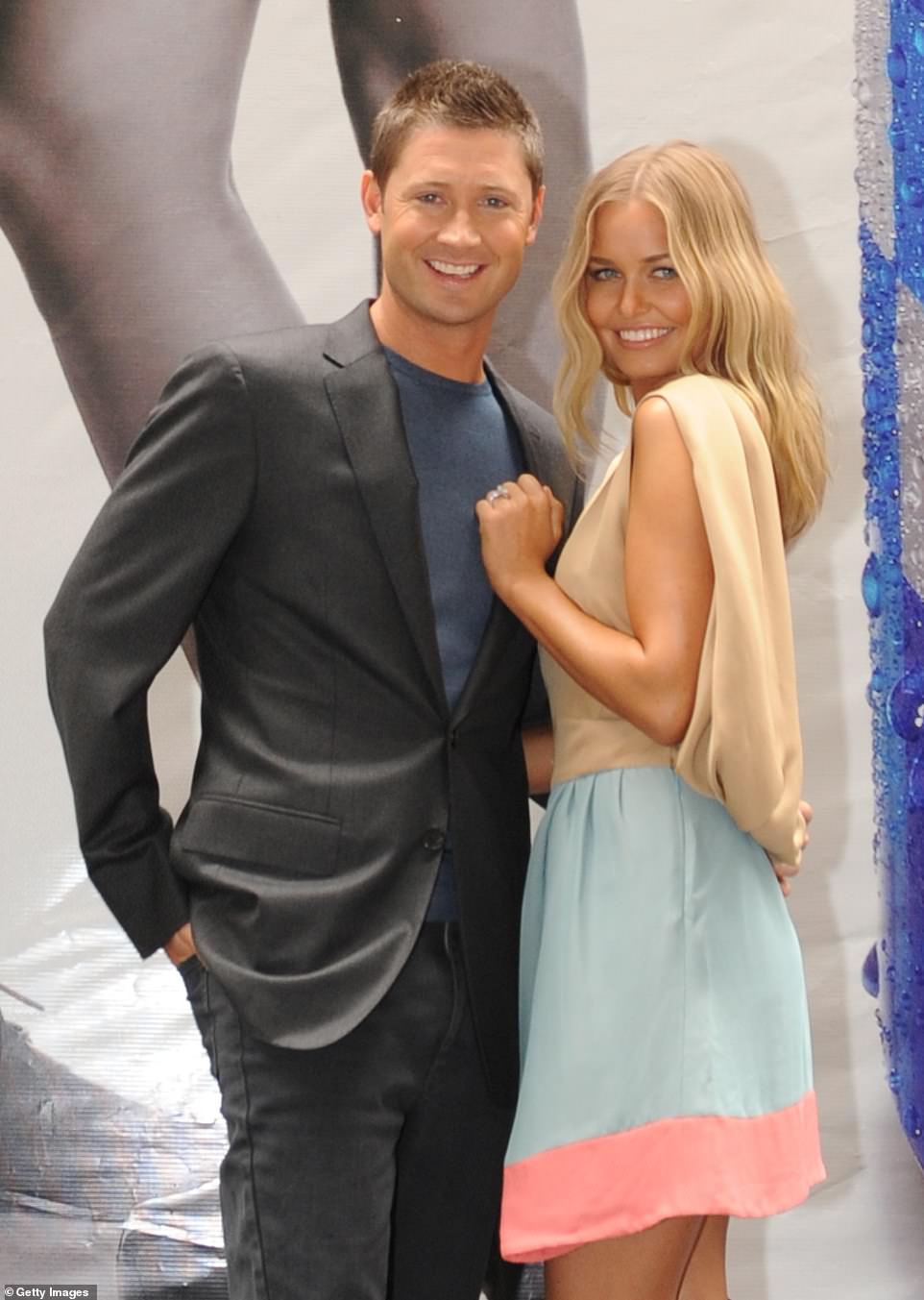 Clarke separated from his ex-fiancee Lara Bingle in 2010. Bingle allegedly flushed her engagement ring down the toilet of his Bondi apartment – a claim Clarke denied (Michael and Lara pictured in March 2010)