President Donald Trump admitted Thursday that his personal attorney Michael Cohen represents him ‘with this crazy Stormy Daniels deal’ but distanced himself from the lawyer who is now pleading the Fifth Amendment.

Trump spoke by phone ‘Fox & Friends’ in an extraordinary half-hour appearance and said: ‘Like with this crazy Stormy Daniels deal, he represented me and you know, from what I see, he did absolutely nothing wrong.’

Cohen said Wednesday he will assert his constitutional right against self-incrimination in a civil case brought by Daniels, who is seeking to invalidate the confidentiality agreement. 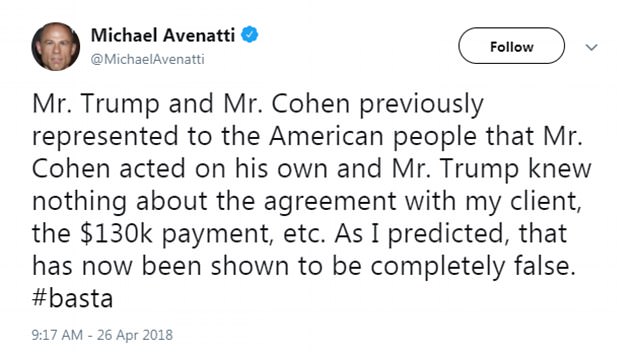 Crowing: Stormy Daniels’ attorney Michael Avenatti said that the president’s admission meant both Trump and Cohen had misrepresented the truth in the past 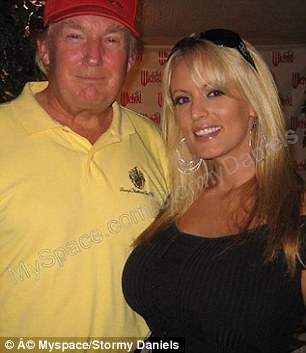 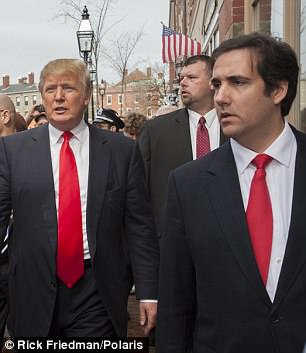 What does he know? Michael Cohen is pleading the Fifth Amendment to avoid incriminating himself when he takes part in a civil case brought by Stormy Daniels over her claims of sex with Trump. Trump said Cohen was pleading over his own business dealings 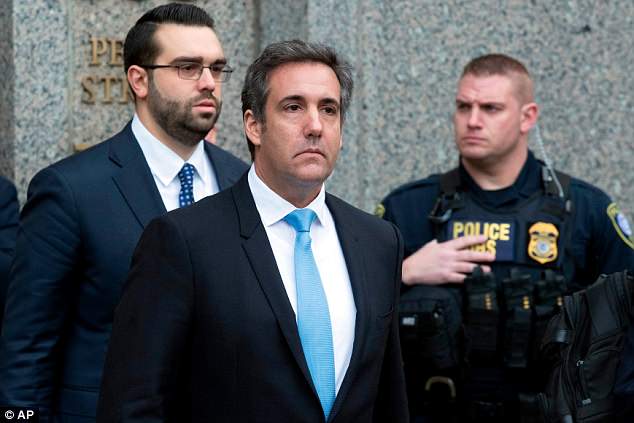 Key development: Michael Cohen has told a court in California that he will take the Fifth Amendment in civil litigation brought by Stormy Daniels – meaning that he could incriminate himself through evidence in the case

But Trump told the Fox News morning show: ‘This has nothing to do with me. I’ve been told I’m not involved.’

Instead he claimed that Cohen – whom he called a ‘good guy’ – was being investigated over his own business dealings.

‘Michael is in business. He is really a businessman, a fairly big business as I understand it. I don’t know his business,’ the president said.

And he sought to distance himself from Cohen’s legal work, saying that he had many attorneys and that Cohen did only a ‘tiny fraction’ of his work.

The admission, however, was seized on by Daniels’ attorney Michael Avenatti who said on Twitter that Trump ‘previously represented to the American people that Mr. Cohen acted on his own and Mr. Trump knew nothing about the agreement’.

‘As I predicted, that has now been shown to be completely false,’ he said.

Avenatti had also predicted that Cohen would plead the Fifth Amendment to avoid self-incrimination in the law suit brought by Daniels.

Cohen, whose business dealings are under FBI investigation and whose office, home, hotel room and safe deposit box were raided this month, will make the plea in a California civil case.

It means that he believes he could incriminate himself when giving evidence in the case – a move which will raise fears in the Trump camp over what crimes he may think he could be charged with.

The development was disclosed in a brief court filing in Los Angeles Wednesday.

Cohen and Trump are both being sued there by Daniels, real name Stephanie Clifford, to try to end the $130,000 gag order she agreed to before the election, which stopped her speaking about her claim of sex with the then candidate.

Avenatti, said on Twitter that it was ‘a stunning development’ because it was a case involving ‘issues surrounding the President’.

He added a link to a report that quote Trump as saying in 1990: ‘If you’re innocent, why are taking the Fifth?’ 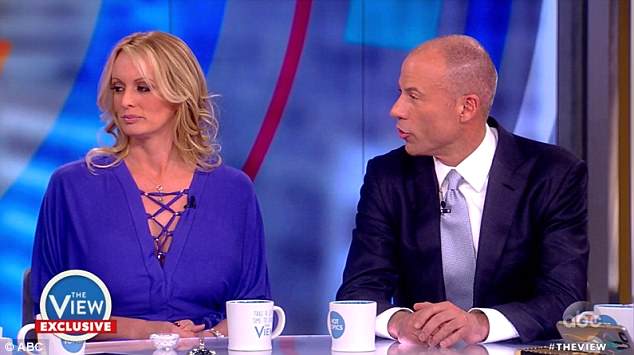 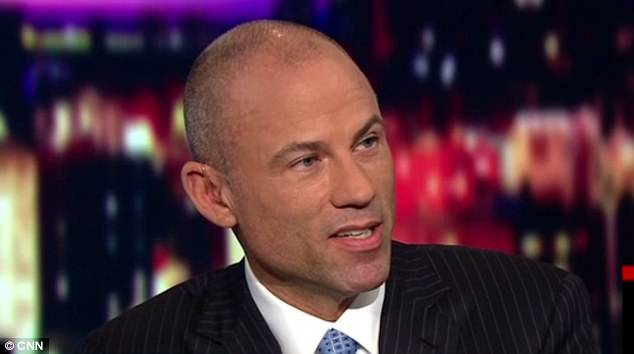 During an appearance on CNN on Wednesday night, Avenatti said he predicts that the Cohen investigation will result in Trump’s resignation

During an appearance on CNN on Wednesday night, Avenatti said he predicts that the Cohen investigation will result in Trump’s resignation.

Avenatti said he believes the government has evidence that Cohen was in touch until recently with Keith Davidson, the former attorney for Daniels who negotiated the $130,000 non-disclosure agreement.

‘There’s substantial reason to believe that these two attorneys were continuing to communicate with one another well into this year about my client, the settlement, the negotiation, and documents relating to this payment,’ Avenatti told CNN.

Cohen told the judge: ‘Based upon the advice of counsel, I will assert my 5th amendment rights in connection with all proceedings in this case due to the ongoing criminal investigation by the FBI and U.S. Attorney for the Southern District of New York.

‘On April 10, 2018, I first realized that my Fifth Amendment Rights would be implicated in this case, after I considered the events of April 9, 2018.’

The move was predicted earlier this month by Daniels’ attorney Michael Avenatti.

After the filing, he tweeted: ‘This is a stunning development. Never before in our nation’s history has the attorney for the sitting President invoked the 5th Amend in connection with issues surrounding the President. It is esp. stunning seeing as MC served as the ‘fixer’ for Mr. Trump for over 10 yrs.’

It will be seen by the president’s defenders as a worrying indication that Cohen has committed a crime in some form – which could then be used by Robert Mueller, the special counsel, to turn on Trump in return for immunity.

Trump has ridiculed the idea that Cohen would ‘flip’, but taking the Fifth in the civil case is a sign of the attorney’s growing fear that he could face charges.

One person who has taken the threat of Cohen flipping seriously is his former legal adviser, Jay Goldberg. 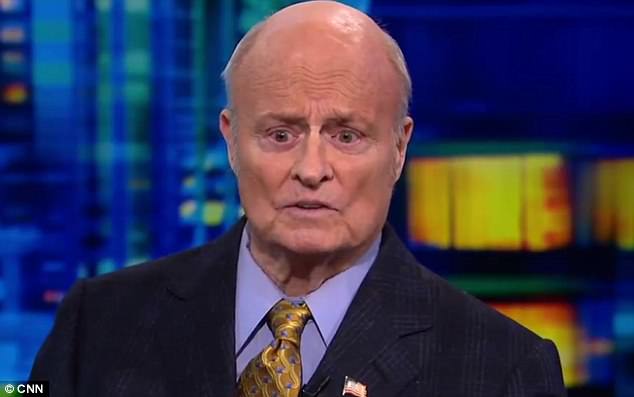 Jay Goldberg, Trump’s former legal adviser, told the president recently that it is virtually certain Cohen will ‘flip’ if he is indicted by the federal government

Goldberg told The Wall Street Journal earlier this month that it is virtually certain that Cohen will cooperate with federal investigators and turn over damaging information about Trump if he is faced with criminal charges.

Goldberg, who represented Trump in the 1990s and early 2000s, said he spoke with the president recently and warned him that Cohen would turn on him if it meant staying out of prison.

The FBI raid was ordered by federal prosecutors in Manhattan after information was passed to them by Mueller. The nature of Mueller’s tip-off has not been disclosed.

Cohen asked the judge to delay the civil case after his office and residence were raided by the FBI.

At a hearing last week, U.S. District Judge James Otero said he needed more time to review the request for a stay, but he told Cohen’s attorney ‘there’s some gaping holes’ in the request.

Daniels has been seeking to invalidate the nondisclosure agreement she signed days before the 2016 elections so she can discuss the alleged relationship – which Trump denies – without facing penalties.

She argues it invalid because Cohen signed it, but the president did not.

That did not stop her from describing her sex with Trump to Anderson Cooper on CNN, but her legal team say that she could be sued for doing so and want that threat lifted. 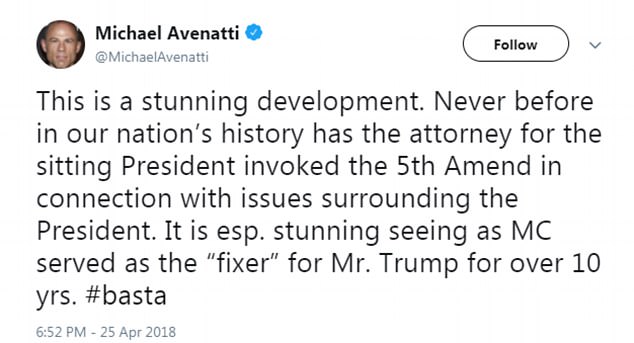 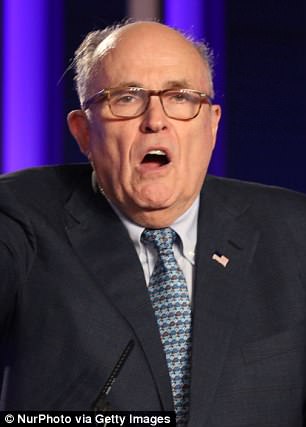 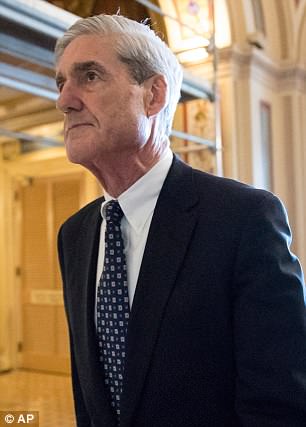 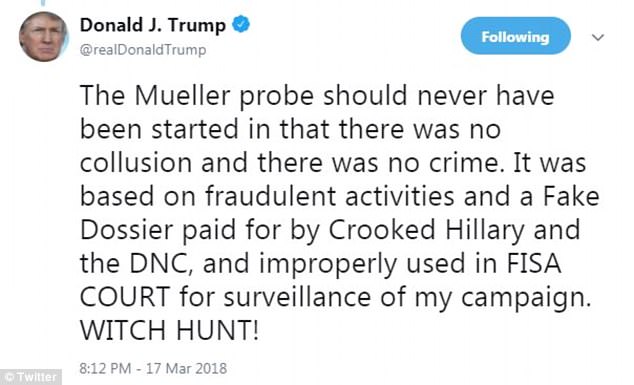 The Washington Post reported that Giuliani reopened discussions on a potential interview between Trump and Mueller, conversations that had broken down in the aftermath of the FBI’s raid on longtime Trump lawyer Michael Cohen’s office, hotel room and home.

It is important for investigators to understand the president’s intent as they look into potential obstruction of justice, Mueller noted.

Mueller, the head of the FBI before James Comey, and Giuliani, who stewarded New York City through the 9/11 terror attacks, have known each other for years thanks to their law enforcement backgrounds.

Trump has vehemently and repeatedly denied collusion with Russia, calling it a ‘witch hunt’ and also slammed claims that Cohen would flip on him because he had not been treated well by the president.

He dismissed them as based on a ‘drunk/drugged up loser’, although officials would not say who that was.

One report in the New York Times which appeared to have caused Trump’s ire mentioned both Roger Cohen, his long-time adviser, and Sam Nunberg, a former Trump adviser who went into rehab e after a series of television interviews on which he claimed he would not co-operate with Mueller. 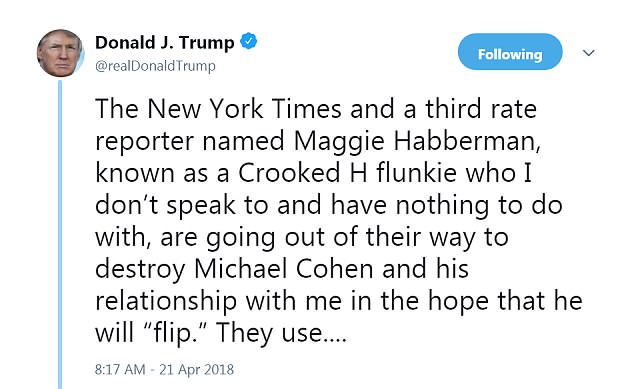 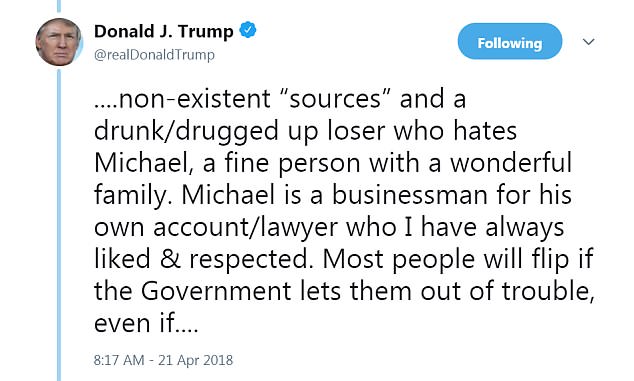 In a string of tweets on Saturday morning, President Trump defended Michael Cohen and said he did not think he would ‘flip’ on him as has been suggested. He deleted the tweets then reposted them shortly afterwards with the correct spelling of Maggie Haberman’s name. Haberman published a report on Friday citing multiple unnamed sources who said it was a possibility that Cohen might turn on Trump

SPANKING, A $130,000 GAG ORDER AND SECRET DEALS – HOW CLAIMS OF SEX WITH STORMY DANIELS TURNED INTO A FULL-SCALE FBI RAID

2011: Daniels gives an interview about her tryst with Trump to In Touch Weekly. In 2018 she tells 60 Minutes that she was threatened by a man in Las Vegas over the telling of her story, and so the interview never ran.

October 2016: In the weeks before voters head to the polls, Trump’s personal lawyer Michael Cohen uses a Delaware-based LLC to make a $130,000 payment to Daniels, in exchange for her to sign a non-disclosure agreement to keep quiet about the alleged sexual encounter.

February 13, 2018: Cohen publicly admits to paying the $130,000, but says he did so with his own personal money, and was reimbursed by the Trump campaign nor the Trump Organization. In referencing the payment, Daniels’ attorney says the NDA is breached.

March 6, 2018: The Washington Post reported that Mueller requested documents and interviewed witnesses about incidents involving Cohen.  Additionally, Daniels filed a lawsuit against Trump in California Superior Court claiming that the NDA never went into effect because Trump never signed it.

March 16, 2018: Lawyers for both Cohen and Trump attempt to get the Daniels’ lawsuit moved from state to federal court. This marked the first time lawyers for Trump are actively involved in legal action over the Daniels’ matter.

March 28, 2018: The 60 Minutes’ interview with Daniels airs.  She details spanking Trump with a magazine with his face on the cover and having sex with him once.

April 5, 2018: For the first time, Trump speaks about the $130,000 payment telling reporters on board Air Force One that he had no knowledge of it at the time.  ‘You’ll have to ask Michael,’ the president responded when asked why Cohen made the payment

April 9, 2018: The FBI raids the New York City offices of Cohen. Federal prosecutors in Manhattan received a referral from Mueller, the New York Times reported. CNN reported that documents related to the Daniels affair were swept up in the search.