Lawmakers are also girding to ask him questions about a planned Moscow tower project that he pursued well into the 2016 presidential campaign. He plans to tell lawmakers Trump asked him about it ‘several times.’

He further plans to talk about Trump’s ‘lies, racism and cheating as a private businessman,’ according to the account.

Michael Cohen kicks off a three-day, trio of Capitol Hill appearances on Tuesday

Trump and his legal team have repeatedly branded Cohen as a liar, and say he cooperated with prosecutors and furnished false information to get a reduced jail sentence.

Cohen on Tuesday will raise his hand before the Senate Intelligence Committee to kick off a three-day, back-to-back trio of appearances on Capitol Hill where he will face multiple grillings from lawmakers on his relationship with President Donald Trump and his guilty plea to lying to Congress.

Wednesday’s public hearing will overshadow the others merely by the presence of TV cameras, to which both Cohen and the lawmakers will be playing to as they engage in a verbal parle on a variety of issues, including the building of Trump Tower Moscow, the payoffs to women during the 2016 campaign, Trump’s business dealings, and donations to the president’s inaugural committee. 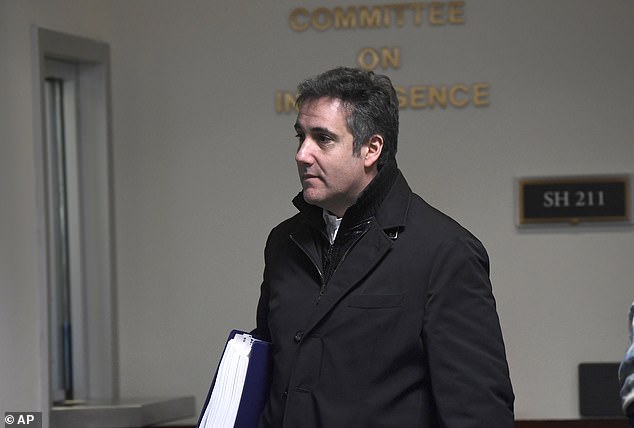 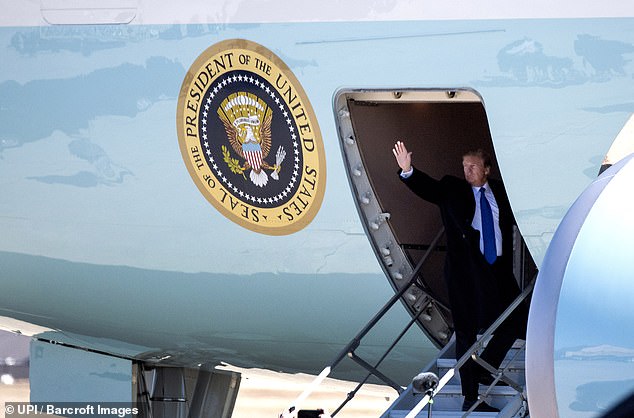 President Trump will not be in town for Cohen’s appearances, having left Monday for Vietnam

But one topic not the public agenda: Russian interference in the 2016 presidential election and any possible collusion between Trump’s team and Moscow.

Oversight panel chairman Elijah Cummings coordinated with his counterpart on the House Intel panel, Adam Schiff, and the two agreed the Russia conversation will happen discussed behind closed doors at the intelligence session while Trump’s business dealings will be the focus of the public hearing, according to a memo released Sunday by the Oversight panel.

Lawmakers can dismiss the chairman’s guidance and ask whatever they chose, but Cohen’s attorney, Lanny Davis, also said his client cannot talk about the Russia probe in public.

Senators, meanwhile, are eager to have Cohen in their crosshairs on Tuesday.

‘I think the reason you have him back is, when somebody lies to Congress in an investigation like this, the questions you might have asked the next witness don’t get asked. Somebody you might have called doesn’t get called,’ Senate intelligence panel member Sen. Roy Blunt said Sunday on CBS’ ‘Face the Nation.’

However, Republicans are already preparing to cast doubts on Cohen’s credibility – one of Trump’s legal team’s major arguments against the president’s former personal attorney.

‘I don’t know that we believe him this time,’ Blunt noted.

Republicans will be just as hard on Cohen as Democrats, particularly those closed tied to the president.

Republican Reps. Jim Jordan and Mark Meadows, two of Trump’s staunches allies on Capitol Hill, sent a letter to Cohen’s attorneys last week saying they intend to press the president’s former personal lawyer on his questionable business dealings, his lies to Congress, his work for foreign entities, and even ‘the fake Women for Cohen social media initiative he commissioned.’

One person who won’t be in town for the show is President Trump, who jetted off to Vietnam on Monday for his second summit with North Korean leader Kim Jong Un. But he will have the ability to tweet even with the 12 hour time difference.

This week marks Cohen’s first time before lawmakers since he pleaded guilty to lying to Congress about the timing of talks concerning the building of a Trump Tower Moscow during the 2016 presidential campaign.

Lawmakers have indicated that will be a major topic of interest.

‘Well, a great deal starting with why the false statements before our committee when he first appeared. Did they go beyond what he told us about Moscow Trump Tower into other areas as well?,’ House Intelligence panel chair Rep. Adam Schiff said on ABC’s ‘This Week’ on Sunday.

Democratic Rep. Jim Himes, who also sits on the Intelligence panel, said he wants to know the same.

‘Well, you know, Michael Cohen is going to jail for lying to my committee. So obviously, step one is to re-ask him the questions that he felt he needed to lie to us about, when he testified in the last Congress. So we’re going to want to get to the truth, allow him to correct the record. And then, of course, the question is, okay, now that we know the truth, what are the follow-ups? It’s going to be an interesting week in that regard,’ he said Sunday on NBC’s ‘Meet the Press.’ 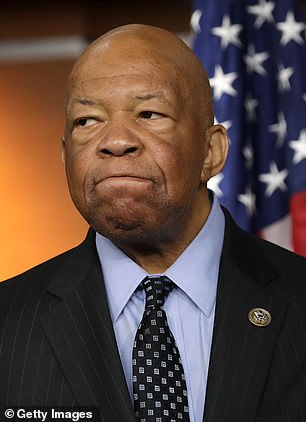 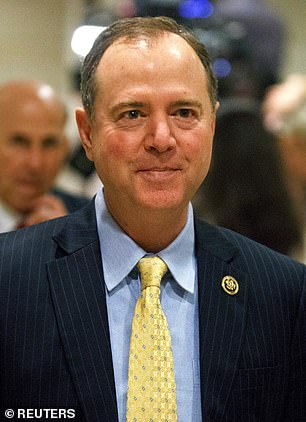 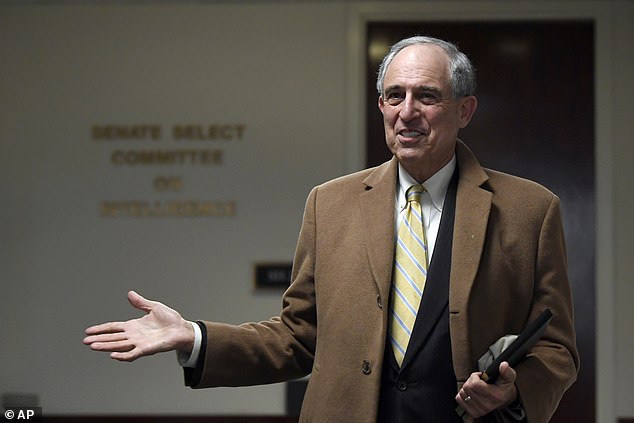 Himes also said Cohen could be more forthcoming behind closed doors than in Wednesday’s public circus.

‘I don’t think he’s going to say a lot that is classified. But he may have some things that he doesn’t feel comfortable saying publicly that he then wants to say either to the Senate or to the House Intelligence Committees, in closed session,’ he said.

Last week, Cohen got a two-month reprieve from his deadline to report for his three years in jail, with a judge giving him until May 6. One of the reasons cited was his upcoming congressional testimony.

Cohen received a three-year sentence in December for bank and tax fraud, lying to Congress and violating campaign finance laws.

Even though Cohen can’t talk about in public what he told Robert Mueller in the 70 hours he spent talking to that team for the special counsel’s Russia investigation, he will speak publicly about his relationship with the president.

‘I believe the issue in 2020 which Michael Cohen can speak to better than anyone is the man lacks character,’ Davis told ABC’s ‘The Investigation’ podcast. ‘He speaks in bigoted words in private, which Michael Cohen will tell you. He treats people badly. He has no moral character in defrauding people in his businesses, and going bankrupt, and taking cash out, and putting people out of work. He lacks the moral compass that we expect in our presidents.’

But Davis said Cohen will be able to talk about ‘what did you do for Mr. Trump for all those years and why.’

Trump’s legal team has already made their case against Cohen by painting him as an unreliable witness.

Both Trump’s lawyers and the president himself have pushed back against any comments Cohen may have made to Mueller or will make in public by labeling him as a rat and turn coat who can’t be believed.

Davis conceded that Cohen knows he has a ‘deep hole to climb out’ of in terms of credibility.

But he argued his client has seen the light and wants to make amends for his past work for the president.

‘He wouldn’t take a pardon if Trump pleaded with him to take it. Why? Because it would be dirty,’ Davis told ABC News. 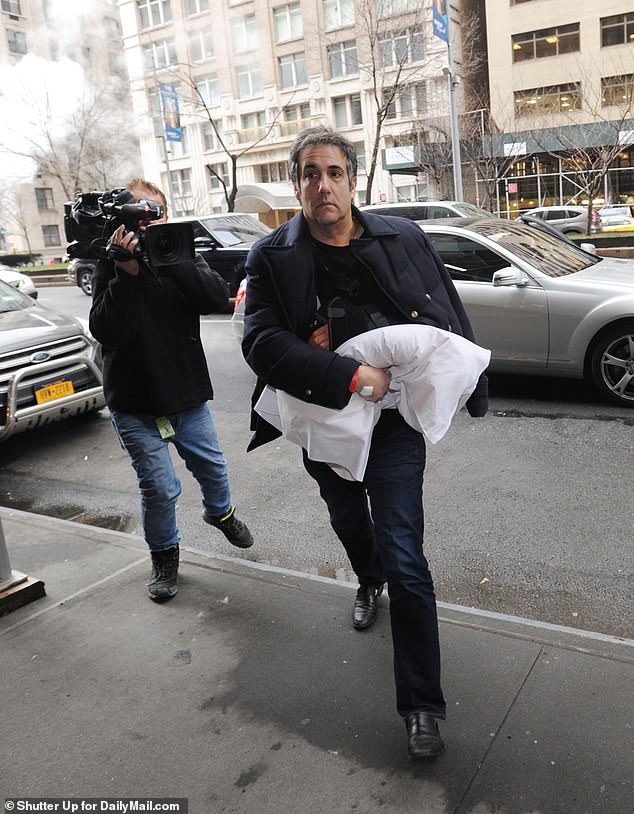 Michael Cohen seen with his arm in a sling

Cohen has been cooperating with the special counsel’s probe of Russia’s role in the 2016 election. The U.S. Attorney’s Office for the Southern District of New York was the lead federal prosecutor earlier this year when Cohen pled guilty to eight counts, including tax fraud and campaign finance violations – that stemmed from the special counsel’s investigation.

Cohen also has pleaded guilty to lying to Congress about the timeline of conversations he had with Russian officials about building a Trump Tower Moscow as part of separate investigation by Mueller’s team.

He was sentenced to three years in prison and is free on bail until that time.

Cohen’s guilty pleas included a charge of lying to Congress about a Trump Organization real estate project that was slated for Moscow, Russia and discussed through the fall of 2016 while the president was running for office.

He testified in a closed congressional interview that the project he pursued on Trump’s behalf was abandoned by the time of the Iowa Caucuses in January 2016; that would be consistent with Trump’s ‘political messaging.’

Mueller later filed documents revealing Cohen said he discussed the proposal with Trump on multiple occasions and with members of the president’s family, later in the year – even after Trump became the Republican nominee for president.

Cohen said he lied out of loyalty to Trump. 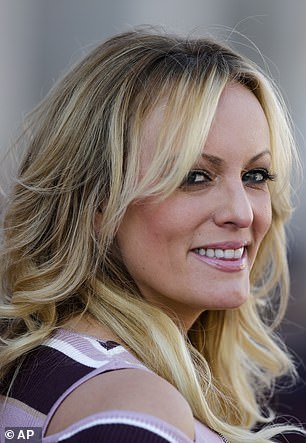 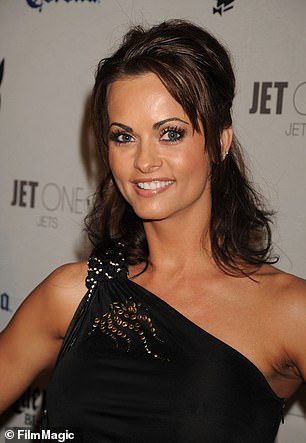 ‘I made these misstatements to be consistent with Individual 1’s political messaging and out of loyalty to Individual 1,’ Cohen said at his plea hearing late last year.

‘Individual 1’ is Mueller’s name for Trump in the investigation.

Cohen was also the central figure in a plot to buy the silence of pornographic actress Stormy Daniels, who claimed that she had an affair with Trump in 2006.

Daniels signed a nondisclosure agreement in exchange for $130,000 from Cohen, a transaction that he admitted was a violation of campaign finance laws since it amounted to an illegally large contribution benefiting Trump’s White House hopes.

He said in court that Trump directed him to make the payment, suggesting the president was guilty of a crime.

Cohen claims that at Trump’s request, he arranged for the publisher of The National Enquirer to pay McDougal – another self-described past Trump paramour – for the exclusive rights to her life story. The magazine never published anything, engaging in a practice known as ‘catch and kill’ in order to help Trump avoid new scandals in the final weeks of the 2016 campaign.

Trump has denied ever having a sexual relationship with either Daniels or McDougal.