Michael Cohen has been writing a tell-all book on President Trump and will be releasing it before the November election.

The former personal lawyer to Trump is behind bars after he admitted to tax evasion, bank fraud, and dirty payoffs in the lead-up to the 2016 election but Trump denied he instructed Cohen to give them hush money as they claimed they’d had affairs with him.

Now Cohen, 52, is ‘pissed’ and won’t hold back in a book he has been penning from behind bars in Otisville, New York, and intends to publish after he is released from prison to house arrest soon in order to help prevent the spread of coronavirus.

‘He told me he’s been writing a book and he’s pissed. He told me he is going to spill the beans. What has he got to lose now?’ comedian-and-actor Tom Arnold told The Daily Beast. 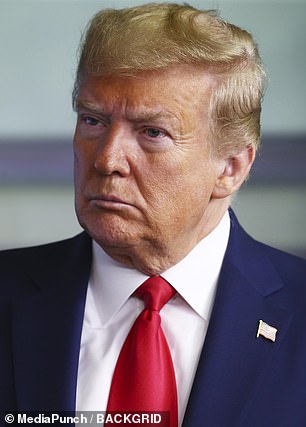 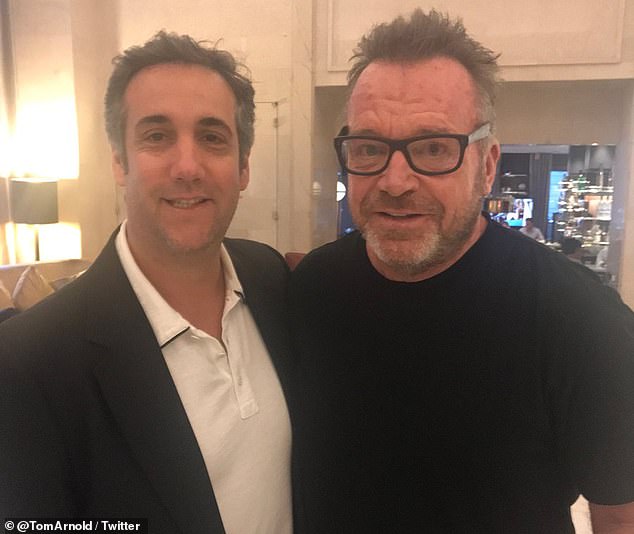 Comedian Tom Arnold (right) said: ‘He told me he’s been writing a book and he’s pissed. He told me he is going to spill the beans. What has he got to lose now?’

Cohen told the publication in February 2018 that he was shopping a book and had interest from publishers including Hachette.

At the time the book was tentatively titled, Trump Revolution: From The Tower to The White House, Understanding Donald J. Trump.

But in December 2018 he was ordered to spend three years in federal prison and in February 2019 he was disbarred.

In March 2019 Trump tweeted his acknowledgement of Cohen writing an expose.

‘Wow, just revealed that Michael Cohen wrote a ‘love letter to Trump’ manuscript for a new book that he was pushing,’ POTUS posted on social media. ‘Written and submitted long after Charlottesville and Helsinki, his phony reasons for going rogue. Book is exact opposite of his fake testimony, which now is a lie!’

Arnold added that Trump has been expecting Cohen to release a book.

Now Cohen is being let out early alongside dozens of other inmates, the release could be sooner than Trump anticipated.

‘It’s like Jaws—you don’t see Jaws very much, but you hear the music, and for Trump he knows Michael is coming and Trump better hear the Jaws music,’ Arnold said.

‘For 12 years, Michael cleaned up everything for Trump and his family. Stormy Daniels was a tiny moment in that. There’s so much more that will come out in the book.’

He believes it will be a ‘bestseller’.

Another person close to Cohen told the publication that the expose was a long time coming.

‘He has been using his time wisely inside to write a book and no one should be surprised as he’s always talked about writing a book,’ the source told The Daily Beast.

‘Michael’s stories about Trump are incredible. He has saved a lot of them for when the time is right and the time is now right.

‘Michael spent a long time with Trump—he is going to go into everything and he’s not going to hold anything back. He has paid his dues and he’s pissed he had to go to jail for this.’ 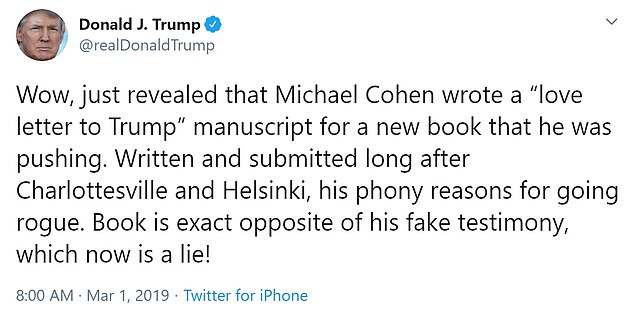 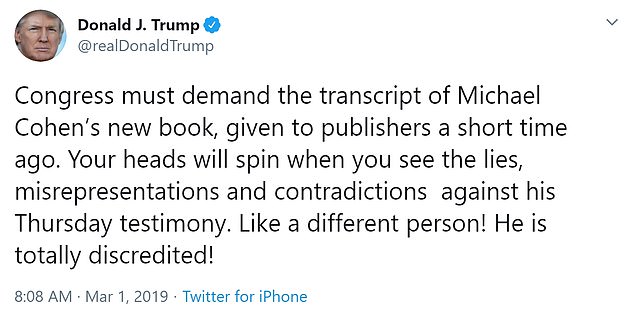 More than a year ago after Cohen’s sentencing, Trump tweeted about knowledge of him shopping a book

Cohen is expected to spend 14 days in quarantine once he is freed early.

Sources suggest he will have no problem shopping the book and publishers have estimated Cohen could get hundreds of thousands for it.

‘He was bragging he was going to have a one-hour television show on ABC and he said he would be like the Count of Monte Cristo and come back and get Trump,’ one of Cohen’s fellow inmates told The Daily Beast.

Cohen began serving his sentence last May and was scheduled to be released from prison in November 2021.

Cohen tried to get his sentence reduced in March but a judge shut him down.

‘That Cohen would seek to single himself out for release to home confinement appears to be just another effort to inject himself into the news cycle,’ U.S. District Judge William H. Pauley III wrote then.

‘Ten months into his prison term, it’s time that Cohen accept the consequences of his criminal convictions for serious crimes that had far reaching institutional harms.’ 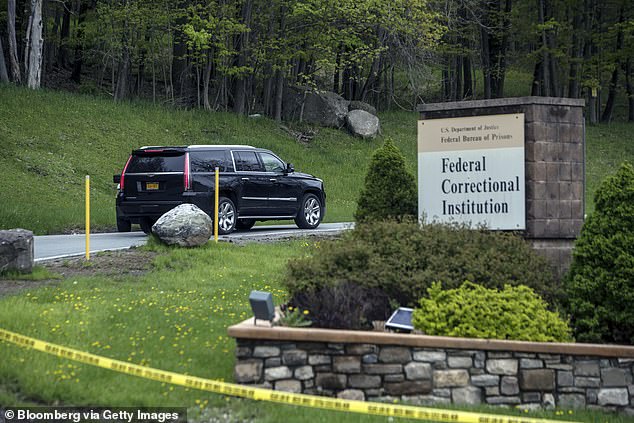 Cohen tried to get his sentence reduced in March but a judge shut him down. Now due to COVID-19 he and many other prisoners will be released from the Federal Correctional Facility in Otisville, New York (pictured)

It was shortly before 14 inmates and seven prison staff tested positive for COVID-19. Former New York state Senate leader Dean Skelos, 72, who was also serving a sentence at Otisville, is also expected to be released soon from prison to home confinement after testing positive for the coronavirus, prosecutors told a judge Wednesday.

Attorney General William Barr ordered the Bureau of Prisons earlier this month to increase the use of home confinement and expedite the release of eligible high-risk inmates, beginning at three prisons identified as coronavirus hot spots. Otisville is not one of those facilities.

The Bureau of Prisons said it had moved more than 1,000 inmates to home confinement since March 26. The agency said it is a ‘tremendous logistical lift that was accomplished through the marshaling of all of BOP´s resources.’

As of Thursday, 473 federal inmates and 279 Bureau of Prisons staff members had tested positive for coronavirus at facilities across the U.S. Eighteen inmates have died since late March.

On Friday, the Bureau of Prisons said it was moving about 111 inmates – most of whom are likely to qualify for home confinement or furlough – from the prison camp at Otisville into the medium-security prison at the facility so they could begin a quarantine period, which would be required before they could be released, as their records are reviewed.

Cohen once said he would ‘take a bullet’ for Trump. He was sentenced to three years in prison in 2018 for directing hush payments to pornographic film star Stormy Daniels and former Playboy model Karen McDougal, who claimed they had affairs with Trump. The president has denied having the encounters. 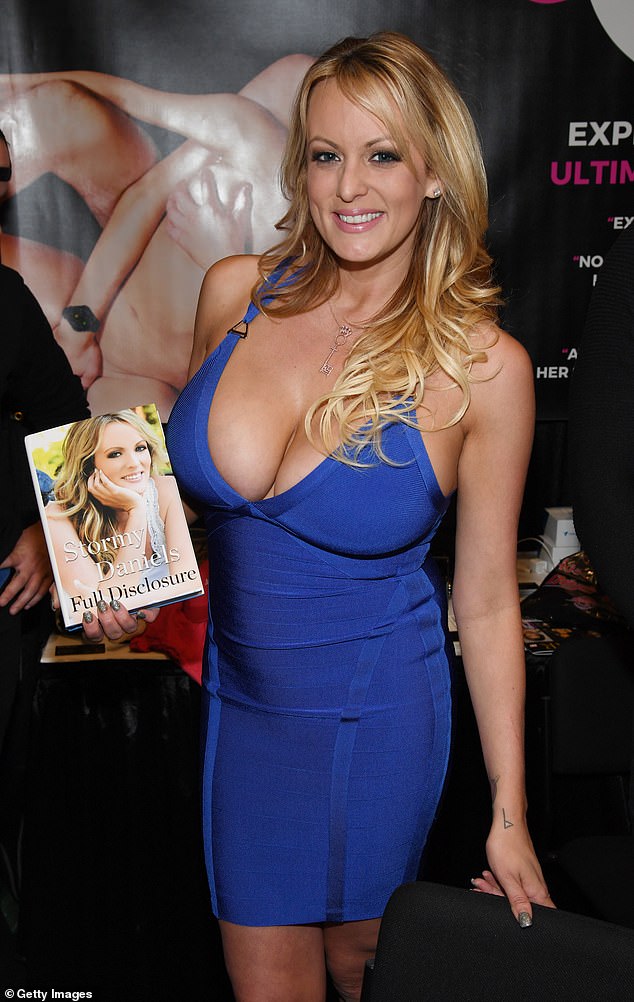 He was sentenced to three years in prison in 2018 for directing hush payments to pornographic film star Stormy Daniels (pictured in January 2019) and former Playboy model Karen McDougal, who claimed they had affairs with Trump