Campaigners have called for a fresh autopsy of historic IRA leader Michael Collins almost 100 years after his assassination.

Mystery has long surrounded his killing on August 22, 1922, when he was shot in the head near Beal na Blath in County Cork, during Ireland’s Civil War.

But new evidence about a suspect has led historians and forensic scientists to re-examine the case, with some calling for his body to be exhumed.

‘We should exhume the body and find out the nature of the wounds, otherwise we’ll be talking about this for another century,’ Paddy Cullivan, an academic turned film-maker, told the Guardian.

Mystery has long surrounded the killing of Michael Collins (pictured) on August 22, 1922, when he was shot in the head near Beal na Blath in County Cork, during Ireland’s Civil War

Collins led the original Irish Republican Army (IRA) as it took on British forces during Ireland’s war of independence between 1919 and 1921.

He managed to bring the Brits to a stalemate, forcing them into negotiations which ended with a treaty that freed 26 of Ireland’s 32 counties.

Collins was appointed Chairman and Minister of Finance of the provisional government which was responsible for the establishment of the Irish Free State.

He played a decisive role in devising a constitution, creating security forces and appointing a civil service.

However some IRA members refused to accept the deal with the Brits, leading to a civil war.

Collins was murdered aged 31 while on an inspection tour of Munster and searching for a basis for peace with IRA leaders opposed to the Treaty.

His convoy was ambushed and he was killed by a bullet to the head when he got out of his car to return fire.

But the lack of an inquiry or death certificate – and a lost autopsy report – has shrouded the death in mystery for almost a century.

Most agree that someone from the ambushing group fired the fatal bullet, however there are a range of theories as to the identity of the shooter.

Some posit the killing was the work of a skilled sniper given the shot was fired at dusk with poor visibility and from more than 150 metres away.

Others say it was a lucky shot or a ricochet.

The finger has also been pointed at anti-treaty leader Eamon de Valera, who was in the area at the time of the ambush.

But the jury is still out on whether the future taoiseach and president knew of the murder plot.

Others believe one of Collins’ comrades in the convoy – who had been drinking – shot him by mistake, or carried out the hit as part of a conspiracy by rivals. 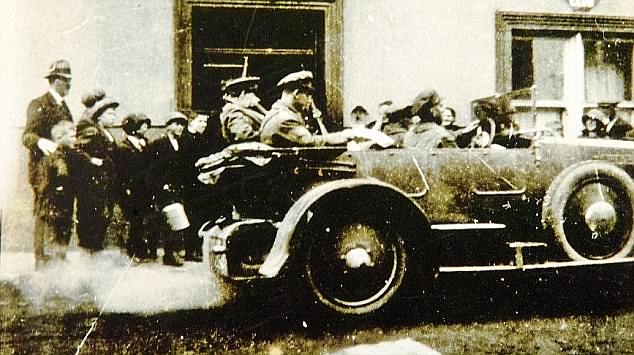 Collins was murdered aged 31 while on an inspection tour of Munster and searching for a basis for peace with IRA leaders opposed to the Treaty (Pictured: Collins with his convoy just hours before being ambushed)

Or was it the work of MI6, who wanted to prevent Collins from freeing the rest of the Irish counties, which today make up Northern Ireland?

Rumours have long suggested Denis ‘Sonny’ O’Neill, a marksman who served in the British Army during World War One, was behind the hit.

Mr O’Neill was part of the anit-treaty IRA and may have had motive – but Mr Cullivan recently unearthed evidence that he had returned from war with a 40% disability to his right arm, undermining his marksmanship.

Mr Cullivan’s own documentary, The Murder of Michael Collins, was unable to offer a prime suspect.

‘It’s incredible that the most important man in Ireland at that time doesn’t get an inquest or a death certificate,’ he said, ‘The whole thing is beyond strange.’

Diarmaid Ferriter, a leading historian who has published a book on the civil war, Between Two Hells, added that Collins’ death was surrounded by myth.

His last words are often said to have been: ‘Forgive them’, which Mr Ferriter said was unlikely.

He added: ‘Classic propaganda. You want to depict your fallen leader as beyond pure, generous even in death.

‘We forget the ordinariness of what happened. He was foolhardy to stop and return fire. There was drink taken. Mistakes made that seem obvious in retrospect.’

Pictured hours before his assassination: How the last photograph of IRA leader Michael Collins was found in an attic after 90 years 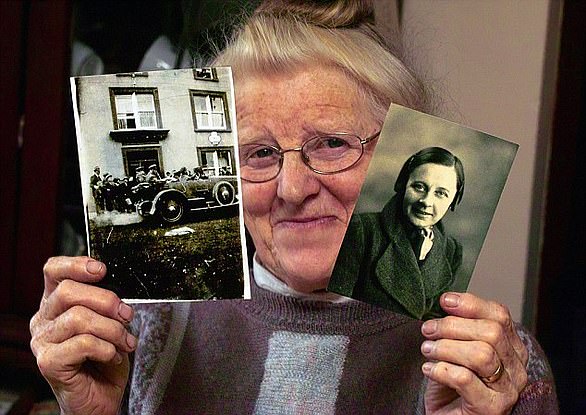 A photo of Michael Collins, taken just hours before his assassination rocked the country, turned up after more than 90 years in 2012.

Killed in an ambush later that evening, Collins is seen in the back of a touring car outside a hotel in Bandon, Co. Cork.

The remarkable photograph taken on August 22, 1922 by 18-year-old Agnes Hurley, only came to light after being discovered in the attic of a Dublin house.

The last photograph of ‘The Big Fellow’, as IRA leader  Collins was known, had been assumed to be one taken in Bandon the day before, on August 21.

Hurley also captured the scene of the shoot-out near Béal na Bláth the next day, showing a scrap of cloth on the ground believed to be Collins’s shirt collar.

Historians assumed no photo of the scene was taken.

Agnes ‘Aggie’ Hurley, from Mallowgaton in Bandon, used a brownie box camera and her remarkable collection of hundreds of photos spans 20 years dating from 1921. 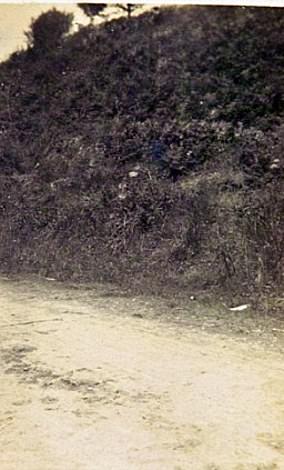 The photographer at Beal Na Blath the day after the death of Michael Collins was Agnes Hurley (left), niece of Mim O’Donovan, who owned the photographs. (Right) The scrap of cloth (centre right) is believed to be the blood-stained collar from Collins’ shirt 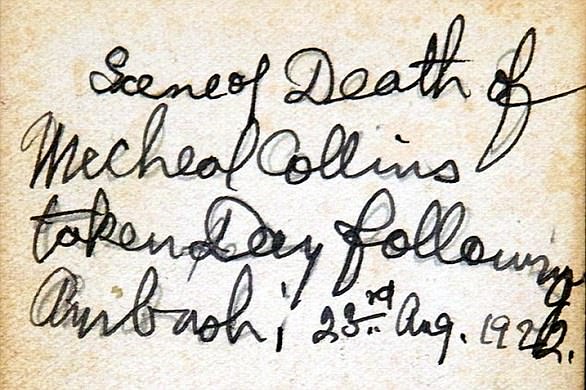 Her niece Mim O’Donovan, also from Bandon, took the pictures to the Revolutionary Decade Roadshow in Clonakilty, Co. Cork, organised by the History Department at University College Cork.

‘Aggie went to Béal na Bláth to see what had happened because they’d heard gunshots the previous day,’ she said at the time.

‘She was well informed of current affairs and if something was happening she would be there. She took hundreds of photographs over the years and she dated the back of every single one.’

Cork City and County Archivist Brian Magee described the find as ‘extraordinary’. ‘The fact that it  survived is remarkable,’ he added.

Collins is an influential figure in the history of twentieth century Ireland. He was born in Clonakilty, County Cork, and, after working in a number of roles in London, returned to Ireland to take part in the Easter Uprising.

He was elected as an MP for Sinn Fein for South Cork and Tyrone at the general election in December 1918.

During the Anglo-Irish war he was a key part of the IRA’s military campaign.

After the controversial treaty negotiations with Britain, he was appointed Chairman and Minister of Finance of the provisional government which was responsible for the establishment of the Irish Free State. He played a decisive role in devising a constitution, creating security forces and appointing a civil service.

He was murdered while on an inspection tour of Munster and searching for a basis for peace with IRA leaders opposed to the Treaty.

The photos were scanned and archived to form part of the public record of a crucial period in Irish history.