Michael D Higgins set to be re-elected as Irish president

Michael D Higgins is on course to remain Ireland’s president after exit polls suggested he had secured more than half of the vote.

An RTE poll suggested he received 58.1% of first-preference votes, while an Irish Times poll put him at 56%.

Despite the impressive figures, less than half of the electorate turned out to vote.

Former Irish Dragons’ Den star Peter Casey is expected to come a distant second with around 20 per cent of the first-preference votes – meaning Higgins is likely to be elected for another seven-year term.

More than 3,400 people were interviewed for the RTE poll by Red C outside 138 polling stations across the country on Friday.

The Irish Times poll, conducted by Ipsos/MRBI, questioned more than 4,300 voters outside 160 polling stations across the country.

The results of both polls, which were published at 10pm as polling stations across the country closed, indicate that Gavin Duffy secured the lowest number of votes at 2%.

More than 3.2 million people were entitled to vote in 40 constituencies across the country.

As well as deciding who they wanted to see in Aras an Uachtarain for the next seven years, electorates were also asked whether they wanted to remove the offence of blasphemy from the Irish constitution.

The exit polls suggest that the referendum will be passed by a significant majority.

RTE’s exit poll found that 71.1% said they had voted Yes and that 26.3% had voted No, while the Irish Times poll predicted that 69% had backed the proposal and 31% had voted against the change. 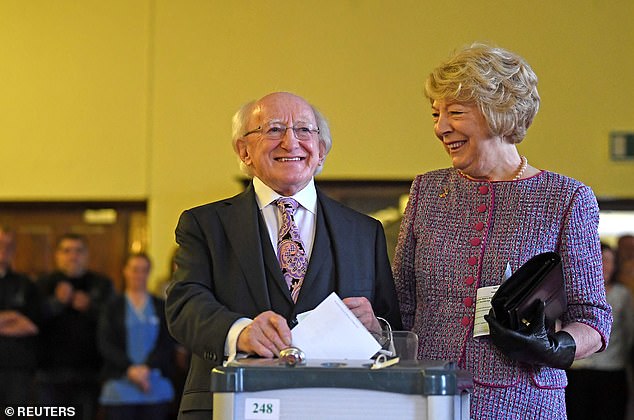 Opinion polls throughout the campaign consistently placed Mr Higgins as the favourite to win, despite being plagued by questions over presidential expenses.

During the campaign, Mr Higgins also came in for criticism over his use of the Government’s jet to travel from Dublin to Belfast.

Mr Casey faced calls to withdraw after he claimed Travellers were simply people camping on someone else’s land and that Ireland’s recognition of them as members of an ethnic minority was “a load of nonsense”.

It was Mr Gallagher’s second time running for the presidency after a failed bid in 2011. At the time he secured more than half a million first-time votes.

During the campaign, however, he was pressed over what he had done in public life in the past seven years.

Ms Ni Riada was forced to reject claims that she did not support the HPV vaccine, Ms Freeman was quizzed on a 130,000 euro loan she had received from donors to fund her campaign, while Mr Duffy faced questioned over his past driving convictions.

Mr Higgins is the country’s ninth president. He was elected in 2011.