Michael Gove today admitted UK trade with the EU after Brexit will not be ‘frictionless’ as Boris Johnson prepares to ask Brussels for an ‘off-the-shelf’ future partnership agreement.

Mr Gove, the minister for the Cabinet Office, said the government wanted trade with the bloc to be ‘as frictionless as possible’ as Britain gets ready to leave the EU at 11pm tonight.

But he conceded that the UK’s plan to diverge from some Brussels rules and regulations would mean the introduction of ‘some bureaucratic processes there that aren’t there now’.

Mr Gove said the EU had made clear that ‘you can only have fully frictionless trade if you accept all of their rules’ – something ministers have ruled out.

His remarks came as it was claimed Mr Johnson will use a big speech next week to ask the EU to negotiate a post-Brexit trade deal with the UK similar to the one Brussels struck with Canada.

Such a deal would allow for the almost tariff-free movement of goods but would not include services and would require customs checks at the border.

Michael Gove, pictured in Downing Street on January 8, today conceded trade with the EU after Brexit will not be frictionless

A Canada-style ‘off-the-shelf’ deal was offered by the EU to Theresa May’s government but it was rebuffed in favour of seeking a more complicated arrangement.

The main benefit of a Canada-style deal would be that it could be negotiated relatively quickly.

However, there is a major road block to agreeing such a deal in that the EU has said it would only agree such terms if the UK agrees to stick with Brussels rules and regulations.

The so-called ‘level playing field’ provision will be a massive sticking point because the government has said the UK must be free to do its own thing after Brexit.

Writing in The Times they said: ‘Without a level playing field on environment, labour, taxation and state aid, there cannot be the highest quality access to the single market.’

Mr Gove told BBC Breakfast this morning that the UK will be free to go its own way on rules and regulations after Brexit.

‘We voted to be independent. Now, we want to have as close as possible relationship with the EU and the approach that we want to take is built on the relationship that they have with Canada.

‘That means that we want to have a relationship where there are ultimately no tariffs, no quotas on our trade but there will be some regulations that will differ in Britain, we will do things in a way which is better for our economy.

‘That may mean that when it comes to trading with Europe there are some bureaucratic processes there that aren’t there now.

‘We will do everything possible to minimise the friction in the interests of our economy.’ 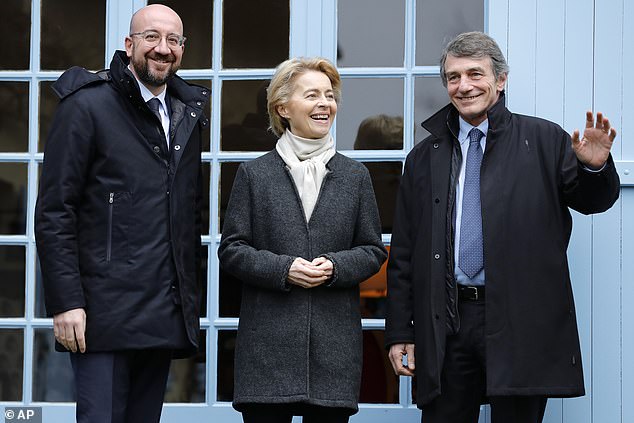 Charles Michel (left), Ursula von der Leyen (centre) and David Sassoli (right), pictured in Paris yesterday, have said ‘without a level playing field on environment, labour, taxation and state aid, there cannot be the highest quality access to the single market’ for the UK after Brexit

He added: ‘Critically, as we leave the EU we will be able to set the rules in the interests of the British economy and that means that we will see all sorts of procedures, all sorts of bureaucracy that in the past have held British business back, that can go.’

Mr Johnson is expected to set out the UK’s aims for trade talks with the EU in a major address next week.

The suggestion that the PM will ask for an ‘off-the-shelf’ deal is likely to spark concern among businesses because such a relationship with the EU would not be as close as the one originally envisioned by Mrs May.

The Treasury previously forecast that a Canada-style Brexit deal would result in the UK economy being almost five per cent smaller over a period of 15 years when compared to if Britain had remained a member of the bloc.