Michael Gove is to come out of isolation tomorrow – nearly a week early.

It came as the minister was seen jogging in a park near his London home, sparking fears he was breaking lockdown rules.

Anyone who lives with someone who shows signs of the virus is banned from going out for any reason for 14 days.

Michael Gove (pictured) is to come out of isolation tomorrow – nearly a week early. It came as the minister was seen jogging in a park near his London home

When it was pointed out that the ban included leaving home for exercise, Mr Gove revealed his daughter had been tested and did not have the virus.

He said he received special permission from Chief Medical Officer Chris Whitty for his daughter to be tested so he could return quickly to full Government duties.

Mr Gove revealed on Tuesday he had gone into isolation for a fortnight.

His daughter first had symptoms on April 5.

It now transpires that within 24 hours Mr Whitty had approved a request by Mr Gove for his daughter to be tested. 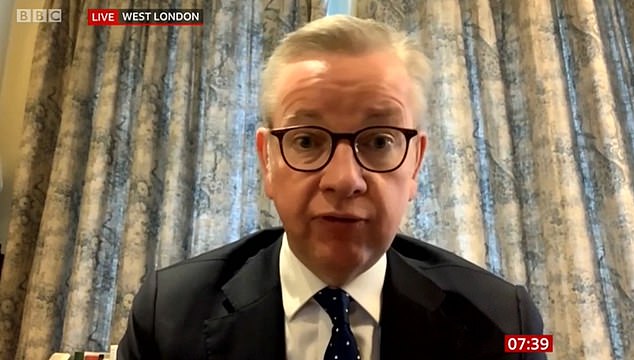 Mr Gove claimed he was not flouting lockdown rules, saying that he received permission from Chris Whitty to have his daughter tested. She did not contract the virus

By Wednesday the NHS test came back negative.

A source close to Mr Gove said: ‘He sought the CMO’s advice about what he should do at the suggestion of officials given he’s one of the Cabinet ministers leading the Covid-19 response. On Monday, the CMO advised that Michael’s daughter should be tested after displaying mild symptoms.

‘She was tested on Tuesday and the result came back negative on Wednesday afternoon, at which point the household isolation rules no longer applied to the family.’

When first asked yesterday about his jog, Mr Gove insisted the 14-day self-isolation rule affecting people such as him did not stop him jogging.

He said the advice to him from Whitehall on Wednesday was: ‘One must not leave home for any reason other than to exercise once a day, but stay at least two metres or three steps away from other people.’

But he changed his story when it was pointed out this violated Public Health England rules for people self-isolating for 14 days.

They ban leaving your home for exercise, including ‘public spaces’ such as Marcus Garvey Park in Hammersmith where he was photographed yesterday morning.