The Justice Secretary insisted the Budget was progressive and radical and a package he would ‘enthusiastically’ vote for when it is tested in the Commons next week.

Mr Gove said he backed Mr Duncan Smith on Brexit and warmly endorsed his work in Government to reform benefits and help people back to work.

But as Mr Osborne’s Budget unravels and the Tory civil war over Europe explodes to greater heights, Mr Gove pleaded with his party to put unity first. 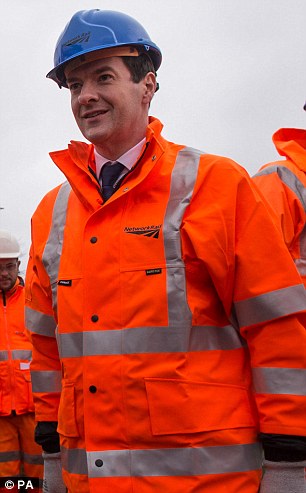 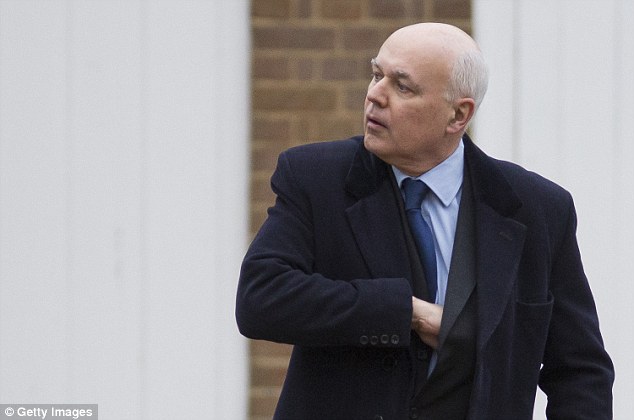 Iain Duncan Smith, pictured leaving home today, is to set out the reasons for his resignation as work and pensions secretary in a TV interview today

In a column for the Sunday Telegraph, Mr Gove said: ‘David (Cameron) has shown extraordinary generosity of spirit in allowing ministers to campaign against him – and for Brexit – while still remaining at their posts.

‘The country therefore has the chance to make this momentous decision – after a fair and open debate – because we have a majority Conservative Government.

‘And after this country has made its decision we’ll need a strong, united and resolute Government not just to steer Britain through new times internationally, but also to continue with reforms to our economy, welfare and education which are vital to our future.’

Mr Gove insisted he ‘can’t and won’t’ take issue with with Mr Osborne or Mr Duncan Smith on their key policy directions and choices.

Of the former work and pensions secretary, Mr Gove said: ‘Few politicians are admired enthusiastically by both Nick Clegg and Norman Tebbit. Indeed I suspect Iain is the only one.

‘He has earned the right to make his own decisions on matters of high principle.’

And turning to the Chancellor, he added: ‘He is a brilliant Chancellor who has not just fought to repair the nation’s finances after years of mismanagement, he’s also a thoughtful and considerate social reformer.’

In a letter to Sky News, the Tory Baroness said she was ‘extremely shocked’ at the manner of her former boss’s resignation. 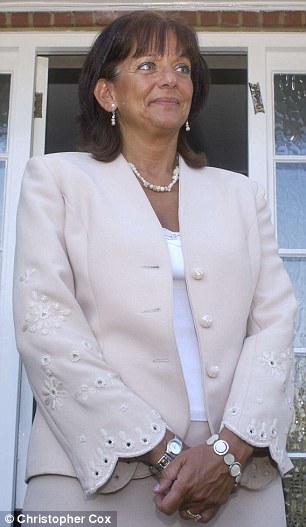 She said: ‘Having worked alongside him as a minister in the Department for Work and Pensions, I have seen that he championed the very package of reforms to disability benefits he now says is the reason he has resigned.

‘I’m particularly saddened that this really seems to be about the European referendum campaign rather than about DWP policy.

‘He seems to want to do maximum damage to the party leadership in order to further his campaign to try to get Britain to leave the EU.’

Mr Duncan Smith blasted proposed changes to the personal independence payment which were due to cut an average of £3,500 a year from 340,000 people.

He said: ‘I have for some time and rather reluctantly come to believe that the latest changes to benefits to the disabled and the context in which they’ve been made are, a compromise too far.’

In a direct attack on Mr Osborne, he said: ‘Too often my team and I have been pressured in the immediate run up to a budget or fiscal event to deliver yet more reductions to the working age benefit bill.

‘There has been too much emphasis on money saving exercises and not enough awareness from the Treasury, in particular, that the government’s vision of a new welfare-to-work system could not be repeatedly salami-sliced.’

He concluded: ‘I hope as the government goes forward you can look again, however, at the balance of the cuts you have insisted upon and wonder if enough has been done to ensure ‘we are all in this together’.

In response, Mr Cameron said he was ‘puzzled and disappointed’ at the resignation – pointing out the contentious benefit reform had been pulled for further work hours earlier.

The Mail on Sunday today revealed the pair had a furious row hours before Mr Duncan Smith’s resignation became public at around 9pm on Friday.

Stephen Crabb was appointed as the new Work and Pensions Secretary yesterday, with Alun Cairns replacing him as Welsh Secretary.