A former business partner of Michael Jordan who helped the NBA legend to open his ultra-exclusive golf club in Florida has been indicted on seven counts of fraud in a separate venture.

Donald Mudd, who goes by D.E., 62, and an alleged accomplice are accused by federal authorities of stealing nearly $1 million from a manufacturing company by filing phony invoices during a five-year period.

Like the legendary six-time championship winner with the Chicago Bulls and subject of the 10-part ESPN documentary The Last Dance, Mudd is a long-time resident of Chicago and South Florida with a keen interest in golf.

According to a copy of the indictment obtained exclusively by DailyMail.com, Mudd and an alleged accomplice swindled New York-based Momentive Performance Materials, a sealant and construction chemicals manufacturer, out of an estimated $951,755.

The indictment isn’t clear on how the feds became aware of the alleged scam, but it spells out how it supposedly took place.

Donald Mudd has been indicted on seven counts of fraud for stealing nearly $1 million from a manufacturing company by filing phony invoices for work that was never done. He’s pictured with his wife Judy 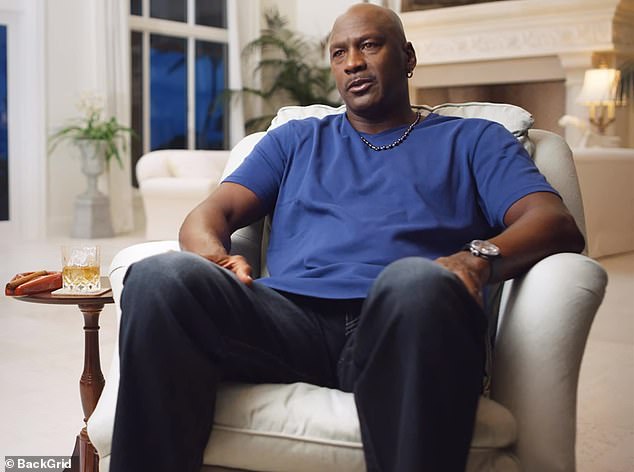 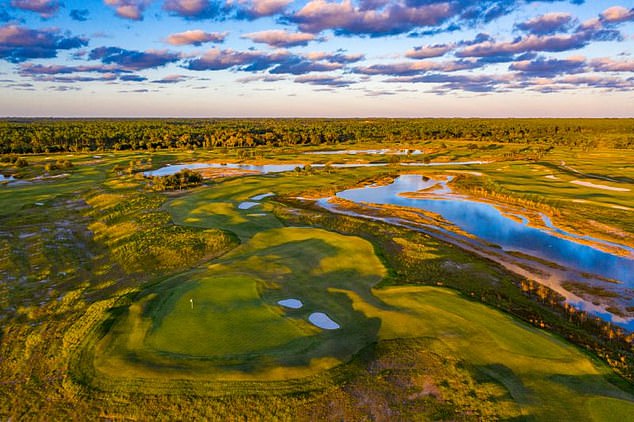 Jordan’s golf club The Grove XXIII (pictured) is distancing itself from Mudd, saying: ‘Mr. Mudd has no other connection to the club in any other fashion than through membership’

His friend Rod Hawkins was the general manager of Momentive’s sealant business unit, according to his LinkedIn profile. 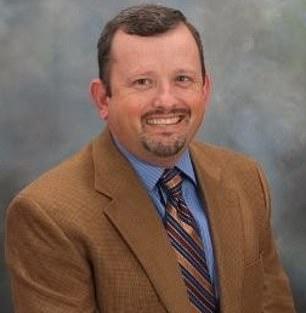 Mudd allegedly presented invoices for work that wasn’t done and Hawkins eased them through the payment process. In exchange, Mudd allegedly paid kickbacks to small companies that Hawkins owned with his wife.

‘It was part of the scheme that Mudd and Hawkins obtained at least approximately $951,755 from the victim company through a false billing and kickback scheme in which the defendants fraudulently caused the victim company to issue unauthorized payments to entities controlled by Mudd,’ the indictment reads.

‘After which Mudd directed a portion of the stolen funds back to Hawkins, or entities controlled by Hawkins, through various false and fraudulent means,’ it adds.

One of the seven counts of fraud  and wire fraud charges, according to the indictment, is for a $500 wire transfer that Mudd allegedly made to Hawkins in a hotel in California’s Napa Valley.

The criminal case is currently pending because of the coronavirus pandemic.

If convicted, the men face a yet-to-be-determined prison sentence as well as the forfeiture of assets worth nearly $1million.

Mudd did not return calls for comment left at his apartment in Jupiter, Florida, as well as on his cellphone. Vadim Glozman, his lawyer, declined comment.

Estee Portnoy, Jordan’s business manager, responded with this statement: ‘DE Mudd is not a partner with Michael Jordan in any golf venture.’

Mudd was the outgoing president of another high-profile golf club a few miles away when, along with Jordan and other investors, he started building The Grove XXIII Golf Club in Hobe Sound, Florida, in 2016.

The roman numerals in the club’s name refer to Jordan’s jersey number with the Bulls, 23. 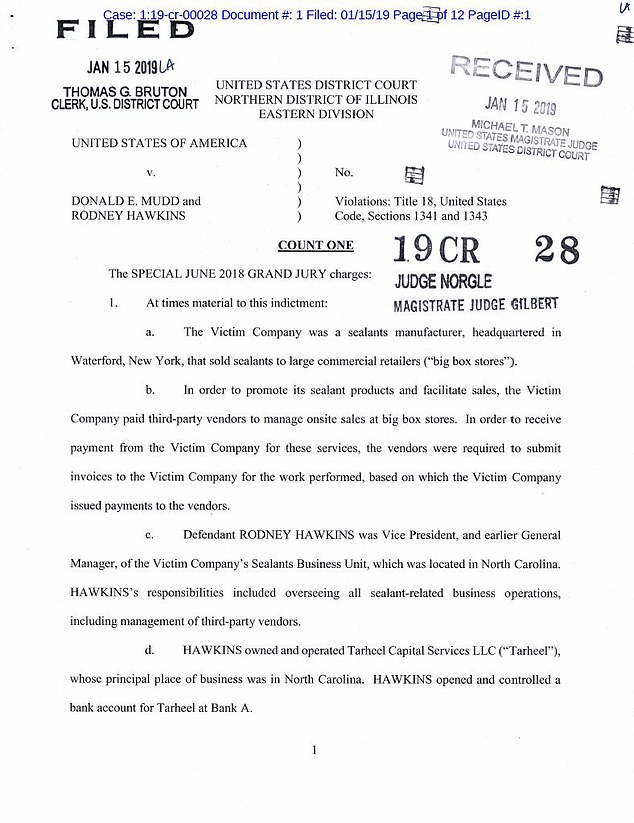 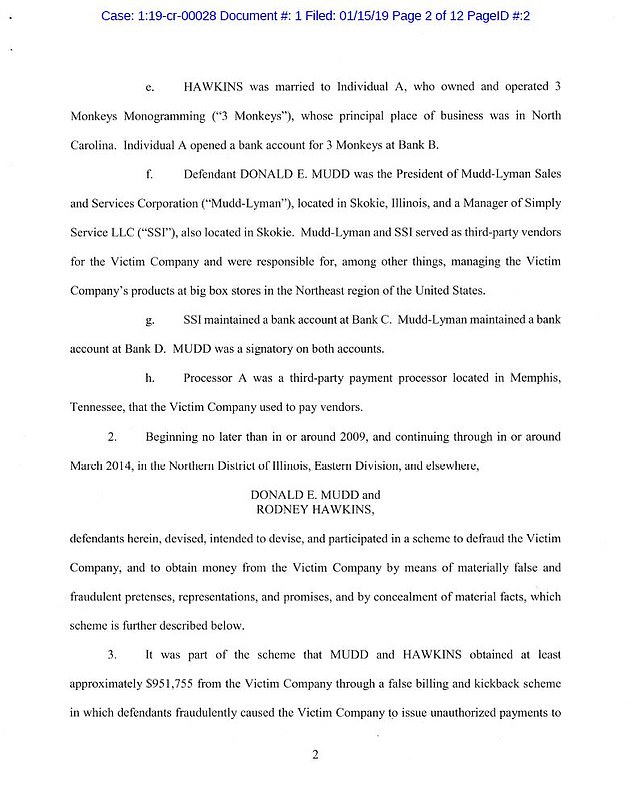 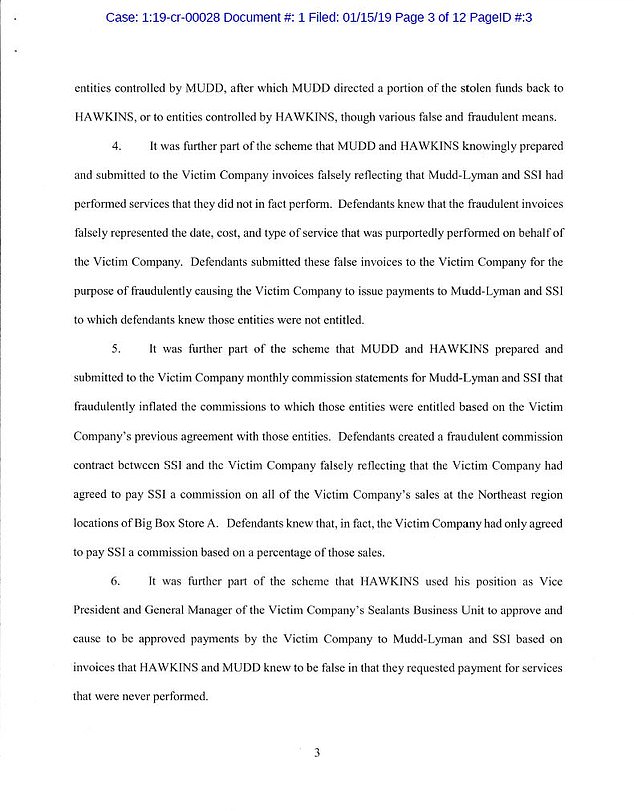 According to a copy of the indictment obtained exclusively by DailyMail.com,  Mudd allegedly presented invoices for work that wasn’t done and Hawkins eased them through the payment process 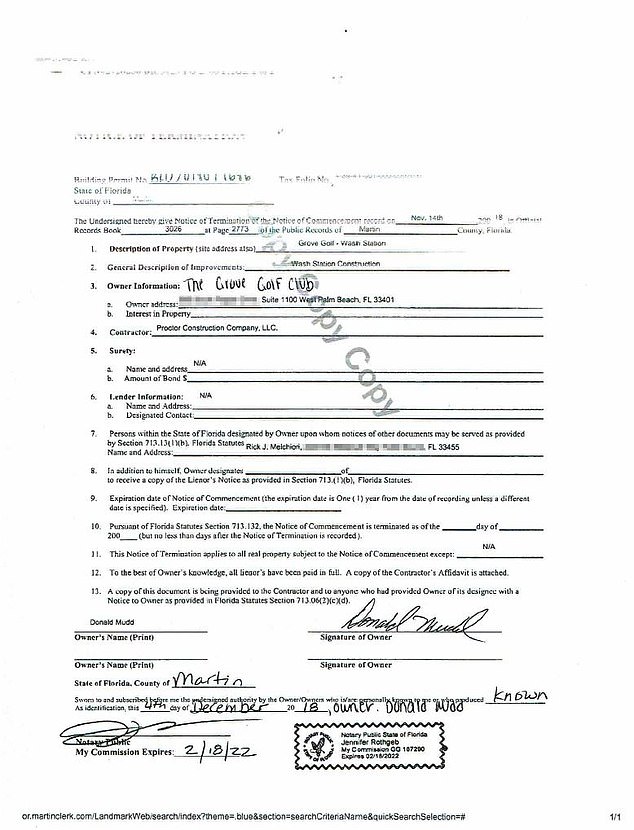 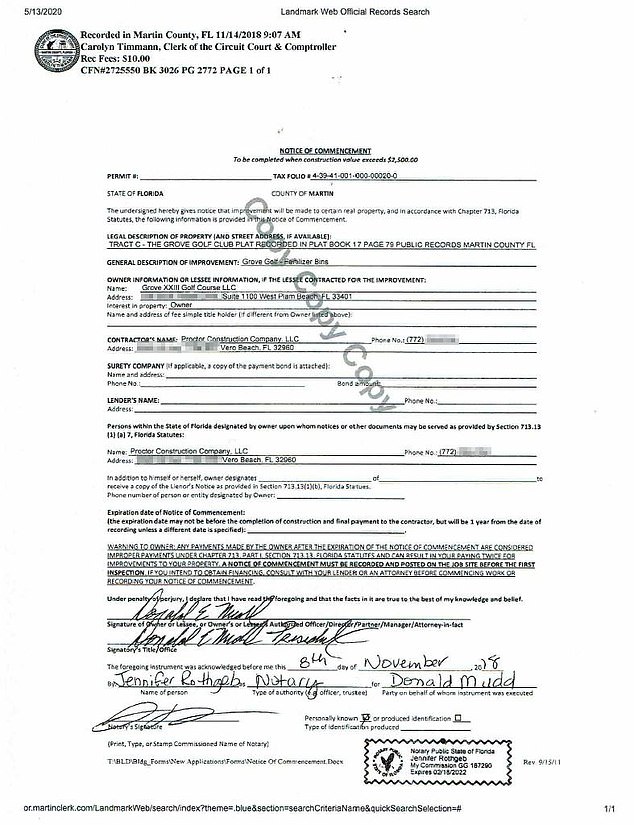 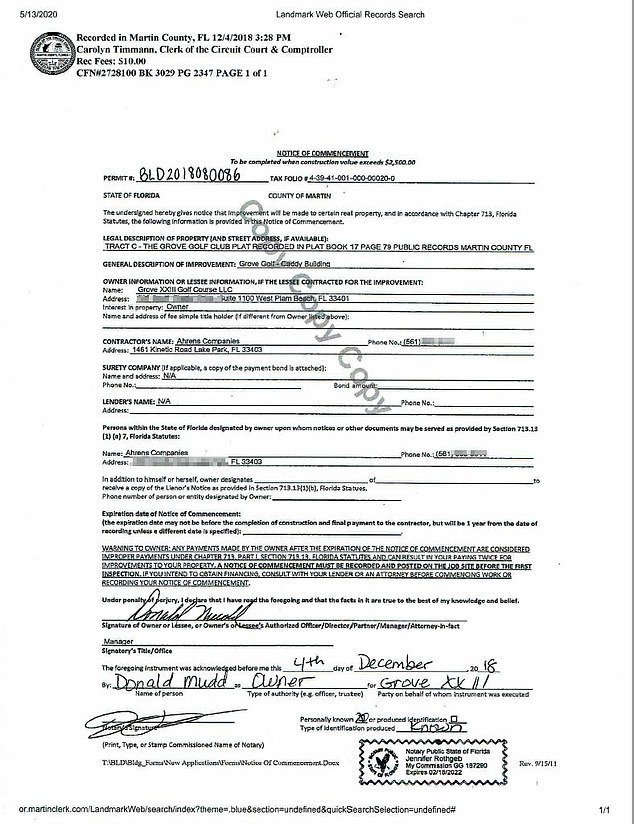 These documents obtained by DailyMail.com show three different instances from 2018 where Mudd referred to himself as an ‘owner’ of The Grove XXIII golf club

It took almost three years for the greens on 226 acres of abandoned citrus groves to be ship-shape and a breathtaking modern-styled clubhouse to open. A hand-picked membership of 75 people started playing late last year.

Modeled after the course at Shinnecock Hills, the Long Island home of the U.S. Open, The Grove XXIII quickly found a place in an area where top-flight golf courses are a dime a dozen.

According to published reports, Jordan opted to build his own facility because he thought his fellow duffers on the course near his mansion at The Bear’s Club -developed by links great Jack Nicklaus in Jupiter – moved too slowly.

Jordan still lives at The Bear’s Club, in a 26,000-square-foot, 9-bedroom house currently worth an estimated at least $21 million.

But now, with an estimated wealth of $2.1 billion, Jordan has his own club and his foursomes have immunity from angry golfers when they jump ahead to the next hole.

With Jordan busy running the Hornets, the baby-blue Bentley-driving Mudd was an early frontman for 18-hole The Grove XXIII.

He signed official documents pertaining to the club as ‘owner’ or ‘manager.’

In the local media, Mudd was described as the ‘project representative’ as a reported 24 initial investors and Jordan put in a total $20million to see the club off.

Mudd has been edged out from leadership duties at The Grove XXIII, according to the club’s general manager. Pictured is a rendering of the club house

Mudd moved to The Grove after resigning as president of The Medalist, a nearby exclusive club co-founded and designed by Australian golf great Greg Norman.

Mudd’s time there was marred by a feud with Norman, then the Great White Shark’s resignation and eventual return to The Medalist.

Mudd has now been edged out from leadership duties at The Grove XXIII, according to the club’s general manager.

‘We don’t comment about anything pertaining to our membership,’ GM Kenneth Weyand wrote in a text message. ‘Mr. Mudd has no other connection to the club in any other fashion (than through membership).’

Former New York Giants star football player Tucker Frederickson, a high-profile luxury developer who crossed paths with Mudd, said he has not seen Mudd in four years and declined to discuss the indictment.

But Frederickson did say: ‘I’m not surprised.’ 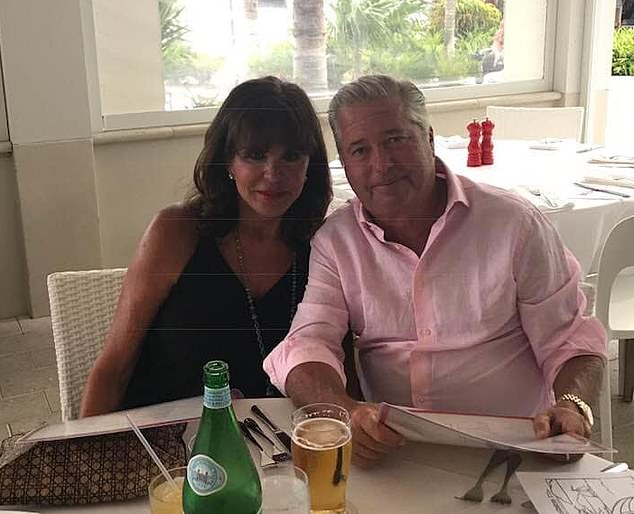 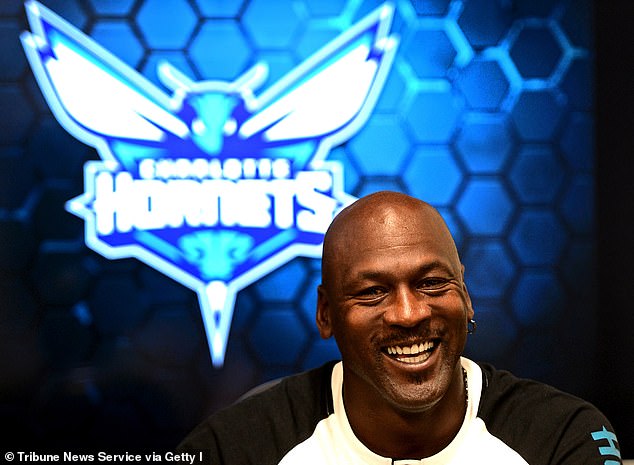 Jordan was busy running the Charlotte Hornets, leaving Mudd to run the construction of his golf course The Grove 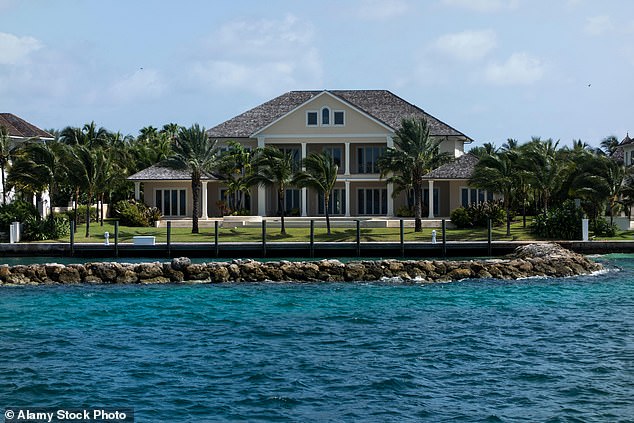 Jordan still lives at The Bear’s Club in Jupiter, Florida, in a 26,000-square-foot, 9-bedroom house currently worth an estimated at least $21 million

Even public officials are distancing themselves.

Martin County Commissioner Harold Jenkins said Mudd ‘might have been there’ when he and other politicians got a tour of the property.

‘I just don’t remember the gentleman,’ Jenkins said, ‘but I’m concerned when anybody is indicted for anything in Martin County.’

It’s not, meanwhile, the first time that the background of a golf associate of Michael Jordan includes criminal entanglements.

The most famous was mentioned in an early episode of ESPN’s Last Dance.

In 1992, Jordan ended up in the witness stand of a drug-money laundering trial in Charlotte after a $57,000-check from a Jordan company to golf hustler James Slim Bouler was found by federal investigators.

Jordan claimed the check was for a loan to Bouler to open a driving range.

Instead, Jordan eventually admitted, the check was to cover Jordan’s golf and poker gambling losses during a three-day outing 1991 with Bouler.