Michael Knighton, who came close to buying Manchester United in the 1980s, claims to be planning an astonishing ‘hostile’ bid to buy out the Glazer family.

The American owners are under increasing pressure to sell the Old Trafford club following a disappointing sixth-place finish in last season’s Premier League.

Fan groups have protested against their ownership at recent home matches with anti-Glazer chants filling the air.

But 70-year-old Knighton, who famously juggled a ball on the Old Trafford pitch in 1989, is apparently drawing up a bid to buy the Americans out in a hostile takeover.

The Glazers are highly unlikely to sell but Knighton’s offer reflects growing discontent with their ownership.

‘We are a club in crisis and we all know the reason why,’ Knighton told Man Utd The Religion on YouTube.

‘We have an inept and frankly useless ownership who know little about this game of football.

Michael Knighton, who famously juggled a ball on the Old Trafford pitch amid his failed attempts to buy Manchester United in 1989, is apparently lining up another bid 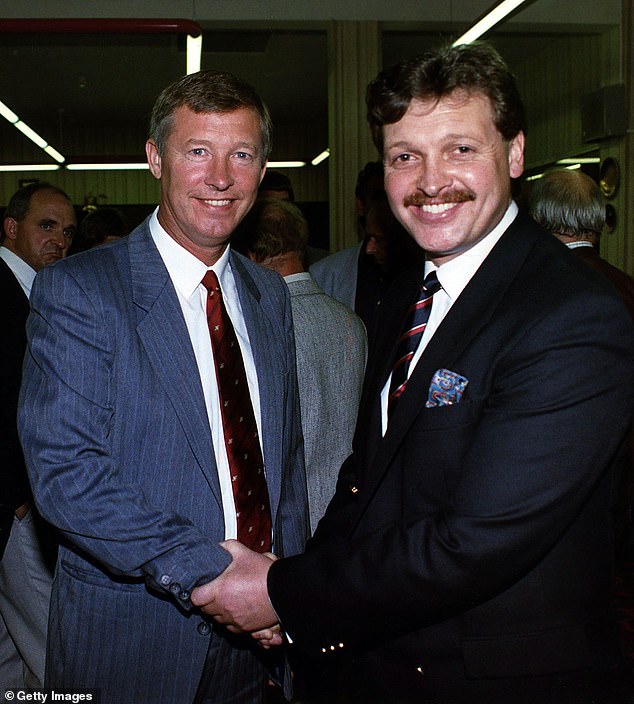 ‘Everyone knows that we need new ownership of this football club and that is my aim and those are my objectives.

‘I am making good progress, continuing to talk to the people, I have got some good pledges and good finance.

‘We are now working on the offer document. Remember, it is a hostile bid – that simply means that the club isn’t officially for sale.

‘But my intention is to present these owners with a legitimate, potent and commercial offer to say: ‘You have run out of road, it’s time go, because your time is up’. 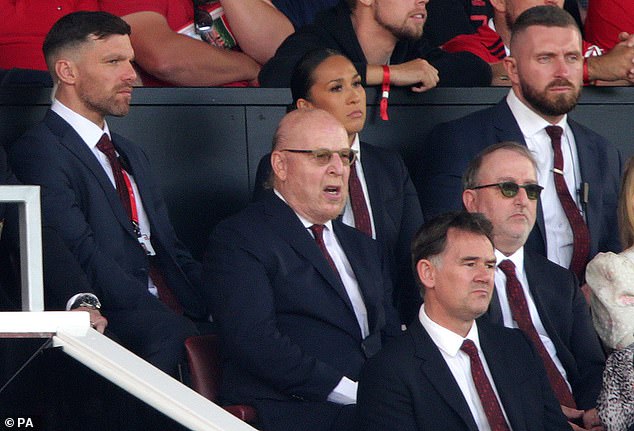 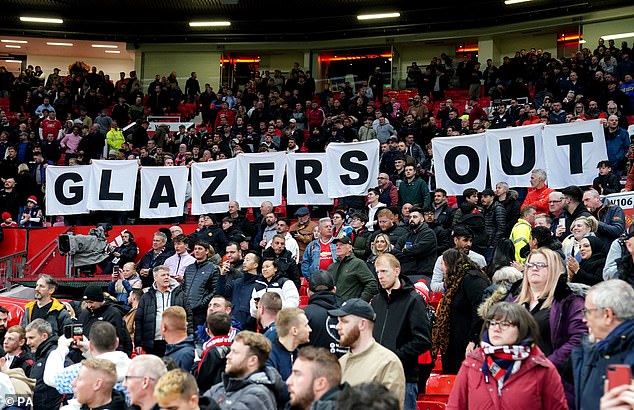 ‘And frankly, the fans worldwide have had enough of this regime. The exciting feeling of a new season, which we all have, and that balloon of excitement that is there, it was all burst when we quickly saw the performance against Brighton.

‘Quite honestly, we could have played the Lionesses and they would have got a better result.

‘The club is in crisis and it will remain in crisis while we have this current ownership. That is the situation.’

The Glazer family, who took over the club in a heavily-leveraged £800m buy-out back in 2005, insist United are not up for sale.

But Knighton added: ‘We need to rid our football club of this ownership as they have had their day, time has run out and we have had 17 years of disappointment, really. It is time for them to go. 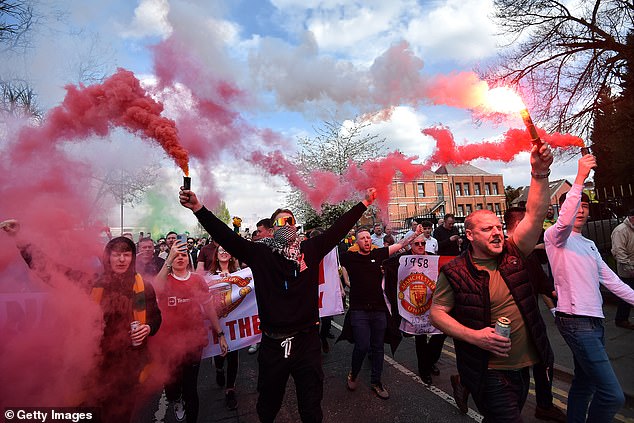 ‘We need to repair our stadium and put our club back where it belongs. Not among these also-rans. We are in crisis and it won’t alter until they go.

‘We will make a formal hostile bid.’

On Sunday ahead of United’s opening Premier League game against Brighton, thousands of fans protested against the Glazers and forced the megastore at Old Trafford to close for a time. 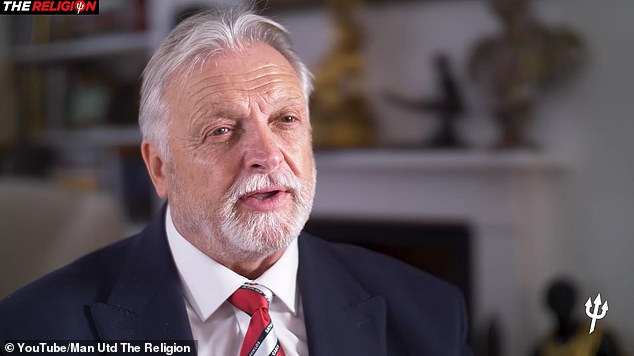 ‘My consortium is ready and waiting, the funds have been pledged, the offer document is being drawn up and it will be presented.

‘We are still waiting for the great Sir Jim Ratcliffe to come forward because he solves all our problems and makes my job redundant.

‘But until Jim comes, my consortium will be placing their bid very shortly. That I guarantee.’

United endured another turbulent campaign in 2021-22, finishing sixth to qualify for the Europa League and missing out on lucrative Champions League football.

Erik ten Hag has come in as their new manager but United have failed so far to sign his No 1 transfer target, Frenkie de Jong of Barcelona.

United lost 2-1 at home to Brighton in their season opener on Sunday afternoon.

Knighton, who made his fortune in property, shot to prominence in August 1989 when he made a takeover bid of £20million for United, which was a record bid for a British football club at the time.

The offer was accepted by chief executive Martin Edwards and Knighton pledged to invest £10m in Old Trafford and restore United to former glories on the pitch.

Knighton also recognised the off-field potential of United, predicting they would be a £150m business within 15 years (as it happened the Premier League and much success would make them a £1bn business within 11 years).

His business plan identified several areas for development – such as television rights, merchandise and a hotel – despite the fact United hadn’t won a league championship since the late 1960s.

Ahead of a match against Arsenal at the beginning of the 1989-90 season, Knighton juggled a ball on the Old Trafford pitch in front of 47,000 fans while dressed in full United kit. 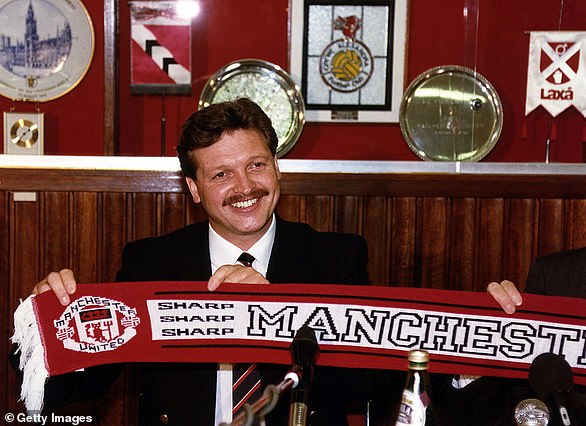 It was at that moment, Edwards admitted afterwards, he realised a mistake had been made in selling the club to Knighton.

‘I was horrified,’ he later said. ‘Absolutely horrified. I couldn’t believe what I was seeing. I kept saying to myself, ‘What the hell have I done?’

‘I realised that I’d made a big mistake. The other directors felt the same. They cringed and began to turn on Knighton.’

But when Thornton and Cohen withdrew their cash in mid-September, the takeover collapsed despite Knighton’s frantic attempts to find other investors.

It quickly and embarrassingly became apparent that Knighton didn’t have the cash to see through the buy-out.

‘He’d proved that he had the financial backing, but then he fell out with the other two partners because they would have side-lined him eventually,’ said Edwards.

‘Knighton realised what was going on and he wanted to be number one. The backers pulled away. When the pressure came on, Knighton couldn’t deliver the money.’

As the takeover deadline approached, Knighton abandoned his bid in exchange for a seat on United’s board.

In 1992, he went on to buy fourth-tier club Carlisle United.