‘The Trump family in orange jumpsuits’: Michael Moore reveals his top wish for 2019 is to see Don Jr and Jared Kushner locked up

Documentary filmmaker Michael Moore has revealed his New Year’s wish for President Donald Trump’s family members to be locked up.

Appearing on MSNBC’s All In With Chris Hayes on Friday night, Moore said his top hope for 2019 is to see ‘as many members of the Trump family in orange jumpsuits as possible.’

‘It’s really the wrong way to end such a festive time of the year with such animosity toward those who would do wrong to this country, but yes,’ Moore confessed.

Hayes and Moore went on to speculate that Trump’s eldest son Don Trump Jr and son-in-law Jared Kushner could be targets for indictment.

Appearing on MSNBC’s All In With Chris Hayes on Friday night, Moore (above) said his top hope for 2019 is to see ‘as many members of the Trump family in orange jumpsuits as possible’

Trump Jr has reportedly confided to friends that he fears being indicted by special counsel Robert Mueller.

Some have speculated that Trump Jr could be in legal jeopardy over his statement under oath that he never informed his father about an infamous meeting with with Russians in Trump Tower in 2016.

Though no evidence has emerged indicating that the meeting itself was illegal, Trump Jr could be charged with lying under oath if investigators find evidence that he did communicate with his father about the meeting.

Trump’s critics have also insisted that Kushner could be in legal jeopardy from Mueller’s probe. Kushner was also present for the Trump Tower meeting, and his contacts with Saudi Arabia, the United Arab Emirates, Qatar and Israel are reportedly under scrutiny by Mueller, though it is unclear what potential crimes the special counsel may be investigating. 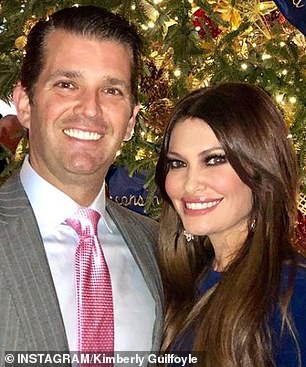 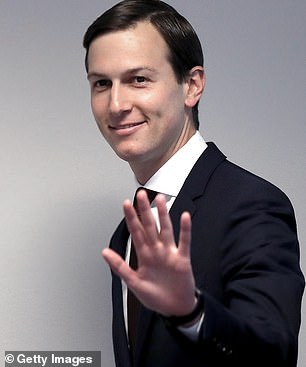 Moore, whose latest film Fahrenheit 11/9 criticizes Trump’s election, went on to say that he didn’t believe the President himself would be indicted.

‘Here’s probably what won’t happen, especially New Yorkers know this because Trump got away with everything for like 40 years, that streak shouldn’t end this year, more than likely, because I think Trump has always been careful to not be in the room when the crime is being committed,’ Moore said. ‘I think he’s very canny.’

Moore continued: ‘If something’s going to happen in a room with Russians or others that could find him indicted, I think more than likely—because remember he doesn’t drink, he doesn’t do drugs, he is of his own faculties—he made sure that he was not in the room.’