The man who was convicted of murdering his wife in an ongoing legal wrangle that inspired the HBO drama The Staircase has denied that an earlier documentary showed him in a favourable light thanks to his relationship with its editor.

Michael Peterson, 78, was convicted of murdering his wife Kathleen in 2003, two years after he found her bleeding and unresponsive at the bottom of the staircase in their North Carolina home on December 9, 2001.

After more than 10 years of legal battles, the conviction was later overturned, after it emerged a forensic witness had given misleading testimony. Rather than opting for another trial, Peterson accepted an Alford Plea in 2017, admitted to the lesser charge of manslaughter in exchange for time served.

Although he maintains his innocence, suspicions remain over his involvement in Kathleen’s death.

Peterson was the subject of a 2018, 13-part Netflix documentary, also called The Staircase, filmed across 16 years. However, it emerged in 2018 that he had engaged in a 15-year relationship with one of the series’ editors, Sophie Burnett.

But speaking on This Morning today, Peterson said the documentary, which provided footage that helped to overturn his murder conviction, was not influenced by his relationship with Sophie.

Michael Peterson, who accepted an Alford Plea for the manslaughter of his wife Kathleen, is the focus of a new HBO drama The Staircase. He appeared on This Morning today (pictured) to discuss the new programme 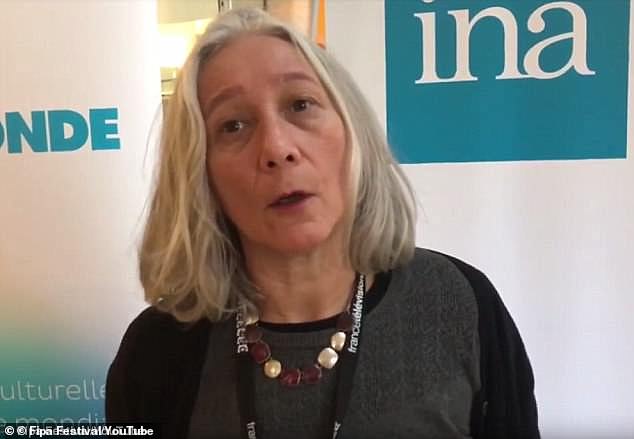 While filming a 13-part Netflix documentary about the long legal battle, Michael met and started a relationship with one of its editors, Sophie Brunet (pictured) 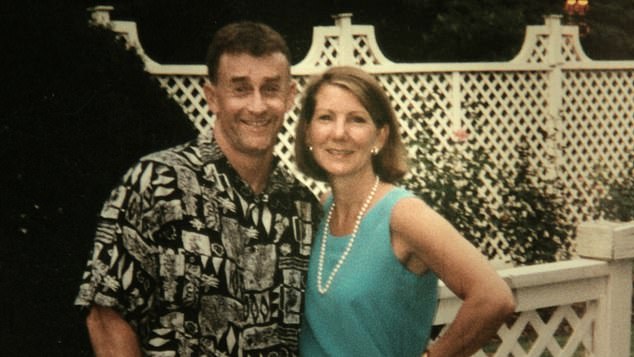 Michael was found guilty of murdering his wife Kathleen in 2003. The conviction was later overturned, following a forensics scandal

This Morning host Phil Schofield said: ‘Some would say that if you are dating the editor of the documentary that there’s a fair chance that she’s going to go easy on you, especially if she thinks you might be innocent.’

Peterson replied: ‘I did not know [Sophie] until 2004, long after I’d been going through all the trial that had been convicted and was in prison, so to suggest that she had done something many years earlier to twist the truth.’

Host Holly Willoughby suggested: ‘She may have been falling for you while watching that?’

He replied: ‘Well that I wouldn’t know. That I don’t know… I would ask her “Why? Oh my God, you’re married. You have a wonderful career. You have a child. Why are you coming to see me?”.

‘And part of it was [her saying] “I knew you were innocent from all of that”.’

He went on: ‘But to suggest that she had skewered the documentary to make it look that way, no, she didn’t do that.

‘And besides that, Jean [-Xavier de Lestrade], who was the director never would have allowed that. That’s questioning both of their integrities.’

The relationship, which lasted for 15 years, only ended around 2017.

During the interview, Peterson also discussed the current HBO series, discussing why he and his children do not watch it.

He said: ‘No one in my family has watched it. To me, it’s a very simple matter. I was in the Marines and it was a war for a year. I came back I did not want to see war movies…I was in prison for eight years, when I got out, I didn’t want to see a prison movie. I’ve lived it. I’ve seen it.’ 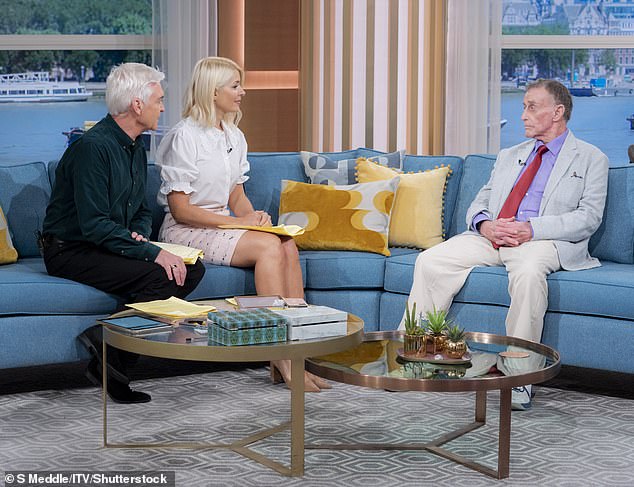 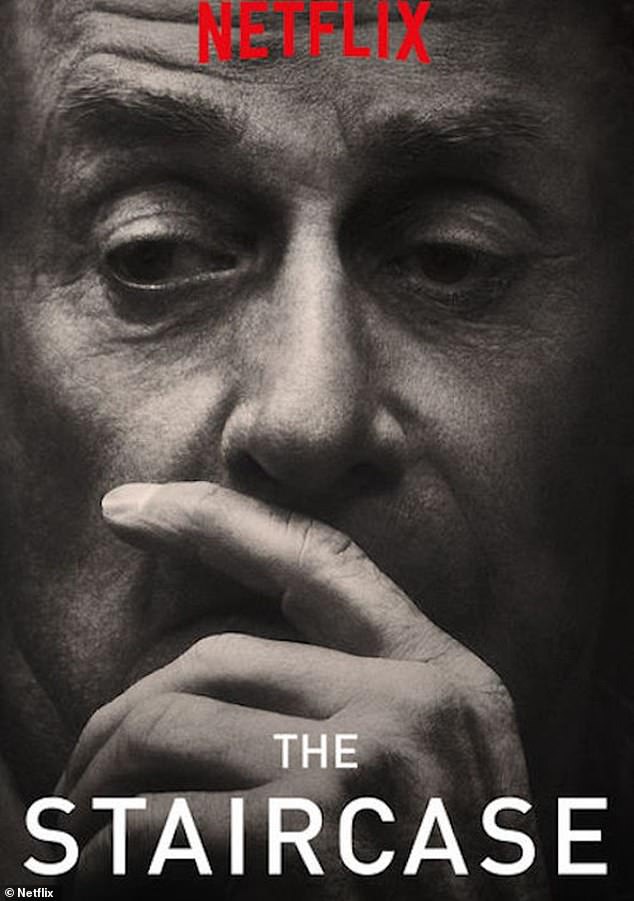 Michael Peterson was the subject of a 2018 Netflix documentary called The Staircase, which had 13 episodes and was filmed over 16 years.  Sophie Brunet edited some of the episodes 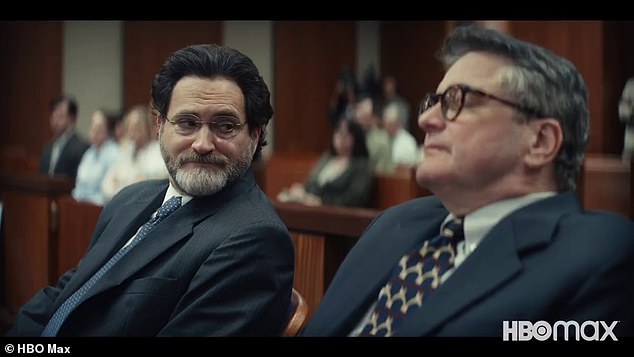 Continuing, he said: ‘And with Kathleen, she died. I was there when she died. I do not want to watch a fictionalised account, seeing her die three times. And I know my children won’t even touch that.’

Peterson also touched on one of the more controversial theories around Kathleen’s death – that it was caused by an owl.

While he does not believe the theory himself, saying he thinks her death was due to falling, he told the programme that there is some evidence to support it.

He said: ‘My attorney right now believes that absolutely she was savaged by an owl at the top of the stairs.’

Peterson noted that there were lacerations on Kathleen’s head, which could be consistent with an owl’s talons, and added that lawyer David Rudolf, who represented him in 2003, believed an owl could have been responsible. 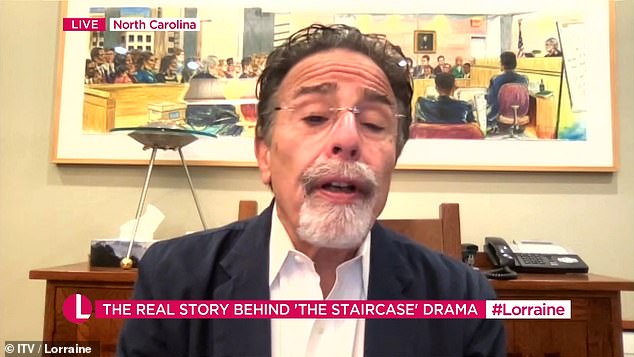 Attorney David Rudolf, who defended Michael Peterson in 2003, appeared on Lorraine earlier this week, describing the owl theory as ‘plausible’

The lawyer appeared on Lorraine earlier this week, to speak about the theory, which he said was supported by ‘plausible’ evidence.

This includes a feather found near Kathleen’s body, and a wooden sliver had been found in Kathleen’s left hand in a clump of hair that looked like it had been pulled out by the roots.

A later examination of the hair in 2008 yielded two more microscopic owl feathers.

While it became known to the public in 2009, Rudolf said the theory of the owl attack was brought up to him in 2003, at the time of Peterson’s first trial.

Speaking via video link, David Rudolf, told the programme: ‘I dismissed it when it first came up in late late 2003 just before I was giving my closing arguments.

‘It was dismissed pretty extensively at that time but then over the years, there were more and more owl attacks on humans.

‘I can’t say that the owl did it, but I can say it’s a plausible theory.’