Metal barriers and traffic wardens have been brought in to manage crowds around the new Bansky artwork that was painted on a Welsh garage.

The graffiti mural appeared overnight on a garage wall in Port Talbot, South Wales, and has since been under 24 hour guard from local volunteers.

More than 4,000 people are expected to descend on the suburban town which lies just off the M4 to catch a glimpse of the artwork.

And Hollywood star Michael Sheen has paid thousands of pounds to help protect the latest Banksy mural – which was painted in the actor’s hometown. 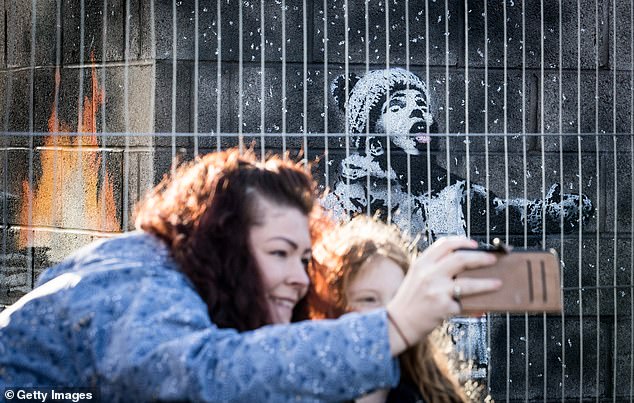 More than 4,000 people are expected to descend on the suburban town just off the M4 to catch a glimpse of the artwork. 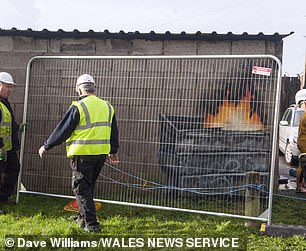 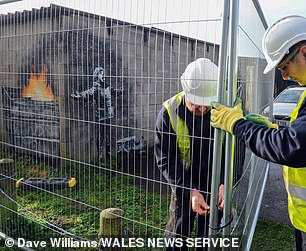 Sheen, 49, has said he will help foot the bill for security, legal bills and other costs to protect the work

Sheen, 49, has said he will help cover the costs for security and legal bills to protect the work.

A spokesman for the actor wanted to ensure the financial burden did not fall on garage owner Ian Lewis.

Artwork by Banksy has previously sold for £1million, including the Girl with the Red Balloon that was dramatically shredded at auction.

And the Mr Lewis could be the owner of a piece of artwork potentially worth millions of pounds.

Steelworker Mr Lewis, 55, said he only got three hours sleep when he found out the graffiti had appeared on his garage.

He said: ‘I am very pleased, I think it is a smashing bit of artwork. It is good for the town and I just want to protect it, and it is here for everybody.’

The painting appeared on two walls of a garage in the Taibach area and shows a child playing in the falling ash and smoke from a fire in a skip.

Banksy posted a video on Instagram this afternoon of the work alongside the caption ‘Season’s greetings’.

At the end of the footage, which is soundtracked by Christmas music, the video pans up to show the industrial landscape of Port Talbot steelworks, which is thought to have inspired the painting. 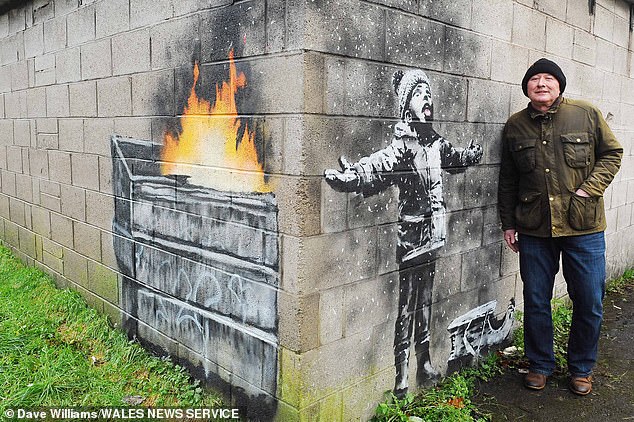 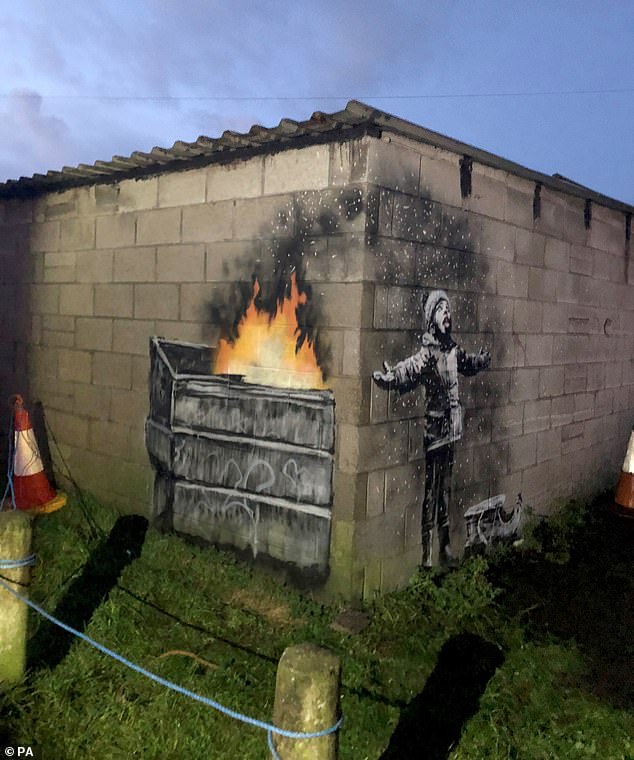 Traffic wardens were brought to manage the crowds on the suburban alley after there was a sudden increase in vehicles parking and filling the street.

But a spokesman for the local council said they wanted to make sure Mr Lewis’ neighbours were not disturbed.

A spokesman said: ‘We understand the excitement but we want to remind visitors this is a residential area and would ask that people coming to photograph or view the Banksy do their best not disturb those living nearby.’

Rachel Honey-Jones, 33, who lives in The Mumbles on the other side of Swansea Bay, said: ‘It’s amazing, an incredible addition to Port Talbot.

‘Everything about it is political messaging, the way the boy has been drawn, the positioning near the steelworks, the fact it was done just after the (Severn Bridge) tolls went down.’

Black dust from the town’s steelworks covered houses, cars and pets in the area in July, a possible inspiration for the artwork.

Ms Honey-Jones warned that the artwork should be protected by the council.

She said an artist friend was tipped off to the location overnight and stayed to keep guard.

She added: ‘People have already taken sledgehammers to it and tried to throw paint on it. It will bring visitors and trade and tourism to the county so it really does need to be protected.’ 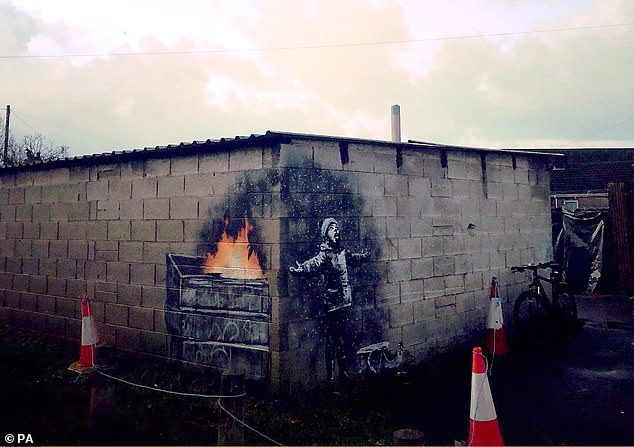 The world-famous street artist visited Port Talbot in Wales, leaving a new artwork that appears to comment on the nearby steelworks plant

Ian Lewis, 55, was stunned when he realised his blockwork garage wall had the new artwork.

The Tata steel worker said: ‘I’m a bit overwhelmed at the moment to be honest.

‘Fans of Banksy have been here and people have come along to see it.’

Banksy’s works have fetched millions, and his iconic Girl and Balloon famously sold for £860,000 earlier this year despite being shredded.

The artwork appears months after Port Talbot was mistakenly dubbed the most polluted town in the UK.

In May the World Heath Organisation had to apologise after it admitted its figures were wrong.

The global body said Port Talbot’s air pollution was measured at 9.6853 micrograms, just under half of the figure it had originally given the town, and below WHO national guideline of 10 micrograms. 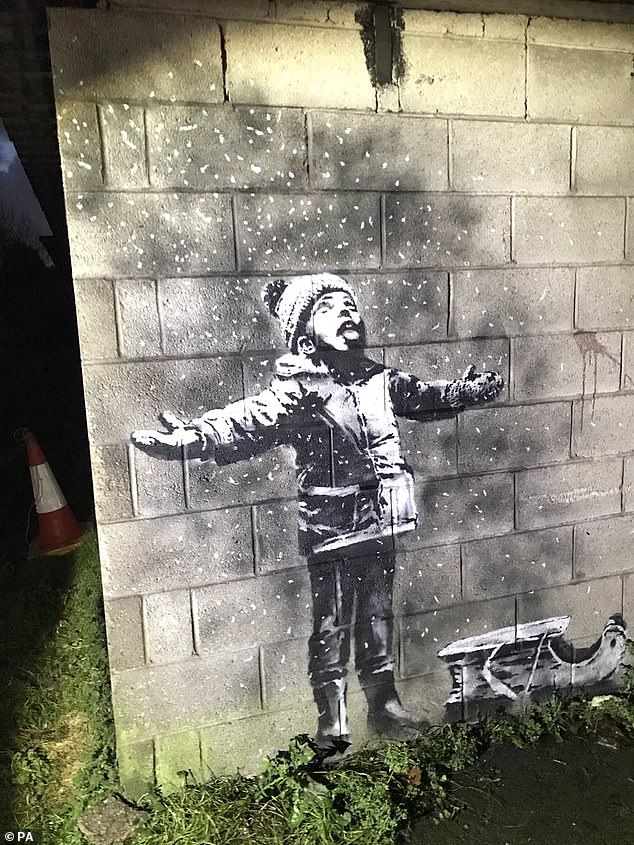 Resident Pete Humphries said: ‘I reckon that because the tolls have been scrapped on the Severn Bridge that Banksy has come over from Bristol into Wales.

‘It is a fantastic image.’

Local councillor Nigel Thomas Hunt said: ‘The placing of the work is very clever, in between the blast furnace and the M4, yards from where Richard Burton was brought up and where we’ve had bonfires for years.

‘You can look at the painting and see the furnaces in the background. We’re delighted. I’ve written to the council already and we need to secure this really quickly.’

A spokesman for Neath Port Talbot Council said: ‘The Council is sending officers to liaise with the property holder to assist in protecting this artwork.’