We two are onesie: The couple joking in a rainproof overcoat

She was the raven-haired, green-eyed, feline temptress who won the most coveted female role in cinema history as the wilful Southern minx, Scarlett O’Hara, in the most celebrated film ever made, Gone With The Wind.

He was the impossibly handsome, dark, and brooding Heathcliff in Wuthering Heights, acclaimed as the greatest actor of the 20th century, and the youngest ever to be knighted.

The volcanic passion that drove Vivien Leigh and Laurence Olivier to destroy both their first marriages and to abandon their children, prior to their gilded 20-year reign as the King and Queen of stage and screen, is an iconic love story.

In their heyday, the Oliviers were as famous globally as Elizabeth Taylor and Richard Burton later became, and as George and Amal Clooney are now.

But in the words of one of their close friends, theirs was ‘a marriage made in hell’, a love that turned to hatred, overshadowed by violence, promiscuity, cruelty, jealousy and madness.

Next month, Larry and Vivien’s astonishing life together is to be resurrected when Sotheby’s auction more than 300 of Leigh’s artefacts and her extensive library.

The sale, which follows the death in 2015 of Vivien’s only child, Suzanne Farrington, is a landmark theatrical and cinematic event. And at the centre of it all is the romance that, decades on, still has the power to captivate.

Home movies included in the sale show Larry and Viv, scantily dressed, racing delightedly into each other’s arms beside the swimming pool at Notley Abbey, their Buckinghamshire estate, where I visited them on occasion.

Her treasured jewellery includes an ‘Eternally’ ring, inscribed on the inside, ‘Laurence Olivier Vivien Eternally’, and a wrist watch engraved on the back, ‘Vivien Larry Only! Darling Xmas 1940’. 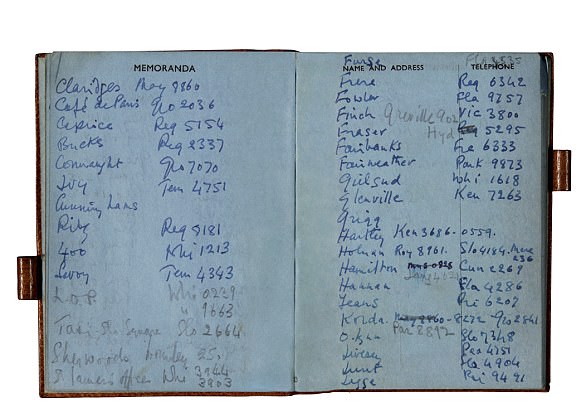 Only the best connections: Vivien’s 1953 appointments book had the choicest venues in London.

Still around are: Claridge’s, the Cafe de Paris, The Connaught, Le Caprice, The Ritz, The Ivy and The Savoy.

The ‘Finch’ on the list is probably actor Peter, whom she announced as her lover when her marriage to Olivier was breaking up.

Among numerous photographs of Olivier that Vivien kept after their divorce, there is one in which his inscription spells out the word, LOVE: ‘From L tO his V for Ever’.

And there are Vivien’s personal and engagement diaries, in one of which she wrote ‘Told Leigh [Holman]’, an admission to her first husband of her adultery with Olivier. Six days later she made another entry: ‘Left with Larry.’

Vivien Leigh was born the daughter of a British Cavalry officer and strict Catholic mother in Darjeeling in 1913. She married barrister Leigh Holman, 13 years her senior, in 1932 and their daughter was born a year later.

Marriage and motherhood did not deter Leigh’s ambitions for a stage career, and at 22 she enjoyed her first West End success playing a prostitute. That same year, she first set eyes on Olivier on stage. 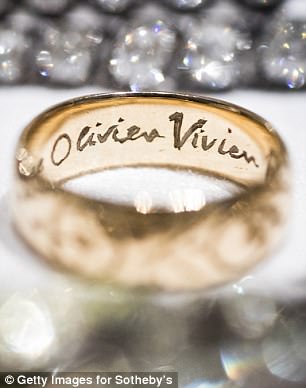 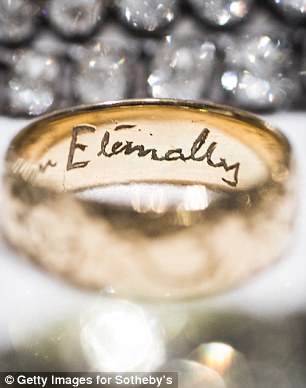 She was fond of Holman, but he’d begun to bore her.

‘That’s the man I’m going to marry,’ she confided to a girlfriend, who pointed out she and Olivier were both married. ‘It doesn’t matter,’ Vivien replied. ‘I’ll still marry him one day.’

And when they did eventually meet, the attraction was mutual and instantaneous.

For Olivier, however, it was more complicated.

In 1930, he had married the actress Jill Esmond and she was expecting their first child. But by the time his wife was six months’ pregnant, Olivier had succumbed to Vivien’s relentless campaign of seduction. 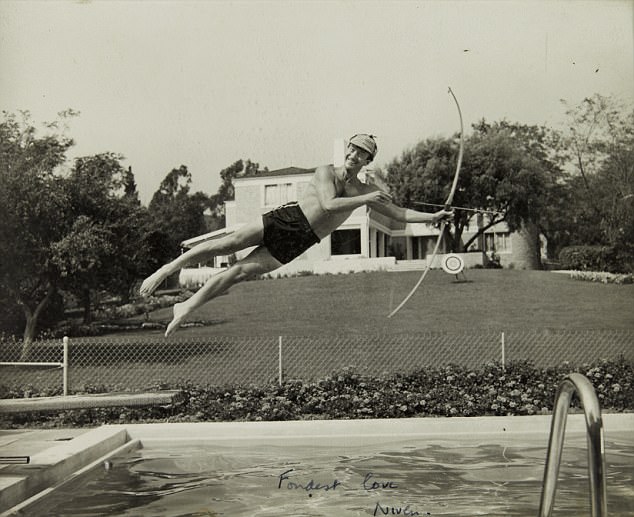 Bowman showman: David Niven gave this picture of himself to Vivien

When Olivier and Jill went on holiday to Capri, Vivien showed up there as well. She also arrived, uninvited, at the christening of the Oliviers’ son, Tarquin.

Olivier would later confess to being ‘a really worm-like adulterer, slipping in between another man’s sheets’, but the actress Phyllis Konstam, who knew them both, told me: ‘No one could have been more wicked than Vivien was. She deliberately set out to destroy that marriage.

‘I know for a fact that she even made lesbian overtures to Jill [who was bisexual], knowing her proclivities, in order to infiltrate her way into their lives. It was as if she had the Devil behind those beautiful green eyes.’

After Vivien had left Holman and their toddler daughter, and Olivier had left Jill and their baby son, the lovers lived together while their divorces were finalised and played opposite each other in the film Fire Over England, where their torrid affair was the talk of the set. 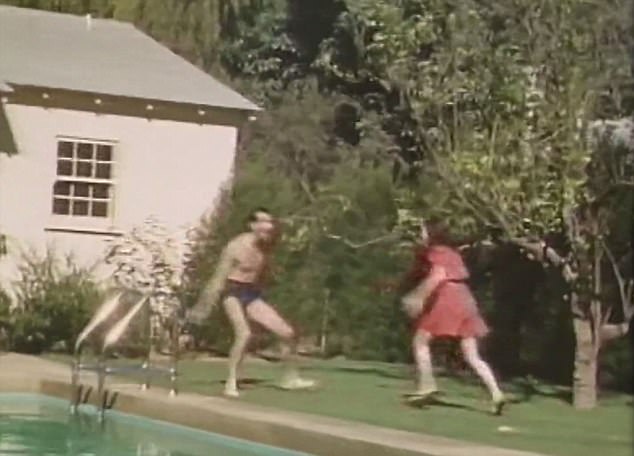 ‘I’m done in already,’ Olivier complained to a friend. ‘But it’s not the stunts [in the film]. It’s Vivien. It’s every day, two, three times. She’s bloody wearing me out.’ Vivien’s voracious sexual appetite was part of the illness that would come to dominate their relationship. She suffered from manic depression, or bipolar disorder, as it is now known.

It was during their appearance in Hamlet, in 1938 at the Old Vic, that Olivier first realised there were problems. Backstage for no apparent reason, Vivien veered from silence at one moment to hysterical yelling the next. She had ‘gone bonkers, having attacked [Olivier], having had a fit of some kind’.

She went ahead with her performance, the audience unaware of what had happened, and later had no memory of the event.

After winning the Best Actress Oscar for the role of Scarlett O’Hara — Vivien’s character was so similar to that of the scheming, selfish Scarlett that it seemed almost like type-casting — she and Olivier married in 1940, in a quiet ceremony with Katharine Hepburn as one of the witnesses. 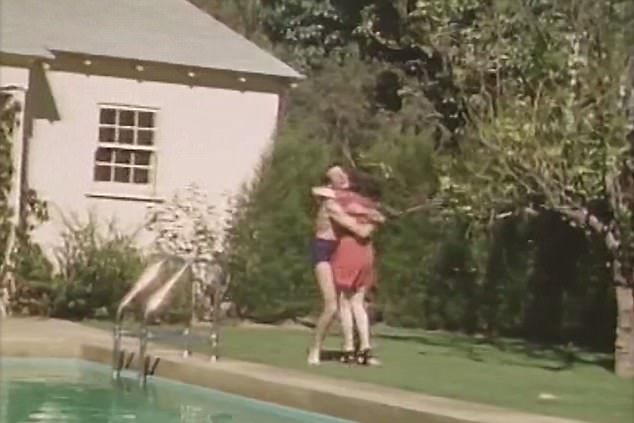 Back in London, Vivien performed in a skit for a charity gala, singing a song with the words ‘I’m Scarlett O’Hara, the terror of Tara’.

By this point, terror is what Vivien’s manic depression was creating in her distraught husband and her friends and family. Eventually, she was persuaded to undergo electro-convulsive therapy to try to reduce the symptoms.

She did not help herself by starting to drink heavily. In 1944, while pregnant during the filming of Caesar and Cleopatra, she fell and suffered a miscarriage which triggered another bout of depression. A year later, tuberculosis was diagnosed. Despite the trauma of his personal life, Olivier was prospering on his way to supreme theatrical greatness, with superlative stage performances in Richard III, King Lear and Oedipus Rex.

In 1947, aged 40, he was knighted. Vivien, now Lady Olivier, was desperate not to be left behind, and so accepted the stage role of Blanche duBois in Tennessee Williams’s A Streetcar Named Desire, playing a fading Southern beauty with a past characterised by notorious sexual promiscuity, alcoholism and eventual mental collapse. For the rest of her life, she would believe playing Blanche ‘tipped me over into madness’. 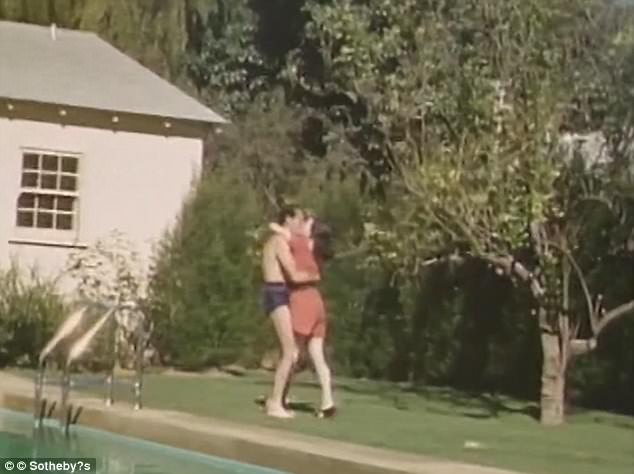 The passion: Olivier and his lover in red share a kiss

It did not, however, stop her reprising the role on screen in 1951 and she won a second Oscar. She also had a sexual dalliance with her co-star, Marlon Brando — as did Olivier.

David Niven later wrote that he discovered ‘Brando and Larry swimming naked in the pool. Larry was kissing Brando…’

For both Olivier and Leigh, bisexuality was a recurring theme and they regularly cheated on each other with partners of both sexes. One biographer claimed that Vivien used male prostitutes, picked up at Scotty’s Garage in Los Angeles, an undercover brothel which had one petrol pump and 22 male attendants.

It was after Olivier’s long, flamboyant affair with Danny Kaye that Vivien informed her husband coldly ‘I don’t love you any more’. 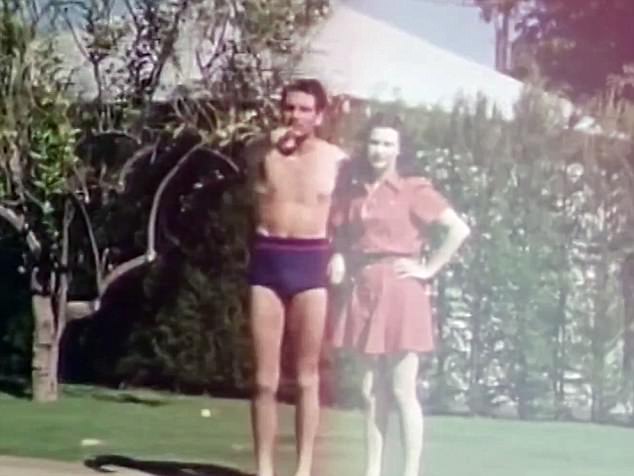 Pointing the finger: Were they angry about being filmed?

By 1953, the marriage was effectively over and Leigh announced she was in love with Peter Finch, a young Australian actor her husband had discovered and mentored, and her co-star in the film, Elephant Walk.

It was during filming in Ceylon that Vivien experienced her worst manic episode of all, wildly and randomely reciting Blanche duBois’ dialogue from Streetcar and having to be held down and sedated before being dragged kicking and screaming onto a plane home to London. She was replaced by Elizabeth Taylor.

She recovered sufficiently to play opposite Olivier in Terence Rattigan’s The Sleeping Prince. But when the play was filmed in 1956, Marilyn Monroe, 13 years her junior, was brought in to co-star with Larry in the role that Vivien, at 43, was now considered too old to play.

A month after Monroe arrived on set, Vivien suffered a second miscarriage, losing her last chance of having a child by Olivier. 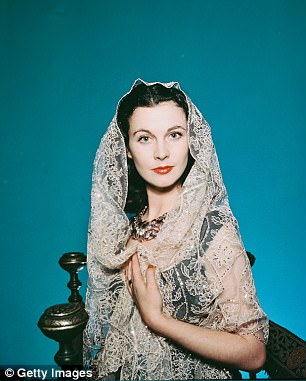 Vivien Leigh was born the daughter of a British Cavalry officer and strict Catholic mother in Darjeeling in 1913. She married barrister Leigh Holman, 13 years her senior, in 1932 and their daughter was born a year later

It was during this period that, according to her close friend Joan Thring, Leigh became ‘fiendish about sex’ and began to seek out sexual encounters with strangers. She propositioned taxi drivers and delivery men.

Once, after it had been raining, she came home ‘bedraggled, covered in mud and looked terrible. She had been in the Square [behind her London home] with someone. That sort of thing happened all the time’.

For Olivier, Vivien ‘was now more of a stranger to me than I could ever have imagined possible’.

In July 1957, after Vivien discovered Larry was having an affair with the 27-year-old actress Dorothy Tutin, there was violence between them, leading to a gash above Vivien’s left eye, and Olivier ‘realised with horror that each of us was quite capable of murdering or causing death to the other’.

Vivien’s attitude towards her successor as Lady Olivier was vindictive for the remainder of her life. ‘Joan Plowright wouldn’t be too bad,’ she wrote cruelly, ‘if only she didn’t smell so.’

Her own mental and physical health continued to deteriorate even while her talent remained. At the age of 50 in 1963 she won a Tony award for a Broadway musical — but during one performance, she had run amok on stage.

Her French co-star, Jean-Pierre Aumont, said: ‘She began to claw me, slap me in the face and kick me in the balls. [She] looked at me, then through me at the entire world, with hatred . . . and she walked off’.

When Aumont returned to his dressing-room, he found that Vivien had destroyed pictures of his wife and family, and doctors were trying to sedate her with morphine.

For the last nine years of her life, Vivien lived with a handsome, younger actor, John (Jack) Merivale and he found her dead on the floor of their flat in Belgravia in July 1967. She was 53.

Olivier was being treated for prostate cancer, but on receiving the news of her death he left hospital and went to the flat. ‘I stood and prayed for forgiveness for all the evils that had sprung up between us,’ he wrote. ‘It has always been impossible for me not to believe that I was somehow the cause of Vivien’s disturbances.’

For her part, she had once told an interviewer that ‘I would rather have lived a short life with Larry than a long one without him’.

In 1986, three years before his own death at the age of 82, the Right Honourable Baron Olivier of Brighton, as he had now become, was discovered by a visitor to his Sussex home weeping over a Vivien Leigh movie on TV.