The gunman who killed his best friend and his girlfriend – and injured a third – in a shooting at an apartment complex in Colorado has been identified.

While a motive for the 2am shooting in Fort Collins hasn’t been identified, police have called it an ‘ambush’ as the three victims and the gunman were socializing before the killing.

McNealy and Kemp were both shot multiple times while Zamora died after a single gunshot wound to the head.

Michael Zamora, 30 (left), has been identified as the gunman who shot and killed his girlfriend – Colorado State University student Savannah McNealy, 22 (right) – and best friend Tristan Kemp, 26, before turning the gun on himself. He also injured a third woman 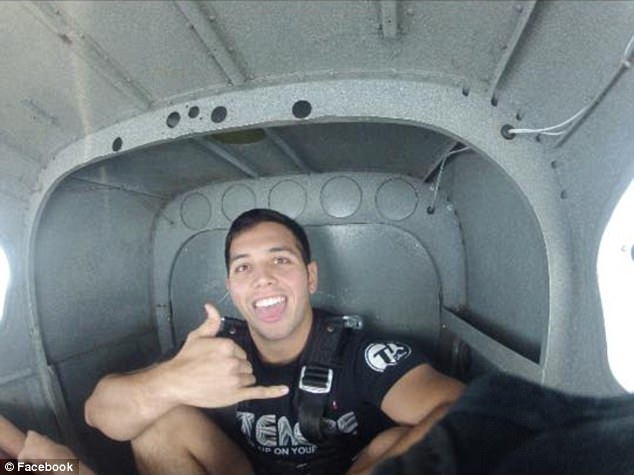 While a motive for the 2am shooting in Fort Collins hasn’t been identified, police have called it an ‘ambush’ as the three victims and the gunman were socializing before the killing (Pictured, victim Tristan Kemp) 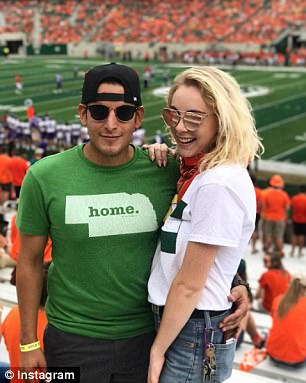 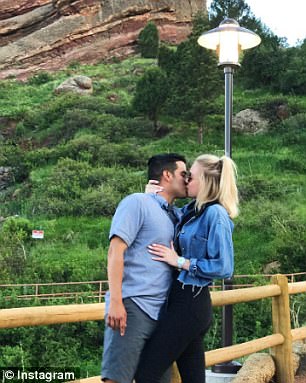 McNealy and Zamora (left and right) were in a relationship since at least May of this year. Zamora was a resident of Fort Collins, but was a staff sergeant based at FE Warren Air Force Base in Wyoming 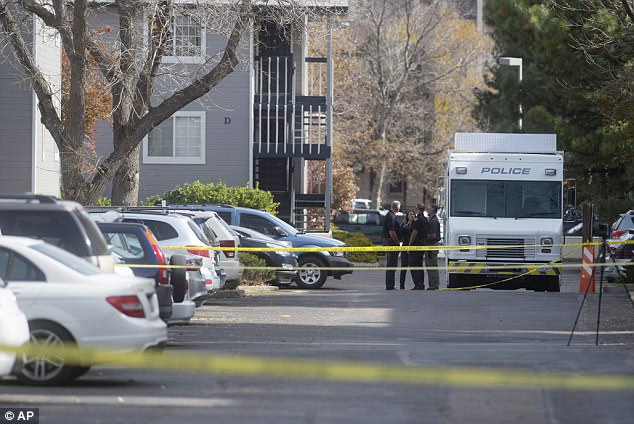 Fort Collins Police Chief Terry Jones said the three victims had been dropped off by a Lyft at the apartment complex before the shooting. Zamora was not with them

Fort Collins Police Chief Terry Jones told The Denver Post that the three victims had been dropped off by a Lyft at the apartment complex before the shooting.

Zamora had been out with the victims but did not ride home with them. The shooting started just after they got home.

McNealy – who had just turned 22 the night of the shooting – was wrapping up a night of birthday celebrations.

The third victim, a woman, was taken to Medical Center of the Rockies for treatment and is expected to survive.

Police recovered two rifles and a handgun registered to Zamora at the scene. 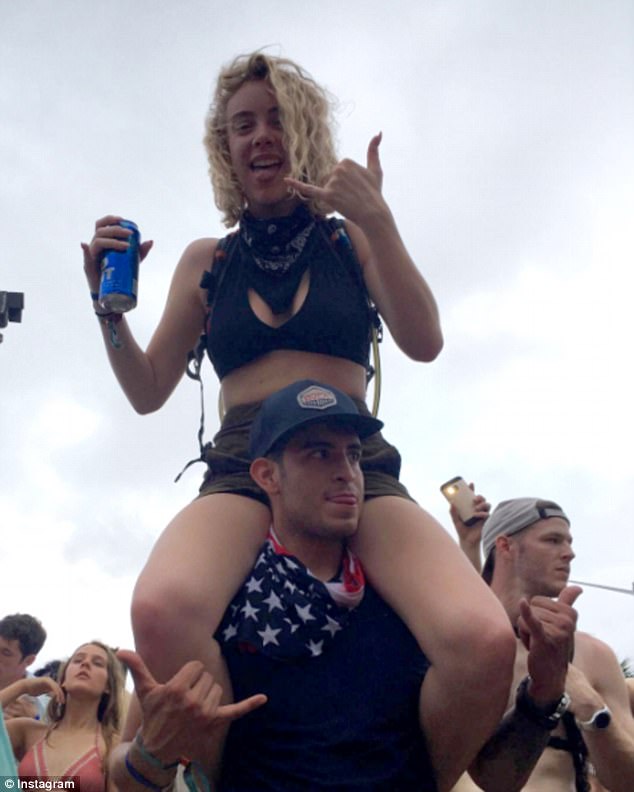 According to Tristan Kemp’s uncle, Thomas Perez, the men had traveled to Colorado so that Zamora could visit his girlfriend (pictured together) 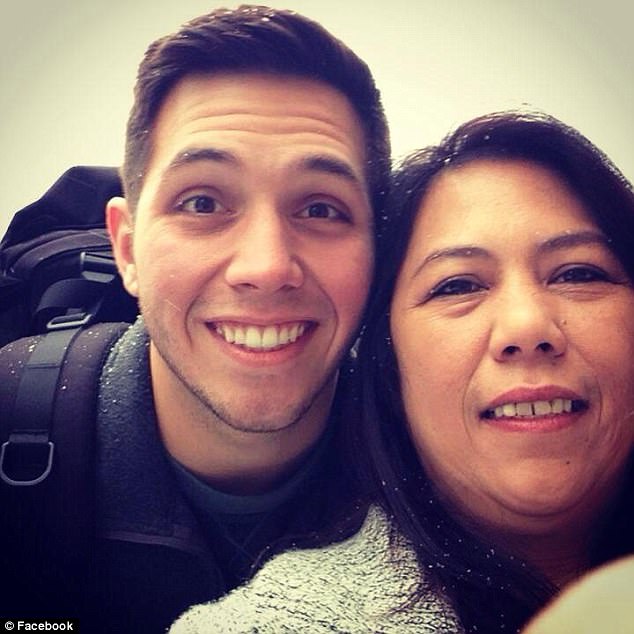 Perez also said that Zamora served in the Air Force in Afghanistan with Kemp (pictured, with his mother). He added that the two also worked together at the same company in California 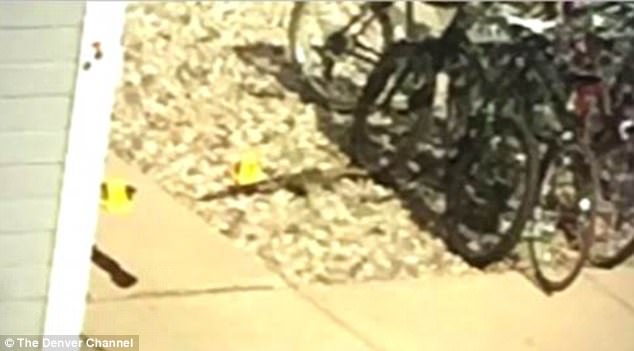 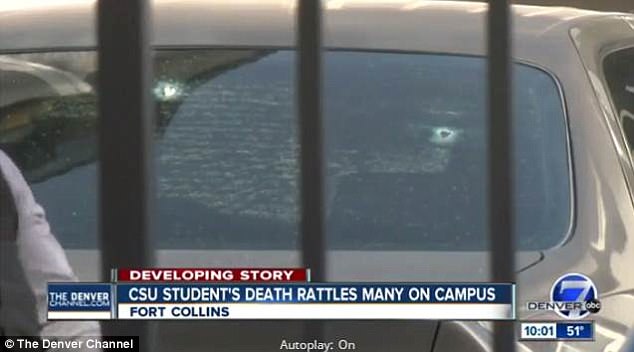 McNealy and Zamora were in a relationship since at least May of this year. A love triangle between the two victims and Zamora has not been ruled out yet as a motive.

Zamora was a resident of Fort Collins, but was a staff sergeant based at FE Warren Air Force Base in Wyoming, reported ABC Denver.

Tristan Kemp’s uncle, Thomas Perez, told Fox Denver that Zamora served in the Air Force in Afghanistan with Kemp. He added that the two also worked together at the same company in California.

According to Perez, Kemp was currently living in Hawaii but the men had traveled to Colorado so that Zamora could visit his girlfriend.

‘I can say this much about my nephew, he was an American hero. He proudly served the United States and the people. When he got out of the Air Force, he continued to serve as a civilian,’ he said. 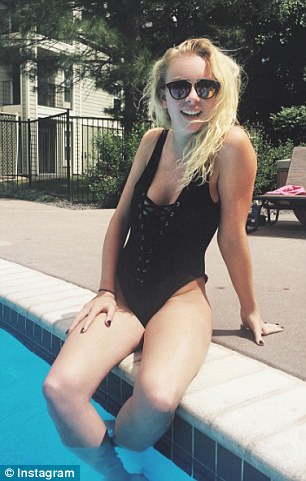 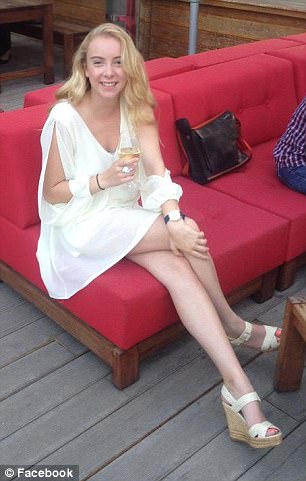 McNealy was studying liberal arts, art and art history and planned to graduate in December. She also was a designer for CSU Life, a monthly campus publication

McNealy was studying liberal arts, art and art history. She also was a designer for CSU Life, a monthly campus publication.

The other three involved, whose names have not been released, were not affiliated with CSU, a public university with more than 33,000 students about 65 miles (105 kilometers) north of Denver. City police Sgt. Dean Cunningham said it appeared that the shooter was known by one of the victims. 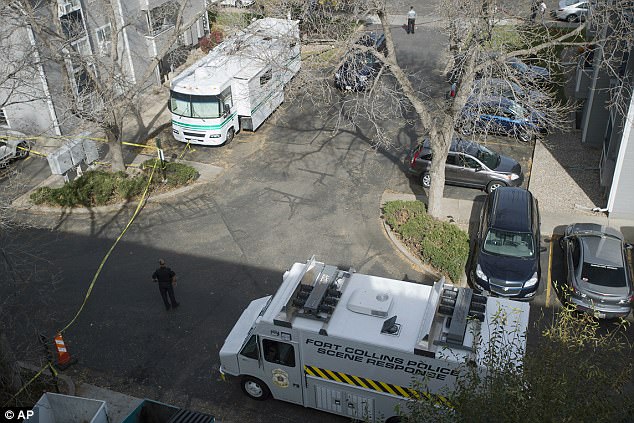 The cause of the shooting is still under investigation. Residents in the apartment complex say they were woken up by the sound of gunshots and then a woman screaming for help 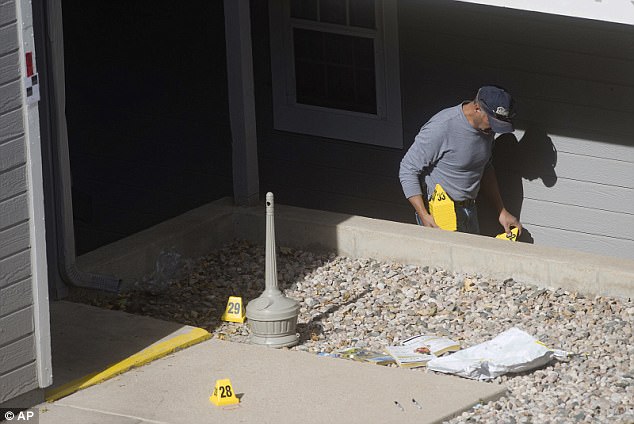 Yellow police tape cordoned off a parking area outside a drab gray apartment building in the City Park neighborhood, a residential area that abuts the university’s 590-acre campus. Many students and faculty live in the neighborhood.

Blood pools were seen on one sidewalk in the apartment complex. Investigators seemed to be focusing their efforts on the area of the blood pools and a vehicle in the parking lot.

Darren Rutz, a former CSU student who lives near the scene, told The Rocky Mountain Collegian he was awakened by a woman’s call for help, followed by gunfire.

‘It seemed like quite a few gunshots to me,’ Rutz said. 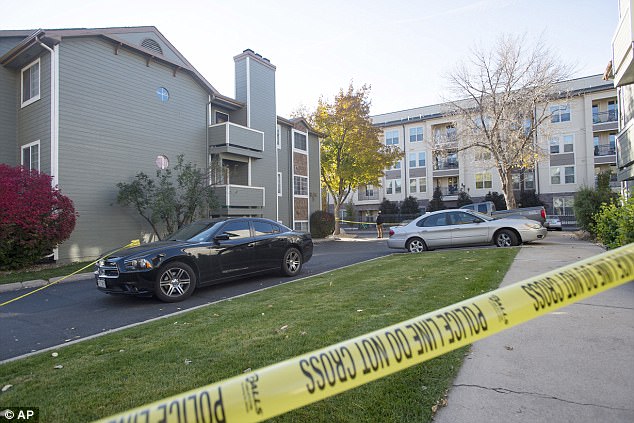 After the gunshots were heard, CSU officials sent out a text message to students, warning them to stay inside 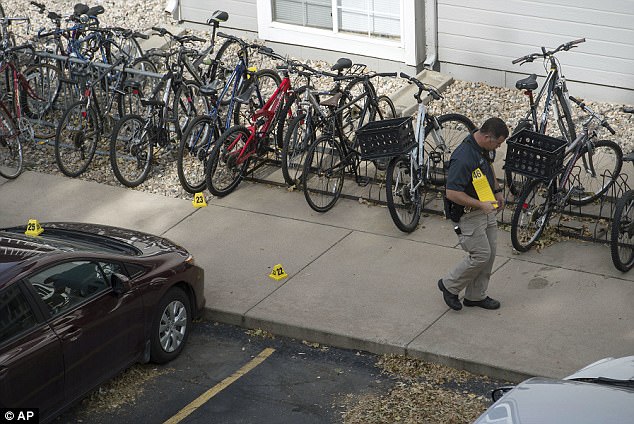 Another resident, Matthew Litton, told the Reporter-Herald that he was lying in bed when he heard multiple gunshots.

‘I could tell from the consistency of the firing that it wasn’t fireworks, it was gunshots. I heard a girl yelling, ‘Call 911!’ After that, I heard one last bang, and then it was quiet,’ he said.

Litton said he also saw a photo taken by a friend, showing two bodies lying on the sidewalk with a pistol between them.

Grief counselors tended to students and others at an on-campus student center.

‘We are deeply saddened by this terrible loss to our campus community and will share more information as we have it,’ the university said in an email to students and staff.

Anyone with information about the shooting is being asked to call Detective Tessa Jakobsson at 970-221-6575.

It is with a very heavy heart that I write to inform you that Savannah McNealy, a CSU senior, was killed last night in the shooting that occurred on City Park Avenue. Savannah majored in Art and would have graduated this December. A member of the student media staff and an intern on CSU’s Creative Services Team, she was well-loved and respected by those who knew her. I didn’t have the pleasure of knowing Savannah personally, but I have talked this afternoon with others who did… and she sounds like an exceptional, bright, energetic, confident, and creative young woman. She was clearly loved as a friend and daughter.

Friends and colleagues have organized a vigil in her honor at 4 p.m. tomorrow near the Ram Walk on Meridian Drive between Hughes Way and Pitkin Street. Savannah was instrumental in coming up with the idea and design for the Ram Walk, the orange stripe that has already become such an important CSU tradition.

The circumstances around her death do not, indeed, cannot define Savannah’s life. Her life’s definition is etched on all those who knew and cared for her via the impact she had on them. She left her stamp on CSU as well, and we will treasure her memory.

Our thoughts go out, as well, to the other victims of last night’s shooting, whose names have not yet been made public. This tragedy, occurring so near our campus, brings into sharp focus the value of life everywhere. As we head into the coming weekend, please take care of yourselves and one another.

Take advantage of the counseling and support resources we’ve been sharing; that’s what they’re there for and our counselors are simply wonderful. They are available for walk-in meetings in the Cherokee Park Room of Lory Student Center 8 a.m.-3:30 p.m. tomorrow, Oct. 20. You may also reach an on-call counselor during business hours at (970) 491-6053 and with an after-hours (evenings, night, weekends) counselor at (970) 491-7111.

Each of you is a unique light, with the badly needed potential to brighten our world’s dark places – both large and small. Shine some of that light on each other this evening in Savannah’s memory.