Michel Barnier said the Prime Minister’s  landmark address is a ‘step forward’ in the crucial talks.

But he repeated his warning time is running out and ‘sufficient progress’ must be made on the withdrawal deal before proper trade talks can start.

His cautious welcome to the speech came just a day after he had tried to turn the heat up on Mrs May over Brexit by demanding Britain ‘settle its accounts’ with the bloc.

In a statement this afternoon, he said: ‘In her speech in Florence, Prime Minister Theresa May has expressed a constructive spirit which is also the spirit of the European Union during this unique negotiation.

‘The speech shows a willingness to move forward, as time is of the essence.’ Mr Barnier added: ‘Prime Minister May’s statements are a step forward but they must now be translated into a precise negotiating position of the UK government.’

He singled out Mrs May’s promise no other EU state would have to pay more into the Brussels budget because of Brexit, and said: ‘We stand ready to discuss the concrete implications of this pledge.’

Michel Barnier, pictured in Brussels this month, has welcomes Theresa May’s Florence speech saying it displays a ‘constructive spirit’ and is a ‘step forward’

His praise comes just a day after he tried to pile the pressure on Mrs May by demanding a fresh Brexit plan by next week.

Speaking to the Italian Parliament yesterday, he warned that ‘time is of the essence’ and warned there is ‘only one year left’ to thrash out a deal which secures an agreement on withdrawal and a transition phase.

He said ‘major uncertainty’ remains over the key issues of the divorce bill citizens rights and the Irish border and blamed Britain failing to come up with a plan.

He also warned that Britain would not be able to enjoy all the benefits of being a member of the single market without paying into the EU budget.

And on the Brexit divorce bill, Mr Barnier said the UK must ‘settle the accounts’ before proper talks on a trade deal can start.

He said an agreement would be best for everyone, before adding: ‘But if we want a deal, time is of the essence.

‘The Treaty on European Union foresees a period of two years to negotiate withdrawal.

‘Six months have gone by since Theresa May’s letter on 29 March 2017. Six months will be necessary to allow for ratification before 29 March 2019.

‘There is therefore only one year left.’ 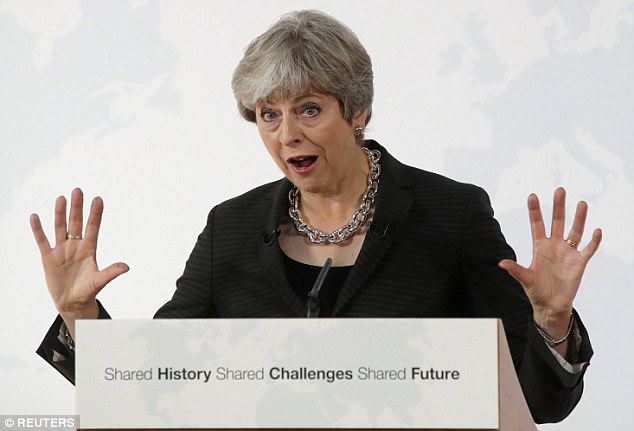 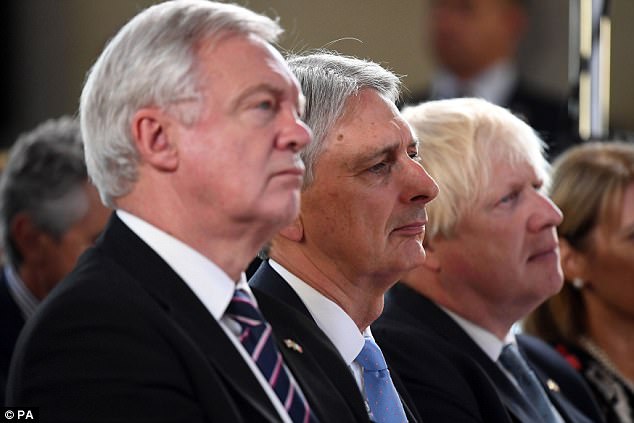 David Davis, Philip Hammond and Boris Johnson all travelled to Florence with the PM and sat in the front row to hear her speech in a show of cabinet unity on Brexit following a summer plagued by reports of rifts between the ministers

And he talked tough on trade – warning that the UK will not be able to have the benefits of single market membership without pouring cash into the coffers at Brussels.

Mr Barrier said: ‘Naturally, if the United Kingdom wanted to go further than the type of free trade agreement we have just signed with Canada, there are other models on the table.

For example, Norway and Iceland have chosen to be in the single market, to accept the rules, and to contribute financially to cohesion policy.

‘But one thing is sure: it is not – and will not – be possible for a third country to have the same benefits as the Norwegian model but the limited obligations of the Canadian model.

‘And naturally, any agreement must respect the regulatory autonomy of the EU, as well as the integrity of its legal order.’

He stressed the transition period will be ‘short’ and suggested the UK will have to abide by EU laws and European Court of Justice during it.

Mr Barnier said: ‘I would like to be very clear, if we are to extend for a limited period the acquis of the EU, with all its benefits, then logically this would require existing Union regulatory, budgetary, supervisory, judiciary and enforcement instruments and structures to apply.’