She has just finished quarantining after contracting coronavirus despite having the Pfizer vaccine.

And Michelle Heaton was thrilled to be back at work again after her self-isolation period came to an end as she shared a snap on an official job on Wednesday.

The singer, 41, told her fans she had reunited with her Liberty X bandmates Jessica Taylor and Kelli Young as she worked on a mystery work project.

Free at last! Michelle Heaton was thrilled to be back at work again after her coronavirus self-isolation period came to an end as she shared a snap on an official job on Wednesday

Exciting: The singer, 41, told her fans she had reunited with her Liberty X bandmates Jessica Taylor and Kelli Young as she worked on a mystery work project

Michelle shared a mirror selfie in a sultry black outfit as she got ready at Elstree Studios in London.

She captioned the snap: ‘Today was my 1st official job of 2021! I might look moody, but I took this picture at @elstreestudios in my dressing room after 22 mins of trying to look like I know how to pose..

‘I was reunited with my girls after over a year of not seeing them at all! @jessicalibertyx #kelli I belly laughed allot ..’ 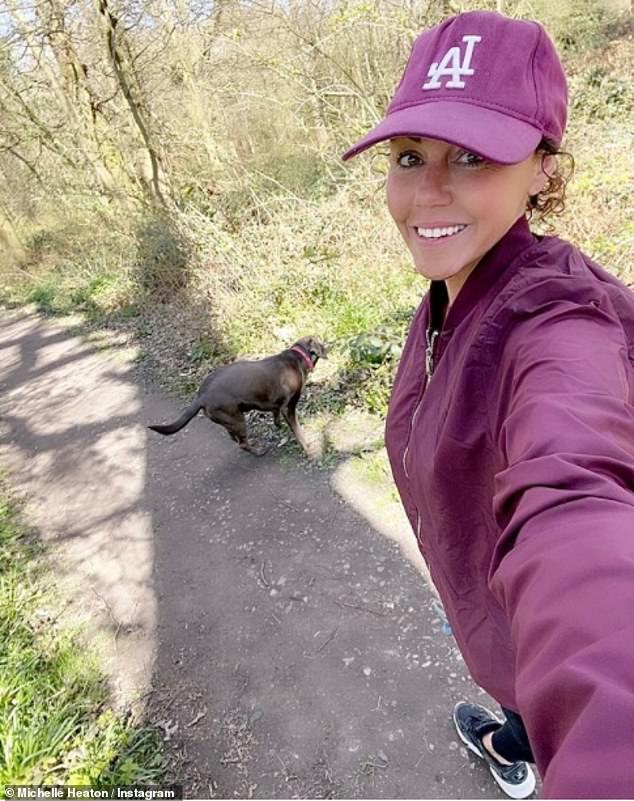 Coronavirus recovery: On Tuesday Michelle took to Instagram to share her joy with her followers that she was finally allowed out of self-isolation and had gone for a walk

On Tuesday Michelle took to Instagram to share her joy with her followers that she was finally allowed out of self-isolation.

The singer told her fans: ‘I can’t wait to be back doing SOMETHING other than being at home. Yay!’

Michelle looked happy and healthy in a maroon LA Dodgers cap and a matching bomber jacket as she strolled in the park with her dog Bella.

She told her followers: ‘And we’re officially out of the house! It’s mental coz we’ve prob done longer stints in lock down… but we at least went out for the walks.. 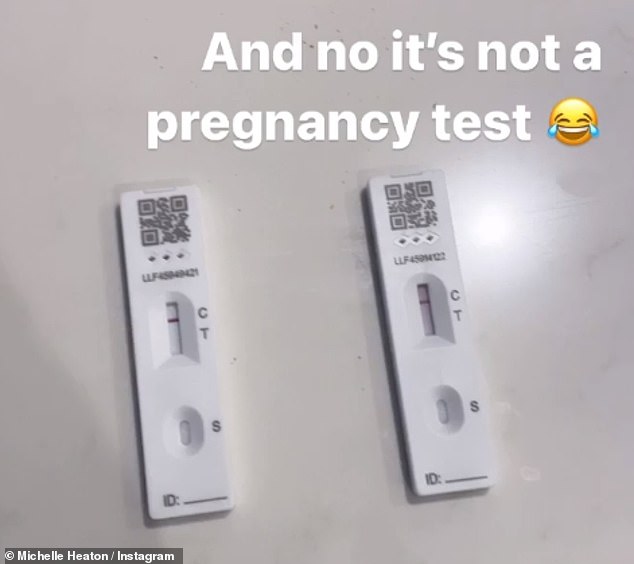 ‘We’re officially out of the house!’: Michelle shared a snap of her negative COVID test while she blasted out George Michael’s hit track Freedom in celebration

‘Poor Bella must have thought we were proper cruel for the last week and a half! Dogs life.’

The singer then shared a snap of her negative COVID test while she blasted out George Michael’s hit track Freedom in celebration.

Michelle caught coronavirus at the same time as her husband Hugh Hanley and their two children Faith, nine, and Aaron, seven, which meant the family’s beloved dog also suffered through their quarantine.

She told her followers from the park: ‘Self isolation is finished and this one – Bella Wella –  this is her first time out as well cause obviously we couldn’t walk her cause all of us had it at the same time.’

‘I’m so cold… could have actually left yesterday but I thought I’ll give it another day just in case, but all good!’

‘Today is my first day of work cause it’s a bit of a secret but I can’t wait to be back doing SOMETHING other than being at home. Yay!’ 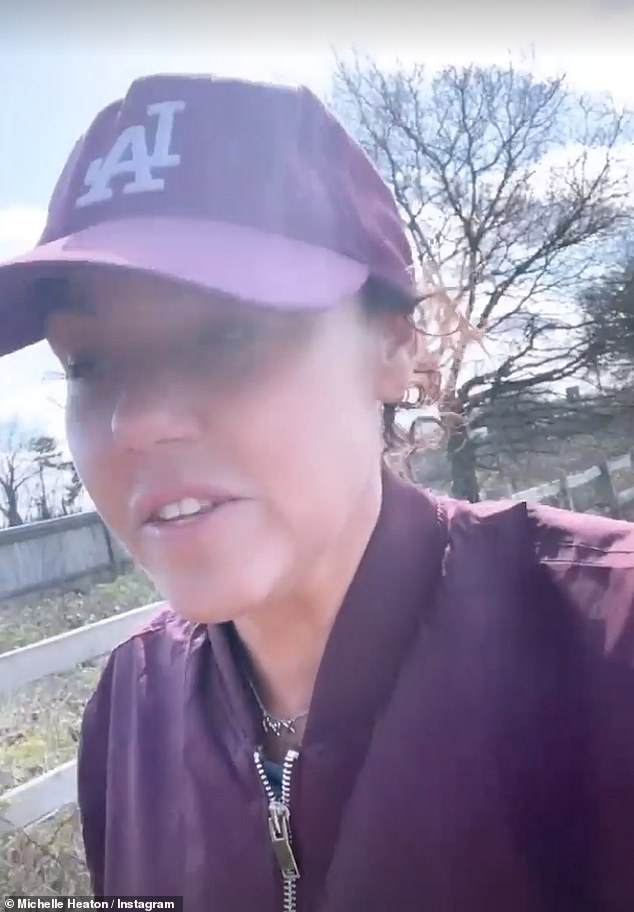 Family affair:  Michelle caught coronavirus at the same time as her husband Hugh Hanley and their two children Faith, nine, and Aaron, seven

The outing comes after Michelle spoke to Lorraine last week at how baffled she was by the whole family’s infection.

She explained: ‘I’m not suffering from any major symptoms. I’m really bewildered we all got it at the same time. I’m in a bit of weird bubble.’

Michelle got the vaccine early, because she’s on the vulnerable list of people with underlying health conditions, a month before she caught the virus. 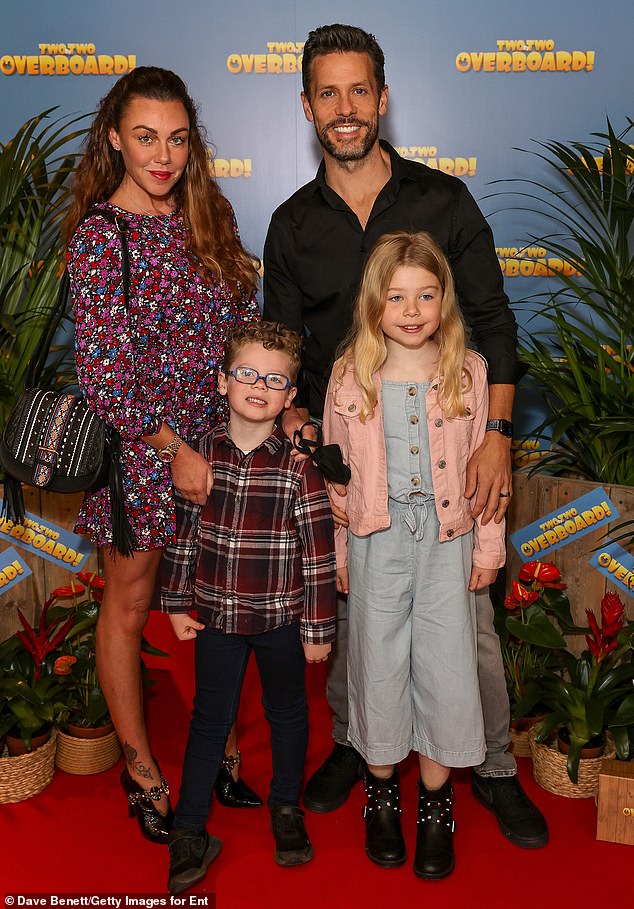 ‘I’m really bewildered’: Michelle revealed recently that she contracted Covid one month after she had her first Pfizer jab

Dr Hilary Jones, who was also on the show, told Michelle: ‘We know you’ll have created antibodies and without those antibodies, you being exposed to Covid as you have been, could have made it much worse.

Michelle agreed, replying: ‘I’m so grateful to the NHS and I’m a massive supporter of vaccines in general. We get vaccines when we go abroad.

‘No one is invincible, we’re all vulnerable. We’ve all lost friends and family, our next door neighbour was one of the first people who passed away.’

Michelle also told how a nurse warned her she could have been hospitalised with Covid had she not had her vaccine. 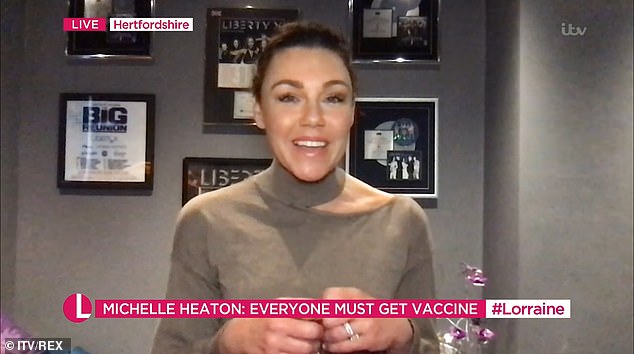 Health: Speaking on Lorraine recently, Michelle insisted ‘no one is invincible’ as she encouraged people to get vaccinated

She said: ‘I had the Pfizer vaccine four weeks to the day I got invited cos I was on the vulnerable list. I remember being really tired and I was a little bit nauseous that night.

‘Biweekly, we get tested as a family when we said yes to being part of a random survey for Oxford to see where Covid is rife. It always came back negative until now. All four of us are positive.

‘It’s a bit of a shame it’s half term because we were planning on having barbecues. It’s also probably a good time because it means they don’t miss anymore school.

‘The nurses did say to me, each person in the household has a two hour call to try and track and trace. 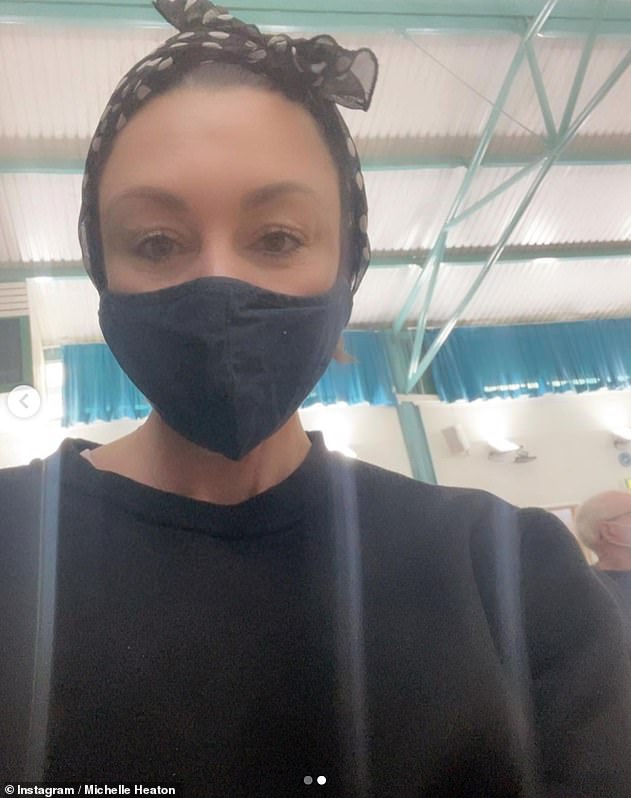 ‘Without my jab, I could’ve felt worse’: The Liberty X star recently took to Instagram to thank the NHS for encouraging her to get the shot (pictured at the vaccine centre)

‘I was thinking the vaccine didn’t work, it wasn’t until she said to me, ‘thank goodness you did get your first vaccine because it could have been a lot worst, you could have been hospitalised.”

Michelle also took to Instagram to thank the NHS for encouraging her to get the shot.

Alongside a cheery image of her kids, the singer said: ‘As a person with many underlying health issues I could have been a lot worse, or may be hospitalised. I’m doing OK, enough strength to tell the kids off anyway!’

It typically takes a few weeks for the body to build immunity after vaccination, with regulators insisting the best protection comes seven days after the second Pfizer dose, which is usually given three weeks after the first. 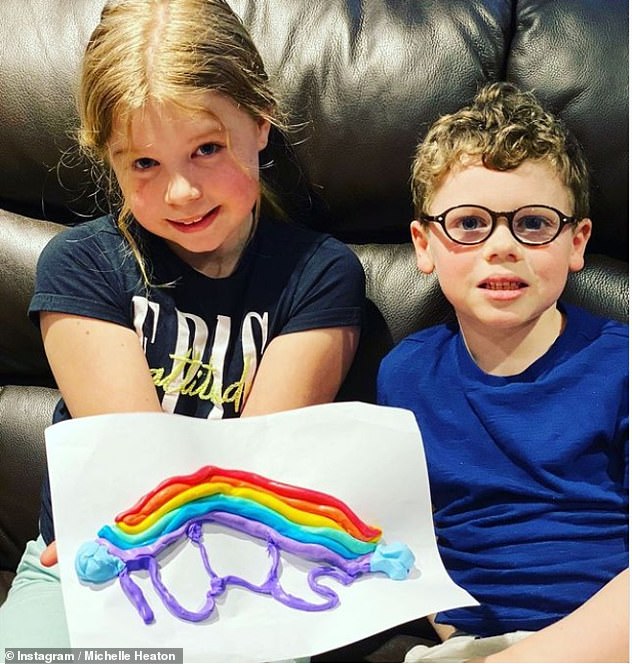 ‘I’m doing OK, enough strength to tell the kids off anyway!’: The doting mum didn’t let her positive test result stop her from carrying out her parental duties