Michelle Knight introduces her husband to the world

Michelle Knight has introduced her husband to the world and revealed how he helped her find peace – almost five years after she escaped Ariel Castro’s House of Horrors in Cleveland.

Knight was 21 when she was kidnapped by Castro in 2002 before being held captive and sexually abused for more than a decade.

She and two other captives – Gina DeJesus and Amanda Berry – were rescued in May 2013.

Now, in an interview with Dr. Phil that aired Tuesday, Knight revealed she is happily married and loving her new life.

Knight – who now goes by Lily Rose Lee – told Dr. Phil that she was first introduced to her husband Miguel by mutual friends.

Michelle Knight has introduced her husband Miguel (pictured together) to the world on Dr. Phil

The pair then bumped into each other by chance before love blossomed and they tied the knot in 2016 and enjoyed a honeymoon in Hawaii.

‘This is the biggest news I got for you Dr Phil. This is my sweetheart Miguel,’ an excited Knight announced on the program.

‘I love him so much and he’s been a great support system for me. Now that I found love and I’m happy, I can do anything.’

Miguel added: ‘She’s a lot different than any person I’ve ever met.

‘She’s been through a lot of things and it still surprises me every day how strong she is.’

Speaking to Dr. Phil, Knight, 36, elaborated on how the pair met and fell in love. 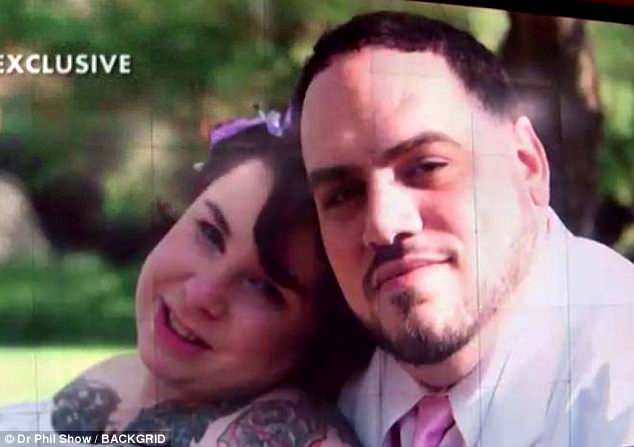 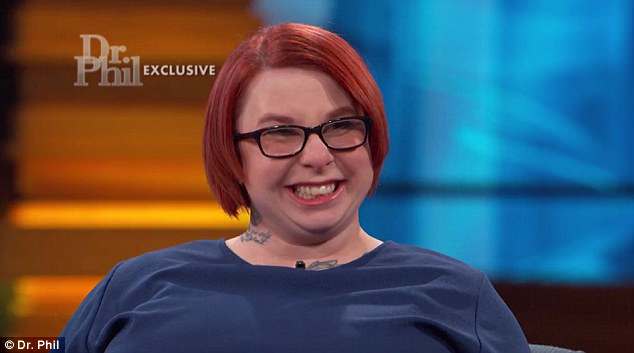 Knight, who was one of three women  kidnapped and held captive for more than a decade in a Cleveland House of Horrors, revealed that she is now happily married 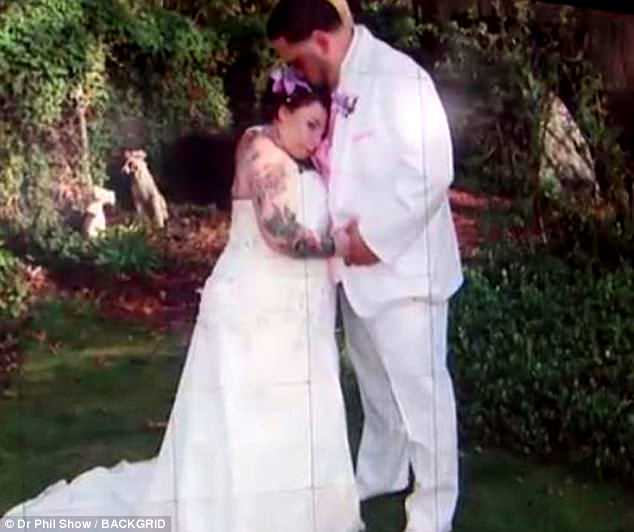 ‘Dr. Phil, I’m married,’ she said as the audience began cheering as wedding photos of the couple appeared onscreen.

‘We met through mutual friends,’ she said.

‘And then I looked up, and I was like, ‘that’s you that I’ve been talking to, yeah, yeah that’s you.’

‘And he looked down as was like, ‘oh my Gosh I can’t believe it.’ 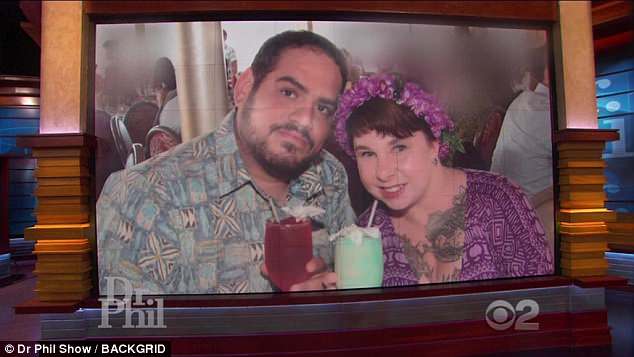 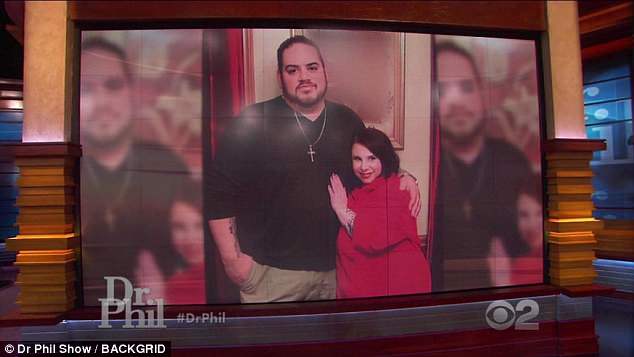 Describing her husband as her ‘safe teddy bear,’ she said he has helped her come to terms with what she went through

Describing her husband as her ‘safe teddy bear,’ she said he has helped her come to terms with what she went through.

‘He’s a sweetheart, he’s a gentle giant,’ she said.

‘He helps me through a lot of my struggles, but I don’t let those struggles affect how I live my life. I still move forward.’

She added: ‘When I first told him, it took a while before he could actually comprehend what was going on and how I felt.

‘It took a while before he was like, ‘you know what, I don’t wanna know more.’

Knight now works as a motivational speaker, travelling the world to speak about human trafficking and missing and exploited children.

‘I am really enthusiastic about how my life is going right now,’ she added.

‘My journey into trusting again – it was a long and painful road.

‘I came so far and everything is so peaceful now.’

She added: ‘Buying my first home and feeling safe was the most important part. I painted the whole house myself, I also painted pictures that I put on the wall.’ 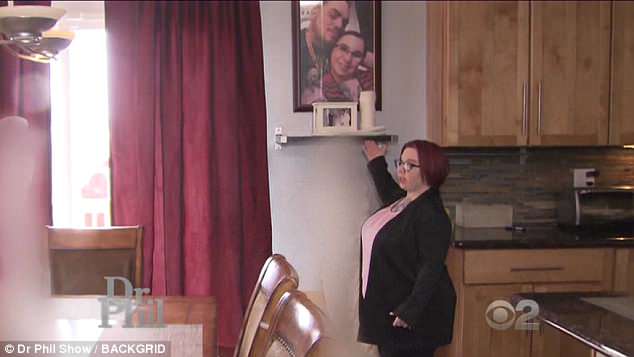 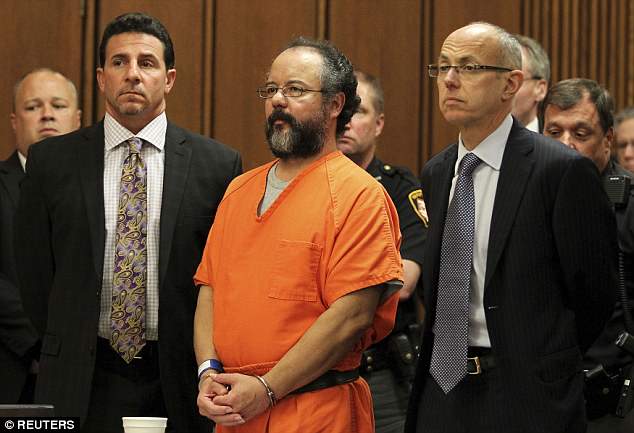 Ariel Castro (pictured) was sentenced to life in prison for abducting, raping and holding captive three women as well murder for forcing one of the women to abort her pregnancy

Knight talks more about her life now in her second memoir – ‘Life After Darkness: My Journey To Happiness’ – which will be released in early May, coinciding with the fifth anniversary of her escape.

In her first best-selling book – ‘Finding Me’ – she revealed the brutal physical, mental and emotional torture that Castro subjected her to before his other victims were brought into the home.

The victim recounted harrowing details about emotional punishment, in which Castro repeatedly told her: ‘You’re a person with no meaning.’

Knight, who had a troubled upbringing as a victim of sexual abuse, had been on her way to a foster care appointment on August 22, 2002.

She was attempting to get her two-year-old son, Joey, back when she stopped to ask for directions at a local store.

There, she ran into Castro, who was one of her friends’ father. 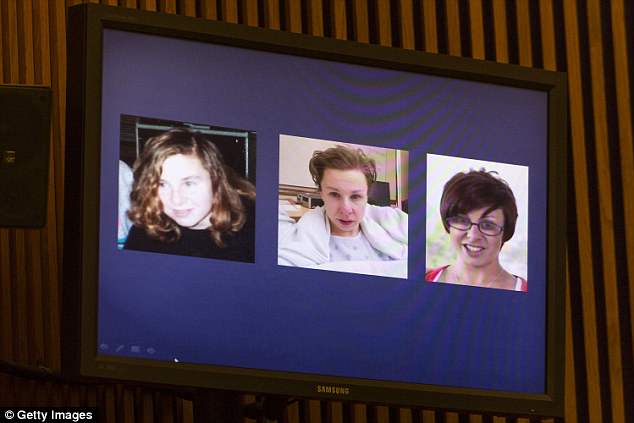 Photographs of Knight showing her (L-R) before her abduction, the day after her escape and in a video released on July 9, 2013 are displayed during Castro’s sentencing in 2013

He offered her a ride from the store, but said he needed to stop by his house.

He asked if she wanted to come inside to get a puppy he had been keeping for her son.

Knight told People: ‘We stepped into a bedroom and he said: ”The puppies are underneath the dresser.”

‘I looked down to where he was pointing and then, suddenly – Slam! – he closed the door… The gentle guy who’d seemed so nice to me had turned into a madman. He pushed me to the ground.

‘I closed my eyes and tried to prepare myself for what might happen next. To this day I still cannot believe what did.’

Knight recalled being strung from wire in a bedroom where Castro returned two days later to rape her before dragging her down two flights of stairs and into the basement.

She said: ‘What happened over the next three hours is still hard for me to think about. He didn’t just rape me the way he had upstairs. He murdered my heart.’

Knight became pregnant five times during her years in captivity. She had been starved and beaten by Castro until she miscarried.

In April 2003, Castro abducted Berry and brought her into the house.

Knight, who refers to Castro as ‘the dude’ in her writing, recalled one night: ‘Amanda’s mother was on the news pleading for people to help find her daughter. 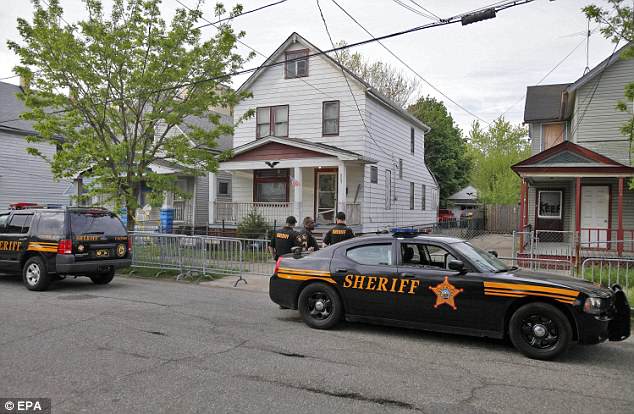 Law enforcement officers stand watch in front of Castro’s house on Seymour Avenue in Cleveland, on May 7, 2013

‘The dude laughed. ”You see that? At least someone’s looking for her. But who’s looking for you? Not a soul. That’s because you don’t mean nothin’ to nobody.”’

By April 2004, Castro had kidnapped DeJesus and brought her to the home.

He allowed her to be kept in the same room as Knight. The two girls developed a bond and held hands while they were abused.

Castro later loosened their chains after Berry became pregnant and allowed her to keep the baby.

Knight’s son was adopted while his mother was in captivity.

The three girls were eventually allowed to go into the kitchen and living room for a few hours on the weekends.

Berry took advantage of Castro leaving the inner front door unlocked and screamed through the storm door for help in May 2013. A neighbor heard her and phoned 911.

As police officers descended the stairs to their basement prison, Knight said she turned to DeJesus to tell her: ‘You won’t believe this. We’re free. We are going home.’

Castro was charged with 512 counts of kidnapping, 446 counts of rape and two counts of aggravated murder in the death of Knight’s unborn baby.

He committed suicide a month into his prison sentence, on September 3, 2013.