Black Panther has sold out theaters across the country since its Friday premiere, but Michelle Obama was one of the lucky few who got to see it on its opening weekend.

Her review? She loves it.

The former first lady tweeted on Monday her congratulations to the cast and crew who made the movie.

‘Because of you, young people will finally see superheroes that look like them on the big screen,’ Mrs Obama wrote.

‘I loved this movie and I know it will inspire people of all backgrounds to dig deep and find the courage to be heroes of their own stories. 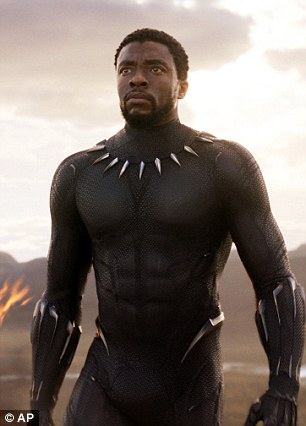 Michelle Obama (left) is a big fan of the new Black Panther movie, which premiered on Friday. The film stars Chadwick Boseman, right, as the titular Black Panther superhero 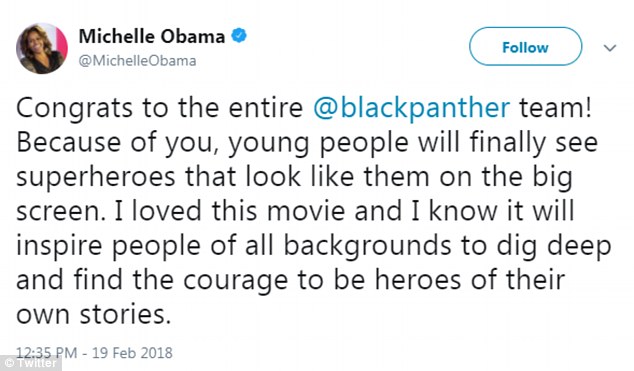 Mrs Obama wrote this tweet on Monday congratulating the cast and crew on their achievement. ‘Because of you, young people will finally see superheroes that look like them on the big screen,’ she said

Black Panther is based on a Marvel superhero character of the same name.

Chadwick Boseman plans the titular character, also known as King T’Challa, the ruler of a fictional African nation called Wakanda, a technologically advanced society that has never been colonized.

He conflicts with Michael B. Jordan’s Eric Killmonger, who intends to take over the throne.

It’s received an A+ CinemaScore, the only Marvel film to have done so besides 2012’s ‘The Avengers.’

Since its premiere on Friday, the film has broken more than a dozen box office records – including biggest February opening weekend of all time.

Black Panther’s immediate success has been evidence for many that creating films with a black audience in mind pays off.

By current estimations, the film has already made $235million in its opening weekend.