Michelle Wolf’s routine for the White House Correspondents’ Association dinner on Saturday night at the Washington Hilton was raunchy and controversial at times.

It including one joke about abortion that visibly unsettled the crowd, and personal attacks on White House staffers present, including a visibly uncomfortable Sarah Huckabee Sanders, the White House press secretary.

But Wolf also drew laughs with her wide-ranging attacks on politicians and the media, and especially President Donald Trump.

Here are some of the highlights:

Wolf also addressed Trump’s absence head on: ‘I would drag him here myself, but it turns out that the president of the United States is the one p***y you’re not allowed to grab.’

On Trump pulling out of the Paris climate accord, she said: ‘He said he was going to pull out and he did, and that’s a refreshing quality in a guy.’

‘You might be rich in Idaho but in New York you’re just doing fine,’ she said.

Using call and response from the audience, Wolf shouted ‘Trump is so broke’, to which the audience responded ‘how broke is he?’

Among her responses were: ‘He has to fly failed business class’; ‘He looked for foreign oil in Don Jr’s hair’; ‘Southwest used him as one of their engines’; and ‘He had to borrow money from the Russians and now he’s compromised.’

‘Trump is racist. He loves white nationalists, which is a funny term for a Nazi, it’s like calling a pedophile a kid-friend or Harvey Weinstein a lady’s man.’

And finally: ‘He grabs p**sies because he thinks there might be loose change in them.’ 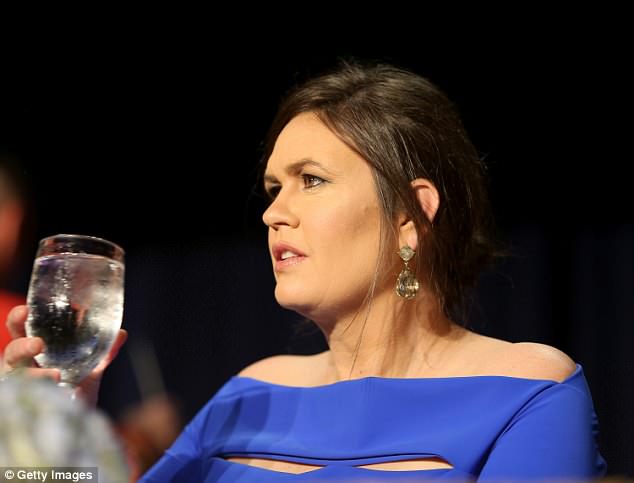 The room grew quiet and groans were heard as Wolf directed harsh jokes at White House Press Secretary Sarah Huckabee Sanders, who was sitting just feet away, including attacks on her appearance.

‘I have to say I’m a little starstruck, I loved you as Aunt Lydia in A Handmaid’s Tale. Mike Pence, if you haven’t seen it you would love it,’ said Wolf, turning to Sanders.

‘Every time Sarah steps up to the podium, I get excited because I’m not really sure what we’re gonna get. A press briefing, a bunch of lies, or divided into softball teams. [in deep voice] “It’s shirts and skins and this time don’t be such a little b***h Jim Acosta.”‘

‘I like Sarah, I think she’s really resourceful. She burns facts and uses the ash to create a perfect smokey eye,’ the comedian added. ‘Maybe she’s born with it, maybe it’s lies. It’s probably lies.’

Wolf also took shots at counselor to the president Kellyanne Conway. ‘Man, she has the perfect name for what she does. Conway. It’s like if my last name was tells-jokes-frizzy-hair-small-t*ts.’

Ivanka Trump also came under fire: ‘Ivanka, she was supposed to be an advocate for women but she is about as helpful to women as an empty box of tampons.’ Wolf also compared the president’s daughter to a ‘diaper genie’, saying she ‘Looks sleek on the outside, but inside is full of s**t.’ 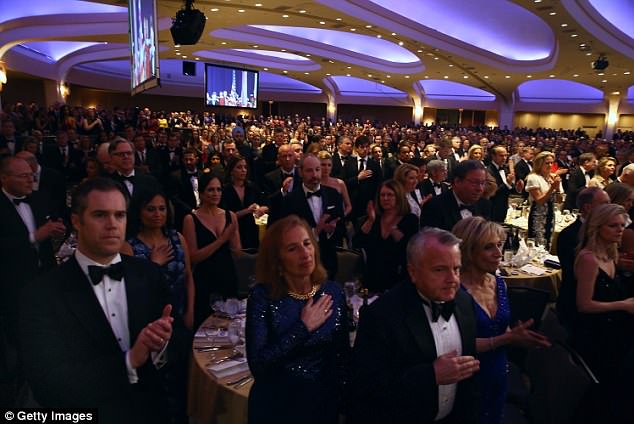 ‘I’m here to make jokes. I have no agenda, I’m not trying to get anything accomplished. So everyone who’s here from Congress, we should get right get along.’

‘Mitch McConnell isn’t here tonight, he had a prior engagement. He’s finally getting his neck circumcised.’

‘Paul Ryan couldn’t make it, of course he’s already been circumcised. Unfortunately while they were down there they also took his balls.’

‘I known there’s a lot of people who want me to talk about Russia, and Putin, and collusion, but I’m not gonna do that because there’s also a lot of liberal media here, and I’ve never really wanted to know what any of you look like when you orgasm. Except maybe for you, Jake Tapper. I bet it’s something like this [blank face] “Ok, that’s all the time we have.”‘

‘CNN, you guys love breaking news. And you did it, you broke it.’

‘Fox News is here so you know what that means, ladies: cover your drinks.’

‘We’ve got MSNBC here. MSNBC’s new slogan is ‘This Is Who We Are’, guys that is not a good slogan.’

‘We cannot forget about Rachel Maddow, she’s the Peter Pan of MSNBC. But instead of never growing up she never gets to the point. Watching Rachel Maddow is like going to Target. You went in for milk but you left with shampoo, candles and the entire history of the Byzantine Empire.’

‘What would I do without Megyn Kelly? Probably be more proud of women.’

‘I watch Morning Joe every morning. Now we know Mika and Joe are engaged, it’s like when a MeToo works out.’