Michigan girl, 14, is on life support with suspected case of the mosquito-borne disease

Savannah DeHart, 14 (pictured), from South Portage, Michigan, came down with a headache earlier this month

A Michigan teenager is in a hospital fighting for her life after reportedly contracting a rare mosquito-borne disease.

Savannah DeHart, 14, from South Portage, came down with what seemed like simple headache earlier this month.

Within days, she could no longer breathe on her own and eventually needed to be placed on ventilator, reported News 8.

Doctors at Bronson Children’s Hospital in Kalamazoo told her parents they believe she has Eastern Equine Encephalitis (EEE).

She is the latest in a series of people reported to have the infection, including a Massachusetts woman who died on Saturday and a man from the same state who fell into a coma this month.

Savannah’s mother, Kerri Dooley, told News 8 that she was shocked to see her daughter’s symptoms progress so quickly.

‘She just kind of lays there for now. Her brain is trying to heal itself, and she can’t do anything until that happens,’ Dooley said.

‘It’s been, probably the worst time of my life. I watched my daughter almost “check out”.’

EEE is a rare disease caused by a virus that is transmitted to humans by infected mosquitoes.

It was first detected in Massachusetts in 1831 and typically affects about an equal number of horses and humans every year: about five to 10.

Most people don’t develop symptoms, but those who do can experience chills, a fever, a headache and vomiting.

Occasionally, the disease can cause seizures or life-threatening brain swelling (encephalitis).

There is no cure and treatments consists of supportive therapy such as respiratory support and IV fluids.

About one-third of those with EEE die from the disease, according to the Centers for Disease Control and Prevention. 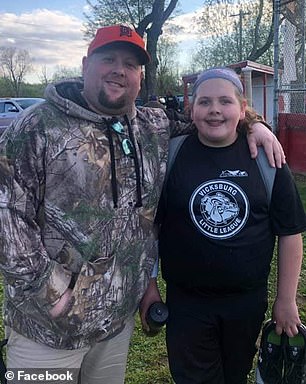 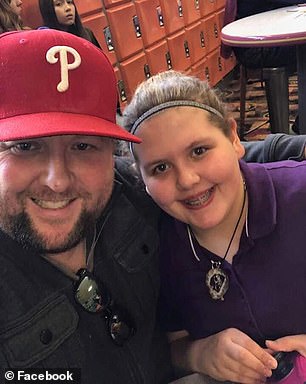 Within days, she was struggling to breathe and was rushed to Bronson Children’s Hospital in Kalamazoo. Doctors told her parents they believe she has Eastern Equine Encephalitis. Pictured, left and right: Savannah with her stepfather, Rodney Dooley 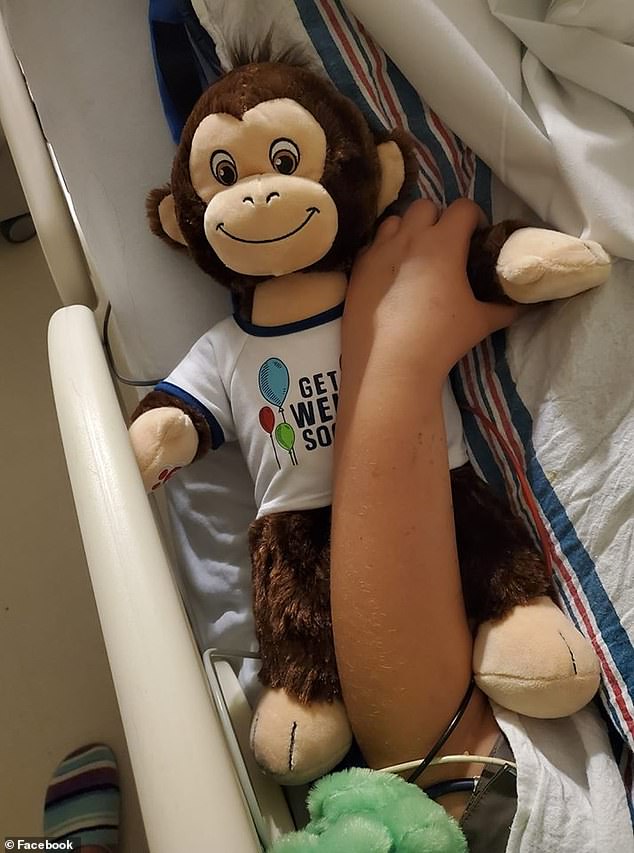 The rare mosquito borne virus has reportedly infected three people in Michigan this year, including Savannah, and kills one in every three people who fall. Pictured: Savannah’s arm around a stuffed toy in the hospital

The Michigan Department of Health and Human Services announced on Monday that it was investigating three suspected cases, and Savannah is one of them.

She is currently undergoing additional testing to confirm she has EEE.

Dooley had been providing updates about her daughter’s condition on a Facebook page titled #SavannahStrong.

She wrote on Tuesday that doctors inserted a feeding tube in Savannah’s stomach and that she is having trouble breathing, but she is progressing in physical therapy.

‘She was able to hold her head up on her own for a couple of minutes which, to this mama, is huge,’ Dooley wrote.

WOOD reported that once Savannah’s condition improves, she will be transferred to Mary Free Bed Rehabilitation Hospital in Grand Rapids.

The family has started a Facebook fundraiser to help cover medical expenses. As of Wednesday evening, more than $2,500 has been raised out of a $10,000 goal.