Gangland identity Mick Gatto was nowhere to be seen as his disgraced son-in-law was jailed for 15 years.

Sarah Gatto’s husband Danny Awad was on Tuesday sentenced to a non-parole period of 10 years in jail after being found guilty of trying to take possession of $10 million worth of cocaine.

The father of two’s wife held her head down in disbelief as County Court of Victoria Judge Mark Dean declared his sentence before a packed courtroom in Melbourne.

Danny Awad is officially a convicted bumbling wannabe drug dealer. He opened up a case of drugs even after suspecting cops were watching. He is married to the daughter of gangland identity and hitman killer Mick Gatto 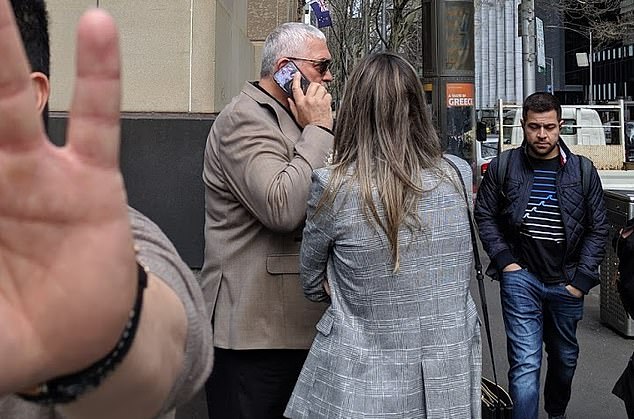 Gangland identity Mick Gatto takes a phone call while his tearful daughter stands nearby after his son-in-law was found guilty in September. He was notably absent from the County Court on Tuesday 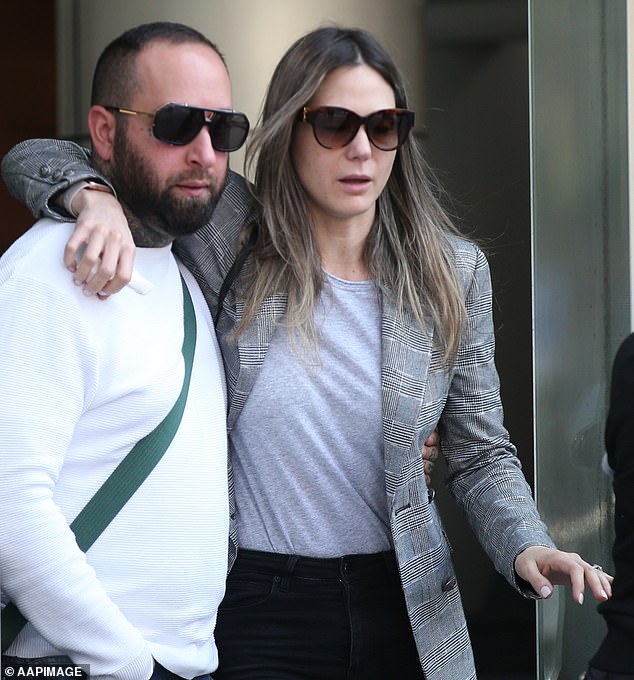 Mick Gatto’s daughter Sarah is comforted as she leaves the County Court of Victoria after watching her husband convicted of drug offences. Her dad was hiding across the road and was not keen on being photographed in September. He was not there on Tuesday

Gatto, who killed hitman Andrew ‘Benji’ Veniamen in self-defence at the height of Melbourne’s gangland war, had spent his life distancing himself from the insidious drug trade.

He had provided a glowing reference for the father of his grandchildren.

At Awad’s verdict in September, the former Carlton Crew boss was spotted across the road from the County Court of Victoria where his daughter’s husband’s fate had been sealed.

Awad’s accomplice and mate of 10 years John Tambakakis must spend the same time behind bars for his role in the crime.

Unlike Awad, Tambakakis had tried to gain some sympathy from the judge due to an illness which cause him pain in the testicles.

Judge Dean said the men had been senior members of a crime organisation who attempted to bring in 22kgs of cocaine worth up to $12 million on the street.

‘You were both motivated by greed and profit,’ he told the men.

Awad’s supporters had appeared confident upon entering the packed courtroom, but their laughs soon turned to tears.

‘Oh my God,’ one woman was heard to mutter as Judge Dean explained the seriousness of Awad’s crime.

A confident Awad told his family to ‘relax’ as he was led from court to begin his sentence.

His grubby crime had been doomed from the start after Australian Federal Police were alerted to a shipment of printers arriving from Mexico in April 2017.

The shipment was loaded with 22kg of cocaine, which would be later found to be 70 per cent pure.

Police seized the shipment before it was to be delivered, substituting the 10 blocks of cocaine with harmless powder.

They inserted tracking and recording devices into the printers and waited to see who picked up the packages. 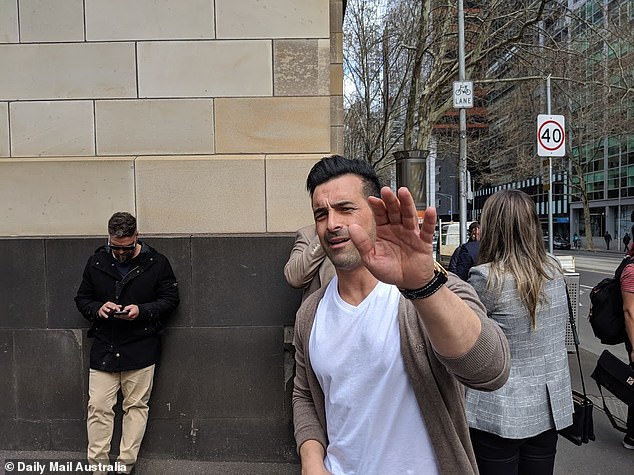 CCTV footage played to the County Court of Victoria jury showed Awad’s partner in crime John Tambakakis take possession of the printers and move them to his garbage business site in Campbellfield – 16kms north of Melbourne.

The crook was seen driving around the site in the hours following the drop off as he looked to see if police were watching him.

At 8pm that night, he spotted a cop and asked him for directions.

The cop played dumb and Tambakakis drove home, where he was followed by police.

Tambakakis was found guilty of the same charge as Awad.

Police later observed Awad driving around the Campbellfield site in his black BMW.

A third alleged co-offender, who cannot be named, was also allegedly in on the crime.

That man allegedly took possession of the drugs after it was taken to his Coburg home in a Budget truck where it was left overnight.

Police alleged the plan was for the drugs to be taken to a warehouse in Airport West where Tambakakis and Awad were to repackage the dope into deal bags.

Awad was later observed driving Tambakakis to the warehouse where they were seen going inside with a backpack.

Police alleged that backpack contained a vacuum sealer and plastic bags to repackage the cocaine into deal bags.

They also brought with them a scanner, which was used to detect audio devices and bugs. 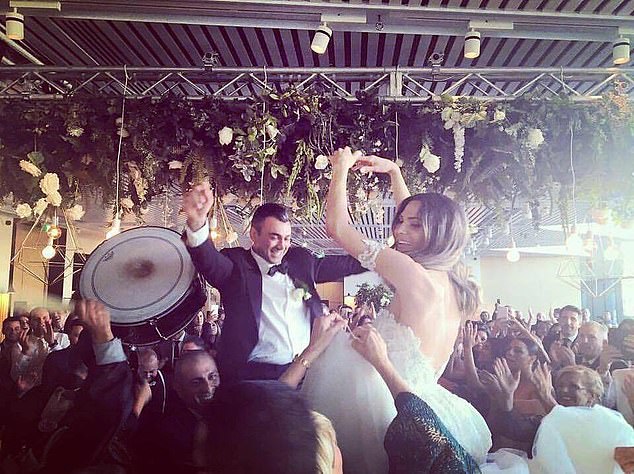 Danny Awad dances up a storm with the daughter of gangland identity Mick Gatto. Awad will spend at least 10 years in jail after being done on a bumbling drug charge 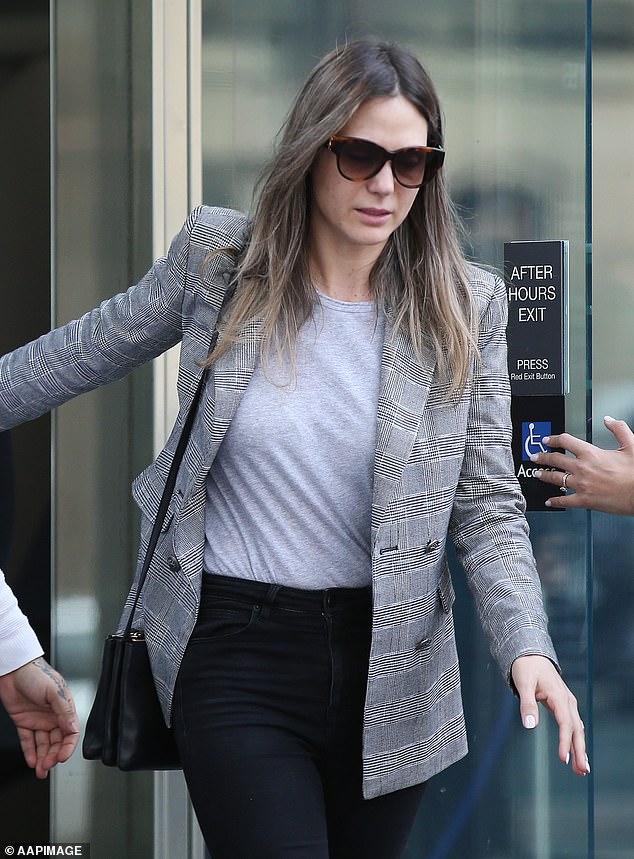 Sarah Gatto faced her husband’s jailing alone while her dad crept about outside the Supreme Court across the road, away from a waiting media pack, last Spetember

Cops picked up the scanner pulsing its audio devices as the crooks worked to detect if they had been had.

The scanner worked, but still the crooks proceeded.

‘I don’t know what to say, shall we open one,’ one asked.

‘Yeah but we’re not going to open anymore,’ a voice responded.

The men were right to be worried.

When they opened one printer up, they found the device.

CCTV showed the men calmly walking back to their van and making their getaway.

While police couldn’t pin an importation charge on the pair, prosecutors assured the jury that Awad and his mates knew exactly what they were trying to handle.

Their barristers claimed bot Awad and Tambakakis had no idea the printer boxes were loaded with cocaine.

Awad’s barrister went so far as to suggest his client had ‘an innocent explanation’.

The jury did not swallow it.

The jury is still to deliver its verdict on the third accused man.