Mick Hawi asked childhood friend to look after his sons

Mick Hawi’s childhood friend has revealed the slain former Comanchero bikie boss asked her to look after his wife and two sons if anything happened to him.

Kylie Hogan promised in a Facebook message to widow Carolina Gonzelez that she would never leave her side.

She wrote under a photo of the couple: ‘I have loved watching you two love birds since day 1 … i made a promise to Mick i would never leave your side when you and the boys need me and i will always be there for u all. i love you babygirl … RIP Mick … i will truly miss seeing u … love u xxxx (sic).’ 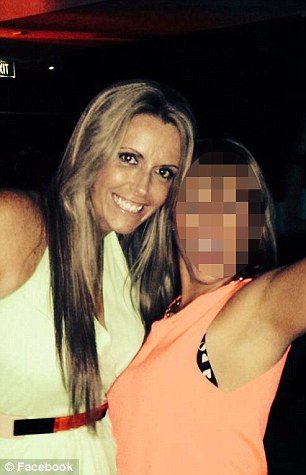 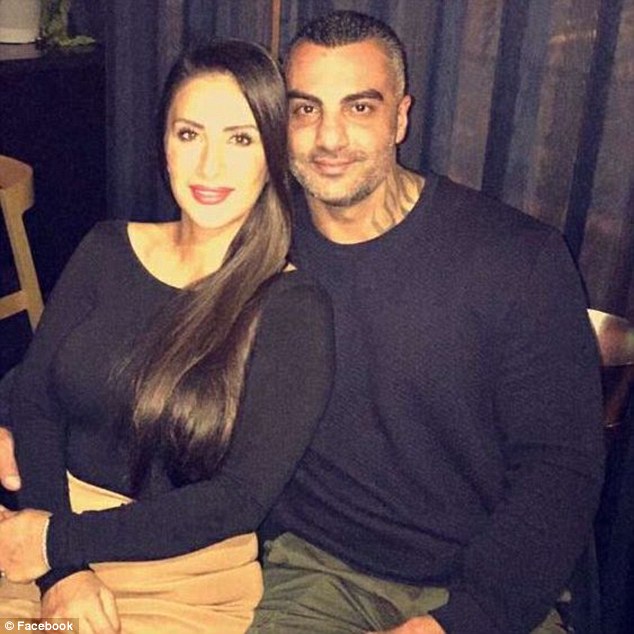 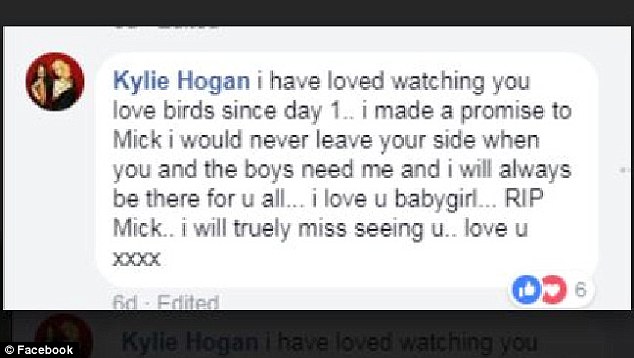 She wrote under a photo of the couple: ‘I have loved watching you two love birds since day 1’

Ms Hogan also posted a tribute to Hawi the day before his funeral.

‘I have so many wonderful memories with you growing up as a kid and watching you and Carol become parents to those beautiful boys,’ she wrote on February 21.

‘I promise to help look after them and always be there for them all. R. I. P Mick its not goodbye, its see you Later (sic).’

It comes after new details emerged of widow Ms Gonzelez’s last ditch effort to fulfil her desire to have a baby with her late childhood sweetheart by asking doctors to extract his sperm.

Ms Gonzalez urgently applied to court for the procedure to be performed last week after her husband was gunned down outside a gym in Sydney’s south.

He was buried at a traditional Islamic ceremony on Thursday afternoon – with tensions flaring between police and limousine-riding funeral guests, and Ms Gonzalez herself finding herself locked in an angry confrontation with online trolls. 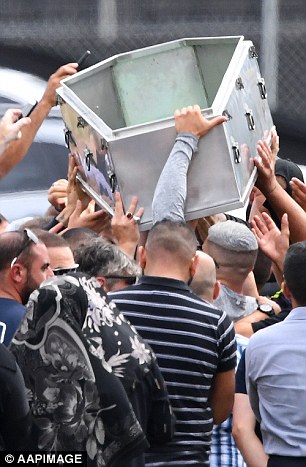 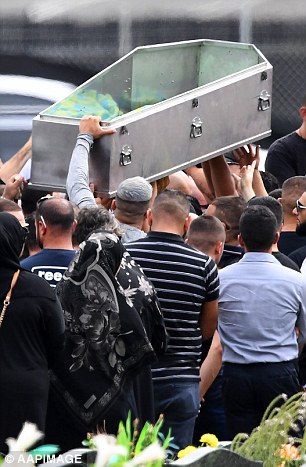 Mick Hawi’s burial: Mourners held an empty coffin over their heads after piling dirt on the former Comanchero president’s bare body at Rookwood necropolis on Thursday 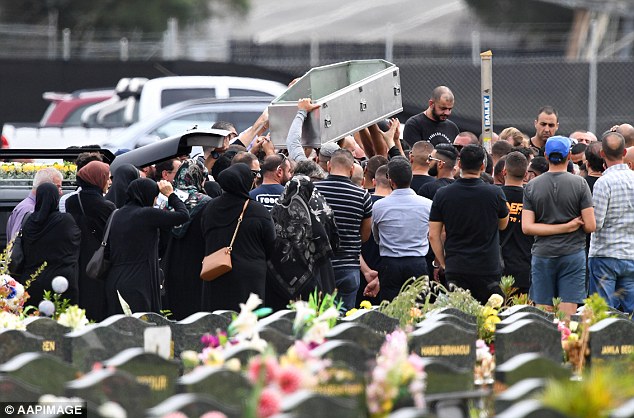 Hundreds of people gathered in the Islamic section of the graveyard to bury Hawi, the 37-year-old former national president of the Comanchero 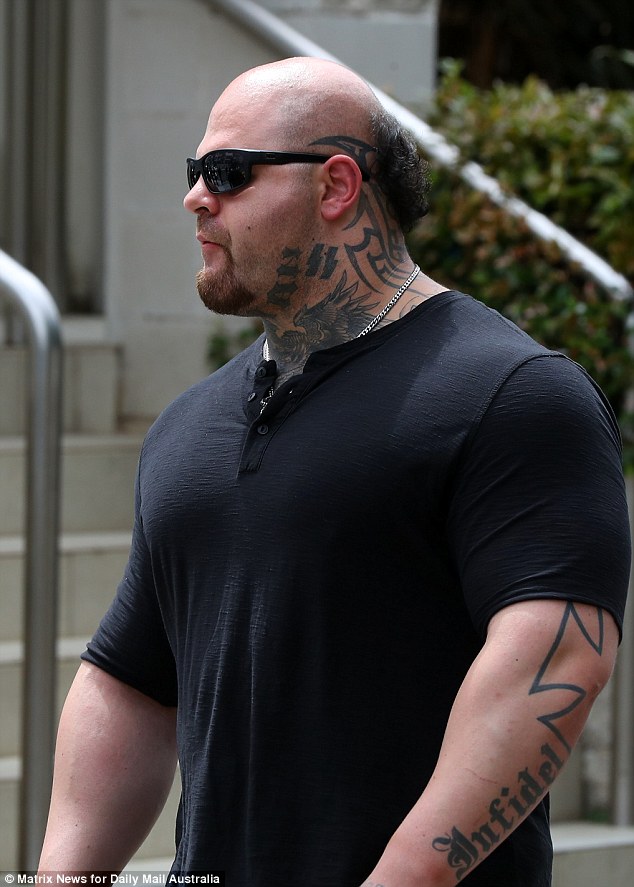 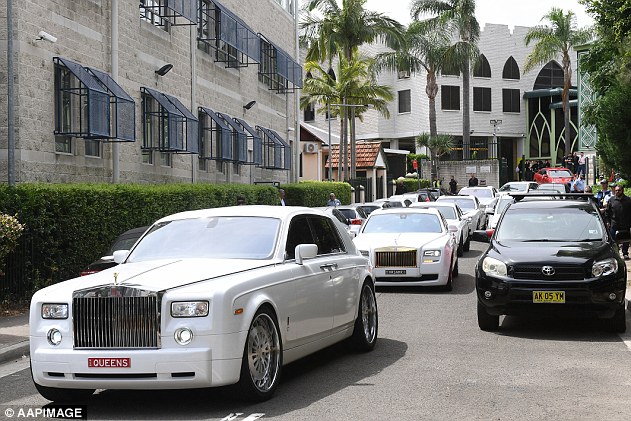 Hawi’s family arrived and left the service in a fleet of Rolls Royces, Bentleys and a lone Porsche 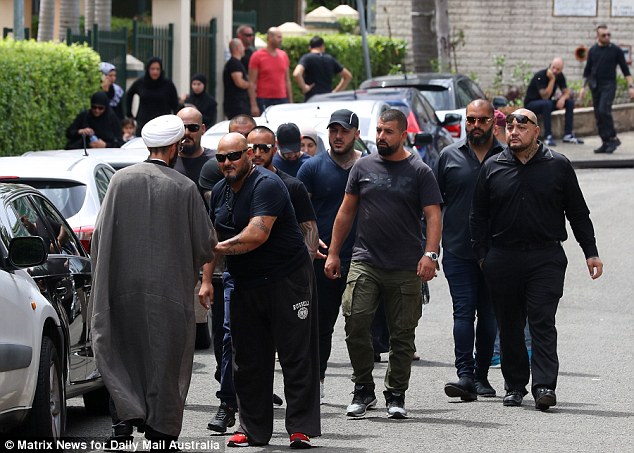 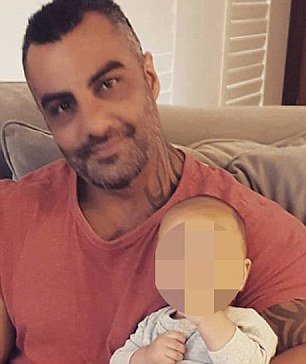 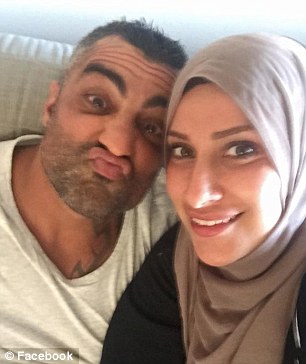 Hawi’s wife Carolina Gonzalez (right, Hawi on left) made an urgent application to obtain her late husband’s sperm within hours of his death

Court documents obtained by Daily Mail Australia revealed the sperm procedure could only be performed with investigators examining his murder present.

‘The Coroner… advised … that the deceased is situated in a locked zipped bag and that the bag cannot be unzipped without the presence of detectives,’ said affidavit written by Ms Gonzalez’s lawyer.

Gang squad detectives had no objection to the procedure being performed.

The court approved the operation – but Ms Gonzalez will need the court’s sign off to use the sperm to get pregnant via IVF.

Hawi’s funeral service on Thursday was monitored by a small army of police.

A large crowd of men who arrived at the service in three white limousines were stopped on the way to Hawi’s burial by bikie-busting Strike Force Raptor.

One officer, Raptor 13 – Senior Constable Andrew Murphy – drew his Taser and shouted ‘you’re going to get searched’ as tensions flared between the groups. 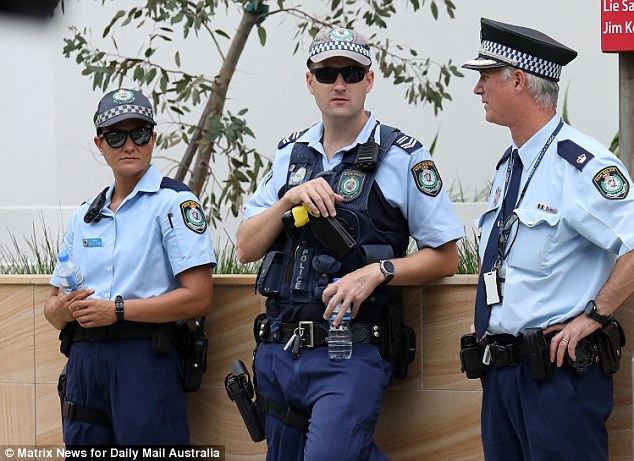 Police were seen on every corner of the block near the funeral service on Thursday. It was a little more awkward for the Gangs Squad detectives who had to supervise his body 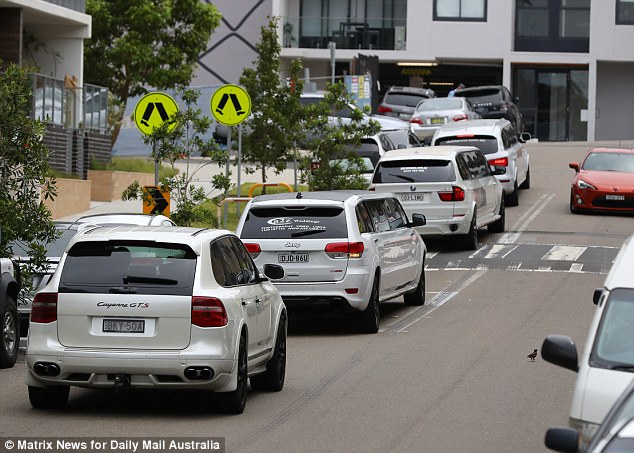 A brigade of guests at the service arrived in three white limousines. They were later stopped by Strike Force Raptor officers while on their way to the burial 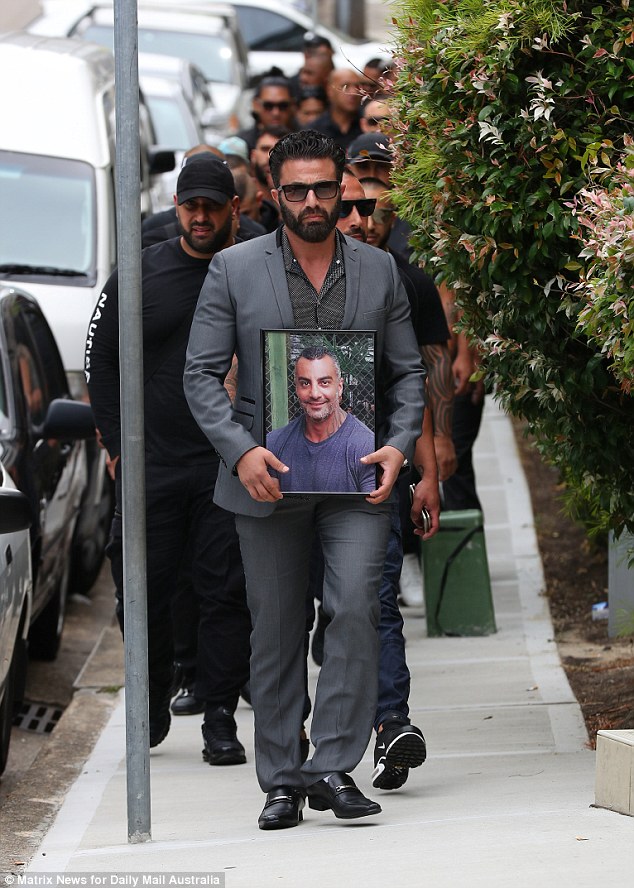 A considerable group of men walked together down the street towards the Arncliffe mosque where Hawi was buried, with a man in a grew suit carrying a framed photograph of Hawi 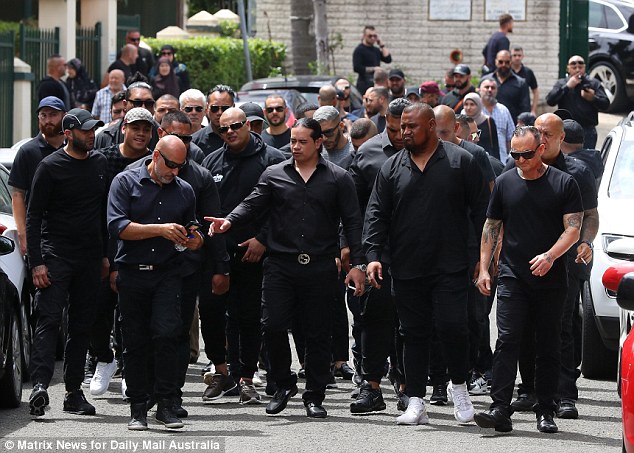 About 20 men, dressed head-to-toe in black, walked the street together following the funeral service 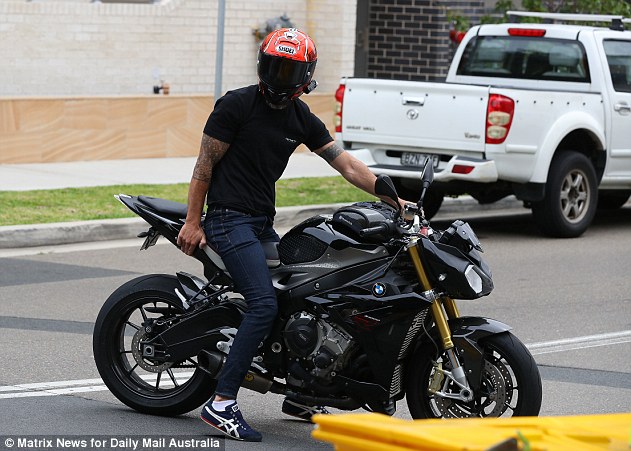 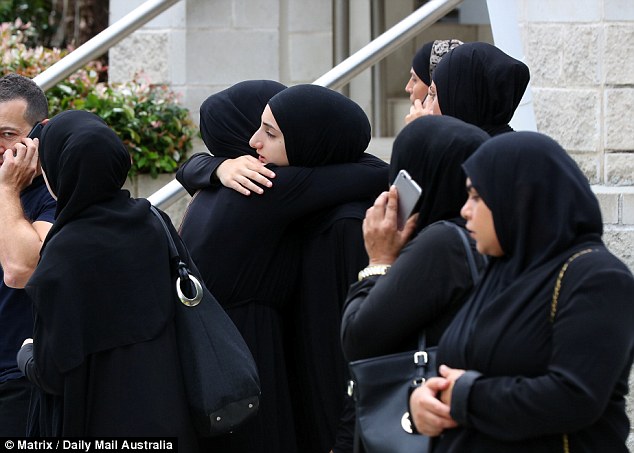 Mourners embraced outside the mosque after the conclusion of the service

‘Brother, there’s 30 of us (and) there’s two of you… show some respect’ one of the men said as Raptor 13 pushes the surging group out of his face.

‘I don’t care, you’re going to be searched, stand against the fence all of you… you’re all being searched for firearms and drugs,’ he responded.

And just hours after her husband’s body was covered with earth at Rookwood cemetery, a furious Ms Gonzalez fired up at trolls online.

The bereaved widow was furious after a woman claimed Hawi’s children were suffering because of their dad had been ‘involved in things that cost him his life’.

‘Before you speak you should have some facts!’ she fumed. ‘My husband did not do this to his children!

‘If you only knew the truth, you would hide in a cave from embarrassment from what you have just written.

‘My husband left that life a long time ago! How dare you write something like that?

‘What you have done is worse to my kids – planting this seed in their head is not nice of you.’

Police are still hunting for the man’s killers. 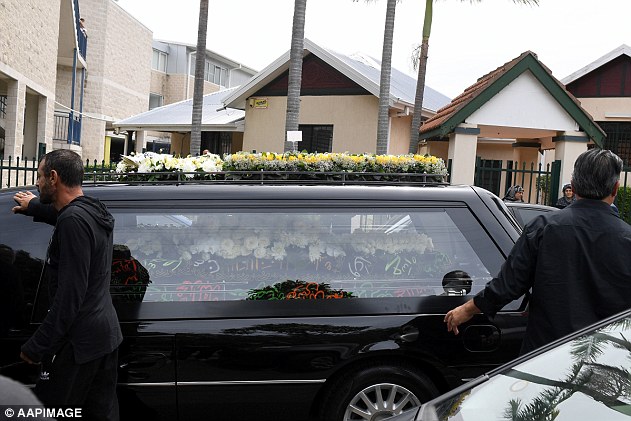 Hawi’s casket was covered with an elaborate flower display. His body was removed from its coffin prior to burial