Mick Jagger is back in Liverpool ahead of the Rolling Stones’ first concert in the city in over 50 years.

And in keeping with the band’s tour celebrating its 60th anniversary, the legendary frontman took to his social media platforms and shared a series of photos of himself striking a pose next to some of the more recognizable monuments and murals.

It comes as the iconic rockers are set to perform at the Anfield Stadium Thursday night as part of their summer 2022 European ‘Sixty’ tour.

Stones on tour: Mick Jagger, 78, took in the sites of Liverpool, England on Wednesday, ahead of the Rolling Stones’ concert at Anfield Stadium the following day

In the first photo, Jagger can be seen standing next to the Canada Boulevard sign in the city dressed casually in tan jeans with a black coat over a purple-pattered shirt and a gray cap.

‘So long since I’ve been in Liverpool – looking forward to Anfield tomorrow night,’ the legendary frontman, 78, revealed to his 2.5 million Instagram fans and followers, as well as his 2.4 million more on Twitter.

When they do hit the stage at the home of Liverpool F.C., it will be the first time the Stones have played in Liverpool since 1971, according to Liverpool Echo. 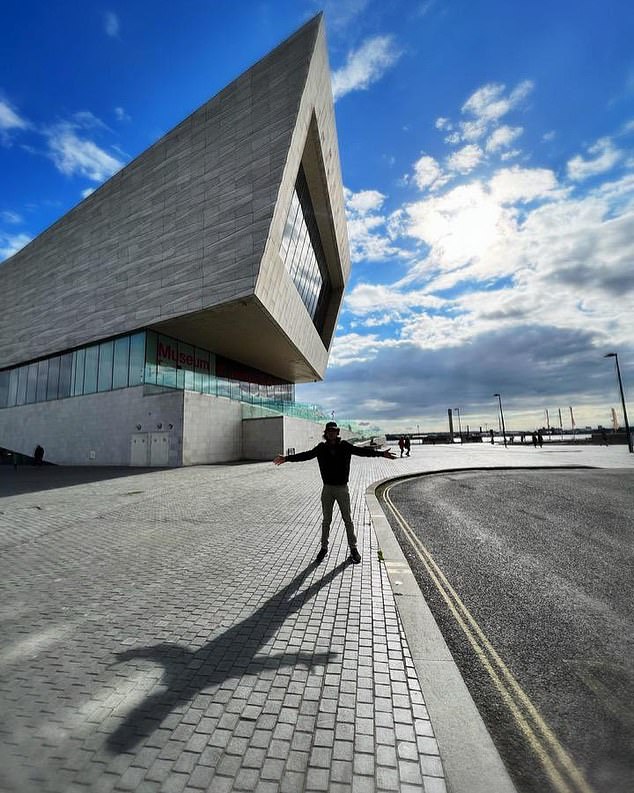 Making the rounds: The legendary Rolling Stones frontman shared six photos taken around the city as his band gets ready to play Liverpool for the first time since 1971 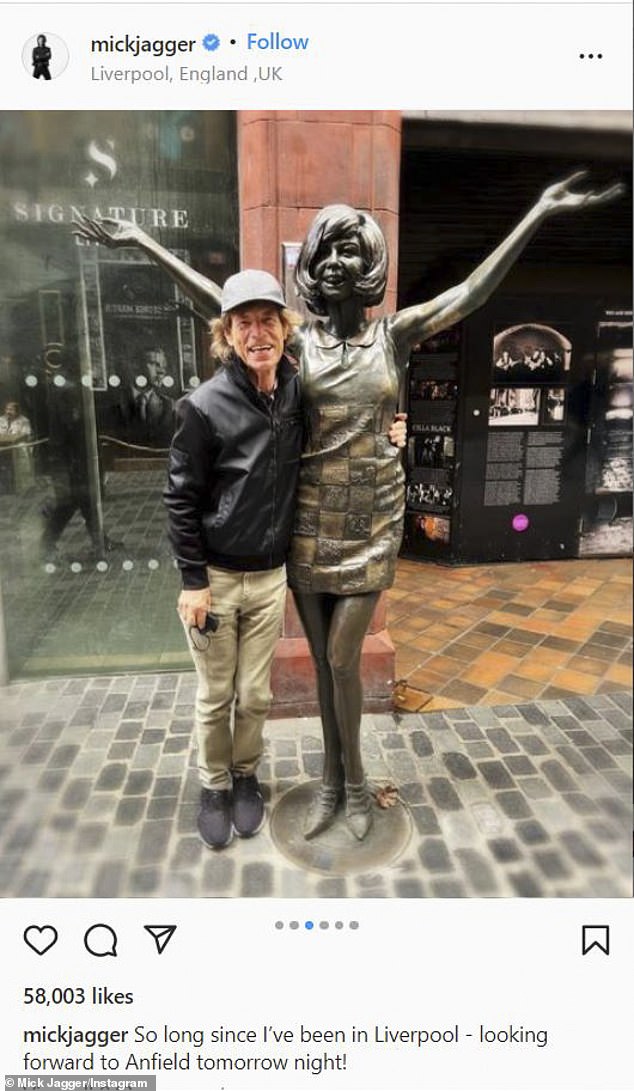 Paying homage: One photo shows the Start Me Up singer-songwriter laughing while he has one arm around a famous statue of late singer Cilla Black on Matthew Street

There’s another image where the Start Me Up singer-songwriter is laughing while he has one arm around a famous statue of late singer Cilla Black on Matthew Street.

With the support of her Liverpudlian friends in The Beatles, Black (born Priscilla Maria Veronica White) began her career with two No. 1 hits in the UK in 1963 – Anyone Who Had a Heart and You’re My World  – en route to 11 top 10 songs by 1971.

Jagger’s adventure through the city also took him to the Empire Theatre, where he point up towards the marquee that’s currently advertising the latest show from Derren Brown, mentalist and illusionist, called Showman.

The last of the six photos shows the Dartford, England native striking a pose on a dilapidated street with trash and graffiti in the backdrop. 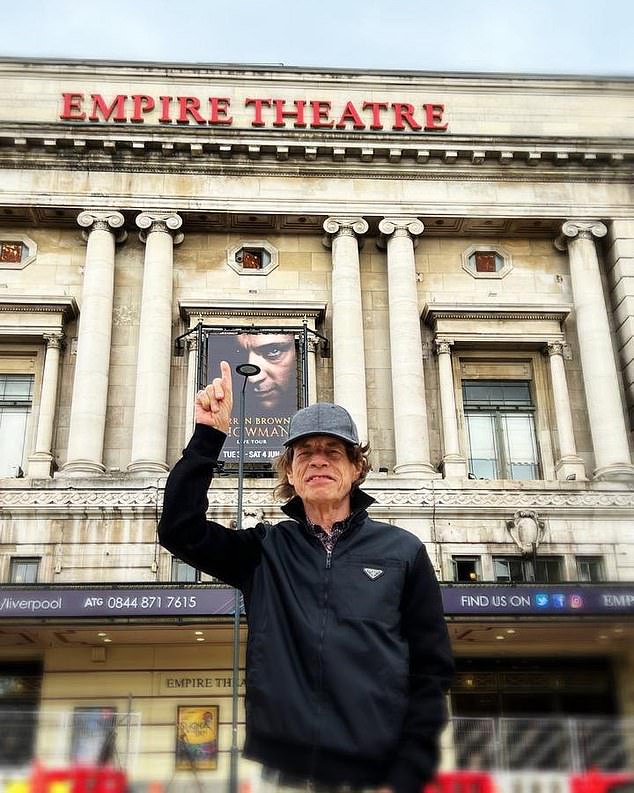 Iconic: Jagger’s adventure through the city also took him to the Empire Theatre 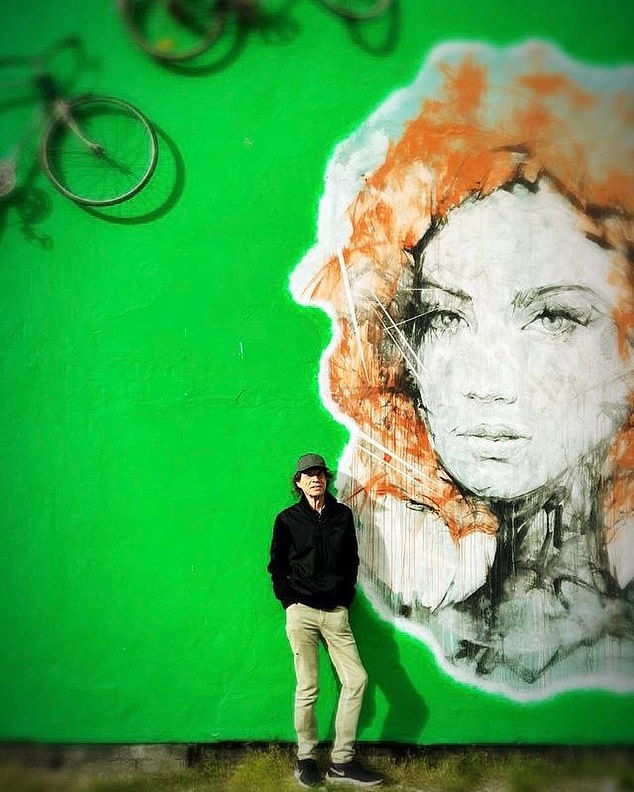 60th anniversary tour: Thursday’s show at Anfield Stadium is part of the Rolling Stones’ summer 2022 European ‘Sixty’ tour that take them through 10 countries

The concert in Liverpool is the third show of the Rolling Stones’ summer European ‘Sixty’ tour.

It kicked off on June 1 in Madrid, Spain with a show at Wanda Metropolitano Stadium, and then went to Munich, Germany, which was held at Olympic Stadium.

The trek will also see them performing two nights at London’s Hyde Park as part of the massive American Express presents BST Hyde Park festival, according to Billboard.

In all, the tour will run through 10 countries and wind down with concert at Friends Arena in Stockholm, Sweden on July 31. 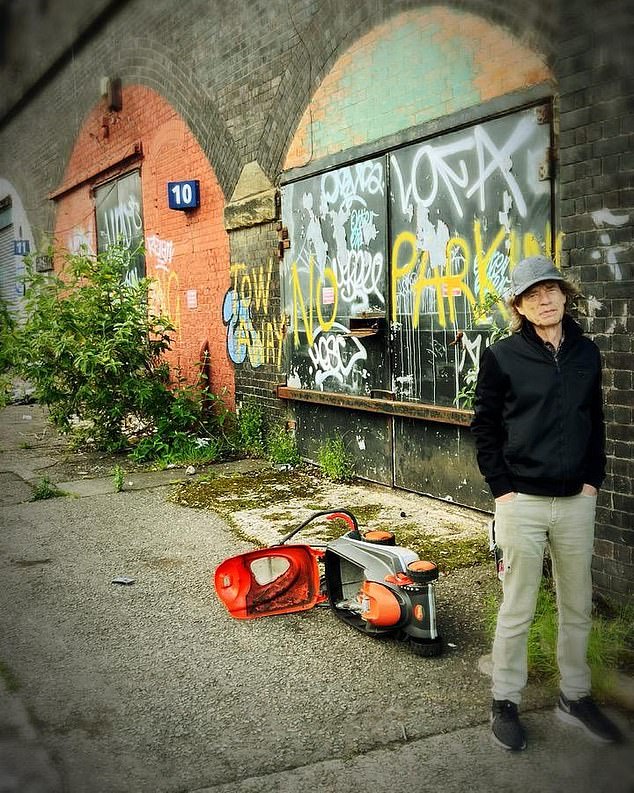 Mick the tourist: The last of the six Liverpool photos shows the Dartford, England native striking a pose on a dilapidated street with trash and graffiti in the backdrop 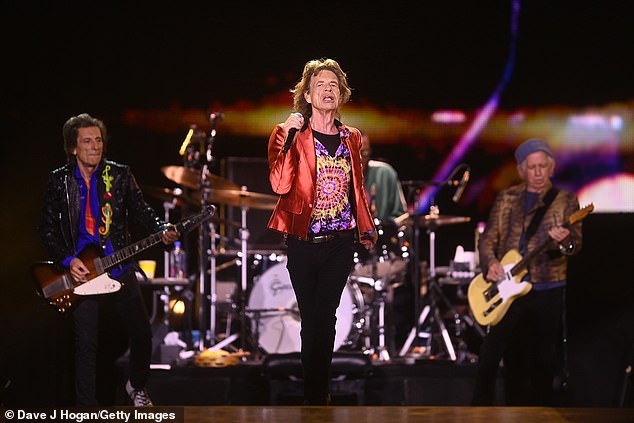 Start them up: Rolling Stones kicked off their ‘Sixty’ tour through Europe with a show in Madrid, Spain on June 1; the trek goes through July 31 with a concert in Stockholm, Sweden; Ron Wood Mick Jagger and Keith Richards are pictured during the concert in Madrid, Spain