Gases inside giant planets like Jupiter and Saturn DON’T react with each other: Microscopic experiments with lasers reveal hydrogen and helium molecules don’t bond under pressure

Experts used advanced laboratory techniques to reveal how hydrogen and helium behave under the extreme pressures found inside such planets.

Pressures inside Jupiter and Saturn’s atmospheres can be more than two and a half million times higher than Earth’s, experts said.

Now researchers have found that the gases do not react with each other within this environment, contradicting previous studies.

Experiments on a microscopic scale have helped scientists shed new light on the chemical make-up of the solar system’s largest planets. This image of Jupiter was taken by the Hubble Space Telescope

The team from the University of Edinburgh team made the discovery by inserting tiny mixtures of hydrogen and helium into a device, known as a diamond anvil cell, used to create very high pressures.

A laser beam was then shone on to the high-pressure mixtures, creating distinct patterns of scattered light that reveal the structure of the molecules in each sample.

Using this technique, known as Raman spectroscopy, the experts found that hydrogen and helium are very unreactive, with no chemical bonds formed between them even under immense pressure. 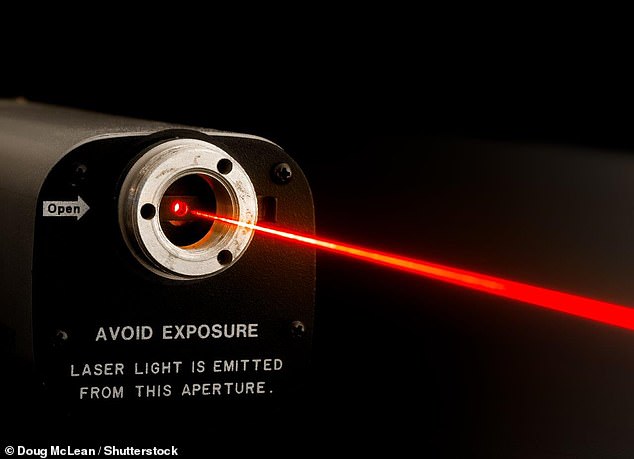 The discovery was made by inserting tiny mixtures of hydrogen and helium into a device, known as a diamond anvil cell, used to create very high pressures. A laser beam was then shone on to the high-pressure mixtures, creating distinct patterns of scattered light that reveal the structure of the molecules in each sample (stock image)

Dr Robin Turnbull, of the university’s School of Physics and Astronomy, who led the study, said: ‘We hope that these results will prompt further investigations into the behaviours of elemental gas mixtures under extreme conditions.

‘It’s important to remain critical of your own work and of the work of others.’

The study, published in the journal Physical Review Letters, also involved researchers at the Centre for High Pressure Science and Technology Advanced Research in China and the Carnegie Institution for Science in the US.

Experts have studied recent evidence gathered from Nasa’s Juno spacecraft to reveal the reason why gases form bands on Jupiter.

Clouds of ammonia at Jupiter’s outer atmosphere are carried along by jet streams to form Jupiter’s regimented coloured bands.

Jupiter’s jet streams reach as deep as 1,800 miles (3,000 km) below Jupiter’s clouds, which are shades of white, red, orange, brown and yellow.

The gas in the interior of Jupiter is magnetised, which researchers believe explains why the jet streams go as deep as they do but don’t go any deeper.

There are also no continents and mountains below Jupiter’s atmosphere to obstruct the path of the jet stream.

This makes the jet streams on Jupiter simpler than those on Earth and cause less turbulence in it’s upper atmosphere.