Ex-Microsoft boss Bill Gates was told by two top executives at the firm to stop sending flirtatious emails to a female employee he had propositioned while he was CEO and married to Melinda Gates more than a decade ago, it has been reported.

The revelation comes just months after Gates’ wife filed for divorce, claiming that the marriage was ‘irretrievably broken.’ The divorce was finalized in August.

Despite the acrimonious end to their marriage, the former couple reunited over the weekend in Westchester County, New York for the wedding of their oldest daughter, 25-year-old Jennifer Gates.

The 2008 emails from Gates were sent to a midlevel employee at the software giant. They were later discovered by Microsoft executives.

Gates was summoned to a meeting by the company’s top lawyer at the time, Brad Smith, and Lisa Brummel, the firm’s most senior human resources executive.

During the meeting, Smith and Brummel told Gates that the emails were inappropriate and that he needed to stop, according to The Wall Street Journal.

Ex-Microsoft boss Bill Gates (seen above in 2008) was told by two top executives at the firm to stop sending flirtatious emails to a female employee he had propositioned while he was CEO and married to Melinda Gates more than a decade ago, it has been reported 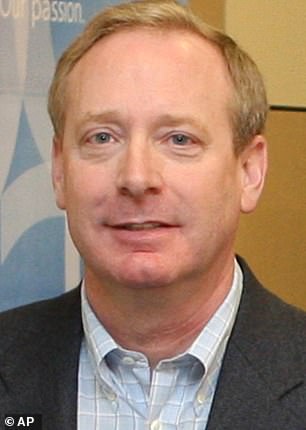 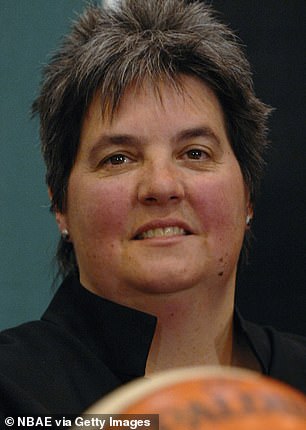 Brad Smith (left), who was Microsoft’s top lawyer at the time, and Lisa Brummel (right), the company’s most senior human resources official, told Gates the emails were inappropriate and that he needed to stop, according to The Wall Street Journal 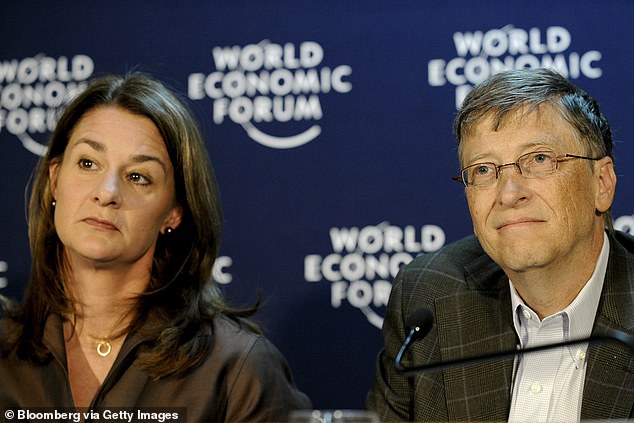 At the time Gates is reported to have sent the emails, he was married to his wife, Melinda Gates (seen left with Bill in 2009)

Gates reportedly agreed to stop corresponding with the woman.

According to the Journal, Smith and Brummel informed the company board of the emails. The board met and determined that no further action was necessary since there wasn’t any physical altercation, according to the report.

A spokesperson for Microsoft told the Journal that the company was made aware of Gates’ emails to the mid-level female employee in 2007 – just months before Gates was set to retire as a full-time employee.

The spokesperson, Frank Shaw, told the Journal that Gates offered to meet the woman outside of work and off campus.

‘While flirtatious, they were not overtly sexual, but were deemed to be inappropriate,’ he said.

Shaw said that the employee never filed a complaint against Gates about the incident.

Bridgitt Arnold, a spokesperson for Bill Gates, told the Journal: ‘These claims are false, recycled rumors from sources who have no direct knowledge, and in some cases have significant conflicts of interest.’

Around the time that Gates’ wife petitioned for divorce earlier this year, news stories began to emerge about the Microsoft co-founder’s penchant for pursuing romantic relationships with female underlings.

There were also several reports about Melinda’s unhappiness over Bill’s friendship with convicted pedophile Jeffrey Epstein.

Earlier this year, it was learned that Gates had an ‘inappropriate’ sexual relationship with a different female staff member in 2002, and resigned while an investigation into the relationship was being investigated by the company board.

The affair came to light after the Microsoft employee wrote to the board in 2019 detailing it – and allegedly asked that Gates’ estranged wife Melinda read the letter.

The letter was seen by Smith, who is currently Microsoft’s president and vice chair, and CEO Satya Nadella.

Gates, 65, quit the board suddenly in March 2020 while the investigation was still underway.

His spokeswoman confirmed there had been an affair almost 20 years ago but said his decision to leave Microsoft’s board was not linked to it.

In 2006, Bill Gates allegedly asked a female Microsoft employee out to dinner in an email after attending a presentation she had given, The New York Times reported.

‘If this makes you uncomfortable, pretend it never happened,’ Gates wrote in the email obtained by The New York Times.

The woman took his advice and pretended it never happened.

A couple of years later, Gates asked out an employee with the Bill and Melinda Gates Foundation.

The report said there was no expectation that the women would suffer professional repercussions for spurning Gates’ advances.

It’s not clear whether Melinda was aware of her husband’s advances.

The Microsoft co-founder and his wife announced in May they were ending their 27-year marriage.

A King County, Washington State Superior Court judge signed the dissolution decree in August. The New York Times reports the court documents didn’t detail how they would divide their assets.

Bill Gates was formerly the world’s richest person and his fortune is estimated at about $132.7billion.

They met after she began working at Microsoft as a product manager in 1987. The two were married in 1994 in Hawaii.

The Seattle-based Bill and Melinda Gates Foundation is the most influential private foundation in the world, with an endowment worth about $50billion.

It has focused on global health and development and US education issues since incorporating in 2000.

The two have said they will continue to work together as co-chairs of their foundation.

However, if after two years Bill and Melinda decide they cannot continue in their roles, Melinda will resign her positions as co-chair and trustee, The Bill and Melinda Gates Foundation announced in August.

If Melinda resigns, Gates would essentially buy her out of the foundation, one of the world’s largest private charitable organizations, and she would receive resources from him to do her own philanthropic work. 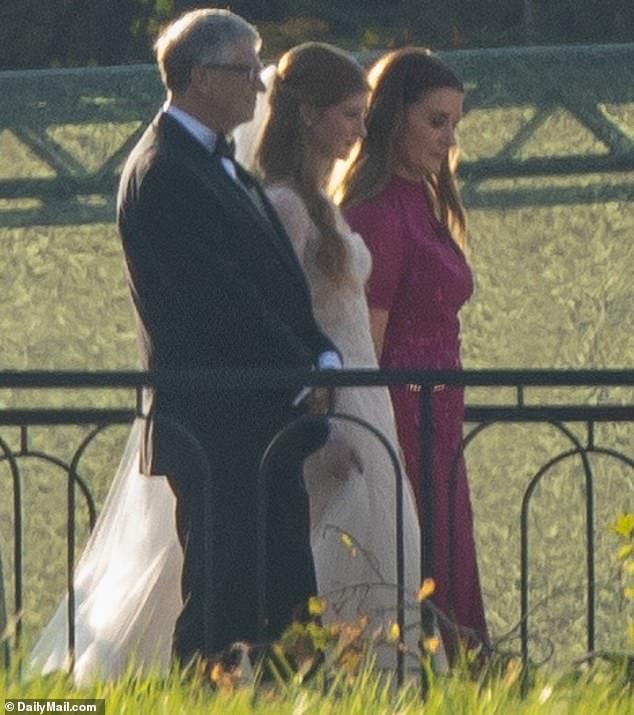 Despite the acrimonious end to their marriage, the former couple reunited over the weekend in Westchester County, New York for the wedding of their oldest daughter, 25-year-old Jennifer Gates (seen second from right in between her parents on Saturday) 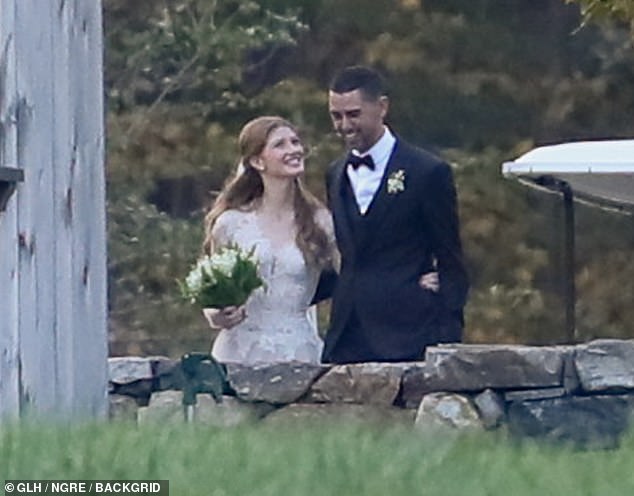 Jennifer Gates poses for photos with her new husband Nayel Nassar as she celebrates her wedding at her 142-acre, $16 million North Salem farm in a reported $2million ceremony

The resources received would be separate from the foundation’s endowment, according to foundation.

In July, it was reported that Bill was on the verge of tears when he told an audience of wealthy business magnates in Idaho that it was his fault the marriage to Melinda ended.

During an ‘off the record’ question-and-answer session at the Allen & Co. conference in Sun Valley, Idaho in July, the New York Post reported that Gates ‘fessed up to messing up.’

‘He basically referred to the fact that it [the divorce] was his fault,’ a source told the newspaper.

The source added: ‘He did seem a bit emotional about it. He might have been on the verge of tears.’

Melinda, who now goes by Melinda French Gates, was also upset at the way allegations of sexual harassment against Michael Larson, one of Gates’ key lieutenants and the manager of his personal fortune, were handled.