Microsoft has just earned the title of the third most valuable company in the world.

The software giant saw its market cap skyrocket to just over $760 billion on Wednesday, making it that much closer to being the world’s most valuable company — a title held by Apple and closely followed by Amazon.

But that doesn’t mean Microsoft has lost out on any bragging rights, however, as its new market capitalization means that it has surged ahead of Google parent company Alphabet, in terms of valuation.

Microsoft is now worth close to $20 billion more than Alphabet, which has a market cap of roughly $744 billion. It’s the first time that such occurrence has happened in three years

Microsoft is now worth close to $20 billion more than Alphabet, which has a market cap of roughly $744 billion.

That’s the first time Microsoft has surpassed Alphabet in valuation in the last three years.

Microsoft and Alphabet have been swapping spots with each other over the last several years, but Microsoft has been helped by renewed focus on cloud computing and artificial intelligence.

In particular, under Microsoft CEO Satya Nadella’s four-year leadership, the firm has shifted its focus away from its aging software and hardware business and towards newer, burgeoning technologies.

Microsoft’s stock price has more than doubled since Nadella took over, according to Fast Company. 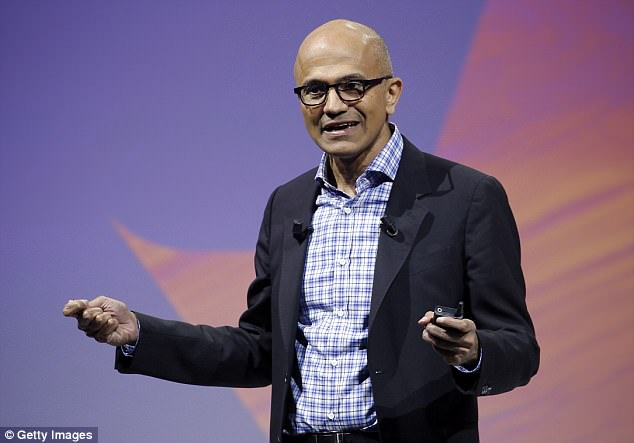 Under Microsoft CEO Satya Nadella’s four-year leadership, the firm has shifted its focus away from its aging software and hardware business and towards newer, burgeoning technologies 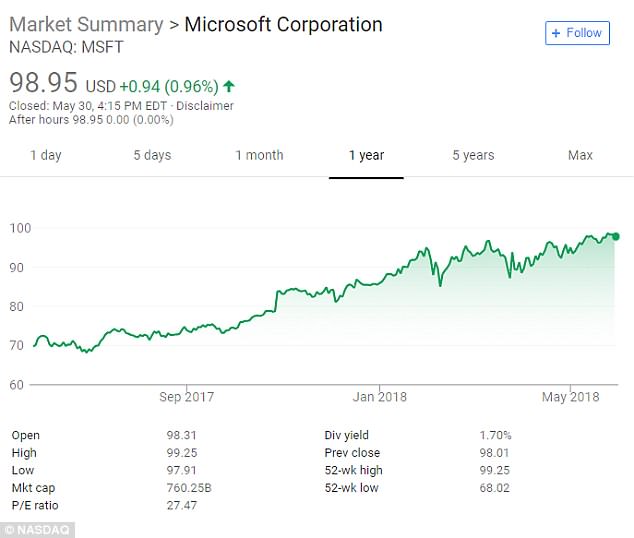 Microsoft saw its market cap skyrocket to just over $760 billion on Wednesday, making it that much closer to being the world’s most valuable a company

That success has made several Wall Street analysts believe that Microsoft could soon reach a $1 trillion market capitalization.

Microsoft, Apple, Amazon and Alphabet have been locked in a race to become the first company to cross the $1 trillion threshold.

As many analysts have pointed out, Microsoft is helped by its diverse revenue pipeline, which spans products like LinkedIn and Office, cloud services and personal computing and gaming.

By comparison, rivals like Apple earn most of its revenue from a mainstay product such as the iPhone, while Alphabet earns most of its profits from advertising.

Still, Apple remains far ahead of its competitors in terms of market capitalization, with a valuation that stands at just over $920 billion.

Apple’s stock has been helped in recent months by glowing comments from legendary investor Warren Buffett and better-than-expected quarterly earnings.

WHAT IS MICROSOFT’S CORTANA?

Cortana is Microsoft’s voice assistant software, which was initially released in 2014.

It can provide answers to some questions and complete basic tasks, and it learns over time to become more useful every day.

There are two ways to use Cortana: you can use voice commands, or you can type out your commands in the Start Menu.

If you choose the former, you may want to enable the ‘Hey Cortana’ feature. With this on, you can say ‘Hey Cortana’ out loud to trigger voice commands without pressing a button.

Here’s how: Search for ‘Cortana settings’ in your Start Menu. Enable the toggle under ‘Hey Cortana.’

Under ‘Respond best’, you can choose ‘to me’ to tailor Cortana to your voice. You’ll need to perform a couple quick exercises to teach Cortana to recognize your voice.

Otherwise, Cortana will work for anyone.