Nextlink Internet and Microsoft are teaming up to bring more than 9 million people in the United States broadband access.

The partnership, announced on Tuesday, is set to focus on those living in Iowa, Illinois, Kansas, Nebraska, Oklahoma and Texas who have been identified as living in ‘underserved’ areas.

Nextlink plans to deploy a range of broadband connectivity technologies to bring these areas under coverage with the goal of extending broadband access to over 3 million people in rural America by July 2022.

‘It’s time to deliver on the connectivity promises that have been made to people across the country, and this partnership will help do that for many who have been left behind and unserved in the heartland of America,’ Shelley McKinley, vice president, Technology and Corporate Responsibility at Microsoft said in a statement.

‘In the past two years with our Airband Initiative, we’ve seen that progress is possible — particularly when the public and private sectors come together.’

‘Partnerships with regional ISPs like Nextlink that have the desire and wherewithal to provide internet connectivity are a critical part of closing the broadband gap and helping families, children, farmers, businesses and whole communities to not only survive, but thrive in the 21st century.’

According to the Federal Communications Commission (FCC), there are more than 21 million Americans without access to the World Wide Web.

The majority of these individuals live in rural areas of the US – approximately 29 million of them reside across Iowa, Illinois, Kansas, Nebraska, Oklahoma and Texas. 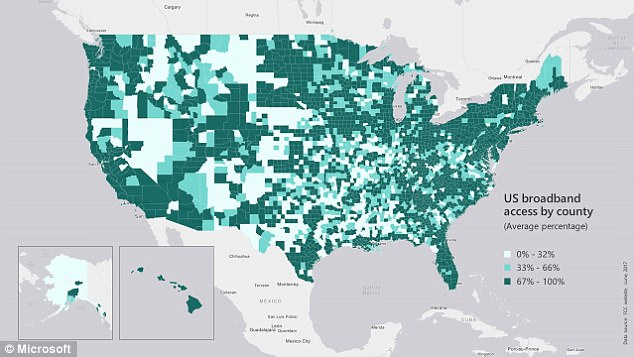 According to the Federal Communications Commission (FCC), there are more than 21 million Americans without access to the World Wide Web. The majority of these individuals live in rural areas of the US

‘This agreement will accelerate the rollout of high-speed broadband access to underserved areas that are desperate for this critical service.’

‘This in turn will make those areas more attractive for employers who require high-speed broadband to operate.

‘By itself, this project is going to generate hundreds of full-time, long-term jobs in rural communities as Nextlink builds out and services the required networks.

‘The overall impact to rural communities in terms of job creation and increased viability for all employers is tremendous.’

The internet provider plans to first begin with deployments in Kansas, Nebraska, Iowa and Illinois, followed by Texas and Oklahoma. 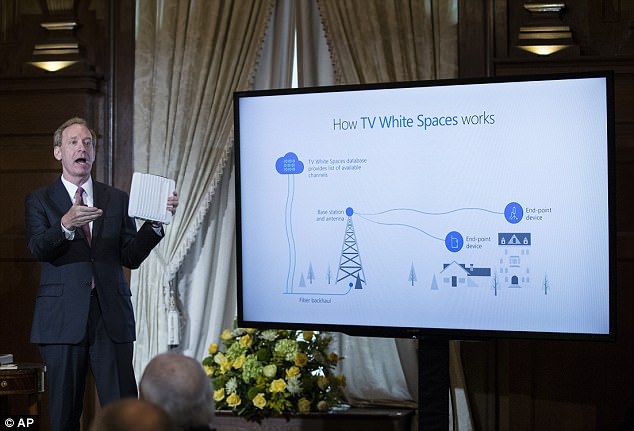 ‘Our experience tells us that advanced broadband access and community support can make these promises a reality in relatively short order.’

It is not just about giving these residents internet, access to broadband has shown to improve an area’s economy, education and opportunities.

Microsoft says the initative could positively impact the farming industry in particular, whose workers could ‘gain access to markets and take advantage of advancements in precision agriculture, enabling them to better monitor crops and increase their yields, which can translate into significant economic returns’.