You may never have to worry about your pesky pet, child or holiday plans interfering in a video conference ever again.

Microsoft has launched a new tool for its workplace chat app, Teams which allows video conference participants to blur their background.

The ‘background blur’ feature is possible due to artificial intelligence, which is able to distinguish between a person’s face and their background.

Microsoft has launched a new tool for its workplace chat app, Teams, which allows video conference participants to blur their background. It uses AI to detect a person’s face

It means employees can remotely tune into video conferences from almost anywhere – whether that’s the beach, a coffee shop or a bathroom – and it’ll go almost entirely undetected.

To demonstrate the new technology, Microsoft used a clip from the infamous ‘BBC Dad,’ which involved a professor being interviewed on live TV, only to be hilariously interrupted by his children, who could be seen getting into trouble in the background of the now-viral clip.

Had the professor been able to use background blur, he may not have suffered from the embarrassing gaff.

‘With Teams, we’re using AI to help people before, during and after a meeting,’ Ron Markezich, corporate vice president of Microsoft 365, told Quartz.

‘Teams delivers a new, more inclusive way of working that keeps people engaged with their teams, whether they’re in the same building or in different cities.’ 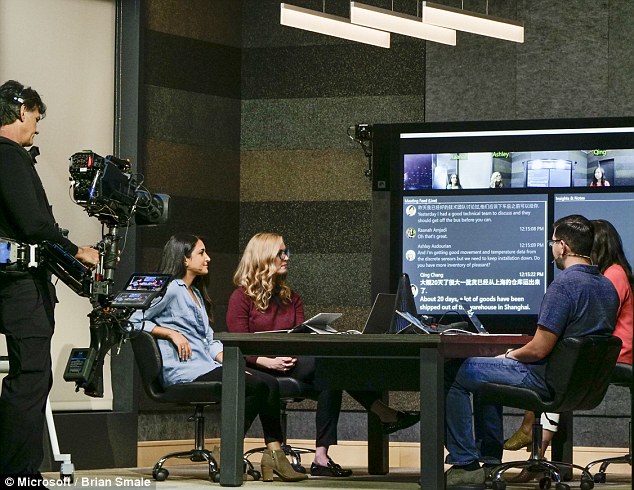 Microsoft is putting its machine learning tech to work with a new tool that will automatically generate real-time transcripts of your meetings, as well as captions on recordings

Background blur is one of several other features Microsoft is launching in an effort to make its workplace products more intuitive.

WHAT IS MICROSOFT TEAMS?

Microsoft has been competing with Slack since introducing Teams in early 2017.

Users have the ability to chat in different groups within a team, which with Slack is known as ‘channels’.

And team members can converse with each other via Direct Messages.

However, what separates the two is that Skype Teams simplifies and organizes message replies.

Called ‘Threaded Conversations’, users can reply to a message in a channel just by clicking the reply button.

The announcements were made at Microsoft’s annual Ignite conference in Orlando, Florida.

Microsoft is putting its machine learning technology to work with a new tool that will automatically generate real-time transcripts of your meetings, as well as captions on recordings.

AI is also coming to Microsoft Office with a new feature called ‘Ideas’ that studies your activity to make helpful suggestions.

For example, it might help users out by suggesting a Powerpoint presentation layout or pick up on interesting data from an Excel spreadsheet.

What’s more, Microsoft wants people to be able to ‘search everywhere,’ so it’s launching Microsoft Search, which uses its Bing search engine to enable users to quickly grab details about other employees from internal software, or relevant information from a Powerpoint presentation. 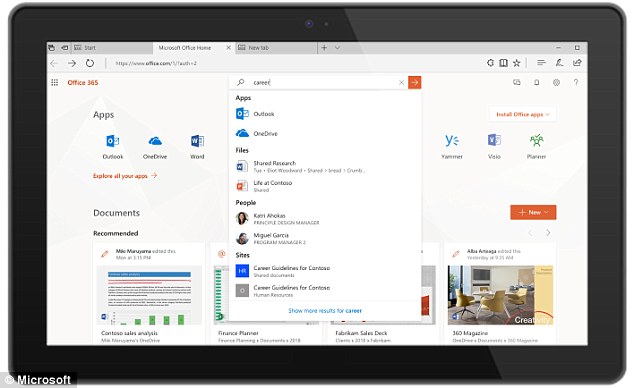 Microsoft Search uses the Bing search engine to enable users to grab details about other employees from internal software, or relevant information from a Powerpoint presentation

Users can type plain-text questions into Microsoft Search and it will send back links to company documents, groups, files and other company intranet sites.

‘We’re putting the search box in a consistent, prominent place across Edge, Bing, Windows, and Office apps, so that search is always one click away,’ Microsoft wrote in a blog post.

‘We’re also supercharging the search box so you can not only quickly find people and related content, but you can also access commands for apps and navigate to other content wherever you need to get work done – even before you start typing in the search box.’ 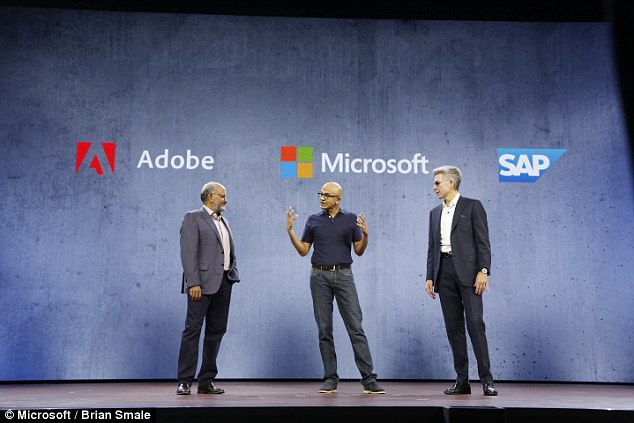 The announcements were made at Microsoft’s annual Ignite conference in Orlando, Florida. In addition to the new Teams tools, Microsoft also shared new details about its Surface Hub 2

Microsoft’s Surface Hub 2 is a 50-inch touchscreen display that now can be tilted and rotated based on the user’s needs. It’s set to be released in mid-2019 with software launching in 2020

Finally, the firm said that the latest version of its Surface Hub whiteboard display, the Surface Hub 2, will hit the shelves soon.

It’s a 50-inch touchscreen display that now can be tilted and rotated based on the user’s needs.

The touchscreen is set to be released in mid-2019, while the accompanying software update that powers many of its new features won’t arrive until 2020.