In 2016, there were 11million people over the age of 65 in this country. By 2030, Government statisticians think that number will hit 16million, almost a quarter of the total predicted population.

Not all these older folk will retire immediately but many will, and even those who do not are likely to work less as they cruise towards full retirement.

Everyone, however, will need money to live so the pressure is on to start saving for later life as early as possible.

Many astute savers use independent financial advisers to help them make the right choices.

And these advisers are increasingly turning to investment platforms – online services that allow users to buy, sell and hold shares and funds.

Individual savers use the likes of Hargreaves Lansdown and AJ Bell, but others are specifically targeted towards advisers.

According to recent figures, advisers hold around £650billion of their customers’ money on platforms and the figure is expected to grow to £1trillion by 2025.

Tatton Asset Management is neatly placed to benefit from this trend. The group works exclusively for independent financial advisers, helping them to create investment portfolios that suit their customers’ needs and sit on digital platforms.

The company is growing fast, chief executive Paul Hogarth is highly ambitious and the shares, at £4.95, should go far.

Hogarth has spent more than three decades in financial services, mostly focused on supporting financial advisers. Having founded his first business, Bankhall, in the 1980s he built it up, sold it on and founded another company,

Paradigm, just before the financial crisis. Paradigm helps advisers to ensure they are compliant with all the latest regulations.

The firm quickly developed a name for top service and over the years, advisers began asking Hogarth if he could do more to help them.

In 2013, he responded by setting up Tatton Asset Management, folding Paradigm into the business but adding a new layer – a range of different investment portfolios that advisers can offer to their customers.

Today, Tatton works with more 650 financial advisers who between them have some 70,000 end-customers. 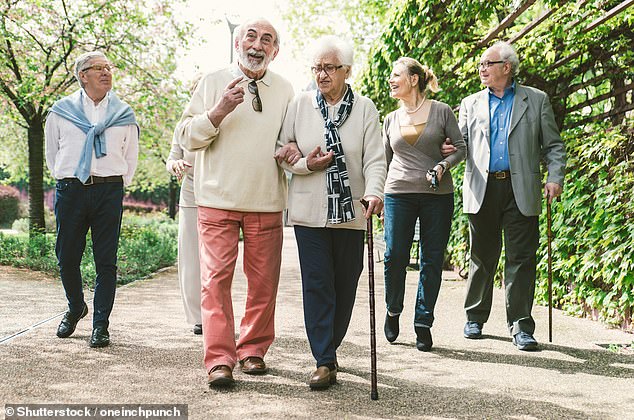 By 2030, Government statisticians think there will be 16million people over the age of 65

These savers can choose from around 45 different portfolios, catering for almost every kind of investment need from ultra-cautious to super-adventurous, with a number of green options thrown in for good measure.

Known as model or managed portfolio services, these investment collections provide elements of bespoke management but at a cut-price rate.

Headquartered in Wilmslow, Cheshire, Tatton was the cheapest on the market back in 2013 and remains highly competitive to this day. Importantly too, the group delivers robust, above-average investment returns and decent service.

The combination has helped Hogarth expand the company consistently over the years, offering rising dividends to shareholders along the way.

Looking ahead, Hogarth intends to go even further, taking assets under management to £15billion over the next three years, through a combination of organic growth and acquisitions.

Several deals are in the pipeline and, such is Tatton’s reputation that most followers believe the group will easily reach its £15billion target and almost certainly exceed it in the coming years.

The more advisers that Tatton works with and the more of their clients’ money that it looks after, the more profitable it should become.

Brokers predict revenues will increase 10 per cent to £25.7million in the year to March 2022, with profits growing from £11.2million to £12.3million. The following year, a 15 per cent increase in profits is forecast, to £14.2million.

Hogarth is the biggest shareholder in Tatton, with an 18 per cent stake in the company. Not only is he motivated to succeed but he also recognises the importance of dividends.

Payments increased almost 15 per cent to 11p in the year to March 2021, even as multiple companies cut or reduced their dividends. Further increases are pencilled in for this year and beyond.

Midas verdict: Tatton is a well-run business in a growing market. The group has made strong progress in recent years, the pace of growth is accelerating and Hogarth’s own stake provides reassurance. At £4.95, the shares are a buy.