The number of over-65s being treated for alcohol abuse has soared nearly five-fold in little more than a decade.

It comes as middle-aged Britons replace the young as the nation’s problem drinkers, according to Public Health England data.

Experts warn that the ‘baby boomer’ generation is in denial over alcohol, with dementia, cancer and liver disease on the rise as a result.

Experts warn that the ‘baby boomer’ generation is in denial over alcohol, with dementia, cancer and liver disease on the rise as a result (stock image)

Teenagers used to be considered Britain’s biggest drinkers, but experts are now more worried by middle-aged shoppers who order wine from supermarkets and consume it at home every day.

Dr Tony Rao of the Royal College of Psychiatrists said older drinkers tend not to accept they have a problem.

‘There is a huge amount of denial,’ he said. ‘Whereas millennials and younger groups are more likely to make healthy choices, the older age groups are aware of the problems but they are not willing to make changes to their lifestyles.’ 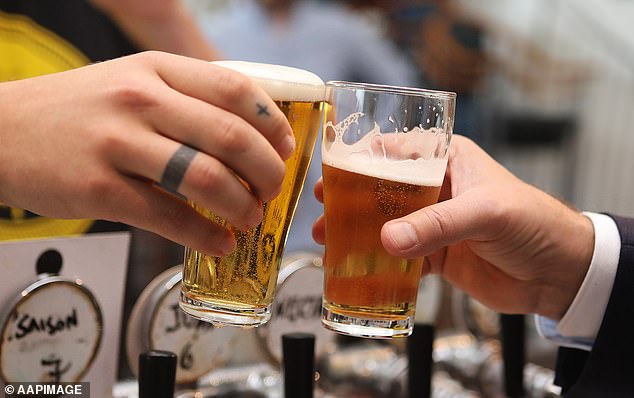 Alcohol treatment for the youngest groups has, by contrast, dropped – by 30 per cent for under-20s, and 8 per cent for those aged 20 to 24.

Modern trends have also seen younger Britons turning away from alcohol, he noted. ‘Peer pressure is much less strong in young people now,’ he said. ‘But with older groups socialising tends to involve alcohol.’

Katherine Severi, chief executive of the Institute of Alcohol Studies, said: ‘The baby boomer generation have become one of the most vulnerable sections of society in terms of harm from alcohol. They are drinking more frequently and in greater quantities than their parents and are subsequently faced with greater rates of liver disease, cancer and mental health problems.

‘Over the years efforts to tackle Britain’s alcohol problem have been focused on teenage binge drinkers in our towns and city centres… what goes on behind closed doors can potentially be far more damaging to health and create a greater burden in the long term for the NHS.’

The PHE figures also show the middle-aged are increasingly being treated for drug addiction. The number of over-65s in treatment for cannabis has risen eight-fold, while the figure has tripled for cocaine abuse.