Middle classes in south of England were to blame for stockpiling during coronavirus crisis, Tesco boss claims as panic buying sent sales soaring by a third

Tesco has blamed southern middle class people for the bulk of panic-buying during the coronavirus crisis.

The supermarket has revealed that stockpiling has been less of an issue outside the south of England.

It comes after billion spent on groceries saw spending top that of Christmas. The retail giant’s sales jumped by almost a third, with Londoners hoarding most goods, the Daily Telegraph reports. 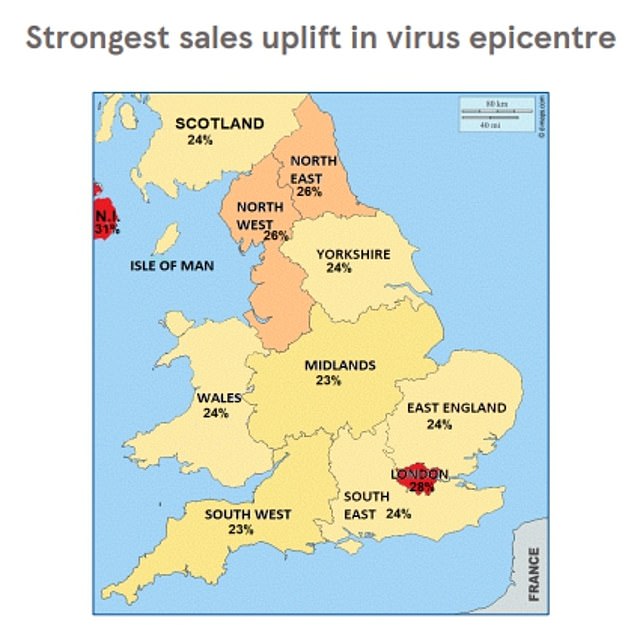 Pictured: A map released by Tesco showing that London was the epicentre of panic buying, with hotspots also in the north-west and north-east 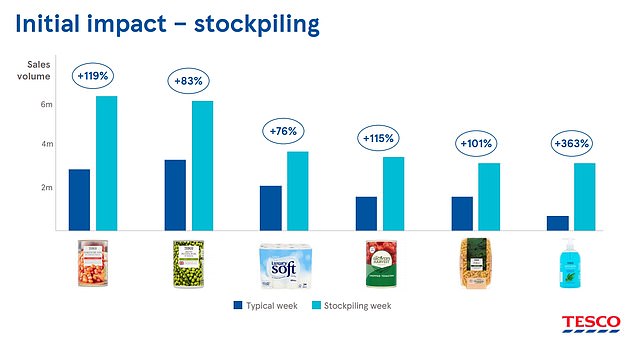 Chief executive Dave Lewis said: ‘These buyers tend to be more affluent customers, and whilst we saw uplifts everywhere, the biggest uplifts were in the south of England.

‘We saw some very interesting behaviours in the stockpiling, and these behaviours informed some of the decisions we have taken.’

It comes after Iceland Foods boss Richard Walker said last month: ‘Not everyone can afford to stockpile.’

Tesco is still unable to meet demand for deliveries to people’s homes despite the supermarket increasing delivery slots by a fifth. 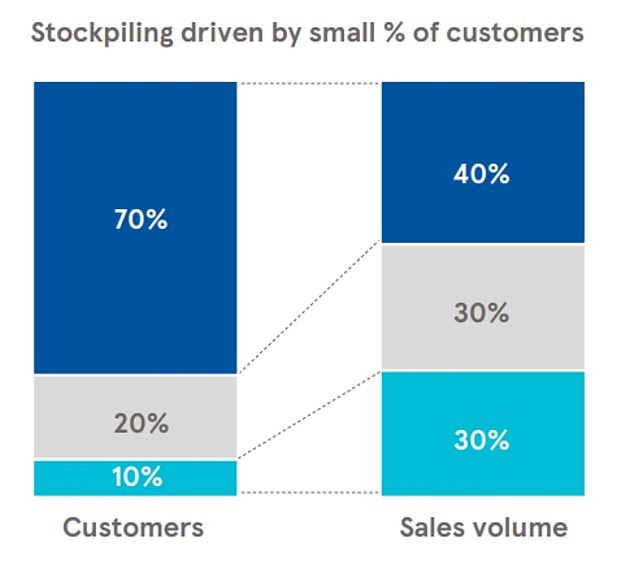 The stockpilers are represented by the light blue blocks in the the chart above. It shows that the 10 per cent of customers who were panic buyers were responsible for 30 per cent of sales

Those buying online in recent weeks have faced hours’-long booking queues and faced waiting a month for their delivery.

Yesterday Waitrose urged customers to do their shopping in stores if they are able in order to prioritise people who can’t leave home for their online shopping.

But panic buying has begun to tail off at Tesco, with the drop in purchases coming as the country went into lockdown.

At the peak of panic buying, Tesco sold 3.1million bottles of liquid soap, which is four times more than normal.

It sold double the number of tinned tomatoes – 3.3million – and 76 per cent more toilet roll packs at 3.6million. Sales of beans also doubled to his 6million.

Mr Lewis said panic buying was down to a minority of customers, with 10 per cent buying a third of goods.

Morrisons, meanwhile, is partnering with takeaway firm Deliveroo to allow customers to order up to 70 essential items which can arrive in as little as 30 minutes for a £4.99 fee.