Even with nine men Wolves made it look easy and that is why they will be celebrating promotion to the Premier League come the end of the month.

Indeed, they could be up as early as April 11 if they win their next three matches. They were coasting to victory here after first-half goals from Portuguese pair Helder Costa and Ivan Cavaleiro.

But, as if to further demonstrate their superiority, they had Ruben Neves and Matt Doherty sent off after the break and still strode with comfort to a deserved three points. 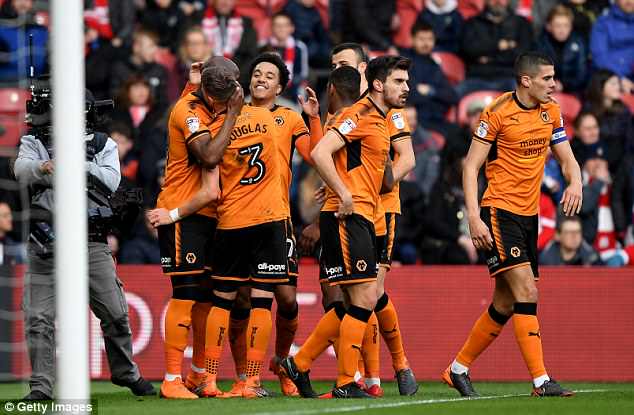 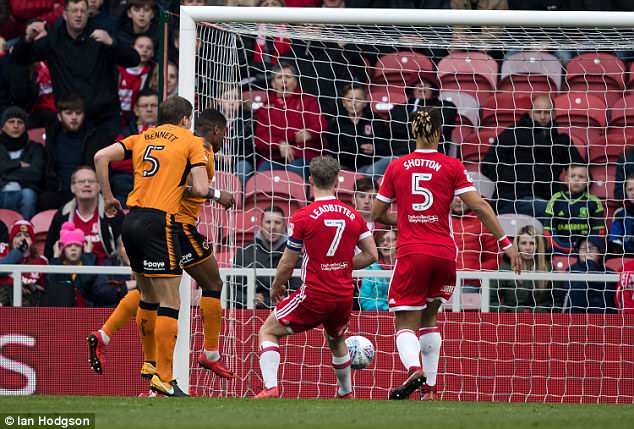 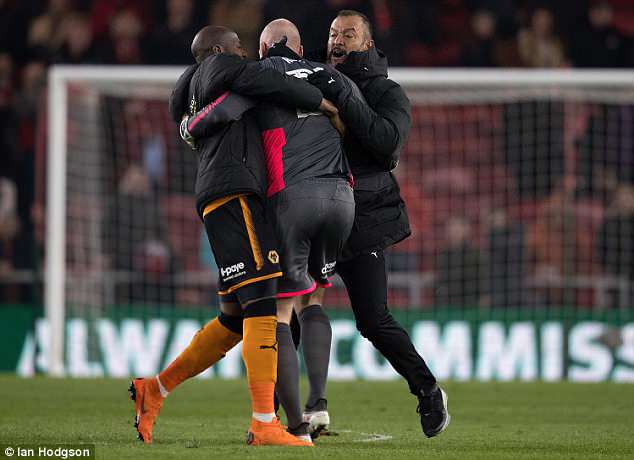 Rivals have criticised the Chinese-owned Wanderers in recent weeks, accusing them of buying the league with the help of agent Jorge Mendes. But surely they should be applauded for utilising contacts and investing wisely?

On this evidence the current side would make a fist of top-flight survival even without a summer splurge, although we should expect another busy window and ambitious moves influenced by Mendes. Good for them, they will be an exciting addition to the Premier League.

For all of that, they did not start well last night. In fact, their supporters kept the ball better than they did early on, passing it around the away end and causing a 60-second delay as Boro’s George Friend pleaded for it to be returned.

But perhaps that impromptu possession play served as inspiration for the visitors, for they were irresistible during the final 15 minutes of the first half.

Their opener, on 32 minutes, owed as much to the tenacity of Cavaleiro – who recycled a loose ball inside the area – as it did the classy finish of Costa, volleying home first time from a Barry Douglas dink to the far post. 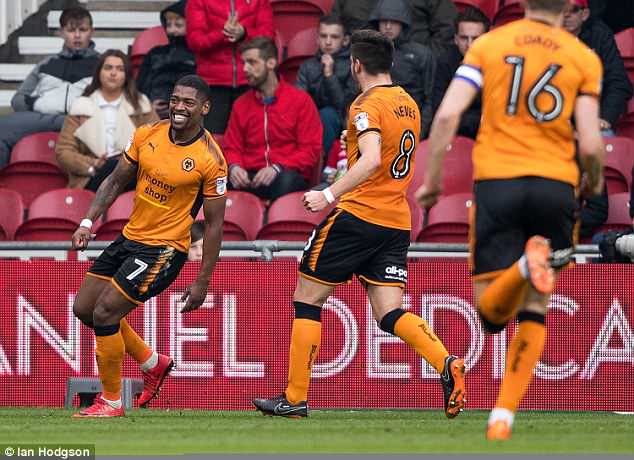 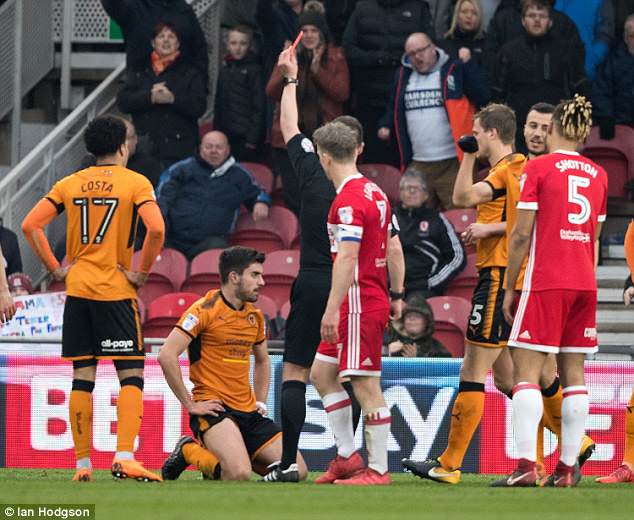 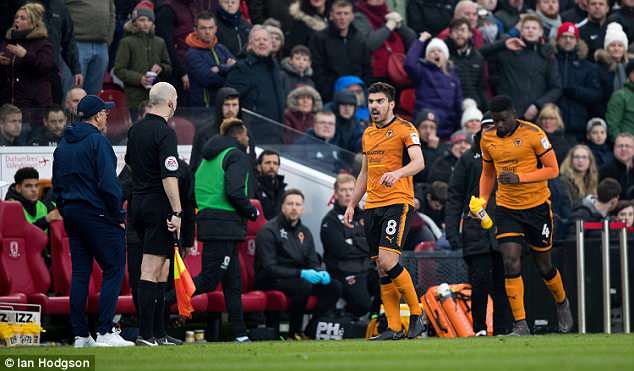 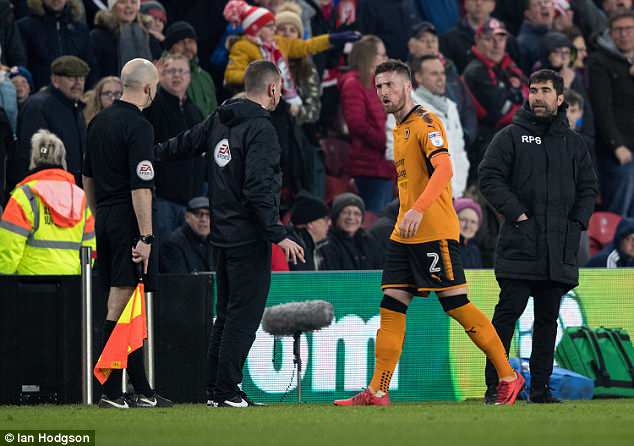 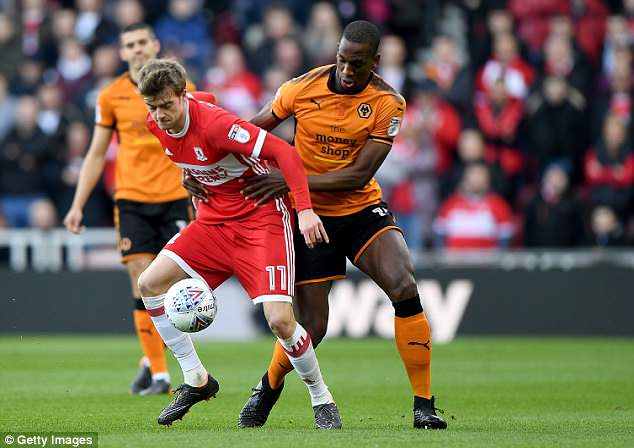 Patrick Bamford volleyed in a consolation for Middlesbrough but it was too little, too late

Neves was by some distance the best player on the pitch – as you’d expect for a Portugal international who captained Porto in the Champions League aged 18 – and he twice went close with dipping efforts from range.

The second of those forced a corner when Darren Randolph shovelled over the crossbar and from that flag-kick Wolves had their second. Douglas delivered, Willy Boly headed on goal, Randolph saved and Cavaleiro nodded in the rebound.

And it looked like Wolves were about to make sure of their victory on 53 minutes when Neves dissected the Boro backline with a pass from inside his own half and Costa scampered clear. Friend gave chase and appeared to make slight contact with the forward, who tumbled to the turf. Red card? Not even a free-kick. Costa was through on goal but was not given a penalty, despite being caught by George Friend 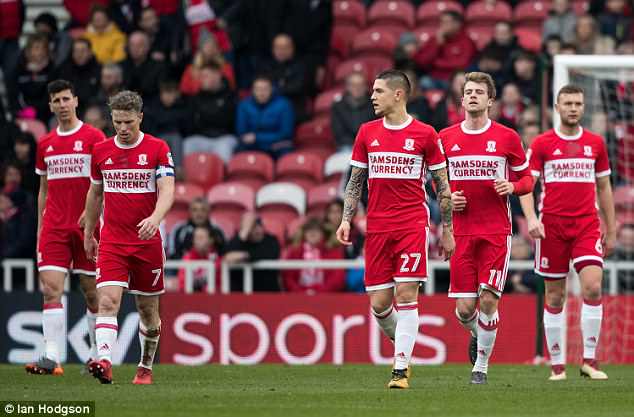 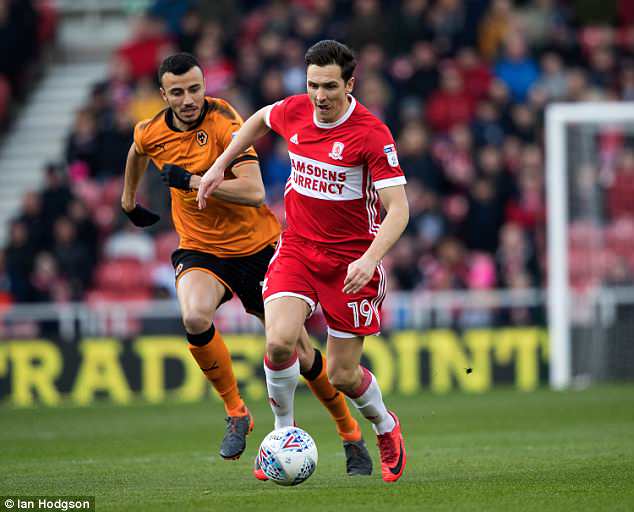 The Wolves bench protested and they had barely returned to their seats by the time Boro broke and both Neves and Doherty were booked for two challenges in attempting to halt the charge of Adama Traore. Within 90 seconds Neves was off, sliding recklessly to topple Friend and staining an otherwise outstanding performance.

Doherty joined him on 72 minutes when his elbow clattered into Friend as they challenged for a dropping ball. No need for VAR here, referee Stuart Atwell had got both dismissals spot on.

Boro pulled one back in the fourth minute of stoppage time when Patrick Bamford volleyed in, but it was too little, too late.