This is the moment two dwarfs attack a man who was allegedly taking photos of them on a New York subway train – although some viewers are convinced it was staged.

The altercation was filmed on the Q train approaching Canal Street, with commuters looking on as the fight broke out.

The clip was shared on Instagram by an account that seems to belong to one of the dwarfs, who lives in Miami, Florida.

In the clip, the dwarfs can be seen challenging the man for taking pictures of them before leaping on him, despite the efforts of fellow passengers to restrain them.

At the start of the footage, one of the dwarfs ask the man why he is taking photos of them.

They get involved in an argument as the man seemingly denies taking photos of the two dwarfs.

The dwarf can be heard telling the man not to take photos ‘just because they are little’.

At the start of the clip, the two dwarfs can be seen arguing with the man, accusing him of taking photos of them

After going back and forth for a few moments, other passengers can be heard supporting the dwarfs and telling the other man off for apparently taking photos.

The exchange then turns violent as the dwarfs leap on the man, tackling him near the doors of the train.

They are restrained by other passengers, including one much larger man who tells them to calm down. 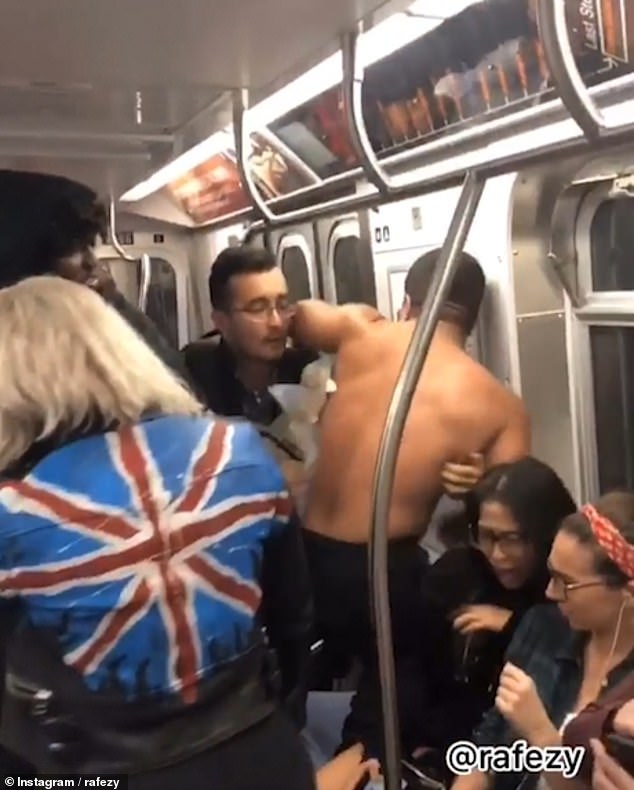 The man repeatedly denies taking pictures and after a heated exchange the dwarfs attack him, causing other passengers to try and restrain them

Eventually, one dwarf rips off his t-shirt and they both continue to try and get to the man who apparently took photos of them.

However, many people have cast doubt on the footage and even accused the dwarfs of staging the situation, especially as the clip was shared to one of their Instagram accounts.

One viewer asked: ‘Is this for real?’

The video has been viewed more than 5,000 times since it was uploaded.