Two breached dams caused by several days of rainfall and rising water on Tuesday forced the evacuation of about 10,000 people in mid-Michigan, where the governor said one downtown could be ‘under approximately 9 feet of water’ by morning.

For the second time in less than 24 hours, families living along two lakes and a river were ordered Tuesday to leave home.

The evacuations in Michigan followed days of heavy rains in parts of the Midwest that also brought flooding to Chicago and other parts of Illinois, Ohio and other states.

The National Weather Service issued a flash flood watch for locations along the Tittabawassee River after the breach at the Edenville Dam in Midland County, about 140 miles (225.31 kilometers) north of Detroit and the Sanford Dam, about seven miles (11.26 kilometers) downriver from Edenville.

MICHIGAN: A view of a dam on Wixom Lake in Edenville, Michigan, Tuesday. People living along two mid-Michigan lakes and parts of a river have been evacuated following several days of heavy rain 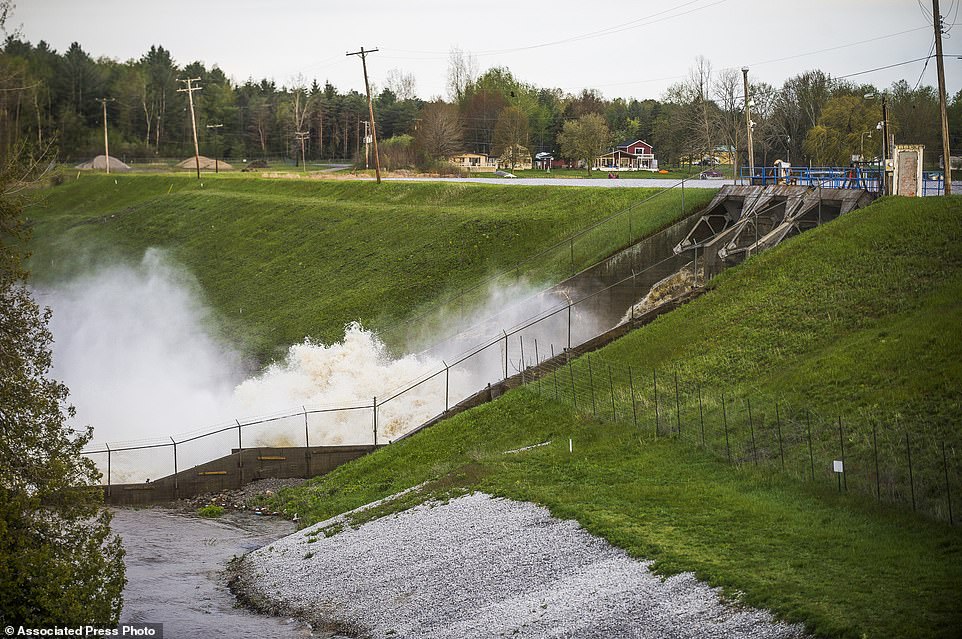 MICHIGAN: Water rushes through the Edenville Dam. The National Weather Service issued a flash flood watch for locations along the Tittabawassee River after the breach at the Edenville Dam in Midland County, about 140 miles (225.31 kilometers) north of Detroit

‘Extremely dangerous flash flooding is ongoing along the Tittabawassee River in Midland county due to catastrophic dam failures at the Edenville and Sanford dams,’ the weather service said on its website, noting that anyone near the river should seek higher ground immediately, be prepared for immediate evacuations, and not drive into flooded roadways. ‘This flooding will continue all along the length of the river in Midland county, and possibly extending into Saginaw county where a Flash Flood Watch is also in effect.’

Michigan Gov. Gretchen Whitmer late Tuesday declared a state of emergency for Midland County and urged residents threatened by the flooding to evacuate the area. She said shelters have opened across the county and are available to residents who need a place to go.

‘This is unlike anything we’ve seen in Midland County,’ she said. ‘If you have a family member or loved one who lives in another part of the state, go there now.’

Whitmer said downtown Midland faced an especially serious flooding threat. ‘In the next 12 to 15 hours, downtown Midland could be under approximately 9 feet of water. We are anticipating an historic high water level.’

Emergency responders went door-to-door early Tuesday morning warning residents living near the Edenville Dam of the rising water. Some residents were able to return home, only to be told to leave again following the dam’s breach. 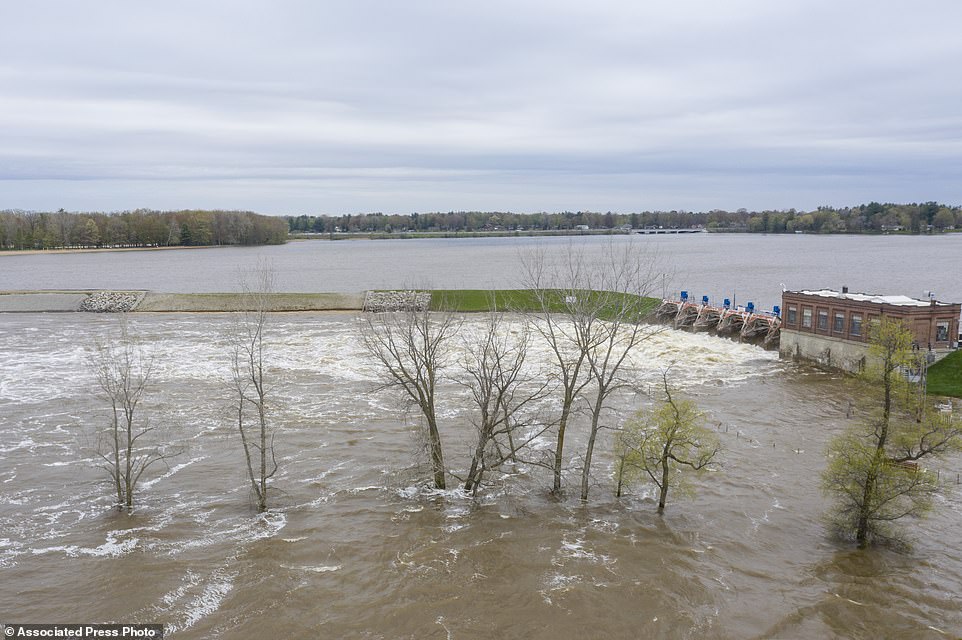 MICHIGAN: A view of the flooded area near the Sanford Dam on Tuesday. ‘Extremely dangerous flash flooding is ongoing along the Tittabawassee River in Midland county due to catastrophic dam failures at the Edenville and Sanford dams,’ the weather service said on its website 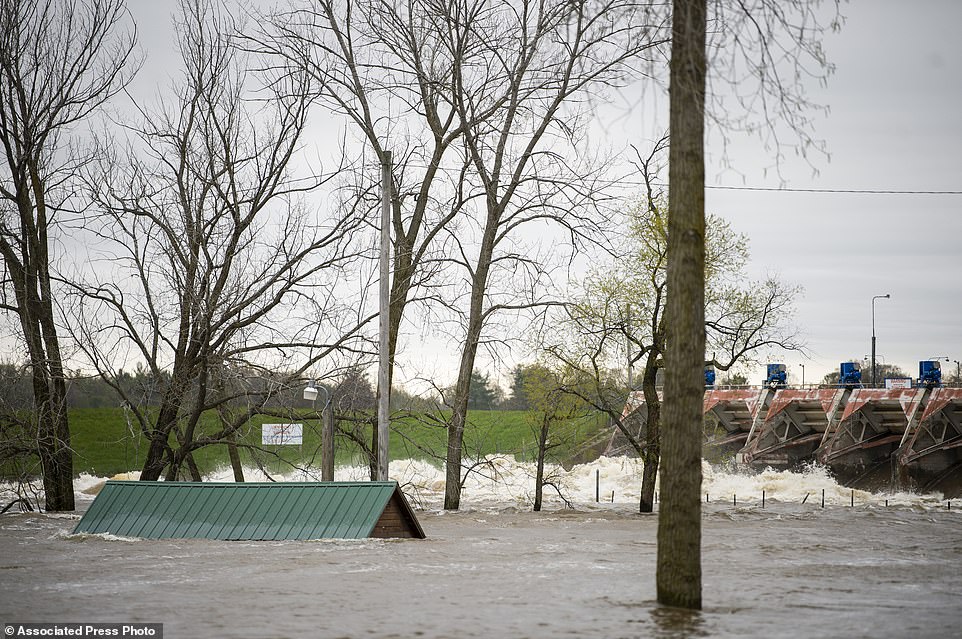 MICHIGAN: The evacuations include the towns of Edenville, Sanford and parts of the city of Midland, which has 42,000 people, according to Selina Tisdale, spokeswoman for Midland County. Flooding by the Sanford Dam

The evacuations include the towns of Edenville, Sanford and parts of the city of Midland, which has 42,000 people, according to Selina Tisdale, spokeswoman for Midland County.

‘People are communicating well and looking after each other and their loved ones,’ Tisdale said. ‘We´re heartbroken for those with lots of home and property damage.’

Edenville Dam holds back Wixom Lake. Officials also were watching the Sanford Dam south of Edenville. The city of Midland, which includes the main plant of Dow Chemical, sits on the banks of the Tittabawassee River about 8 miles (12.87 kilometers) away from that dam.

Dow Chemical Co. has activated its emergency operations center and will be adjusting operations as a result of current flood stage conditions, spokeswoman Rachelle Schikorra said in an email. 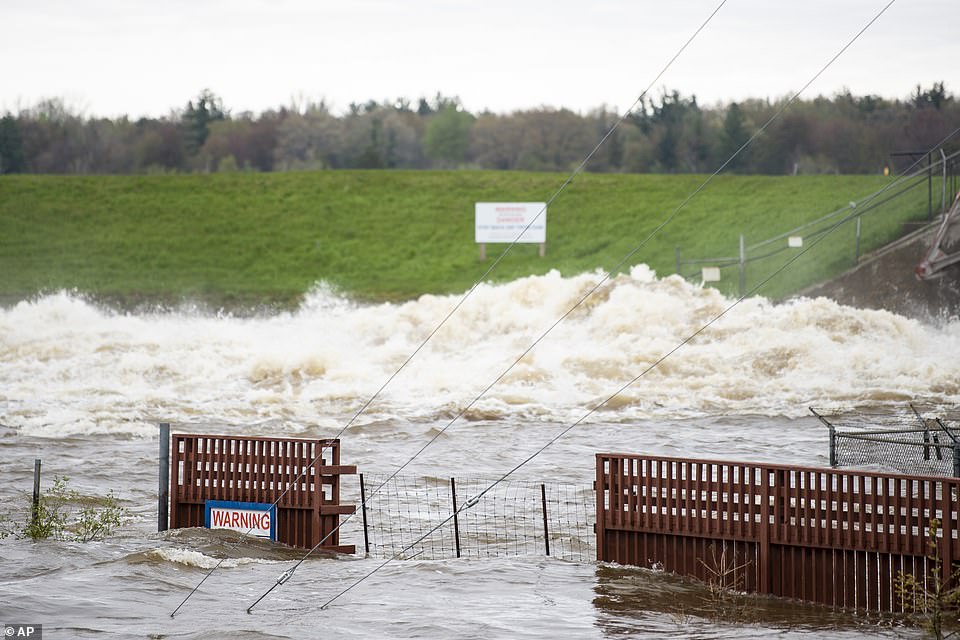 MICHIGAN: Sanford Dam in Midland County, Michigan is pictured. Officials can not contain the amount of water spilling over its gates 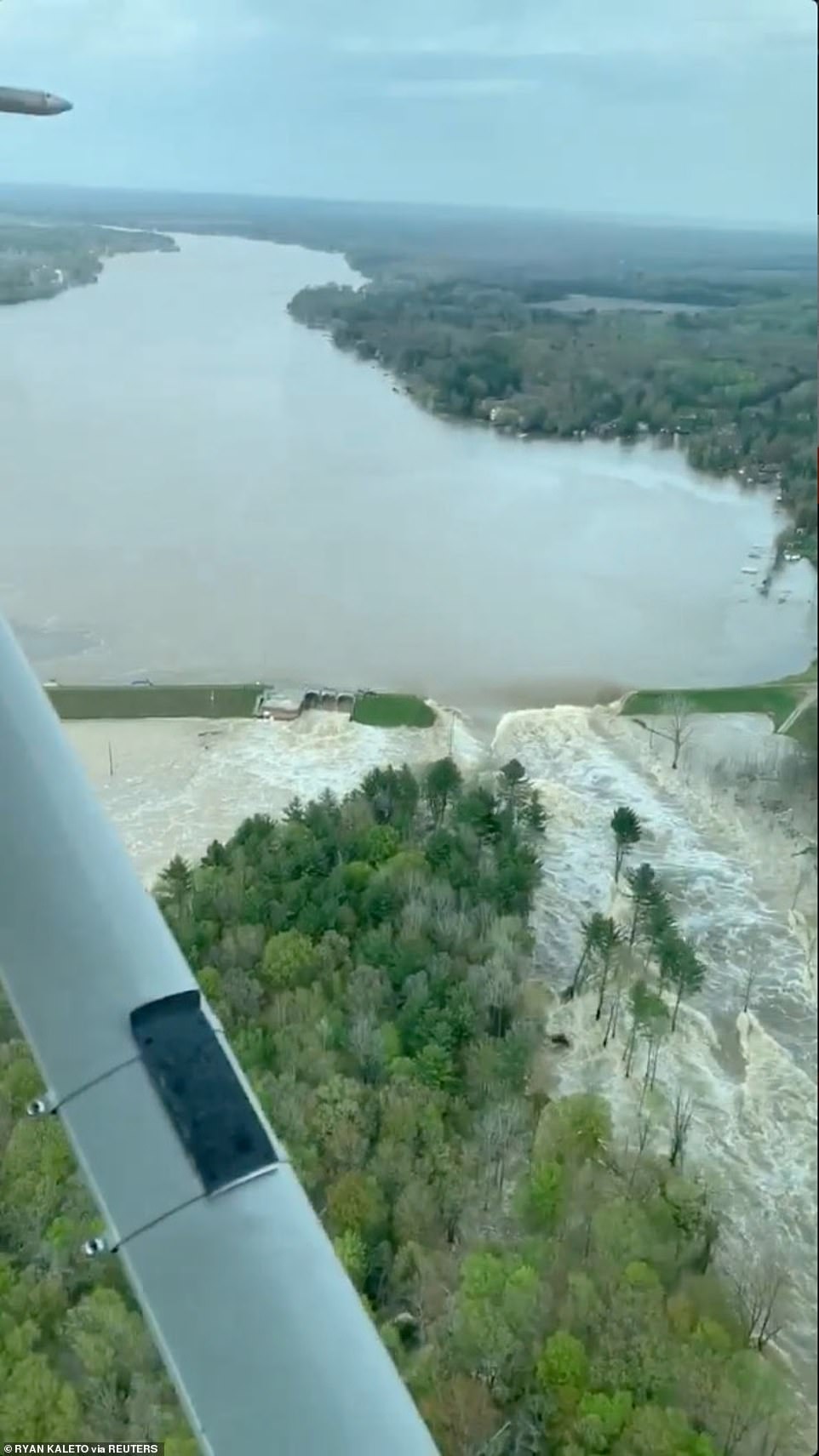 MICHIGAN: Aerial view of water from a broken Edenville Dam seen flooding the area as it flows towards Wixom Lake in Michigan

‘Dow Michigan Operations is working with its tenants and Midland County officials and will continue to closely monitor the water levels on the Tittabawassee River,’ Schikorra said.

Earlier, Midland County 911 sent out a series of alerts saying the Edenville and Sanford dams were at risk of failing.

Midland County Emergency Management later said that the dams were ‘structurally sound.’ It said water flowing through the dam spillgates couldn’t be controlled, however, so evacuation measures remained in place.

In 2018, the Federal Energy Regulatory Commission revoked the license of the company that operated the Edenville Dam due to non-compliance issues that included spillway capacity and the inability to pass the most severe flood reasonably possible in the area. 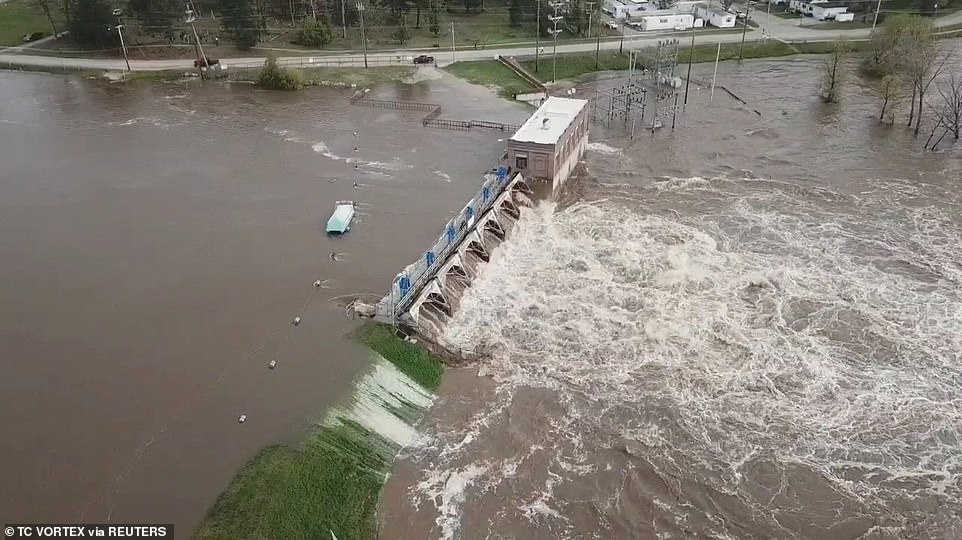 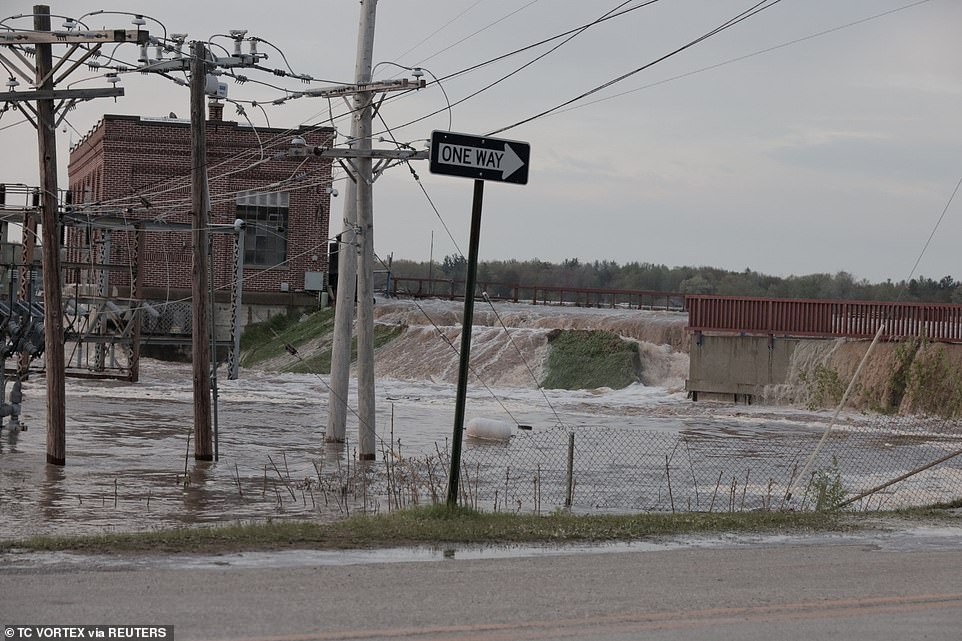 Both dams are in the process of being sold.

There were 19 high hazard dams in unsatisfactory or poor condition in Michigan in 2018, ranking 20th among the 45 states and Puerto Rico for which The Associated Press obtained condition assessments.

Two area schools had been opened Tuesday morning after the initial evacuation, but people who had been at one of the schools left by early afternoon.

Tuesday’s evacuation alert in Michigan was labelled as ‘urgent’  and the threat level considered extreme, with an ‘extraordinary threat to life or property.’ 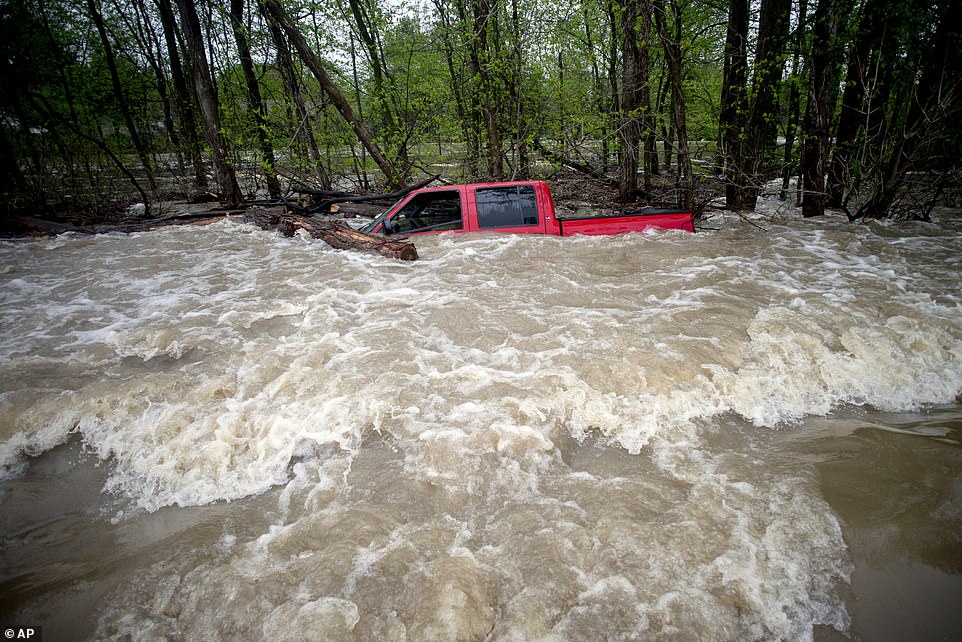 MICHIGAN: The Midwest has been hit by heavy flooding, with residents in one Michigan county forced to evacuate their homes amid fears of ‘imminent dam failure’. The driver of this  red pickup truck was rescued in Saginaw County, Michigan on Tuesday 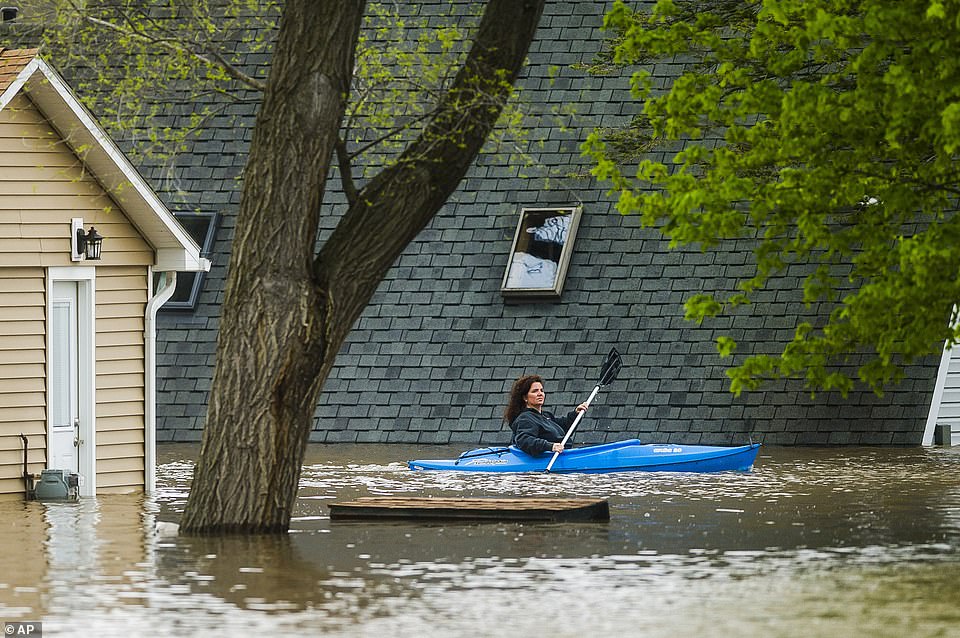 MICHIGAN: A resident in Midland County, Michigan is pictured kayaking down the street. Homes were evacuated the threat level considered extreme, with an ‘extraordinary threat to life or property’

More than 50 roads in Midland County have now been closed.

‘We were back at home and starting to feel comfortable that things were calming down,’ said Catherine Sias, who lives about 1 mile (1.61 kilometers) from the Edenville Dam and left home early Tuesday morning. ‘All of a sudden we heard the fire truck sirens going north toward the dam.’

Sias, 45, said emergency alerts then began coming on her cell phone and people started calling to make sure they were safe.

‘While packing, there were tons of police and fire trucks going up and down the roads,’ she added. ‘As far as I know, all of our neighbors got out.’

M-30, the state highway trunkline that’s also the main road through Edenville and the route Sias was using to evacuate, was backed up with vehicles.

While driving, she saw the rushing Tittabawassee River. ‘It was very dramatic, very fast and full of debris,’ she said.

Meanwhile, other residents went to shelters set up in area schools.

‘We were laying in bed when I heard sirens,’ local Jon St. Croix told the Midland Daily News. 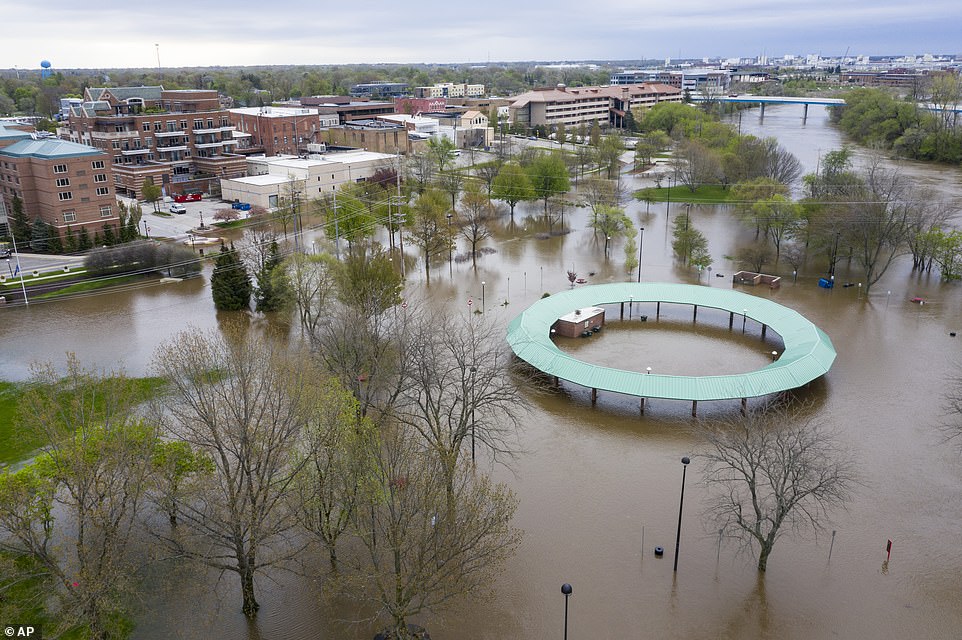 MICHIGAN: The Midland Area Farmers Market is pictured after flooding on Tuesday 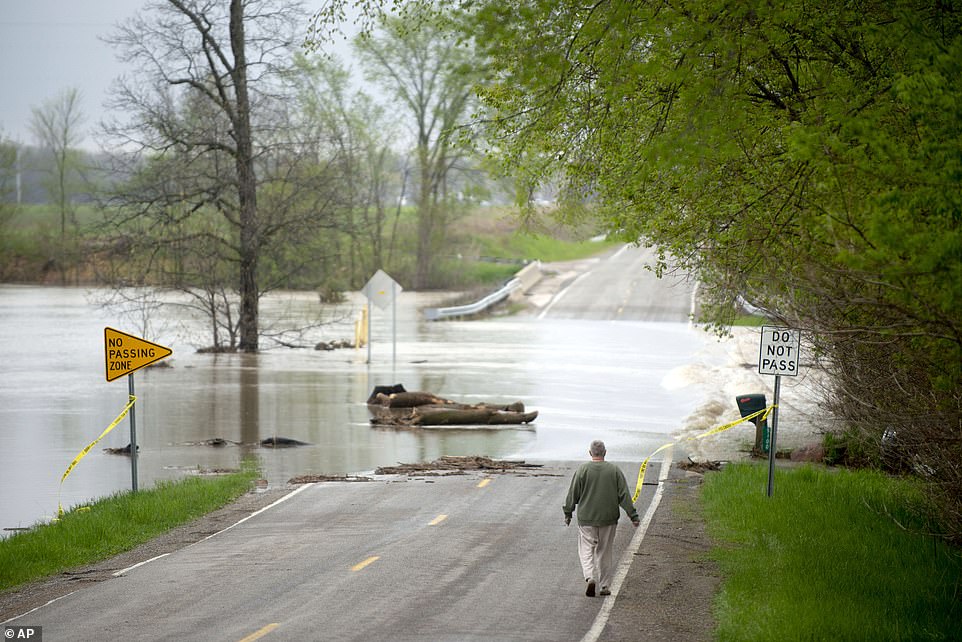 MICHIGAN: A resident looks on at a deluge of water in Saginaw County, Michigan Tuesday morning 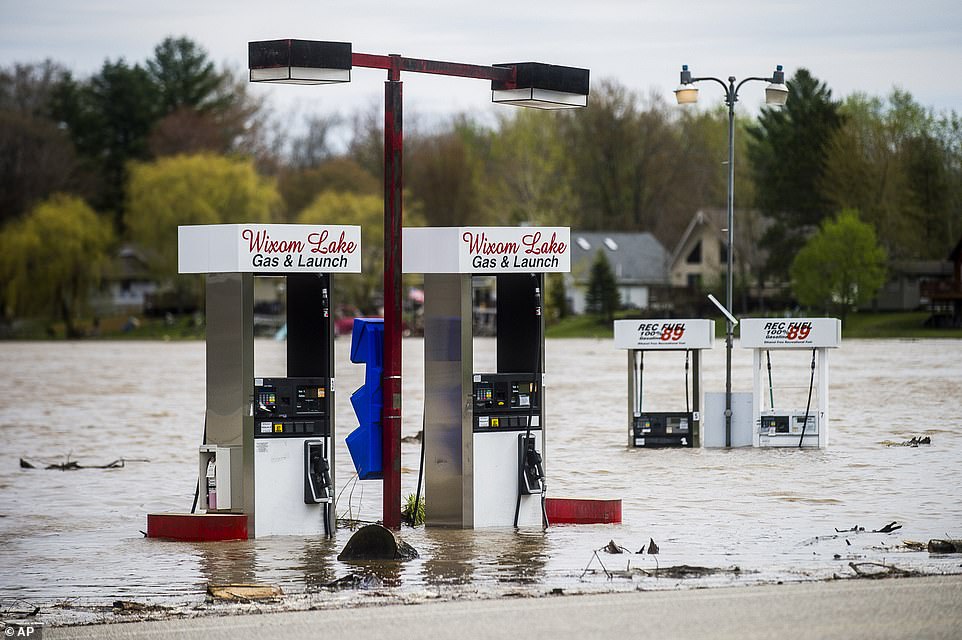 MICHIGAN: Water inundated a gas station in Wixom, Michigan. Nearby residents were forced to evacuate to local schools

‘A fire truck was driving around, broadcasting that (we needed) to evacuate. It’s a scary thing – you’re sleeping and awake to sirens.’

St. Croix, 62, his wife and a next-door neighbor were among more than a dozen people sheltering in one school.

Volunteers at the schools said about 120 vehicles were in the parking lots of a couple of schools and about 30 people had been staying on cots inside, according to WNEM-TV.

About a dozen people hunkered down overnight at a school in nearby Sanford but had left by early Tuesday afternoon, said Tom Restgate, an American Red Cross safety officer.

The cots inside the school were spread out to observe social distancing recommendations to fight the spread of the COVID-19 virus, Restgate said.

Heavy rains also caused flooding in parts of northwestern Indiana, including Crown Point – the Lake County seat – where about seven inches fell over the weekend. 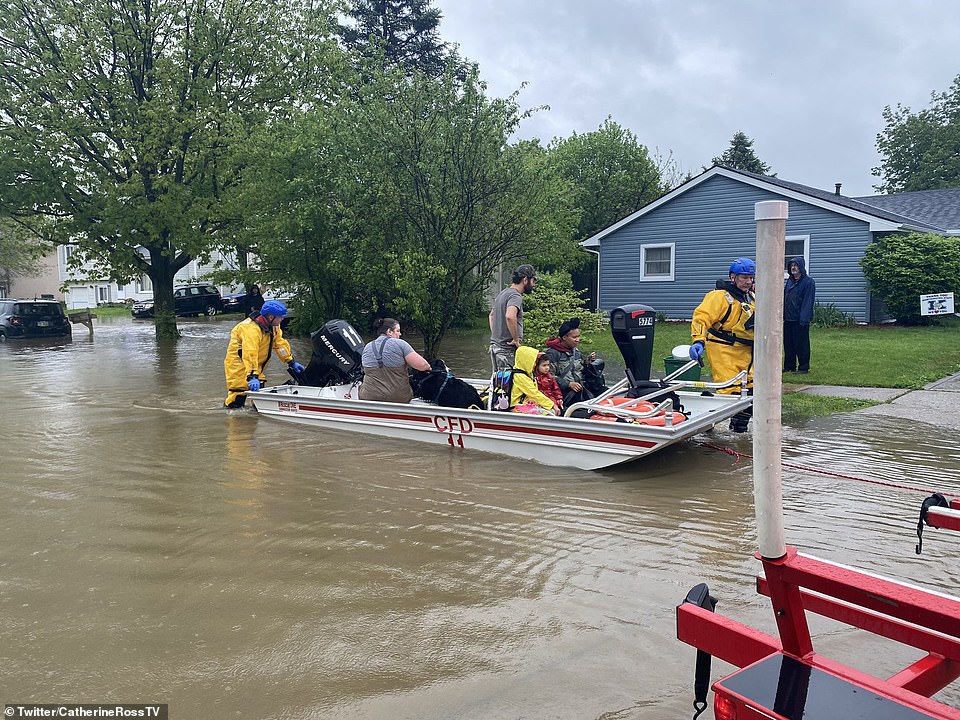 OHIO: In Westerville, Ohio locals were picked up by rescue crews in a motorized boat 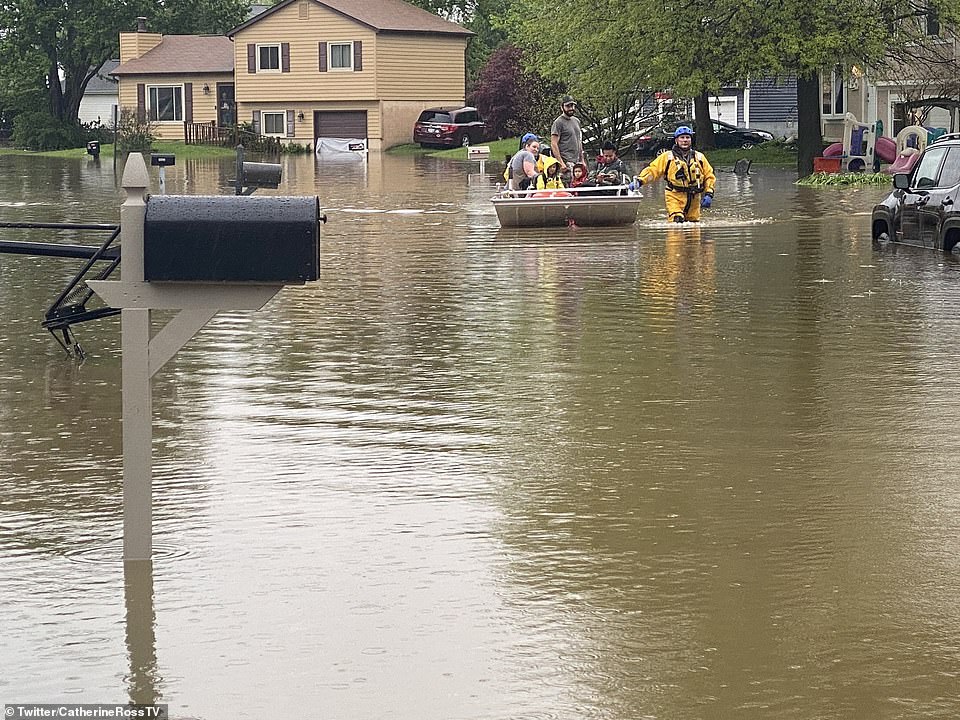 OHIO: Westerville residents are pictured being evacuated from their homes following heavy rain

Those waters receded Monday, but Uran and many other residents were continuing to clean up the watery mess on Tuesday, said Uran’s chief of staff, Greg Falkowski.

‘He got between 2 and 3 feet in his basement, so that´s what he´s working on right now,’ Falkowski said Tuesday afternoon.

Meanwhile, in Chicago, water that flooded some areas downtown was receding on Tuesday, but Larry Langford, a fire department spokesman, said that he did not expect power to be restored at the iconic Willis Tower for days because the rains caused the building’s subbasements to fill with as much as 25 feet (7.6 meters) of water.

And in DuPage County, west of the city, a search for an 18-year-old woman who was swept away by a surging DuPage River last Friday remained suspended on Tuesday because the water remained too high and the current too swift to conduct the search safely.

Tony Martinez, spokesman for the DuPage Forest Preserve District, said the area of the river where the woman was swept that is typically about 25 feet wide remained 200 yards wide. 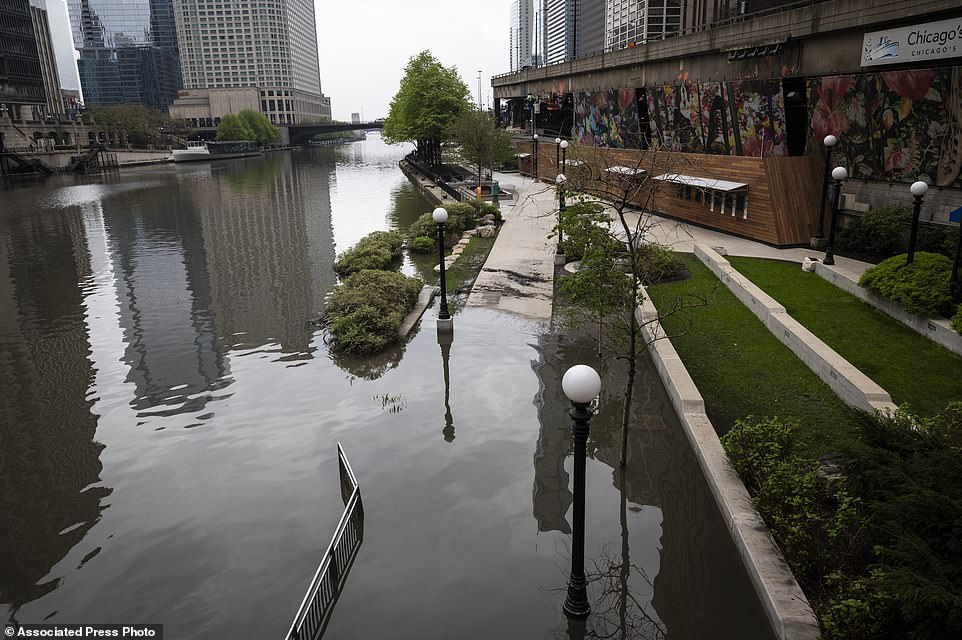 ILLINOIS: The Chicago River overflowed its banks and flooded the Riverwalk on Monday 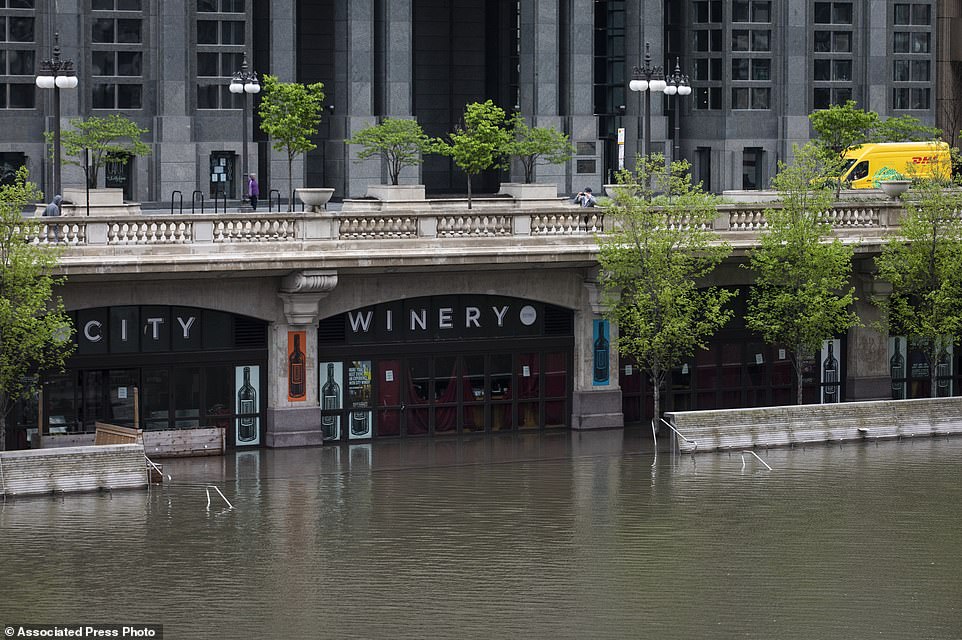 ILLINOIS: The Windy City was battered by heavy rain, which caused the Chicago River to breach its banks on Monday

Meanwhile, school buses and dump trucks were called out Tuesday in southwest Ohio to help evacuate people trapped in flooded areas in a commercial area with dozens of businesses in suburban West Chester Township.

By noon, West Chester Township spokeswoman Barb Wilson said a dozen people had been taken to a nearby high school, while other people were able to make it out of the flooded area in their own vehicles.

There were no injuries reported immediately in the area just off Interstate 75 north of Cincinnati.

Meanwhile, there are more flooding was forecast for parts of the Tittabawassee River, which was at 26.5 feet (8.1 meters) Tuesday morning. It was expected to crest Wednesday morning at about 30 feet (9.1 meters). Flood stage is 24 feet (7.3 meters). 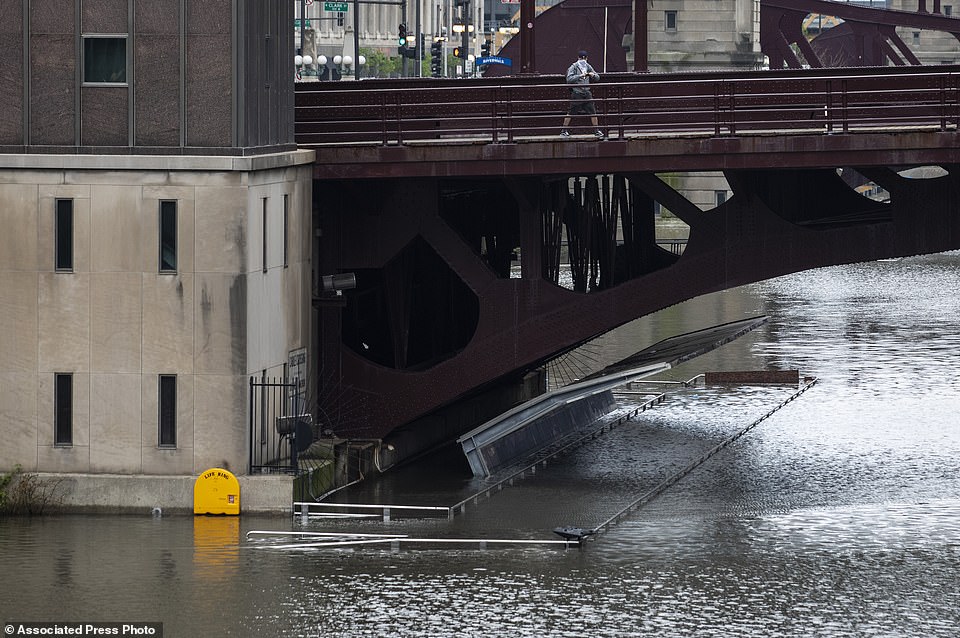 ILLINOIS: In Chicago, water that flooded some areas downtown was receding on Tuesday, but Larry Langford, a fire department spokesman, said that he did not expect power to be restored at the iconic Willis Tower for days because the rains caused the building’s subbasements to fill with as much as 25 feet of water