Katie Bowker was cared for by her midwife and friend Jenny Brown, pictured outside Manchester Coroner’s Court on Monday

A midwife lost her own baby boy in childbirth after her friends and colleagues delivered him in hospital following a series of blunders.

Dexter Bowker was born on November 29, 2016 at North Manchester General Hospital but never took a breath. Medics felt a pulse in his umbilical cord after his birth, but could not resuscitate him.

At the time, his mother Katie Bowker, 39, was a midwife at Royal Oldham Hospital, which is also part of Pennine Acute NHS Hospitals Trust, and two colleagues had taken charge of Dexter’s delivery.

But an inquest at Manchester Coroner’s Court found medics had failed to pick up a slowing in Dexter’s foetal growth towards the end of the pregnancy.

A community midwife who saw her at 26 weeks and at 38 weeks admitted she should have been sent for further scans.

It also emerged that the midwife who helped her in labour was due to have refresher courses on aspects of midwife care including neo-natal resuscitation.

Mrs Bowker, from Bury, who has a son called Harvey with her husband Adam, told the inquest of the horrifying moment she learned Dexter had died after first being placed on her chest.

Fighting back tears, Mrs Bowker said: ‘I held his [umbilical] cord and could feel his cord pulsations,’ she said. ‘But I remember thinking, ‘I haven’t heard him cry.’

‘I didn’t realise how bad it was until Nic [Nicola Jagat Singh] took him off me. Jenny [Brown] pulled the emergency bell and then everyone came in.’ 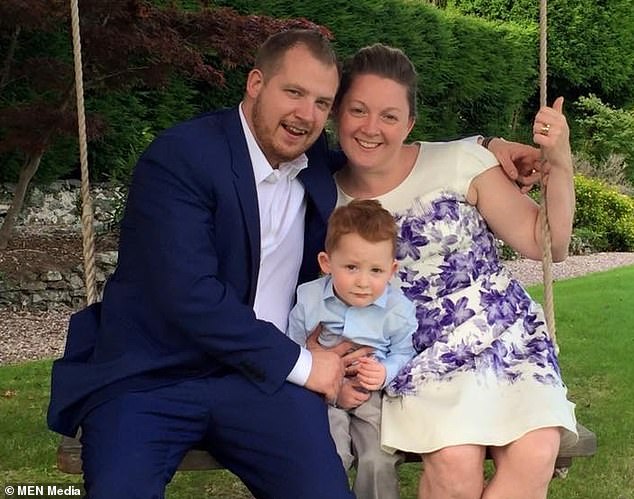 She added: ‘I was thinking ‘he’ll come round in a minute, he will cry in a minute’.

‘I remember them all looking at each other and shaking their heads because they couldn’t do any more at that point. 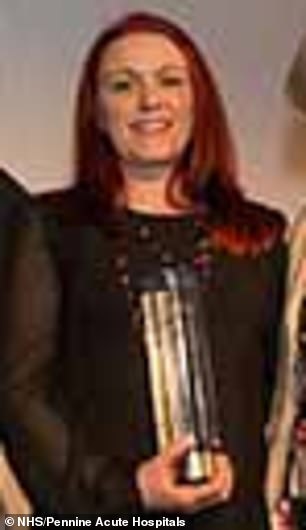 Ms Brown (pictured in 2016), the midwife who helped her in labour, was due to have refresher courses on aspects of midwife care

‘The consultant told us there was nothing else they could do. That was it really.’

Mrs Bowker was a supervisor to her friend and colleague Jenny Brown, her midwife for much of her labour.

Mrs Brown had delivered Mrs Bowker’s first child Harvey but at the time was based on the hospital’s post-natal ward and had not worked on the labour ward for 18 months.

The inquest heard her training compliance was at 44 per cent and she had requested ‘refresher’ courses so her skills, including neonatal resuscitation, were up to date.

When asked if she felt confident looking after Mrs Bowker, Mrs Brown said: ‘I wouldn’t have done it otherwise.’

But she had not obtained permission from the hospital’s head of midwifery to be Mrs Bowker’s midwife, although colleagues ‘assumed’ she had.

Mrs Brown initially provided care to Mrs Bowker in the hospital’s birthing pool but when she came to the end of her 12 hour shift she handed over to night midwife Ms Singh, staying on only to take notes. 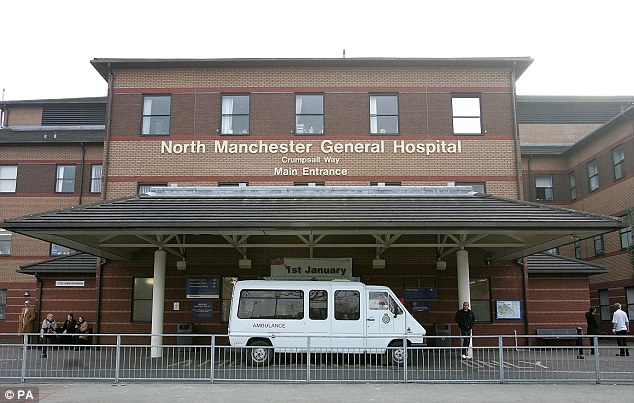 Both midwives were concerned by a rise in Mrs Bowker’s temperature and had wanted to transfer her to the labour ward sooner but she’d refused, Ms Jagat Singh said.

‘We were really looking forward to bringing him home’, mother says

Speaking after the inquest, Katie Bowker and her husband Adam, 34, released the following statement:

‘Dexter was a very loved and beautiful little boy. We were all really looking forward to bringing him home and welcoming him to our family, none more so than his big brother, Harvey.

‘He was only five-years-old when we lost Dexter and for him to deal with all this at such a young age is absolutely heartbreaking. This has devastated our whole family and it has been a complete nightmare for us all.’

‘As a midwife myself I knew instantly when things started to go wrong. Five minutes after he was born I knew he wasn’t doing what he was supposed to.

‘We had no inkling whatsoever before then and for things to go so drastically wrong was beyond anything we could have ever imagined.

‘I no longer have any contact with the midwife who was caring for me while I was in labour but I still work for the Trust and can see first-hand the changes that have taken place.

‘Mistakes were made but they have been picked up by the Trust and things are now much better. I can see the positives that have come out of this tragic incident.

‘It has all been extremely hard to come to terms with and I have struggled at work. The Trust have been great with me and my managers have all been really supportive.

‘It is getting easier for me to be around babies again and I am now actively supporting other mums who have lost their children to make sure that they always get the best care. I don’t want anyone else to have to live through such a distressing experience as we have.’

Mrs Brown said that the labour had appeared to be progressing well with ‘all observations fine’.

But when Dexter was delivered he was ‘pale and floppy and there was no attempt to take breath,’ said Ms Jagat Singh.

She had felt ‘pulsations’ in his umbilical cord but they were not ‘adequate’ and she’d then raised the alarm.

Attempts were made to resuscitate Dexter but he was pronounced dead 50 minutes later.

The court also heard evidence concerning the number of scans Mrs Bowker had during her pregnancy.

Although she had had two ultrasound scans a third had been cancelled but not rescheduled.

Dr Claire McGettigan, a consultant obstetrician and gynaecologist at Bury’s Fairfield General Hospital, had seen Mrs Bowker but not read all her case notes.

If she had, she said, she would have sent Mrs Bowker for a third scan.

They included a ‘significant fall’ in his growth rate towards the end of pregnancy which warranted ‘further investigation’.

Mrs Bowker should have had a further ultrasound scan after 38 weeks and if it had revealed a growth restriction she would have been offered an earlier induced birth, he said.

Mrs Bowker’s temperature had also remained high during her labour but staff had not reacted while Dexter’s heart rate should have been monitored by CTG (cardiotocography).

He added that the ‘most likely’ cause of Dexter’s death was hypoxia caused by a cord obstruction.

Simon Mehigan, divisional director of midwifery for the trust, said there had been several ‘missed opportunities’ by staff and procedures had been improved.

Recording Dexter’s death as natural causes contributed to by neglect, coroner Angharad Davies said: ‘Dexter’s delivery was high risk due to the fact that he had foetal growth restriction from 34 weeks gestation. 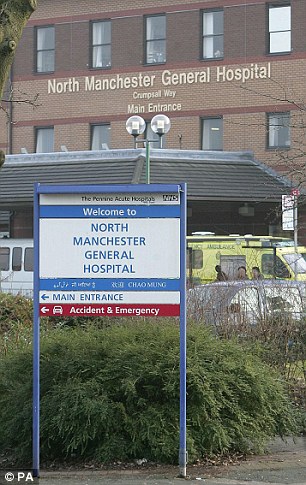 ‘There were several missed opportunities by the Trust to recognise this risk and act upon it.’

She added that the fact the growth restriction was not picked up meant he was not continually monitored during labour which ‘more than or trivially contributed to his death’.

After the case, Victoria Beel, clinical negligence specialist at Slater and Gordon, said: ‘As a midwife herself, Katie has helped countless mothers bring their babies safely into the world.

‘To lose her own son in these circumstances and to hear the coroner’s conclusion that Dexter’s death was contributed to by neglect of those that she trusted to look after her, has been devastating.

‘Whilst the family acknowledges that positive changes have been made since Dexter’s death, they hope that the coroner’s findings today will underline the importance of proper systems and training so that no other family has to suffer such a tragedy.’