Members of a group of Honduran migrants, which included a mother who had been photographed running with her daughters from tear gas several weeks ago, began seeking asylum at the US border with Mexico on Monday, according to a Reuters witness and lawyers for the group.

The group comprised mostly teens but also included Maria Meza and her children, the lawyers said.

The family appeared in a widely circulated photograph taken by Reuters as they fled tear gas thrown by US authorities during a protest at the border last month when some migrants rushed the US fence.

Sandra Cordero, from advocacy group Families Belong Together, which accompanied the migrants, said eight unaccompanied minors were being processed for asylum.

Meza and her family were also being processed, Cordero said.

Maria Meza and her children, a migrant family, part of a caravan of thousands traveling from Central America en route to the United States, run away from tear gas in front of the border wall between the US and Mexico in Tijuana, Mexico, November 25, 2018. The family began seeking asylum at the US border with Mexico on Monday 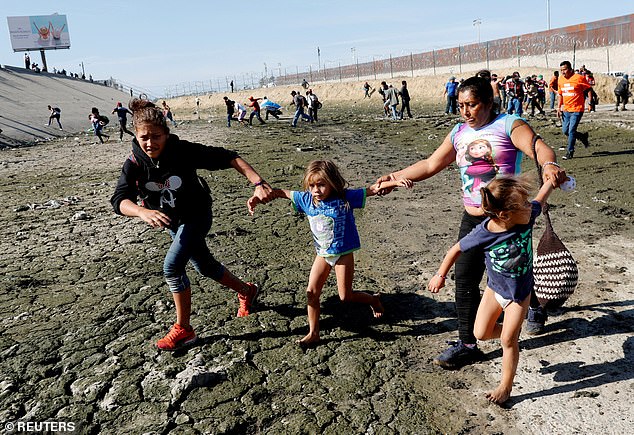 Maria Meza (2nd from R) runs away from tear gas with her daughters Jamie Mejia Meza, aged 12 and her five-year-old twin daughters Saira Mejia Meza and Cheili Mejia Meza (L-R) in front of the border wall between the US and Mexico, in Tijuana, Mexico November 25, 2018

A system dubbed ‘metering’ limits how many can ask for asylum each day at US ports of entry, leading to months-long waits in Mexico for thousands of migrants fleeing violence in Central America.

Democratic US Representatives Jimmy Gomez and Nanette Barragan, along with lawyers, accompanied the group at the Otay Mesa port of entry in Tijuana, Mexico, on Monday afternoon, the Reuters witness said.

Gomez wrote on Twitter: After 7hrs, I can now confirm: Maria Meza & her kids – featured in this @Reuters image fleeing tear gas at the border last month – just filed for asylum. 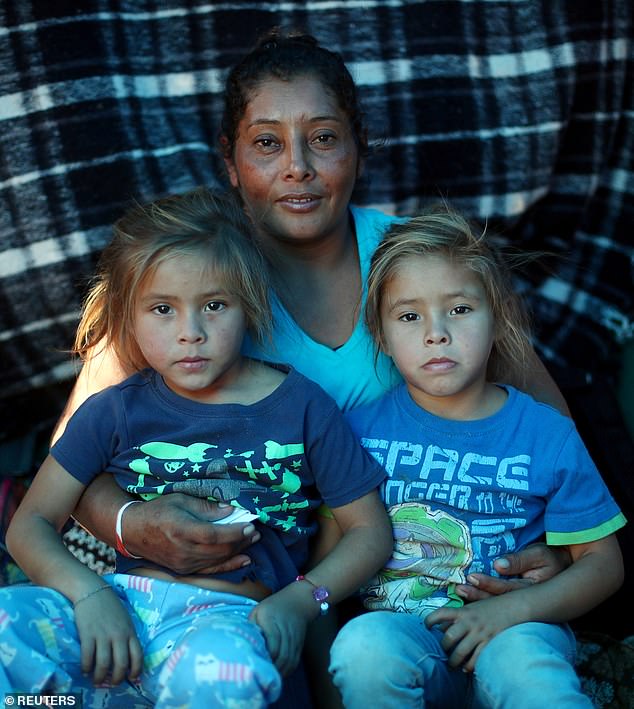 Meza, a 40-year-old migrant woman from Honduras, sits with her five-year-old twin daughters Cheili Mejia Meza and Saira Mejia Meza inside their tent in a temporary shelter in Tijuana, Mexico, November 26, 2018 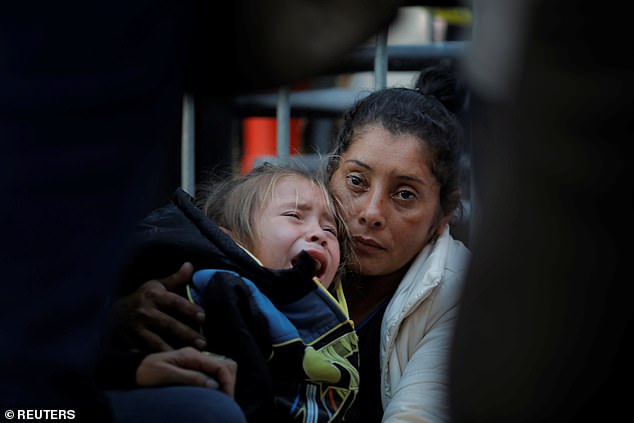 Maria Meza holds her daughter as she waits at the Otay Mesa port of entry in San Diego, California to be processed as an asylum seeker, as seen from Tijuana, Mexico December 17, 2018

‘They’re on American soil. @RepBarragan & I are still here observing conditions on the ground.’

US Customs and Border Patrol (CBP) agents had said the port of entry was full, Gomez said.

Surrounded by advocates and lawyers, the migrants sat by a metal turnstile, having gone beyond a sign marking the division between Mexico and the United States.

But by Monday evening, after more than four hours waiting, CBP officials came to let several unaccompanied minors pass through.

The asylum seekers had been part of groups of thousands of migrants known as caravans that left from Central America and arrived in Tijuana in recent months.

US President Donald Trump declared the caravans an ‘invasion,’ and sent several thousand troops to ‘harden’ the border, including with barbed wire. 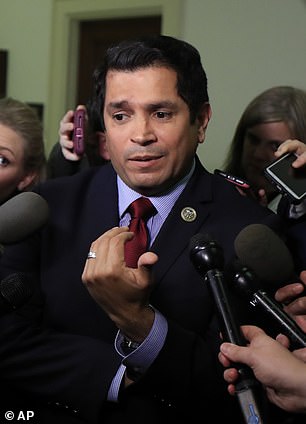 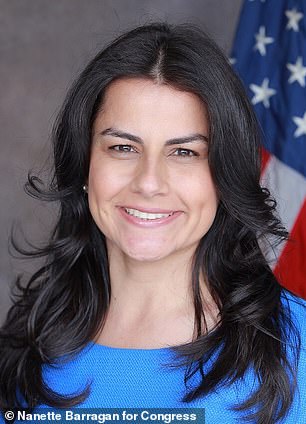 Democratic US Representatives Jimmy Gomez (left) and Nanette Barragan, (right) along with lawyers, accompanied the group at the Otay Mesa port of entry in Tijuana, Mexico, on Monday afternoon, the Reuters witness said

Activists say metering is intended to deter asylum applicants by making the process arduous, while US officials maintain the system only exists to manage overcapacity at ports of entry.

CBP said in response to questions that this year it had seen a more than 100 percent increase in asylum seekers processed at ports of entry and that it processed people as quickly as possible.

‘As we have done for several years, when our ports of entry reach capacity, we have to manage the queues and individuals presenting without documents may need to wait in Mexico as CBP officers work to process those already within our facilities.’

Lawyers from Al Otro Lado were also with the children.

The organization has accompanied vulnerable groups to the border in order to request asylum, bypassing the semi-formal list system that controls the numbers of migrants who try to enter each day.

Earlier this month, a single mother and her 9-year-old daughter were able to ask for asylum at the San Ysidro port of entry only after a congresswoman – who was touring the port at the time – stepped in and told CBP officers they were required to process them by law, according to Lindsay Toczylowski, executive director at the Immigrant Defenders Law Center.