Mike Pence believes he could be the person to ‘save Donald Trump’s soul,’ new book claims

Vice President Mike Pence believes that he can be the person to ‘save Donald Trump’s soul’ but desperately wants his job at the same time, an explosive new book has claimed.

When Pence took office he ‘actually believed he could bring Trump to Jesus,’ despite his string of affairs and philandering.

Pence felt that ‘like Jesus, he was willing to do whatever was necessary to help save Trump’s soul’, write authors Michael D’Antonio and Peter Eisner in The Shadow President: The Truth About Mike Pence, released August 28.

The book includes claims that the vice president has developed a fake sincerity and niceness that he has ‘weaponized as a tool of persuasion and deflection.’

It dubs Pence ‘the most successful Christian supremacist in American history’ and says that the VP, who once considered becoming a Catholic priest before becoming an evangelical Christian, has God-like delusions of grandeur.

Future president Mike Pence: A new book has claimed the vice president has ‘god-like delusions of grandeur’ and believes he could be the one to save Trump’s soul 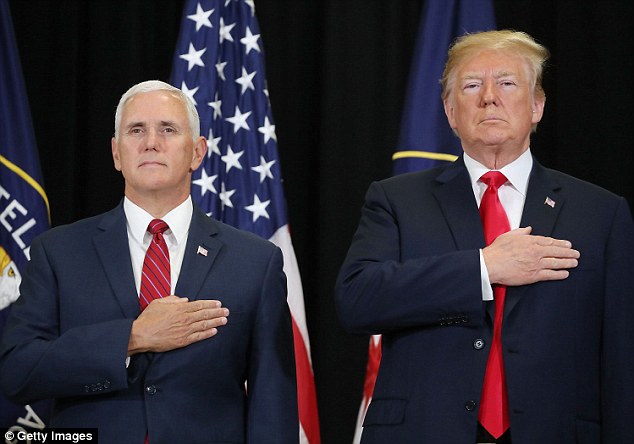 The authors claim that one of the main reasons Pence became vice president was because he knew Trump was ‘vulnerable to impeachment’.

‘If this occurred, Pence would see the hand of God at work in his elevation to the Presidency. In the meantime he would wait, and watch,’ the authors write.

Pence has managed to stay above the turmoil and carnage that had marked the Trump White House by giving the one thing that the president demands: unquestioning loyalty.

The vice president admiringly stares at Trump’s head during press conferences and nods as if he were watching his own son give a commencement address.

He never publicly questions Trump and only in private will he suggest other ways of doing things, the book claims.

At the core of the former governor of Indiana are two things: his religion and his corporate masters.

He is on Earth to ‘fashion a nation more pleasing to his God and corporate sponsors.’

Pence is a self-described born-again evangelical Catholic who is against abortion and homosexuality and he is strongly pro-gun.

The 59-year-old former radio host prepared for most of his life to serve in the White House, the book claims.

Yet, he finally reached that point by serving alongside Trump who is a ‘living exemplar of everything that Christianity and conservatism abhorred’.

‘Pence believes he is on a mission from God and, according to one source: “The vice president actually believed he could bring Trump to Jesus, and like Jesus, he was willing to do whatever was necessary to help save Trump’s soul.”

He even believed Trump offering him the job was a ‘miracle.’ 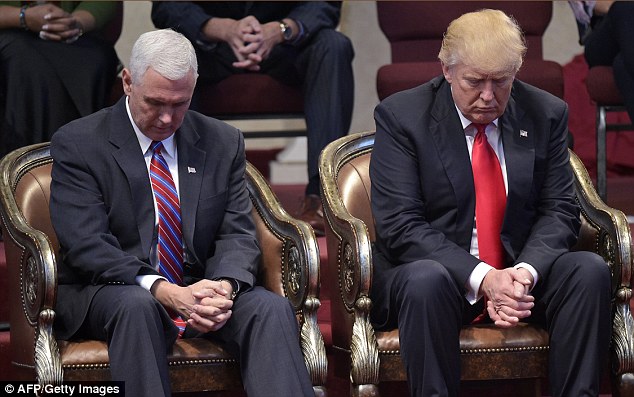 Pence is a self-described born-again evangelical Catholic who is against abortion and homosexuality and he is strongly pro-gun (pictured praying with Trump during the Midwest Vision and Values Pastors and Leadership Conference at the New Spirit Revival Center in Cleveland Heights, Ohio in 2016)

When Trump flew to meet him in Indianapolis, the flat tire on the plane gave Pence 40 minutes more to prepare a ‘hard sales pitch’ about himself.

A source said that he went into the job with his ‘eyes open’ and ‘knew exactly who Trump was and what he faced.’

‘Based on this perspective, the airplane’s flat tire could be seen as a sign from heaven,’ the authors write.

Pence and his wife Karen took a moment to pray for guidance before he accepted.

The book also looks back to Pence’s days as president of the Phi Gamma Delta fraternity at Hanover College.

Even then, his instinct for survival was strong and one night when the associate dean arrived in the middle of a boozy party Pence ‘ratted everyone out’. 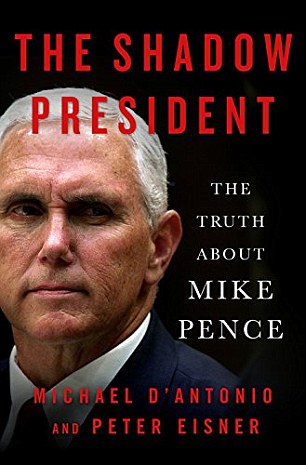 The Shadow President: The Truth About Mike Pence, published by Thomas Dunne Books will hit stands on August 28

He was rewarded with a job offer from the college while everyone else was grounded for months.

The book also disputes Pence’s claim that he lost 50lbs while doing athletics at his high school to prove that he overcame adversity.

His yearbook photos actually show no major weight loss at all.

When he was governor of Indiana, Pence was away so much on weekends that a former staffer said he ‘kept banker’s hours’ and ‘does not like to work very hard.’

In fact, his whole office once put up a sign which said: ‘Closed for the day.’

Pence did find time to order series of custom embroidered clothes – dress shirts, polo shirts and jackets – with his name and ‘governor of Indiana’ written on them.

Even before he became second string to the president, Pence bragged about how his swearing-in ceremony would take place when he became commander-in-chief.

At the time he was a representative and during a tour of Capitol Hill in 2010 he told a group of interns that he would be sworn in on the East Front of the Capitol and not the West front as has happened since Ronald Reagan’s inauguration.

‘One intern would recall that he said it was all about the light. In January, the noontime sunlight on the west-facing side of the building was just too bright.’

Pence also has a reputation for rubbing people’s shoulders, a bizarre quirk that freaked out reporters who covered him.

John Krull of The Indianapolis News said that one day he was speaking with a colleague when ‘all of a sudden, somebody was grabbing my shoulders from behind and almost massaging them.’

He said: ‘I turned around and I was surprised – it was the governor, Mike Pence.’

Krull said he felt uncomfortable and that it happened more than a few times.