Pence’s last trip out of Washington was delayed by the news that one of his top aides, spokeswoman Katie Miller, had contracted COVID-19.

And while Pence spent several days keeping his distance from President Trump, he did not social distance during his tour of Florida Wednesday, though briefly put on a mask to address nursing home workers from 20 feet away.

Vice President Mike Pence (right) and Florida Gov. Ron DeSantis (left) sit and wait for their foord at Beth’s Burger Bar in Orlando. Neither wore a mask into the restaurant 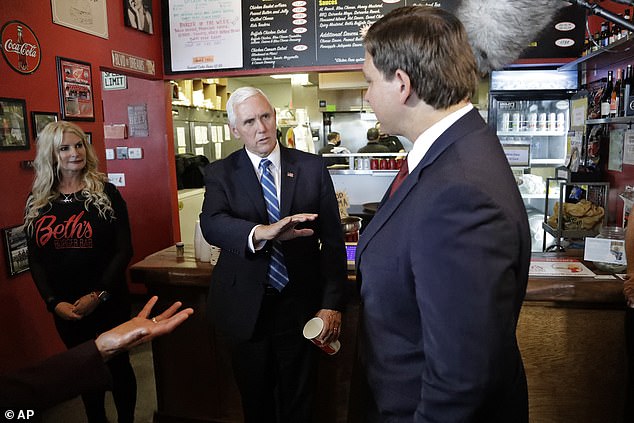 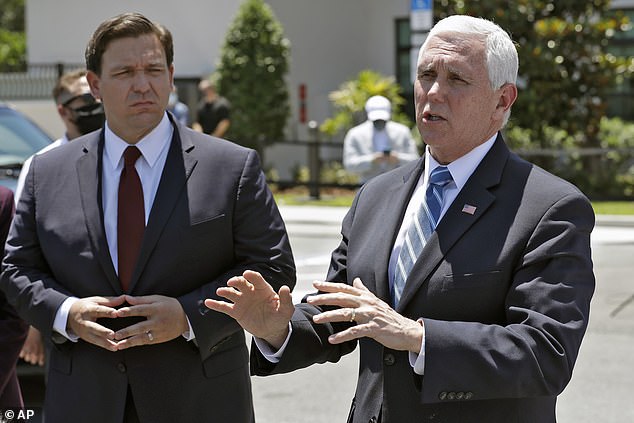 As soon as he stopped talking to the workers, and with the home’s director of nursing – in a mask – along his side, he peeled off his face covering to briefly address reporters.

Washington-based reporters traveling with the vice president were tested for the virus the day before.

Pence was trying to convey a sense of normalcy, as he sauntered into Beth’s Burger Bar and chatted with the owner Beth Steele about her best-selling peanut butter burger and how he preferred his burger – not spicy, with pickles and cheese.

Neither did Steele and some of the restaurant workers who waited on the vice president.

Pence’s presence was calm, as he praised Florida for ‘leading the way.’

DeSantis, on the other hand, acted defensively for most of the day.

When a reporter asked about a controversial firing of a staffer who had worked on Florida’s COVID-19 database, DeSantis turned the query into an attack on the media’s coverage of his handling of the pandemic.

‘Our data is available, our data is transparent – in fact Dr. [Deborah] Birx has talked multiple times about how Florida has the absolute data,’ DeSantis began, referencing a top doctor from the White House’s coronavirus taskforce. ‘So any insinuation otherwise is just typical partisan narrative trying to be spun.’

‘And part of the reason is that because you got a lot of people in your profession, who waxed poetically for weeks and weeks about how Florida was gonna be just like New York. “Wait two weeks, Florida’s gonna be next. Just like Italy, wait to weeks,”‘ DeSantis continued.

‘Well, hell, we’re eight weeks away from that and it hasn’t happened,’ DeSantis said, raising his voice.

DeSantis pointed out that Florida has a lower death rate than broad swaths of the country.

Florida also saw ‘tens of thousands’ of people coming in from the world’s ‘hot zone,’ DeSantis said, though didn’t elaborate where.

‘So we’ve succeeded,’ the Republican governor said. ‘And I think that people just don’t want to recognize it because it challenges their narrative. It challenges their assumption, so they’ve got to try to find a Boogeyman – maybe it says there are black helicopters circling the Department of Health.’

‘If you believe that, I got a bridge in Brooklyn, I’d like to sell you,’ he scoffed.