Secretary of State Mike Pompeo continued to accuse Iran of orchestrating the attack on a Saudi Arabian oil facility last week, calling it a ‘state on state act of war’ and claiming the White House has hard evidence to prove it.

Following the drone attack on a major Saudi oil processing plant on September 14, Pompeo has been adamant that Iran was behind the attack and it was targeted to hurt ‘the world’.

‘This was Iran true and true, and the United States will respond in a way that reflects that act of war by this Iranian revolutionary regime,’ Pompeo said on Face the Nation on CBS Sunday in New York.

‘The U.N.’s primary charter is to protect peace around the world. This was a state on state act of war,’ he added, foreshadowing his points going into this week’s United Nation’s General Assembly.

Secretary of State Mike Pompeo continued to accuse Iran of launching the Saudi Arabia oil plant attack on September 14. On Sunday he appeared on CBS’s Face the Nation where he said: ‘This was Iran true and true, and the United States will respond in a way that reflects that act of war by this Iranian revolutionary regime’ 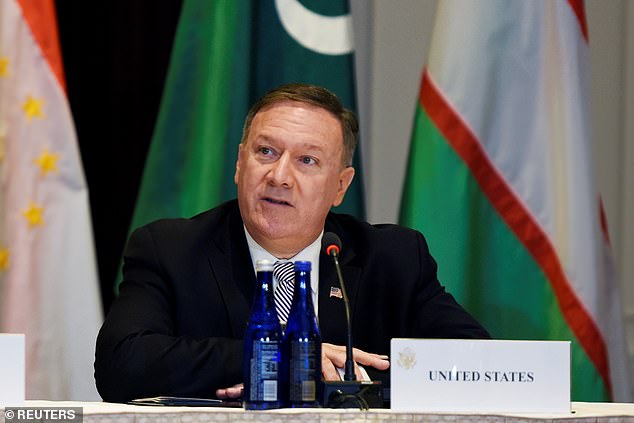 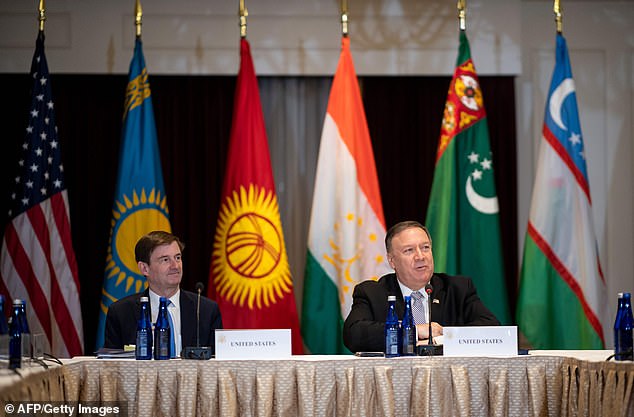 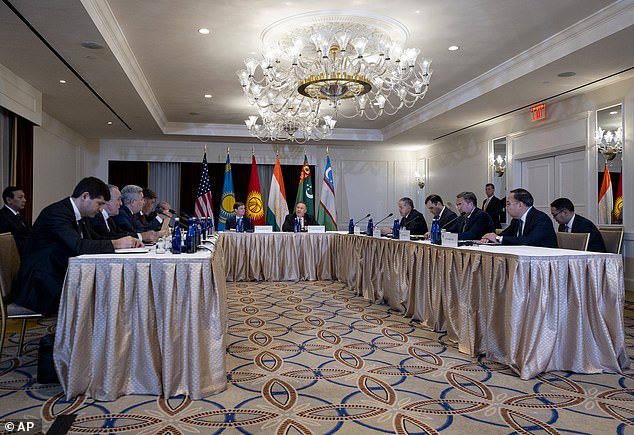 On Sunday Pompeo met with leaders from Kazakhstan, Uzbekistan, Tajikistan, Kyrgyzstan, and Turkmenistan ahead of this week’s United Nation’s General Assembly

In the Saudi oil plant attack a explosions wrecked the facility at 17 points of impact, sparked a spike in oil prices and initially set back half of the kingdom’s oil-producing capacity.

Tensions between the US and Tehran have escalated under the Trump administration, particularly after the U.S. withdrew from the 2014 nuclear accord.

While Pompeo has reiterated time and time again this week that Iranian leaders were behind the attack, Donald Trump has refused to outright accuse Iran of masterminding the attack.

‘I don’t think anyone should mistake President Trump for having the resolve to make this right and I think when the moment calls for it I’m sure the president will take all appropriate action,’ Pompeo said Sunday. 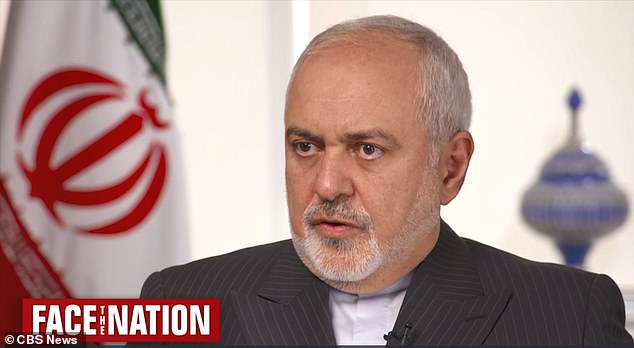 Iran has denied the attacks. Foreign Minister Mohammad Javad Zarif (above) spoke on Face the Nation and blamed the Houthis, the Iran-backed rebel group in Yemen, who claimed responsibility of the attack, though doubts have been cast of the veracity of their claim 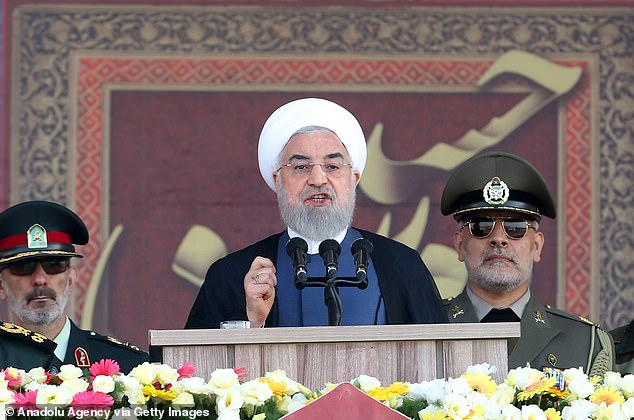 Tensions between the U.S. and Iran have escalated under the Trump administration and on Sunday Iran’s President Hassan Rouhani warned the West to ‘stay away’ during a parade in Tehran (above)

However, Iran has denied being involved in the attacks.

Foreign Minister Mohammad Javad Zarif pointed the blame to the Houthis, the Iran-backed rebel group in Yemen, who claimed responsibility of the attack, though doubts have been cast of the veracity of their claim.

‘Well, it is difficult for the United States to explain why its state of the art equipment was not able to intercept these weapons. But the fact of the matter is that the Houthis have accepted responsibility,’ Zarif said on Face the Nation.

Pompeo disagreed saying there is ‘ample evidence’ that Iran is lying. He added that the Houthis simply don’t have the capabilities to launch such a ‘sophisticated attack.’

‘These weapons systems had ranges that could not have come from the Houthis. It is crazy for anyone to assert they did. I mean it is literally nuts on its face to make an assertion that this was an attack by the Houthis,’ Pompeo said.

On Friday in response to the oil attack Trump ordered the Pentagon to deploy hundreds of additional troops and missile systems to Saudi Arabia and the UAE. The Pentagon called the deployment ‘defensive in nature’.

As Washington seeks to find a diplomatic solution to ease the rising tensions between the two nations, Pompeo said that defensive military deployments and imposing more economic sanctions are not the only tools the White House will use.

On Sunday Iran’s President Hassan Rouhani denounced the presence of foreign forces in the Gulf and warned the West to ‘stay away’, after America sent in reinforcements to the region.