President Donald Trump says he will make a decision about whether go forward with a June 12 summit in Singapore with Kim Jong-un by ‘next week.’

The president told DailyMail.com on Wednesday as he was leaving the White House: ‘It could happen. We will know next week about Singapore.’

‘Some day a date will absolutely happen. It could very well be June 12,’ he added after a journalist made note of his pessimism. ‘We’ll see. We’ll know next week.’

He did not respond to a query about why he would not go, especially after sending senior U.S. officials to Singapore in advance of the scheduled summit.

The officials will head there this weekend, Fox News reported, to set the agenda for nuclear talks and firm up logistics.

Secretary of State Mike Pompeo this morning said that all signs point to a Singapore summit between Trump and Kim despite the public wobbling from both sides.

‘We’re already seeing this in the preparations for our historic meeting with North Korea, still scheduled for June 12,’ he said in testimony Wednesday before the Senate Foreign Relations committee.

Pompeo, who has twice met with Kim in North Korea since the beginning of April, told senators in his opening remarks, ‘We have a generational opportunity to solve a major national security challenge.’

‘We are clear-eyed about the regime’s history. It’s time to solve this once and for all. A bad deal is not an option,’ the president’s point-man on the summit asserted. ‘The American people are counting on us to get this right. If the right deal is not on the table, we will respectfully walk away.’ 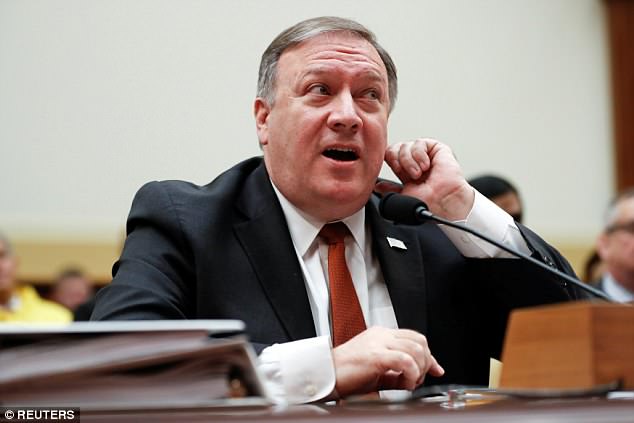 Secretary of State Mike Pompeo says that all signs point to a Singapore summit between Donald Trump and Kim Jong-un, despite the public wobbling from both sides

President Trump was hedging his bets publicly as late as Tuesday afternoon on the likelihood that his Kim summit would move forward.

As he greeted the South Korean president at the White House, Trump said, ‘We’ll soon know.’ He did not comment on the state of play after his foreign counterpart’s visit.

Trump in the Oval Office told journalists asking about the June 12 summit, ‘We’re moving along. We’ll see what happens. There are certain conditions we want to happen. I think we’ll get those conditions.

The U.S. president also said, ‘There’s a very substantial chance that it won’t work out, and that’s OK.’

South Korea’s Moon Jae-in and Trump were meeting at the White House on Tuesday for a round of talks that will almost certainly define the position of the U.S. president on the future of the sit-down he planned to have with Kim in Singapore next month.

The New York Times reported Sunday that Trump was considering backing out of the face-to-face talks that could turn into an embarrassment for him.

Trump is said to have surveyed aides the optics of Kim’s own threats to cancel the June 12 meeting with Moon in a weekend phone call. 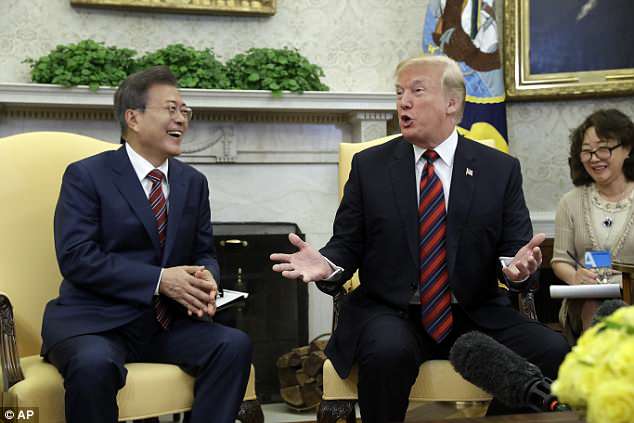 Chung Eui-yong, national security adviser to Moon, told reporters en route to Washington that he was not only on the call ‘no such thing happened’ and he is ‘99.9 percent’ sure the meeting in Singapore will move forward.

‘We have perceived none of that,’ Chung said of reported nervousness on the part of the U.S.

Trump said Tuesday for the first time that the summit could happen, just at a later date. ‘It may not work out for June 12,’ he said.

He said that he doesn’t ‘want to waste a lot of time’ on talks and suspects that Kim doesn’t either.

The U.S. president also said that he believes that Kim’s surprise visit to Beijing in early May prompted the North Korean dictator to play chicken.

Trump said his trip to Beijing last year was ‘two of the great days of my life.’

‘I don’t think anybody’s ever been treated better in China in their history.’

But he said his counterpart in China, Xi Jinping, ‘I think that President Xi is a world-class poker player.’

‘I think there was a little change in attitude from Kim Jong-un. So I don’t like that,’ he said. ‘I can’t say that I’m happy about it,’ he said of the unexpected talks between Xi and Kim 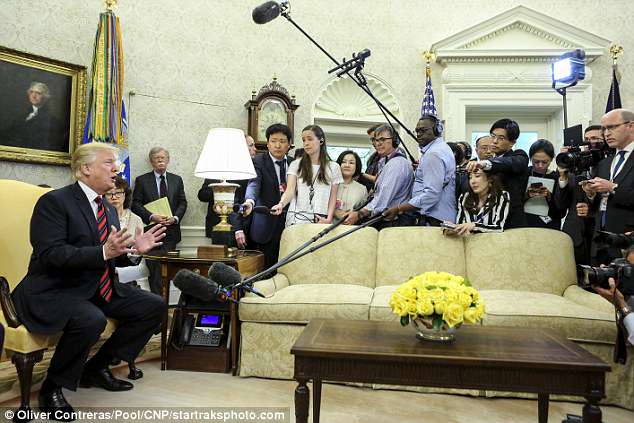 Trump in the Oval Office told journalists asking about the June 12 summit minutes later, ‘We’re moving along. We’ll see what happens. There are certain conditions we want to happen. I think we’ll get those conditions

Treasury Secretary Steve Mnuchin also told DailyMail.com on Monday morning that for now the summit is still on.

‘I don’t think the president gets cold feet about anything, so I think as the president has said, right now it’s still on, if that changes, you’ll find out about it,’ he said in response to reports that Trump is the one who could back down.

Chung meanwhile told South Korean press, ‘I listened in on the telephone conversation between the two heads of state, and no such thing happened.’

In an interview on Monday that aired in full during Fox New’s ‘The Story with Martha McCallum,’ Vice President Mike Pence said, ‘The president remains open to a summit taking place, and we’ll continue to pursue that path even while we stand strong on the objective of denuclearization and extreme pressure campaign that’s underway today.’

‘We offered concessions to the North Korean regime in exchange for promises to end their nuclear weapons program, only to see them break those promises and abandon them,’ Pence asserted. ‘It would be a great mistake for Kim Jong-un to think he could play Donald Trump.’

Kim has been taunting the U.S. since last week over annual military exercises on the Korean Peninsula that are conducted in conjunction with South Korea. The joint exercises were a condition of talks, however the North is now using them as a cudgel.

The isolated regime also took issue with past statements that Trump’s new national security adviser, John Bolton, about denuclearization, leading the U.S. president to provide assurances last week that Kim would not be ousted if he abandons his nuclear weapons program.

Trump told reporters last Wednesday as the news made its way to the White House that North Korea had not notified the United States of an intent to call off the summit nor had it iterated the demands that appeared in state-run media directly to the administration.

Asked if the summit would move forward then, he said, ‘We’ll have to see.’

The president has said that he will not budge on denuclearization of the peninsula, another facet of the meeting that Kim is now refusing to agree to.

‘I do think he’s serious. I think he would like to see that happen,’ Trump said of the matter on Tuesday. ‘I think he’s absolutely very serious, yes.’ 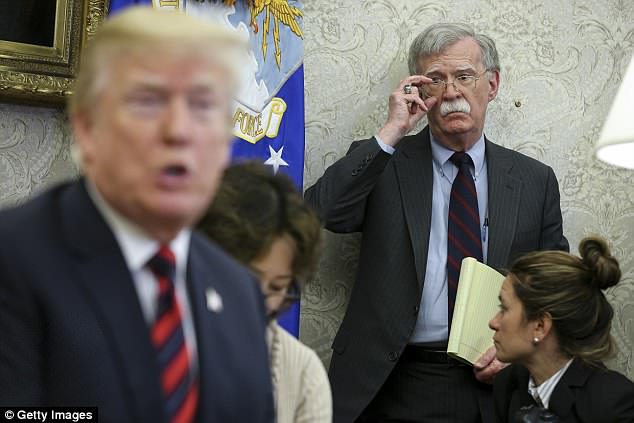 Kim has been taunting the U.S. since last week over annual military exercises on the Korean Peninsula that are conducted in conjunction with South Korea, and his new national security adviser John Bolton

Trump hosted Moon at the White House for talks in advance of the summit that was hanging by a thread. The two leaders spoke on the phone over the weekend, as well.

The president is said to have pressed Moon in the call on North Korea’s comments in public that the summit may not happen and Pyongyang’s commitments privately that Kim will attend the summit in Singapore, although Chung denied those reports.

Asked last Thursday if Kim is now the one in the driver’s seat on the summit, Trump’s spokeswoman said he’s absolutely not.

‘Nothing could be further from the truth,’ Sarah Huckabee Sanders said. ‘But they’re the ones that extended the invitation; we’ve accepted it. If they want to meet, we’re happy to do that. If they don’t, as the President has said, we’ll see what happens. But we’re going to continue the maximum pressure campaign in the meantime.’

President Trump has had a fairly muted response to North Korea’s posturing. Despite repeated claims that he wouldn’t be afraid to walk away from the conversation if it’s not a fruitful one, he has refrained from pulling the plug.

‘I think that we’ll probably have a very successful meeting,’ he said last Thursday as Kim was threatening to walk away.

Trump said: ‘My attitude is whatever happens happens.

Trump observed last Thursday, as he did on Tuesday, that Kim, perhaps, ‘spoke with China and changed his mind’ about a summit.

The president admitted that Kim’s visit to Beijing last week on Tuesday was ‘a little bit of a surprise’ to the Trump administration.

But he said of the mood swings, ‘I want to give everybody the benefit of a doubt.’

In her only on-camera briefing with press since North Korea made the threats, Sanders said, ‘If the North Koreans want to meet, we’ll be there. And at this point, there is not a lot of change beyond that, and certainly not in our process.’

She told a reporter who asked ‘what game’ North Korea is at, ‘You’d have to ask North Korea what game they’re playing. I can tell you what we’re doing, and we’re continuing to move forward in preparations.’

Mnuchin on Monday declined to go into further detail to the DailyMail.

The White House has remained publicly optimistic that a sit-down will take place between President Trump and Kim, in spite of the flare-up in hostilities. If doesn’t, the U.S. says it will keep its choke hold on North Korea’s economy.

North Korea first said that it objected to joint military exercises the U.S. and South Korea were conducting, warning that it would not sit idly by while the countries rehearsed their invasion.

It then blasted the U.S. for what it called a ‘hostile policy, nuclear threats and blackmail’ and went after Bolton in a second statement threatening to call off the talks between Trump and Kim.

He explicitly took issue with the U.S. position of ‘abandoning nuclear weapons first, compensating afterwards’ saying the proposed terms are ‘essentially a manifestation of awfully sinister move to impose on our dignified state the destiny of Libya or Iraq which had been collapsed due to yielding the whole of their countries to big powers.’

‘I’m willing to do a lot… He’ll have protections,’ Trump said. ‘The best thing he could do is make a deal.’ 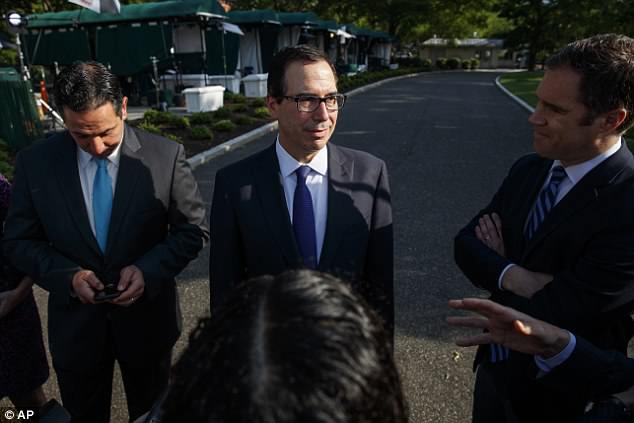 Treasury Secretary Steve Mnuchin told DailyMail.com on Monday morning that for now the summit is still on. ‘I don’t think the president gets cold feet about anything,’ he said

Providing assurances to Kim, Trump said that the deal he intends to make with North Korea would keep the dictator in power. He said that Kim wouldn’t be ousted like Libya’s Muammar Gaddafi was after he voluntarily dismantled his nuclear program in order to normalize relations with the U.S.

With Kim it would be ‘something where he’d be there, he’d be running his country. His country would be very rich,’ Trump said.

‘If we make a deal, I think Kim Jong-un will be very, very happy,’ he said.