Pep Guardiola leaves an unfillable void on the touchline. That aura alone is often enough to carry Manchester City through. His absence was obvious in the second half of their defeat by Liverpool in April and painfully so on Wednesday night too.

He sat up in the stands alongside his son, Marius, brooding over a performance that had unquestionably been coming. Guardiola himself had warned as much just days earlier. Unfortunately for Mikel Arteta, it came when it was his chance to patrol the home technical area.

This was not exactly an ideal audition for a top job, the sort of which those around Guardiola – suspended for the opening Champions League game – claim his assistant is destined to be offered in the near future. 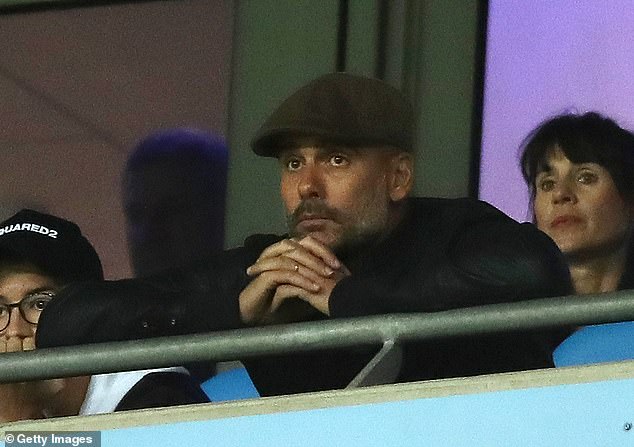 Sources affectionately call Arteta a ‘photocopy’ of Guardiola and that goes some way to explaining the esteem with which he is held. Even when a teenager at Barcelona, supporters coined the young midfielder ‘Little Guardiola,’ such were the similarities with which they embraced the game.

The pretender would never emulate his elder’s achievements and it is a tall order in management as well.

Arteta – a quiet, measured coach the majority of the time – did everything he could to affect this. He sent his players out early after half-time. He sent for Leroy Sane shortly after the break in a bid to arrest a two-goal deficit.

But the Guardiola mannerisms on display were almost all negative. It is surely coincidental, but striking nonetheless, that Arteta slaps his hands together in frustration in exactly the same way, as evidenced when Fabian Delph gifted possession.

The turn to the bench in exasperation at questionable refereeing decisions looked familiar, too. A rub of the forehead when Lyon’s Maxwel Cornet and Nabil Fekir pounced on mistakes. You get the idea.

The pair have always been close despite the 11-year age gap. Arteta was invited to Sabener Strasse while Guardiola was at Bayern Munich to observe training and take notes as his days at Arsenal came to a close. 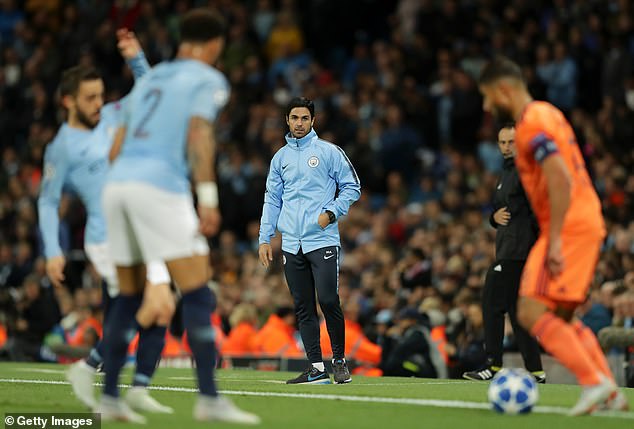 The former Arsenal midfielder was standing in for Guardiola, who served a touchline ban

There they gabbed about tactics and philosophies long into the night and that is no different now, two years into Arteta’s time at City. Deansgate’s Spanish restaurants are the scene these days.

All this is not to paint the 36-year-old as a teacher’s pet. He is the most vocal of Guardiola’s coaching team, and has undoubtedly freshened it up, often pulling the manager up like very few before him.

Raheem Sterling’s 23 goals last season and three already this are largely down to the extra hours spent in Arteta’s company after training.

It is out on the grass he thrives and it was certainly noticeable that, at 7:17pm on Wednesday night, Arteta was the first out on to the Etihad pitch alongside fellow coach Lorenzo Buenaventura.

Business as usual, clearly, until the disastrous evening began. He surveyed the warm-up arms folded, offering little last-minute words to David Silva and gesticulating at Kyle Walker to indicate how and where he should open Lyon up on the right. To no avail.

As a coach, he usually has a knack of communicating potentially tricky concepts in digestible language – probably because he only retired in 2016 – and that, along with his zippy training sessions, is a chief reason why City’s record-breaking squad had taken such a liking to him long before being appointed the new No 2 this summer. They will surely feel anger at themselves for letting him down.

After all, Arteta bounded into Monday’s press conference like someone relishing this opportunity and proceeded to claim this team is ‘the best in the world’.

Interestingly, he also labelled them ‘my players’. On Wednesday night they did not look like his or Guardiola’s.