Mikel Arteta has not given up hope that Arsenal can secure European football for next season after their late win at Crystal Palace.

The Gunners claimed three points at Selhurst Park on Wednesday night thanks to Gabriel Martinelli’s strike and Nicolas Pepe’s second of the evening in stoppage time.

Pepe had given Arsenal the lead but Christian Benteke pulled one back in Roy Hodgson’s final home game in charge of the Eagles. 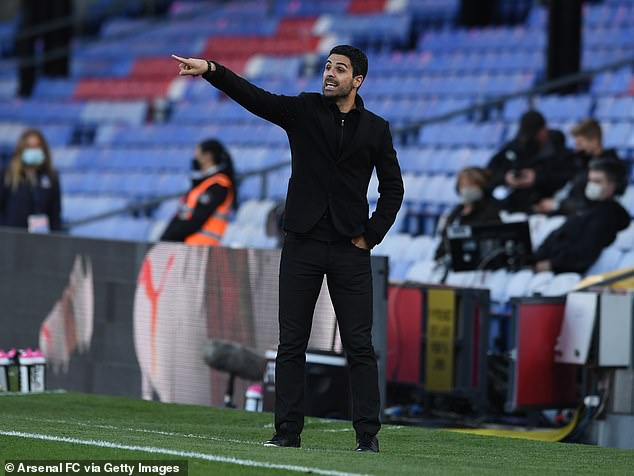 Arsenal produced another underwhelming display until their late blitz but Martinelli and Pepe’s goals gave them feint hope of finishing in the European spots.

But it can only be the Europa Conference League after sixth-placed West Ham’s victory at West Brom ensured they can no longer be caught by the Gunners.

Currently in ninth, Arteta’s side need to beat Brighton at home on Sunday and hope results elsewhere go their way with rivals Tottenham in seventh with a point advantage plus a superior goal difference.

Arteta said at full time: ‘We found a way to win. For a big part of the game we were in total control and playing the way we wanted to play.

‘We allowed them to play long balls, corners, free-kicks and against Palace that’s a dangerous game. We were in trouble.

‘We improved with our chances and Gabby managed to score a very important goal.

‘We will keep fighting right up to the last day, if someone said in November or December [a European finish] it looked impossible but we’ve been on a strong run these past six months and we deserve a chance to be there on the final day.’ 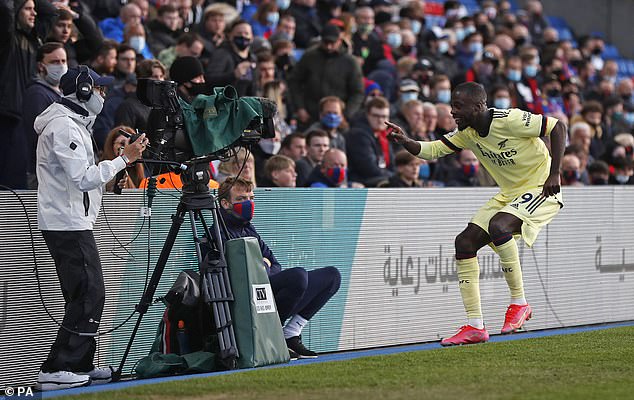 Arteta also heaped praise on Pepe as his good form in front of goal continued and he insisted the Ivorian has ‘come a long way this season’.

Following a smart one-two with Bukayo Saka, Kieran Tierney picked out Pepe in the six-yard area and he volleyed home for his 13th goal of the season.

After Martinelli had finished smartly past Vicente Guaita from close range in the first minute of stoppage time, Pepe then slotted home to seal the points for the visitors with the last kick of the game.

‘It’s my feeling and it’s everybody’s feeling in the coaching staff, and his own feeling that he’s come a long way this season,’ Arteta added.

‘He hasn’t had the consistency sometimes in the game time.

‘But I think in Europe he’s been terrific and in the Premier League he’s started to show much more what he’s like, and he’s very hungry.

‘I think he’s changed a lot in his mentality and his willingness to do much more.’