Mila Kunis has admitted she is still yet to watch a full episode of her hit series, That ’70s Show.

The 39-year-old actress famously made her name on the period sitcom show in 1998 after signing on to play Jackie Burkhart at the age of 14.

Despite starring on the Fox series for eight years, the star admitted in a recent interview that she has only seen snippets of her work in the popular program.

Blast from the past: Mila Kunis is yet to watch a full episode of her hit series, That ’70s Show 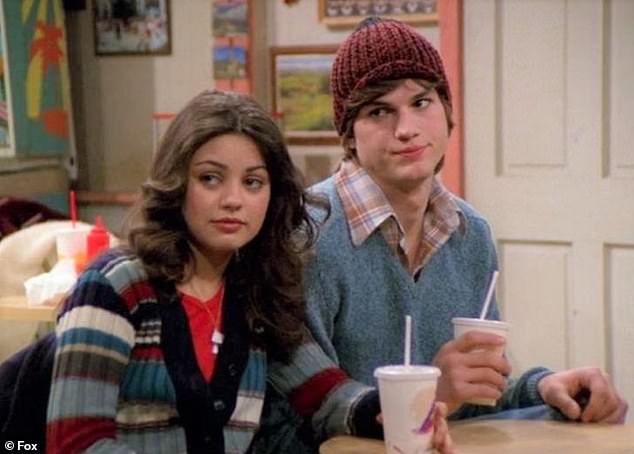 Throwback: The actress famously starred alongside her now-husband Ashton Kutcher as Jackie and Kelso

Speaking to Josh Horowitz during a live taping of the Happy Sad Confused podcast on September 29, Mila stated: ‘: I don’t watch reruns of ’70s for a reason… I don’t think I’ve ever seen a full episode of ’70s in my life.

Agreeing that it was weird to have a permanent reminder of her ‘awkward teenage years’ captured on television, the Luckiest Girl Alive actress admitted she would be curious enough to watch an episode now.

‘If it ever goes back to broadcast, and it ever comes on, then I think I’d watch,’ she mused.

It was nominated for five Emmys though it one just one of them during its run of nearly a decade.

A spin-off titled That ’80s Show was previously attempted. While not a direct spin-off, it did have a similar story structure and was made by much of the same creative team. 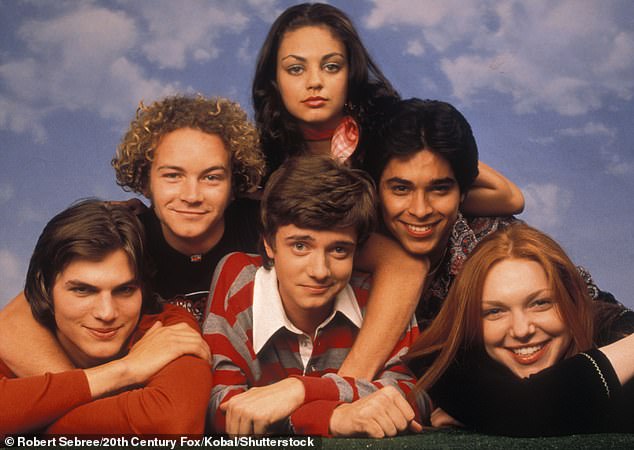 Back in April, it was confirmed that five of the six original stars would be making an appearance in the new 90s spinoff series.

The only main cast member not returning to their previous role is Danny Masterson who played Hyde for all eight seasons of the program. Masterson is preparing to stand trial on multiple allegations of sexual assault.

The star confirmed that the cameo she makes with her husband Ashton Kutcher will be a one-off for now.

‘For the first season, for sure. Honestly, you don’t wanna see us, the show’s not about us. I promise, it’s such a great move with what they did. If you love 70s, then you will love this. 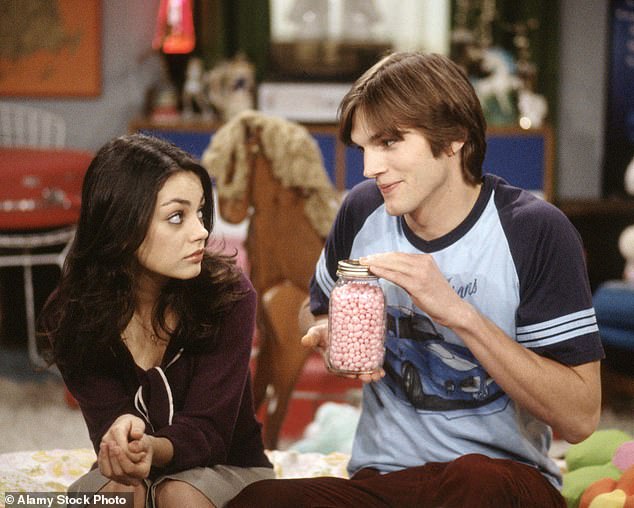 Fan favorites: Mila and Ashton played an on-screen couple during the show’s 200 episode run in the late 1990s and early 2000s on Fox 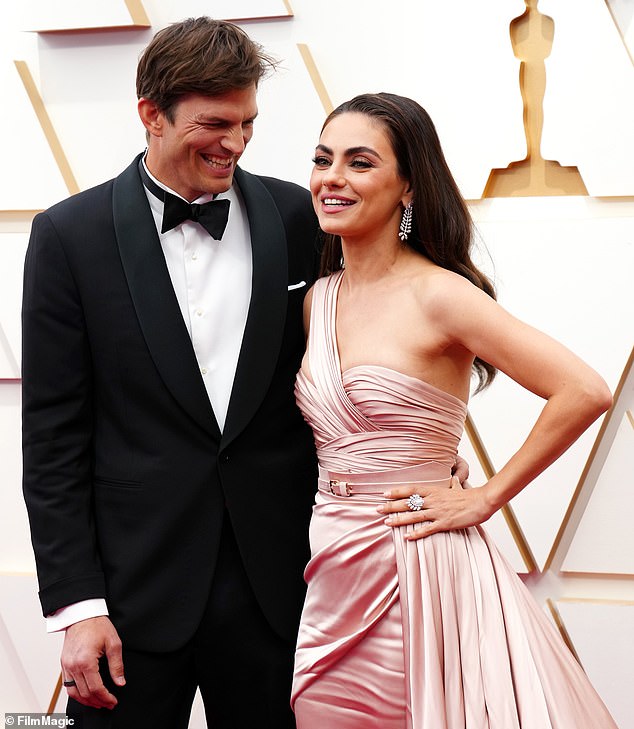 Happy ending: The pair did not spark a real romantic connection until 2012, and went on to tie the knot in 2015

‘If you’ve never seen 70s and you want to know more about the 90s, you’ll love it. It’s the same story, so it’s a relationship with these kids. Little misfit kids in the same basement in the same house but going through the 90s.’

The program will follow Eric and Donna’s daughter Leia, played by Callie Haverda, when she stays for the summer with her grandparents and hangs out with some of the local kids.

The actress both stars in and helped produce the flick, which is based on a 2015 novel of the same name by Jessica Knoll.

The book, whose author adapted it for the screen herself, follows a chic editor of a women’s magazine based in New York City. 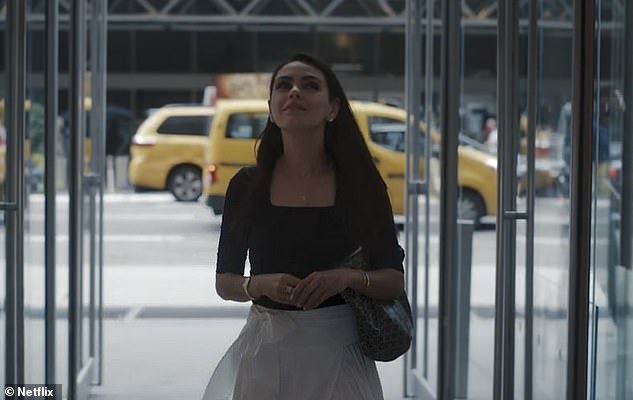 Mystery: Mila stars as a young woman who must deal with a mystery from her past in the upcoming film Luckiest Girl Alive

Her glossy life conceals the demons she is still suppressing, particularly those stemming from a school shooting she survived as a teenager.

When a true-crime documentarian dredges up her memories of the crime again, Mila’s character finds herself grappling with the trauma she attempted to bury.

Speaking at 92NY following a preview screening of the film, the Black Swan actress praised the streaming network for bringing the story to life.

‘To me what makes this one incredibly special and why I chose to do this because of two things; it is based on the writer’s life loosely based on the writers life,’ she explained to Josh Horowitz. ‘So there’s an element to it that you can’t argue can’t say “that can’t happen, that would never happen, that’s not how it would happen”. It is how it happened. That is what happened. And tome that that that has been important.’

Mila continued: ‘Then the other part of it is the writer who wrote the book, who also wrote the screenplay. Her voice is incredibly specific. This is a first screenplay that she’s ever written… She already got some amazing books out there that have been on the New York Times bestseller list, so she’s got a very specific cadence and a very specific tone. 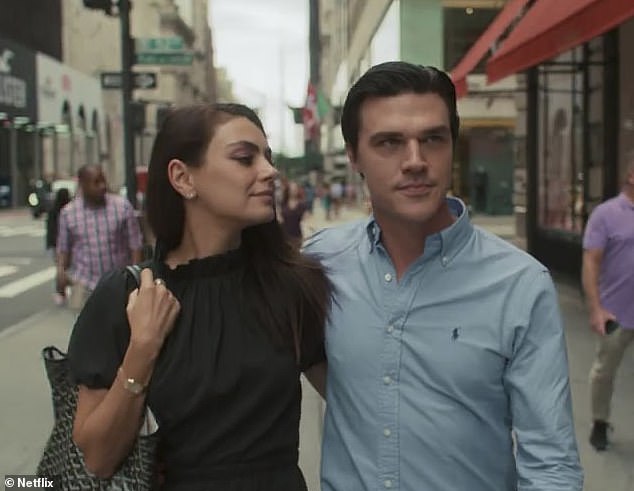 Perfect life: Mila plays Ani, a successful magazine editor who is engaged to Luke, a wealthy and handsome man, played by Finn Wittrock, 37

Unravels:  Ani’s life begins to unravel after a documentary filmmaker looks into an incident that took place at her prestigious high school where Ani was known as TifAni 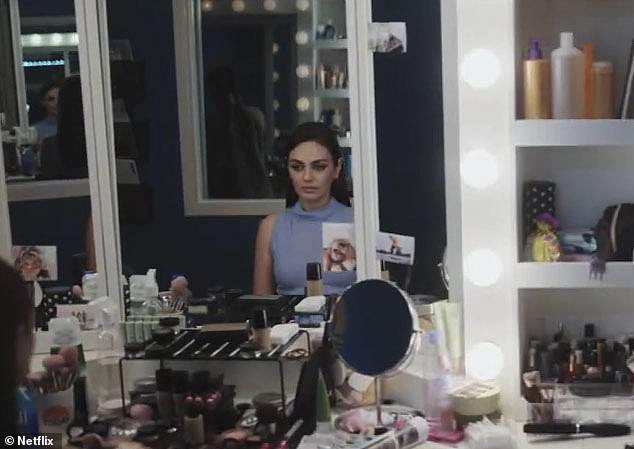 ‘A lot of it has to do with this voiceover element that she brings in to the film, it’s not just exposition. To have her in charge of the script with Netflix… that is a lot of people taking rightful risks.’

The star also revealed how her ability to work with the writer led to the flick ending being different compared to the novel.

She explained: ‘We changed the ending drastically… not drastically but I would say we modernized it.

‘When I read the original script, I was like, “I really I love this but let me talk to you a little bit more about life since you wrote the scripts. What other conditions have you gone through so that we can implement in this character and we can jump six or seven years and make it more relatable to today.” Not something that would be believable for seven years ago.’

Luckiest Girl Alive is available on Netflix from October 7.