By Afp and James Mills for MailOnline

Cars will be banned in Milan on Sunday to tackle dangerously high pollution levels and the city is also considering banning smoking at bus stops.

Italy is one of the most highly polluted country’s in Europe and dozens of towns and cities have suffered smog alerts this month.

Residents and tourists will be restricted to using bicycles, electric scooters and public transport in Milan on Sunday between 10am (9am GMT) and 6pm.

But fans will still be allowed to drive to the San Siro Stadium to watch AC Milan play Hellas Verona in the afternoon.

Residents and tourists will be restricted to using bicycles, electric scooters and public transport in Milan on Sunday between 10am (9am GMT) and 6pm 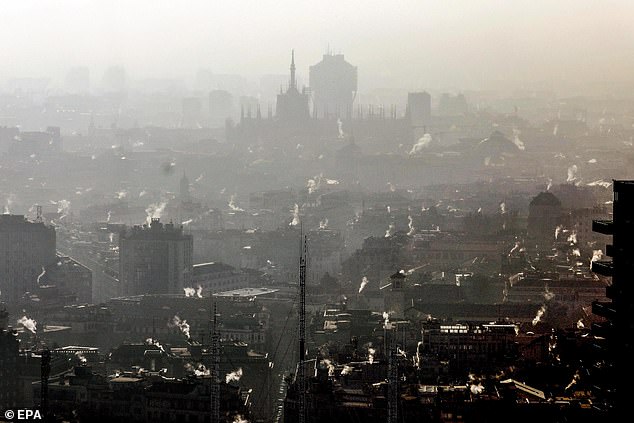 Italy is one of the most highly polluted country’s in Europe and dozens of towns and cities have suffered smog alerts this month. This was Milan on January 8

The driving ban was criticised by some, including Raffaele Cattaneo, the regional councilor for the environment, calling it ‘demagogy in salsa green and short-sighted measures with a limited horizon.’

Milan’s mayor Beppe Sala has himself acknowledged the measure would not solve the city’s pollution problem in the long-term.

Earlier this month, Sala proposed that smoking be banned at bus and tram stops, part of a wider plan to ban smoking outright in open spaces by 2030.

It will be submitted to the city council in March.

But Cattaneo said cigarette smoke constitutes a mere 1.9 per cent of environmental emissions. 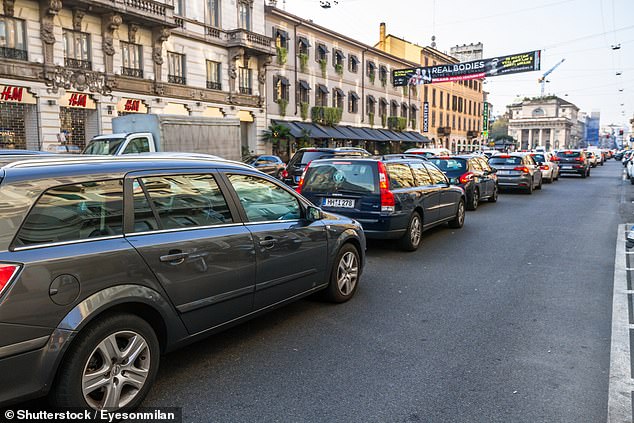 Traffic pollution is a major problem in Italian towns and cities. Pictured: a morning traffic jam near Porta Venezia District in Milan 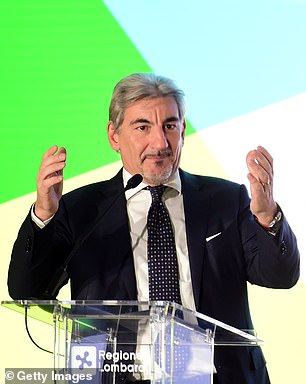 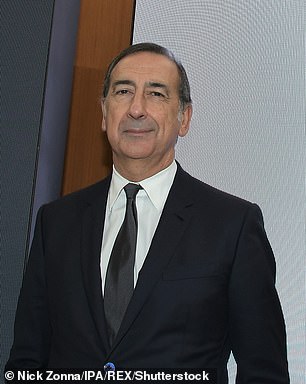 Raffaele Cattaneo (left), the regional councilor for the environment, called the ban ‘demagogy in salsa green’.  Mayor Beppe Sala (right) is also considering a ban on smoking at bus stops

Smog has been a recurring problem in Italy’s industrial north, especially in Milan and neighbouring Turin, and previous authorities have often turned to banning cars.

A European Court of Auditors report published in September 2018 found that cars were a ‘major source of urban air pollution’ in Milan and that the most effective measure would be to limit their use.

Three weeks ago, more than a dozen cities and towns across Italy introduced traffic curbs in a bid to cut harmful emissions following a spike in pollution.

A prolonged period of sunny weather with little rain or wind pushed up air pollution across the country, triggering smog alerts in more than 60 municipalities.

Officials in the northeastern city of Turin, home to Italian automaker Fiat, banned cars built before 2013 from taking to the roads, as did at least 11 other municipalities in the surrounding Piedmont region. 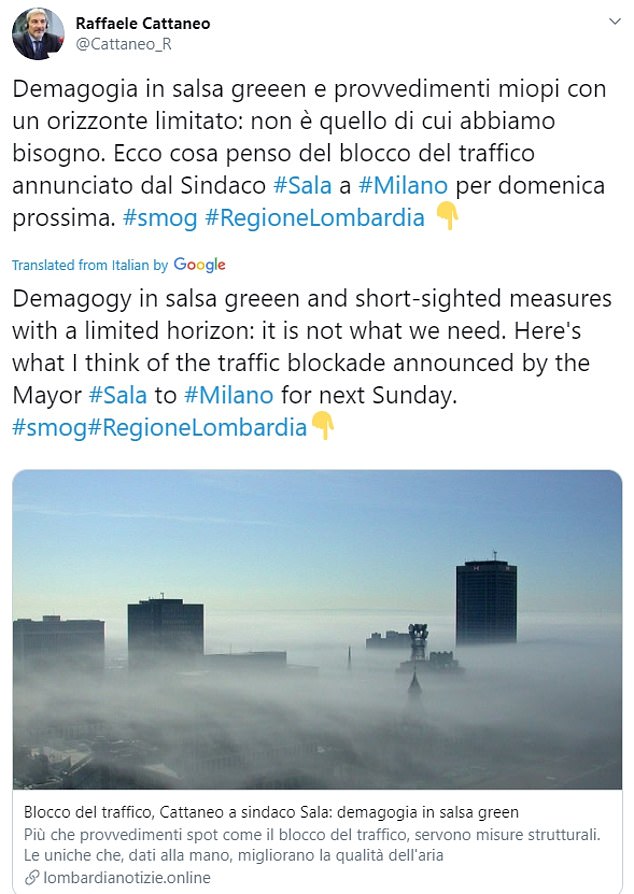 Raffaele Cattaneo (left), the regional councilor for the environment, called the ban ‘demagogy in salsa green’ on Twitter

Cities and towns in the neighbouring region of Lombardy, including Milan, also announced similar curbs for January 8, but subsequently temporarily lifted the order because a public transport strike risked leaving locals stranded.

Heating systems and car emissions were blamed for the bubble of smog.

Further south, the Tuscan city of Florence and seven nearby towns banned highly polluting vehicles from their streets for five days.

The Air Quality Index showed Italy was one of the most highly polluted places in western Europe on January 8.

Many of the more populous areas posted levels deemed unhealthy, with a top reading of 170 registered in Tuscany.

But Italy was still considerably better off than large swathes of Asia, with the Indian capital Delhi, one of the world’s most polluted cities, scoring above 300 on the index.