Mile high madness: Moment brawl erupts between British passengers on EasyJet night-flight to Ibiza after woman ‘who had been drinking before and during journey’ comes to blows with man’s girlfriend

Shocking footage shows a mass brawl break out on an EasyJet flight – after a drunk woman allegedly flashed her breasts and did cartwheels down the aisle.

A group of passengers can be seen grappling and clambering over each other during the trip from Luton to Ibiza.

Violence erupted after the intoxicated female allegedly gave lap dances to the men beside her then tapped people’s heads as she strolled down the plane.

The woman, wearing a black and white t-shirt and leggings, can be seen lashing out at the passengers sitting behind her.

One of the women she is hitting is said to have slapped her hand away when she tapped her on the head.

A man, thought to be the boyfriend of the woman she tapped, is seen trying to wrestle her away.

The jaw-dropping clip was filmed by passenger Josh.

He told Unilad: ‘We got on the plane and her friends were all seated at the back, and she was at the front amongst guys who were giving her more drink.

‘She was up lap-dancing on them and she got her boobs out, and she was a mess the whole time. She was also doing cartwheels down the aisle of the plane.’ 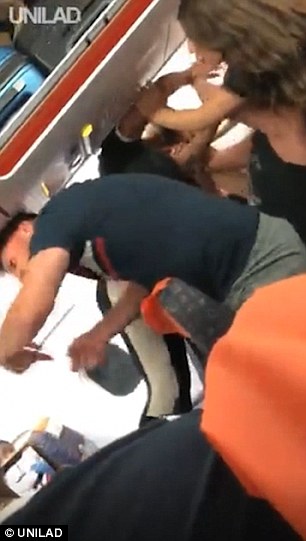 Passengers step in to calm the woman down. She writhes around and tries to wrestle herself free

EasyJet told MailOnline: ‘EasyJet can confirm that a group of passengers were escorted off flight EZY2095 from Luton to Ibiza on August 2 by the police on arrival as a result of behaving in a disruptive manner.

‘The safety and welfare of our passengers and crew is easyJet’s highest priority. EasyJet’s crew are trained to assess and evaluate all incidents.

‘Whilst such incidents are rare, we take them very seriously do not tolerate abusive or threatening behaviour onboard and always push for prosecution.’